Kodi Lee soared to greatness performing Freya Ridings’ single Lost Without You on Tuesday’s episode of America’s Got Talent, the first of season 14’s two-part finale.

‘Kodi! Kodi! Kodi!’ the crowd chanted, giving a standing ovation to the 22-year-old contestant born blind and autistic, who sang and played piano like a seasoned professional.

Judge Gabrielle Union, 46, had given Kodi her golden buzzer on an earlier show—and she congratulated herself on that choice, praising his performance with tears in her eyes.

Standing ovation: Kodi Lee soared to greatness performing Freya Ridings’ single Lost Without You on Tuesday’s episode of America’s Got Talent as the finalists performed

‘Kodi has changed the world,’ she said. ‘He changes every room he enters. And when he said, ”I would be lost without you,” I think the whole world would be lost if we had not found Kodi Lee.’

Her fellow judges, Simon Cowell, 55, and Howie Mandel, 63, predicted Kodi would win the show, and the $1 million prize.

‘One of the most beautiful things I’ve ever, ever heard,’ said Simon, who closed his eyes throughout the performance. ‘That was as good as I’ve ever heard.’

‘This show was meant for me,’ Kodi affirmed in an interview before he went onstage. ‘I love performing. I have music in my head, and [want to] show my talent to the world.’ 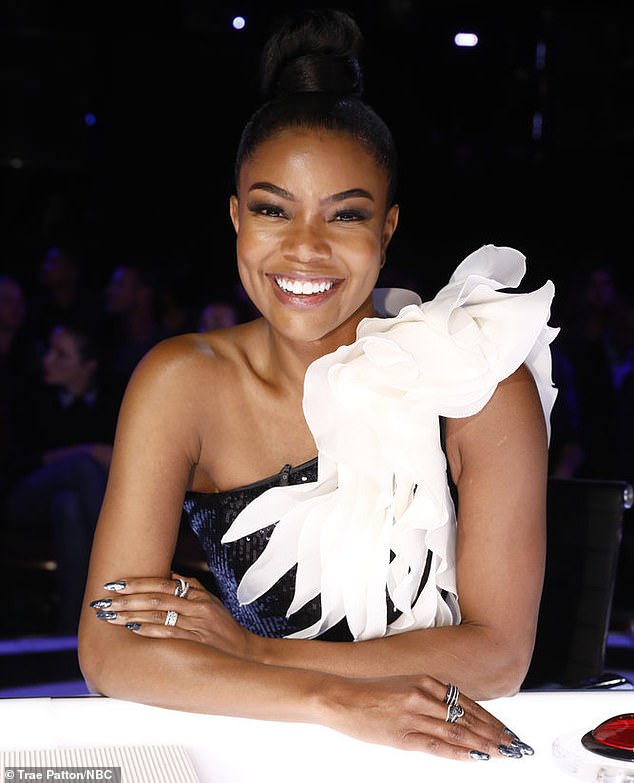 When he felt frustrated, music made him feel better, he said, noting: ‘I tell people I love them through my songs.’

Just 10 acts performed on the episode, and any of them could be winners, Simon said.

‘Every one of these acts has been an inspiration,’ he admitted. ‘But what they’ve got to do is convince the audience at home that they are going to change their lives.’ 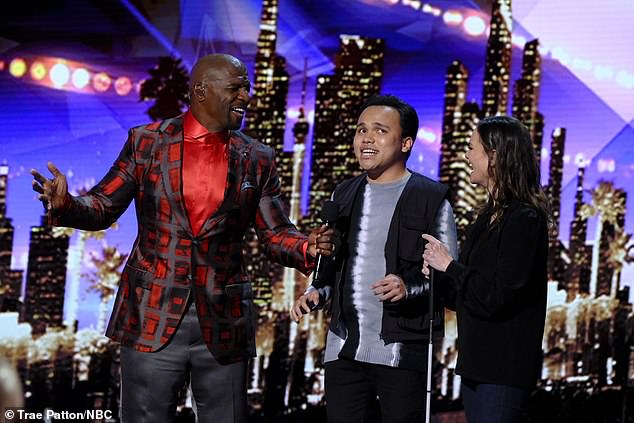 Fan favorite: Terry Crews interviewed the autistic and blind singer who has become a fan favorite 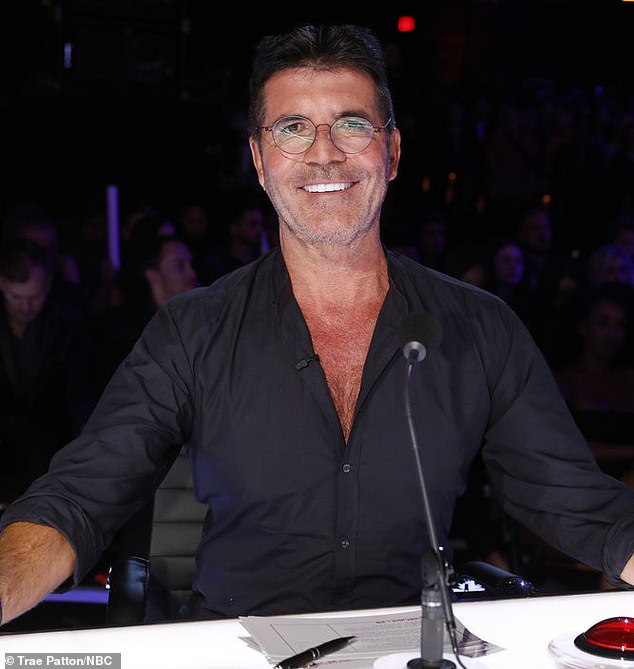 High praise: Simon Cowell said Kodi’s performance was, ‘One of the most beautiful things I’ve ever, ever heard’

Over the course of season 14, AGT acts had earned more than 2.5 billion views online.

One of the most popular, V. Unbeatable, a dance troupe from Mumbai, was up first.

Its 28 members, ages 12 to 27, had worked hard to rebound after the death of co-founder Vikas (the V in the group’s name), who suffered a fatal accident during a dance practice. 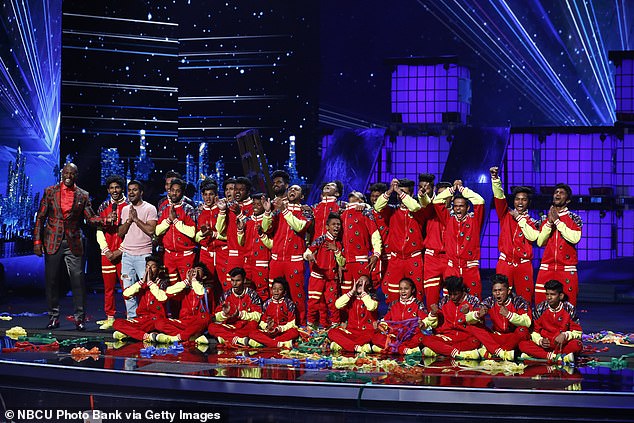 Dance troupe: One of the most popular acts, V. Unbeatable, a dance troupe from Mumbai, was up first

‘Being on AGT is life-changing, and that was Vikas’ dream for all of us,’ one man said.

Once again, the judges loved their propulsive, colorful dance, set against a blacklight, which featured death-defying jumps from terrifying heights and made the crowd scream.

‘This is the most exciting, the most dangerous, the most thrilling act in the history of AGT,’ Howie raved, pointing out. ‘The V in [Vikas’] name also stands for the V for Victory.’ 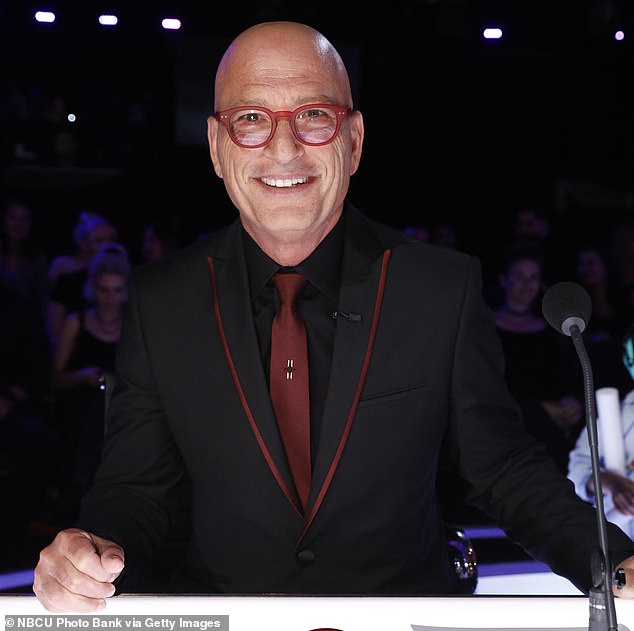 Most exciting: Howie Mandel declared that V Unbeatable was the ‘most exciting’ act ever on AGT

‘You are not a dance group,’ Simon added. ‘You are a movement. A game-changer.’

Up next was host Terry Crews’ golden buzzer, the Detroit Youth Choir, singing, dancing and rapping to a mix that included Macklemore and Ryan Lewis’ 2011 hit Can’t Hold Us.

‘People from Detroit know how to fight back despite the obstacles in their way,’ said one member in a video before their set, dedicating their song to choir director Anthony White. 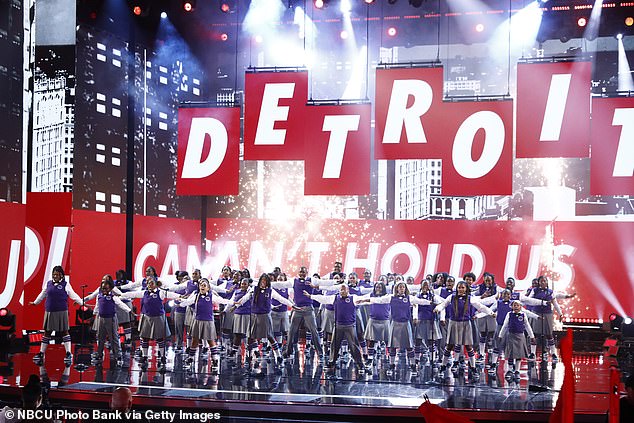 ‘You represented all the excellence in so many people that gets overlooked,’ Gabrielle told the group, whose members ranged from 8 to 18 . ‘You guys shined so bright on that stage.’

‘There really is no ceiling for you guys,’ affirmed judge Julianne Hough, 31, pointing out that Mr. White had taken pains to give each member an individual spotlight during the song.

On the eve of her 11th birthday, singer Emanne Beasha brought her angelic pipes to La Momma Morta, from the 19th century opera Andrea Chénier, which Maria Callas made famous. 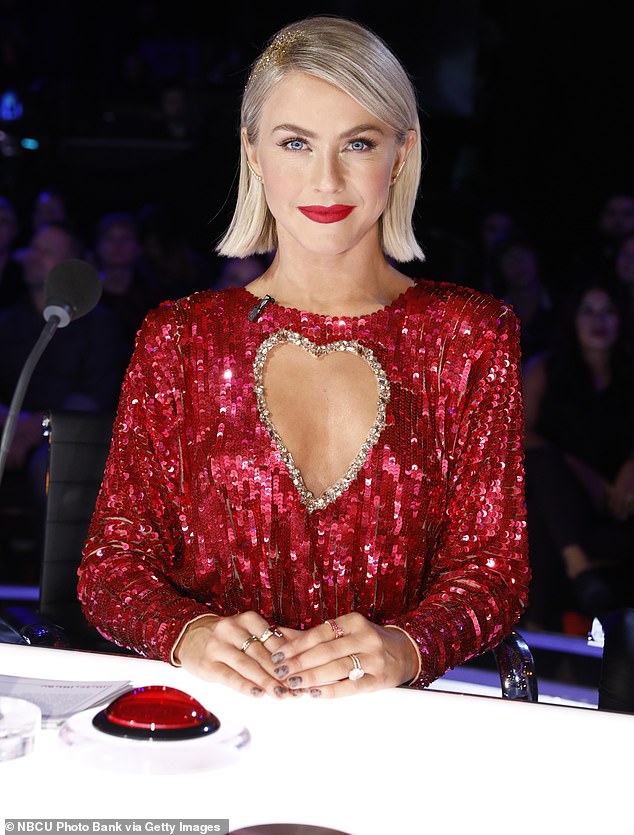 ‘I feel like the stars are aligning in this moment,’ said Emanne, a North Port, Florida, resident, who brought her favorite stuffed animal to the show for luck.

‘Tonight is the biggest performance of my life. My dreams are so close to coming true, and I’m going to give it everything that I got.’

After she sang, the judges sat in stunned awe for a moment before responding. 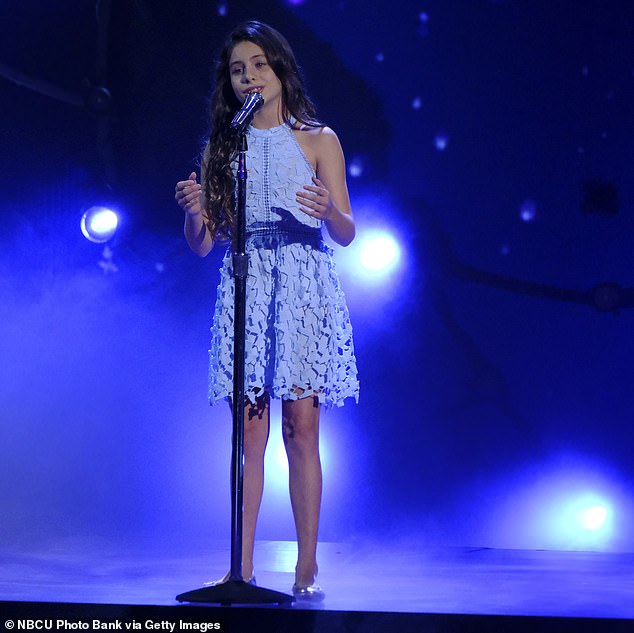 ‘That talent is extraordinary,’ Simon relayed. ‘I’ve never heard the song before—doesn’t matter. You have the most incredible, incredible voice. My God, do you deserve to be here tonight.’

In a change of pace, comedian Ryan Niemiller followed the singers.

Before he went on, he showed viewers a glimpse of life at home with his family, who joked that Ryan owed them money and always made them tie his shoes. 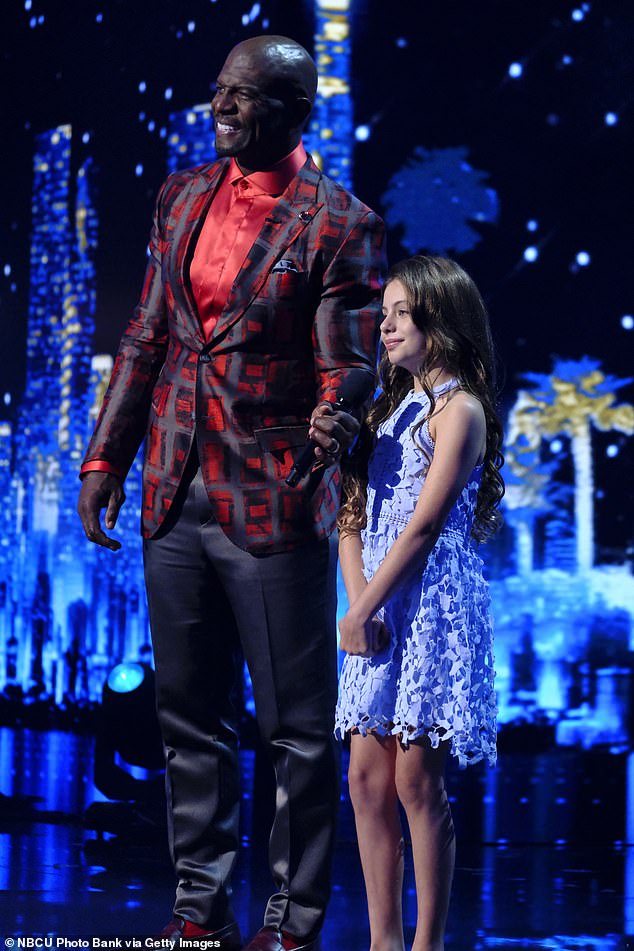 In awe: The judges were in awe and Simon told Emanne that her talent was ‘extraordinary’

‘I’m really, really proud of you,’ his mom said. ‘I know you’re where you want to be, and that means more than anything.’

Born with severely shortened arms, Ryan described being called ‘cripple threat,’ having people avoid shaking his hands, and hearing that his life makes strangers feel better about their own. 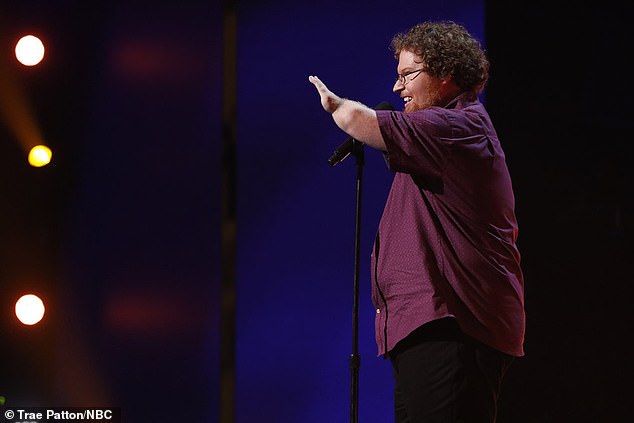 Stand-up comic: Ryan Niemiller followed the singers and joked about being called a ‘cripple threat’

‘I couldn’t stop a woman on the street and say, ”Ma’am, you know what? I was having a pretty rough day”,’ he joked. ‘I wasn’t feeling like a very attractive person. Then I saw you.’

‘There has to be somebody watching this show tonight who is going to make like The Hangover 6 … I want you to consider Ryan,’ Simon said. ‘Give him the part and the break he deserves.’

‘I have a production company,’ Gabrielle noted. ‘I want you to be a star in one of my movies.’ 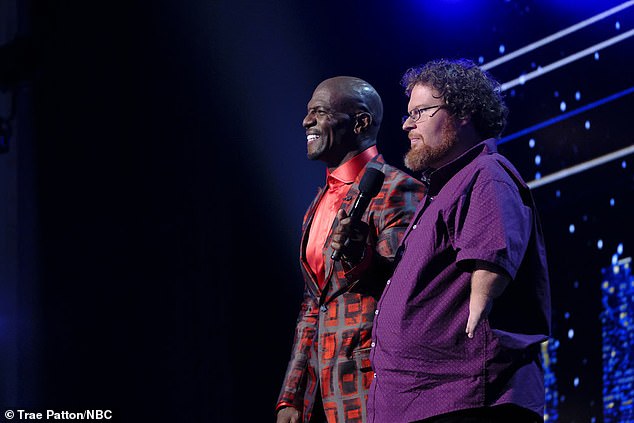 Voices Of Service, a singing quartet made up of ex-military members, then performed Leona Lewis’ 2007 tune Footprints In The Sand.

Members first read letters from veterans who spoke about their trauma, depression and loss, saying ‘y’all have been a light in the darkness’ and noting the group filled them with ‘pride.’

‘You are instruments of feeling, and you are beyond this stage,’ Gabrielle announced after listening to them sing. ‘You are brilliant, absolutely brilliant.’ 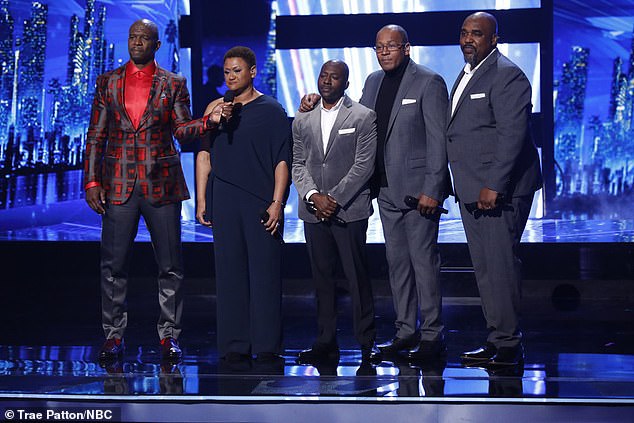 Powerful performance: Voices Of Service, a singing quartet made up of ex-military members, then performed Leona Lewis’ 2007 tune Footprints In The Sand

‘We have an opportunity as artists to bring people joy and hope, and that is what you guys do,’ explained a teary Julianne. ‘Thank you for using your talent to help people feel seen.’

Light Balance Kids, the Ukrainian LED dance group, blew the crowd away with their blacklight set, which found them dancing to DNCE’s 2016 hit Cake By The Ocean around fast food restaurants.

One of the group’s members, Dennis, was rejoining the group after a long stint in the hospital with an unnamed illness, and it had them feeling stronger than ever. 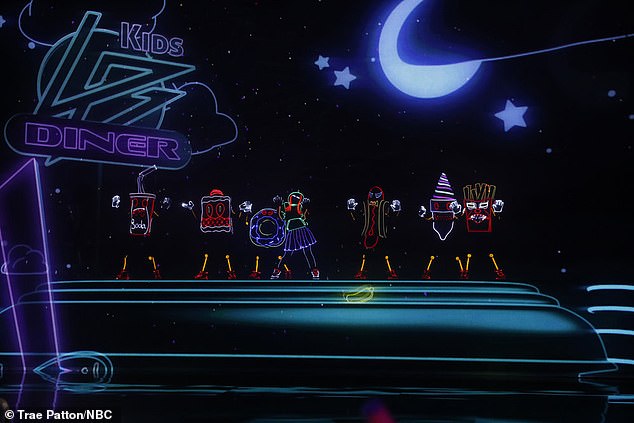 ‘We use each other’s light suits to help us find our way,’ his fellow member said. ‘And if one person is missing, all of us feel lost… [but] when we are together, we can do anything.’

‘Well, well done,’ Julianne praised them. ‘You knocked it out of the park.’

‘When it mattered, tonight, you pulled out the best performance you have done,’ Simon said. 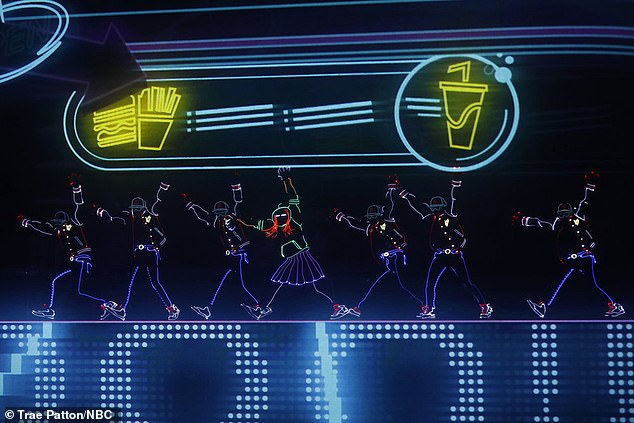 Full strength: One of the group’s members, Dennis, was rejoining the group after a long stint in the hospital with an unnamed illness, and it had them feeling stronger than ever

Young singer Benicio Bryant, who followed them, had watched AGT since he was a year old, and once again debuted a new original song, ‘Six Strings (Because of You).’

In a video, he was shown celebrating his 15th birthday, and traced his interest in different aspects of music to different performers across the seasons of AGT.

‘Through all of my birthdays, and all of the seasons of the show, I never really thought that I would be here,’ he said. ‘Maybe my wish will come true.’ 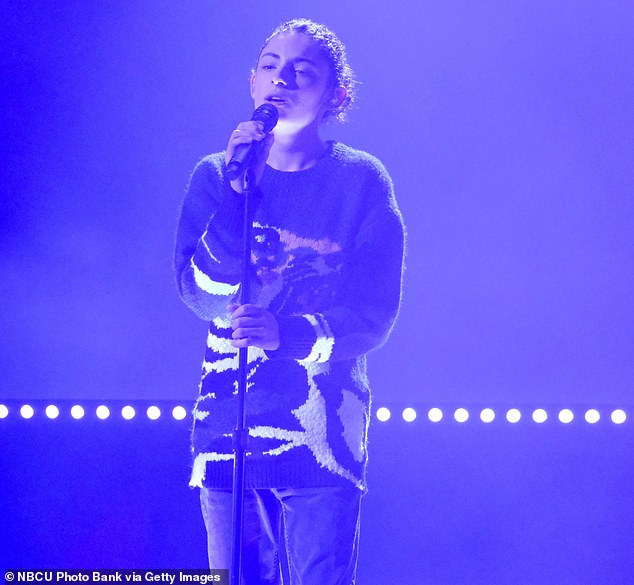 Teen talent: Young singer Benicio Bryant, who followed them, had watched AGT since he was a year old, and once again debuted a new original song, ‘Six Strings (Because of You)

Julianne was spellbound, saying afterward: ‘It was just you, your voice and a guitar,’ and praising his ability to hold viewers’ attention without bells and whistles.

‘That is when you know you are a star,’ she concluded.

‘You have gained my absolute respect, and given yourself a real shot after that,’ Simon agreed. 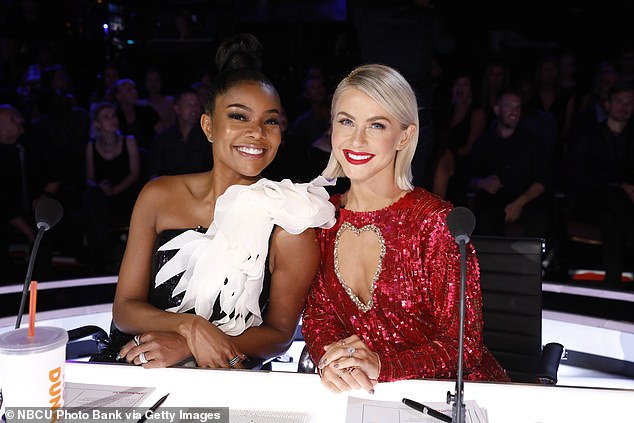 New judges: Gabrielle and Julianne joined the show as new judges this season

Violinist Tyler Butler-Figueroa, 11, next rocked the room with a cover of Destiny’s Child’s 2001 classic, Survivor, which went from sweet to fierce in a matter of seconds.

Before his performance, the leukemia survivor sat with his mom in the backyard of his home, watching a video of other children with cancer who had been inspired by his success.

The crowd gave him a standing ovation, moved by his passion for the song. 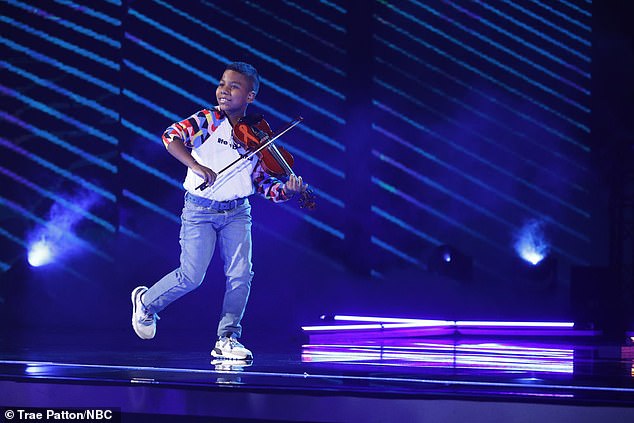 Leukemia survivor: Tyler Butler-Figueroa impressed yet again with his violin

‘Bursting with pride for you right now,’ Simon remarked, announcing that Beyoncé had personally cleared the song for Tyler to perform. ‘You’ve got a shot here.’

‘You were absolutely incredible,’ Gabrielle crowed.

Last up was the Ndlovu Youth Choir, from South Africa, which got everyone in the room bouncing up and down with their ebullient cover of Toto’s 1982 classic Africa. 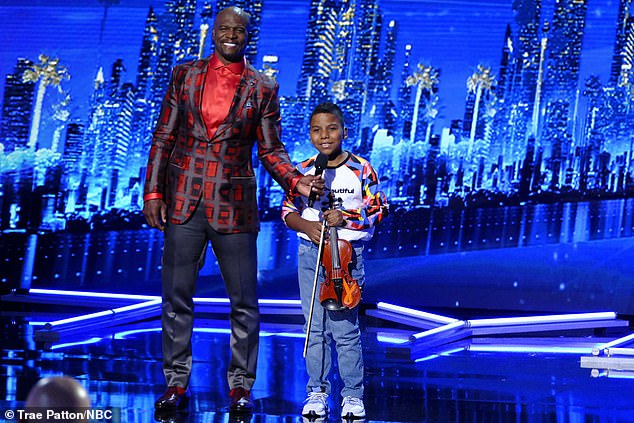 Song approval: Simon remarked that Beyoncé had personally cleared the song for Tyler to perform

‘These kids come from a difficult background and have been through many hardships, but when a child first comes to the choir the most beautiful thing happens,’ said choir director Ralf Schmitt. ‘They lift their head, they fill their lungs with air and they shout out to the world.’

‘We may be far, far from home, but our community is with us,’ one member said.

Julianne and Gabrielle danced throughout the song, clapping along with the entire audience. 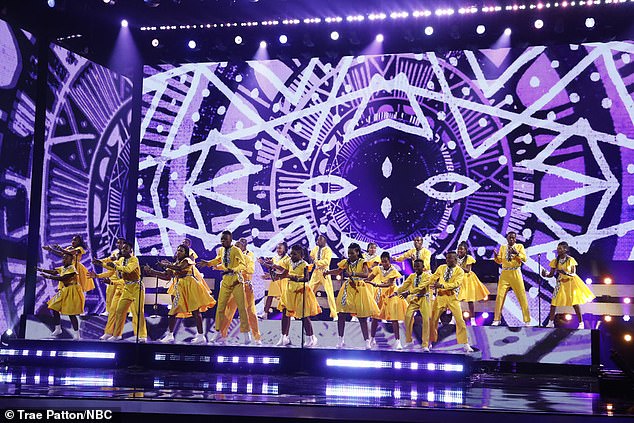 Final act: Last up was the Ndlovu Youth Choir from South Africa

‘I pray that this show can change peoples’ lives, and I think that performance may have done it,’ Simon attested, calling it the best final he had ‘ever sat on in [his] life.’

‘If you can dream it, you can do it,’ Julianne cheered.

The winner of AGT will be announced on Wednesday during the second part of the season finale. 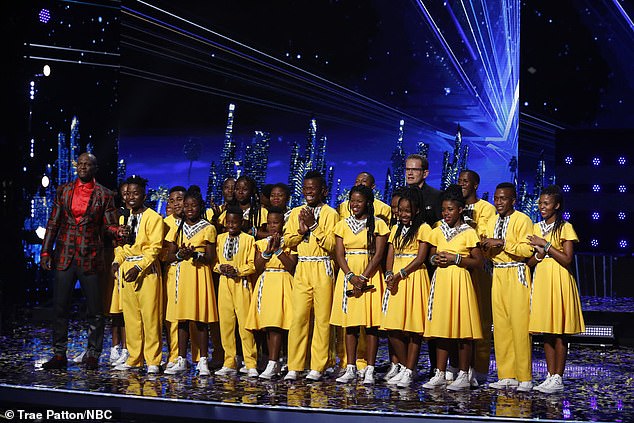 Youth choir: The group got everyone in the room bouncing up and down with their ebullient cover of Toto’s 1982 classic Africa