Simon Cowell pushed his Golden Buzzer for 11-year-old violinist Tyler Butler-Figueroa on America’s Got Talent on Tuesday sending him straight through to the live rounds.

The Raleigh, North Carolina resident, a cancer survivor, strode onto the stage wearing light-up shoes and amazed the crowd with a rocking version of the Kelly Clarkson song Stronger.

Tyler said he’d been inspired to take up the violin at age 7 1/2 after being bullied in school for having leukemia and losing his hair.

Kids made fun of him, spreading rumors that he was contagious and urging each other to stay away from him. But a chance sighting of an ad for free violin lessons changed his life.

‘I just didn’t want to be the kid with cancer, so now I’m the kid who plays the violin,’ Tyler said.

‘Once he started that class, it was like a sunshine,’ his mother explained. ‘He was full of energy, happy. I was like, ‘Oh my God, I got my son back.’ 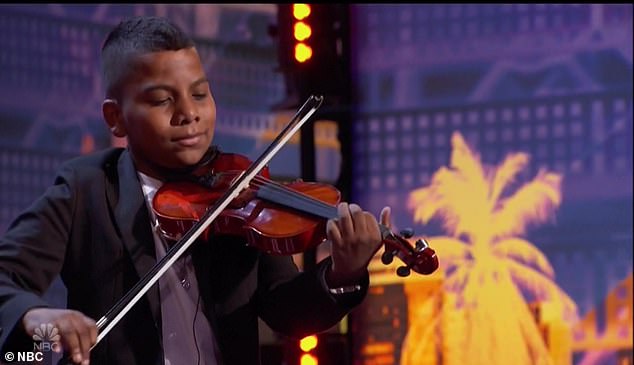 Cancer survivor: Tyler said he’d been inspired to take up the violin at age 7 1/2 after being bullied in school for having leukemia and losing his hair 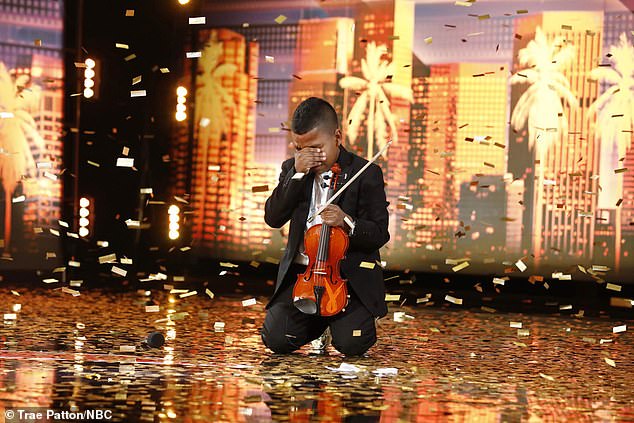 Emotional moment: The boy fell to his knees after Simon pushed his Golden Buzzer sending confetti dropping to the floor

‘How are you feeling now?’ Simon asked, inquiring about his cancer.

The crowd was moved. 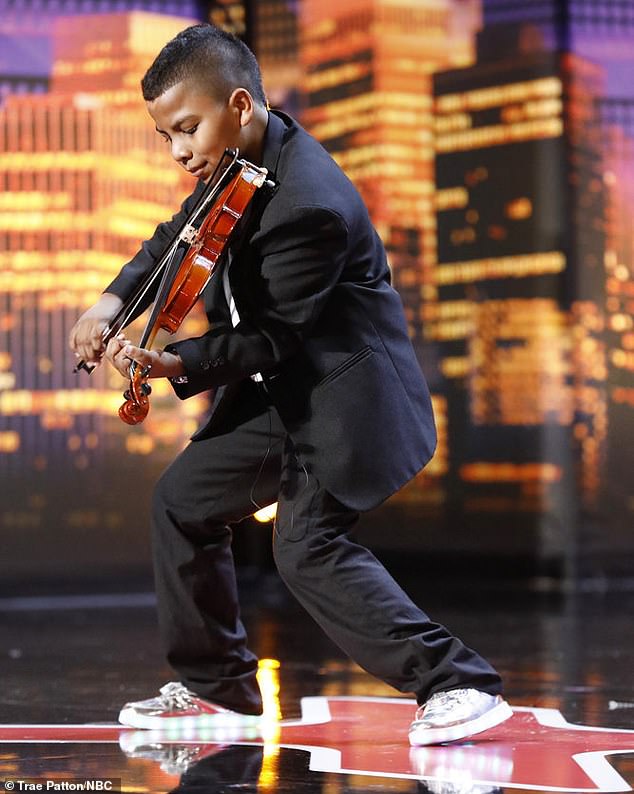 ‘We hear too many stories about people being bullied, but I can tell you one thing,’ said Simon. ‘Most people are bullied because they’re better than the people who bully them.’

‘I think you have such an amazing talent, such a personality—and I would like to say something on your behalf to the bullies,’ the judge added, reaching over to slam the golden buzzer.

Tyler’s mother jumped for joy. Her son ran to the side of the stage and hugged her. 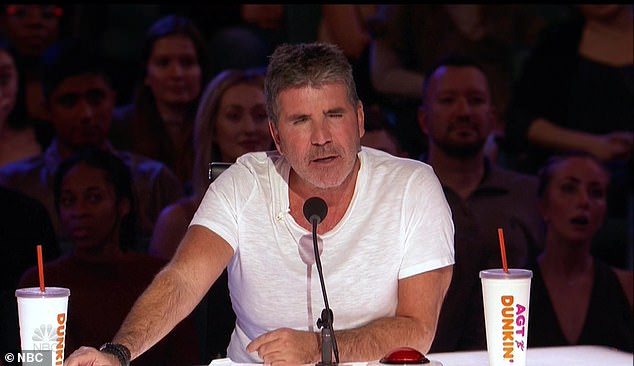 Anti bullying: Simon told Tyler that people are bullied because they’re better than the people who bully them 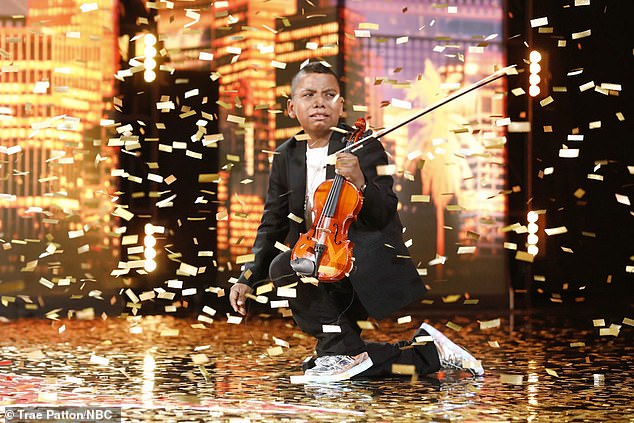 Confetti falling: Tyler was near tears as confetti fell from the ceiling

Simon joined them onstage as the golden confetti fell.

‘You’re a winner right?’ he asked Tyler, now in remission for four years. ‘Can I shake your hand? Enjoy every moment of this.’

Tyler wasn’t the only young person to make an impression on the judges during the evening’s auditions. 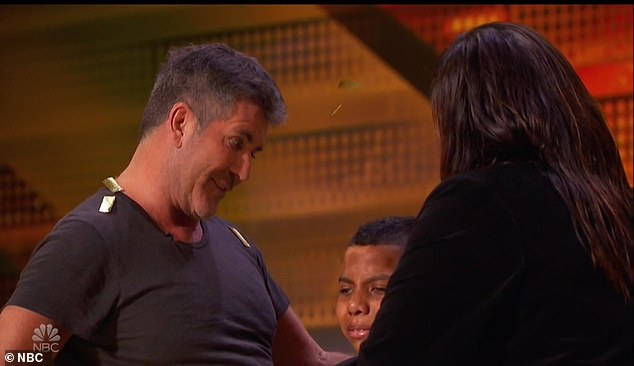 Proud moment: Simon was proud of Tyler after his performance 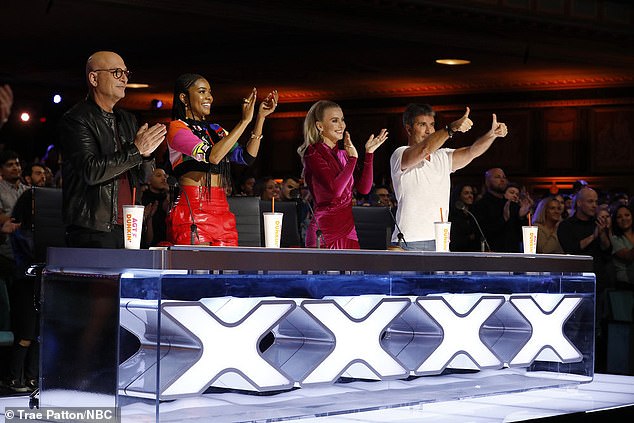 Husky-voiced Charlotte Summers, 13, an AGT superfan, came all the way from Marbella, Spain, where she and her sister Renee liked to watch the show and share an abiding love for Simon.

‘What was in your head when you woke up today?’ Simon asked.

‘Meeting you, Simon—you’re my idol, literally—I love you so much,’ she said. 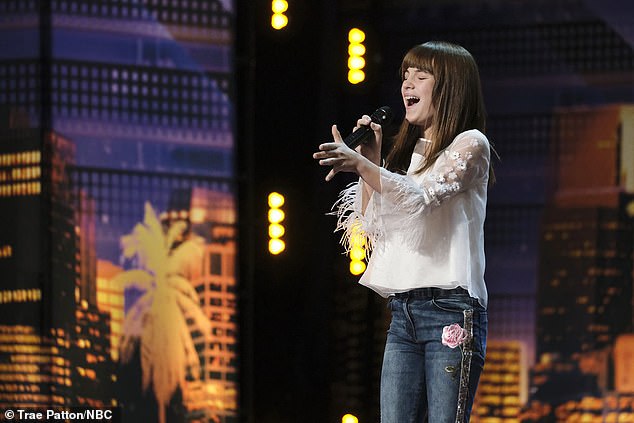 Big fan: Charlotte Summers, 13, an AGT superfan, came all the way from Marbella, Spain to audition

He reminded her about the $1 million prize. ‘What would you do with the money?’ he queried.

Thoroughly charmed, the judges encouraged her to share her talent.

She sang a raspy, deep version of the Screamin’ Jay Hawkins’ 1956 hit I Put a Spell on You, sounding decades older than your years. 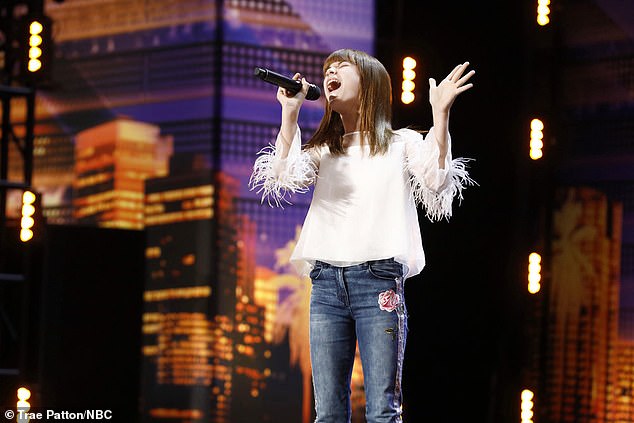 Nailed it: The teenager sang a raspy, deep version of the Screamin’ Jay Hawkins’ 1956 hit I Put a Spell on You, sounding decades older than your years

‘She put a spell on me,’ said judge Howie Mandel, 63, giving her first of four yeses.

Australian magician Don Chambers, 26, was inspired to be a magician by his grandfather, who had taught him magic tricks as a way to bond with him when he was six years old.

It wasn’t a glamorous life, he admitted.

‘I’ve done shows where no one has watched,’ Don noted. ‘I’ve done shows in the pouring rain. I have endless horror stories, and it got to the point where I questioned if magic was a thing that I really wanted to do.’ 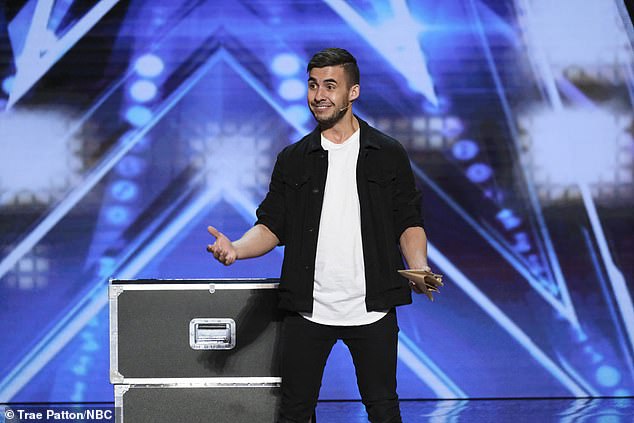 He even performed at a funeral once—after asking how much it paid.

But his grandfather’s recent passing reignited the flame, he said, reminding him of the love for the art they once shared.

Don had the crowd laughing as he produced bottles of beer from an empty bag, his shoe, and his jacket—and turned a miniature bottle of wine into the real thing with just a flick of his hand. 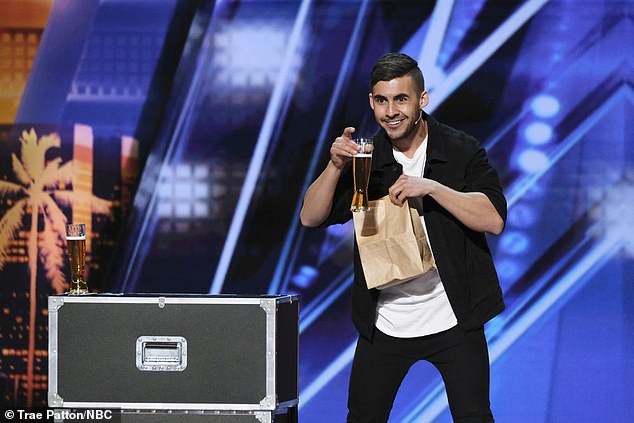 Beers appear: The magician kept making beer appear out of a bag

‘You absolutely crushed it,’ said judge Julianne Hough, 30, before the judges sent him through. ‘I thought that was so fun.’

Los Angeles-based singer McKenzie, 31, performed Prince’s Nothing Compares 2 U as a tribute to his wife of one year, Denise, saying that it was a song about what love really is.

McKenzie had to drop out of music school for lack of funds, but he met his wife there. 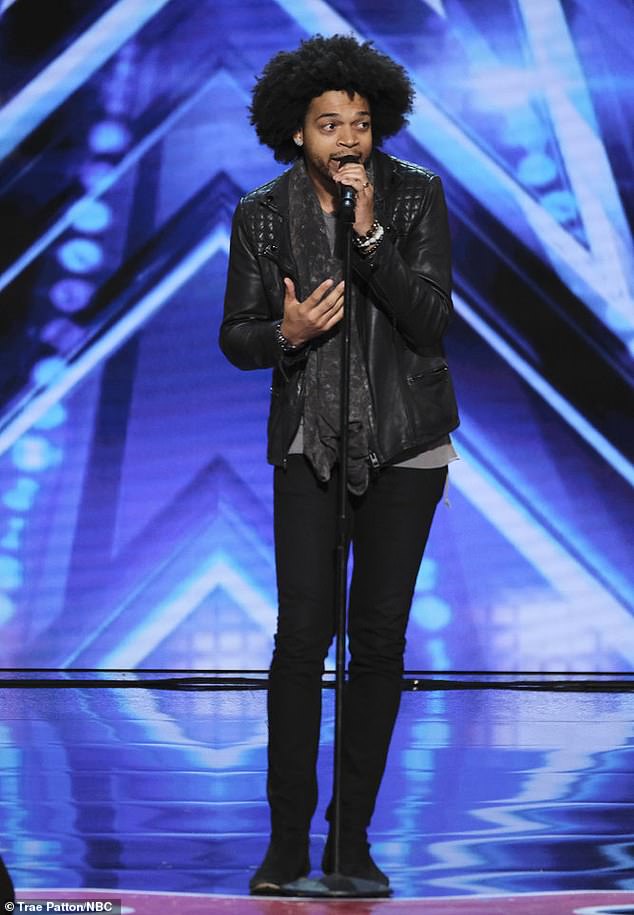 ‘I always dreamed of being a musician, but I had to get a 9 to 5 job, and when you know you’re supposed to be doing something else it can get hard,’ he said.

His wife gave him some advice before he went out.

‘She told me that I was a star and to shine bright,’ he told the crowd. 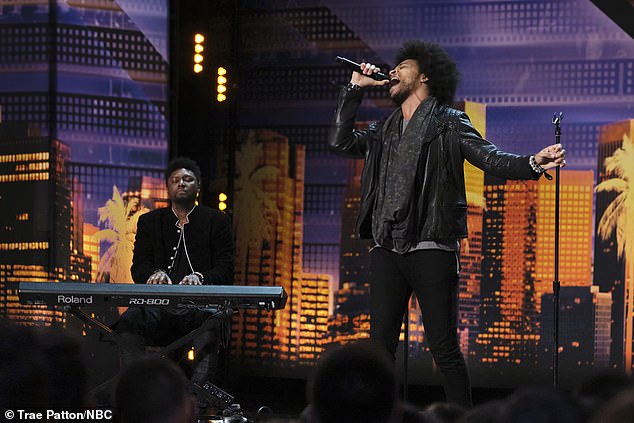 Shining bright: The singer dedicated the song to his wife

They loved his soulful, sultry performance of the song.

‘You took a classic song by a classic artist and kind of made it your own,’ Howie said.

The judges demanded that he bring his wife up on stage, and the crowd cheered as they kissed. 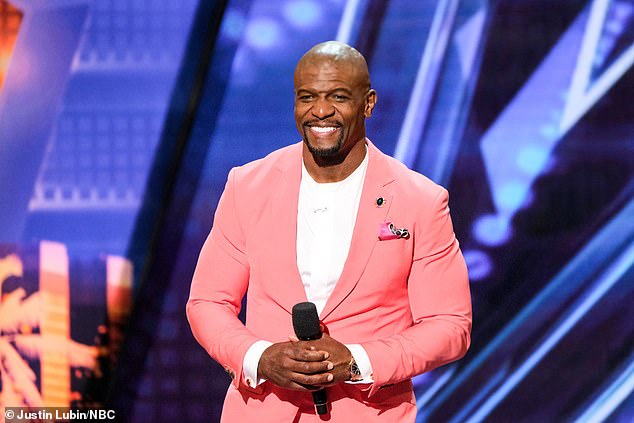 On the other end of the spectrum, but with not such a different story, was 55-year-old former background singer Carmen Carter, from Los Angeles.

She’d almost had a big career years before, she said, but producers thought she was ‘too fat.’

‘I just kind of went in the background after that,’ she added.

Her rendition of INXS’ 1988 tune Never Tear Us Apart had the crowd on its feet, with Gabrielle spontaneously rising and flinging up her hand with joy. 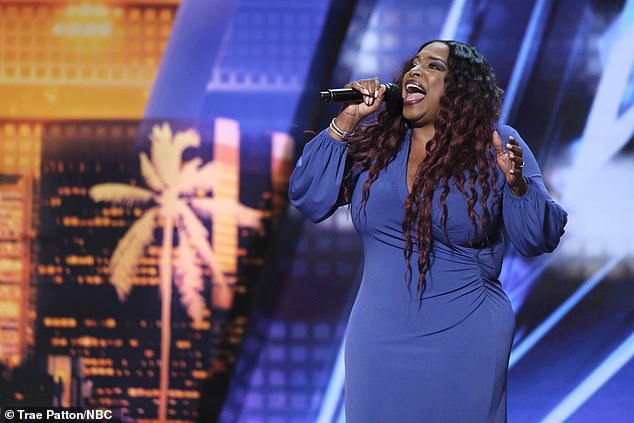 Sweet rendition: Carmen Carter, from Los Angeles, belted out a sweet rendition of INXS’ 1988 tune Never Tear Us Apart that had the crowd on its feet

‘Hallelujah!’ she said after Carter finished. ‘Your voice is a gift and a blessing, and you are a star. Nobody will ever put baby in a corner ever again.’

‘There has never been a person who has ever bought a record they loved based on how old or how big the artist is,’ Simon pointed out. ‘You didn’t come out here as a victim, you came out here to prove a point—and 4,000 people gave you a standing ovation.’ 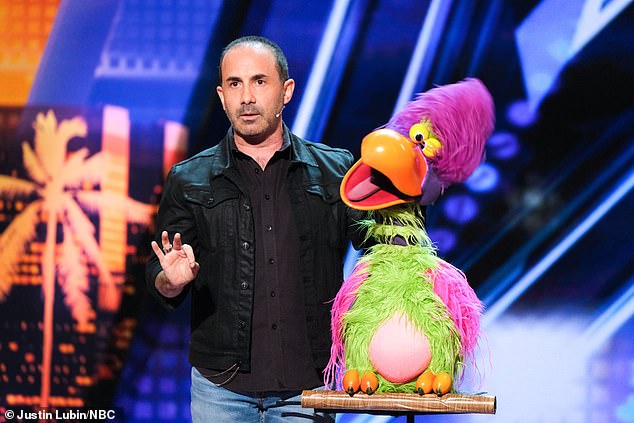 ‘You kind of appeal to five-year-olds and me, 75-year-olds,’ said Simon, mentioning that his son Eric, 5, would love it. ‘It was fantastic.’

Madison, Wisconsin resident Kevin Schwartz, 49, faced enormous odds to be on the show.

Once agoraphobic, he had tried to doing stand-up as a way to get out of the house, but arrived on the AGT stage practically immobilized by nerves. 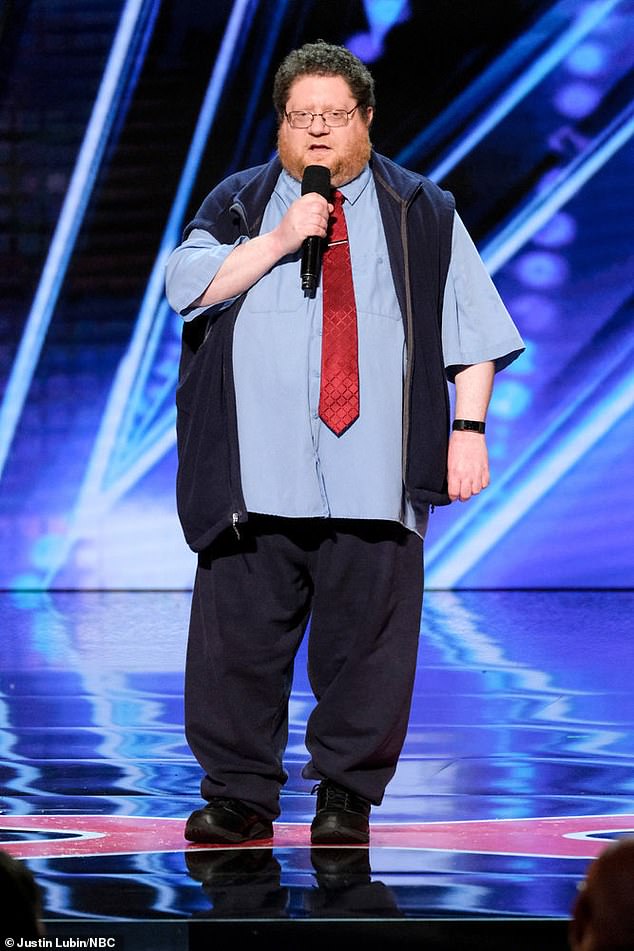 Very nervous: Madison, Wisconsin resident Kevin Schwartz, 49, faced enormous odds to be on the show and was nearly immobilized by nerves

Calling himself a ‘dorky, unathletic nerd’ as a kid, he said his interest in comedy was ‘a way of trying to take back control.’

His jokes, all one-liners, were brilliant.

‘Today I saw twin pandas. That bears repeating,’ he said.

‘I used to have a problem with grammatical tenses, but not yet,’ he added.

‘Isaac Newton died a virgin. That means I have one over on History’s Greatest scientific genius… because I’m not dead,’ he threw in, to thunderous applause. 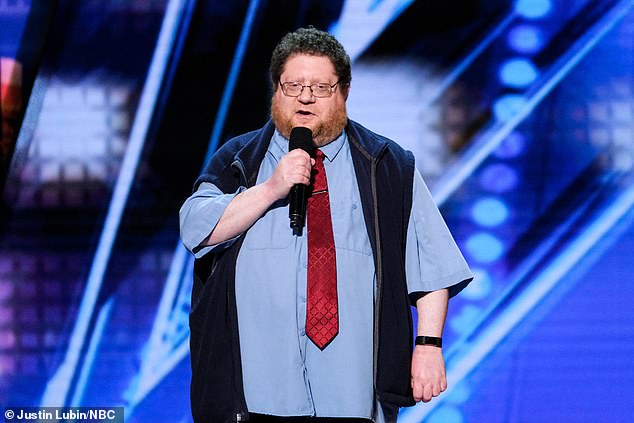 ‘You’ve got to know you’re a star,’ said Gabrielle.

‘I love you, and welcome out of the house,’ offered Howie. 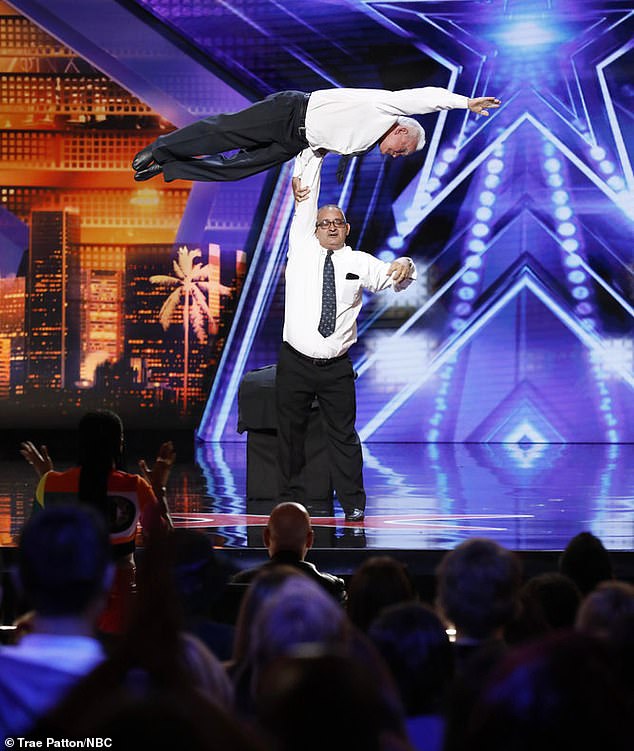 But they stunned the crowd with their agility, as the younger man lifted the elder with one hand, rising from prone to standing position as he did so.

‘This was a surprise,’ Simon agreed before sending them through. ‘It’s exactly why we created the show, to find people like you. This is genuinely one of my favorite acts.’ 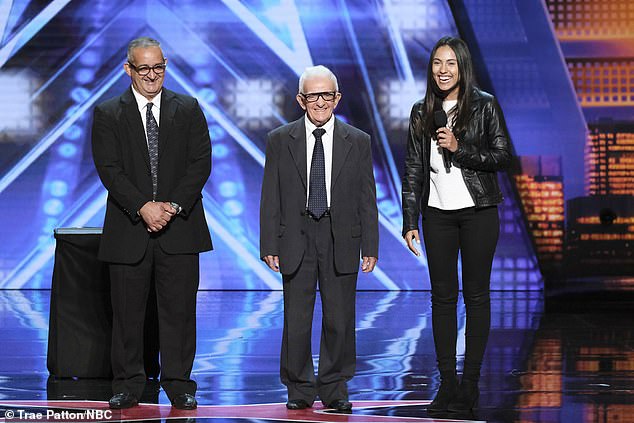 Surprise routine: Simon was pleasantly surprised by the routine and voted to send them through

Marina, a 21-year-old contortionist and dancer from Ukraine had everyone gaping in amazement as she unfurled her body to the strains of Chic’s 1978 hit Le Freak. She, too, was sent through by the judges.

Not so lucky was a 30-year-old Los Angeles-based performer known as Sethward–who had been rejected in a past season for performing an odd spoken act in caterpillar costume.

‘America’s Got Talent was this huge opportunity I felt like I had blown,’ he said, explaining that he had gone back to nature for more inspiration. 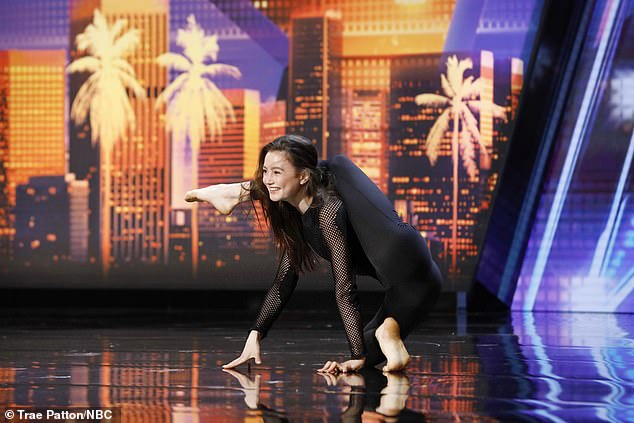 Having fun: Marina Mazepa  smiled while performing her contortionist routine

It didn’t work. Returning in costume as a giraffe with an oddly short neck, he failed to garner support from the judges.

Worse, as they cast him off, he stretched out his neck and fell over onstage, banging his head until host Terry Crews, 50, dragged him off.

He came back as a walrus, jumping on balls from ever higher heights, only to repeatedly fall and hit his head, once even faling and rolling off stage. 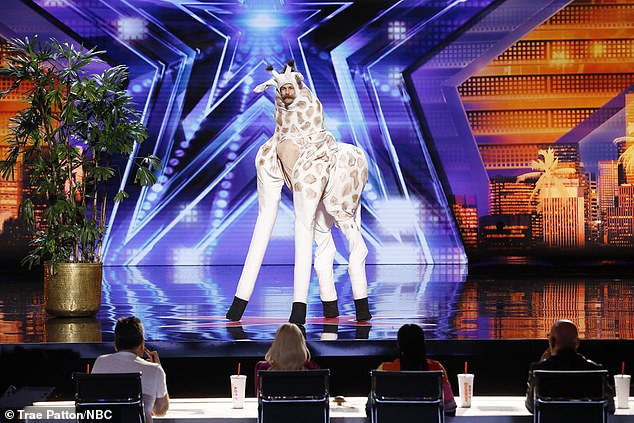 Nice try: Sethward was back as a giraffe but got buzzed off the stage

The act was so bizarre that it garnered some laughs—and a ‘yes’ from Howie and Simon.

‘I’m going to be totally honest with you,’ said Howie. ‘At first I didn’t get it, but I’ve changed my mind. It is ridiculous, but I happen to love you, and I think America is going to love you.’

‘I thought it was fantastically stupid, but I liked it,’ Simon agreed. ‘Well done for having the guts to come back, because this one actually got me. I’m going to say yes.’

She said ‘no,’ and he crawled off the stage. 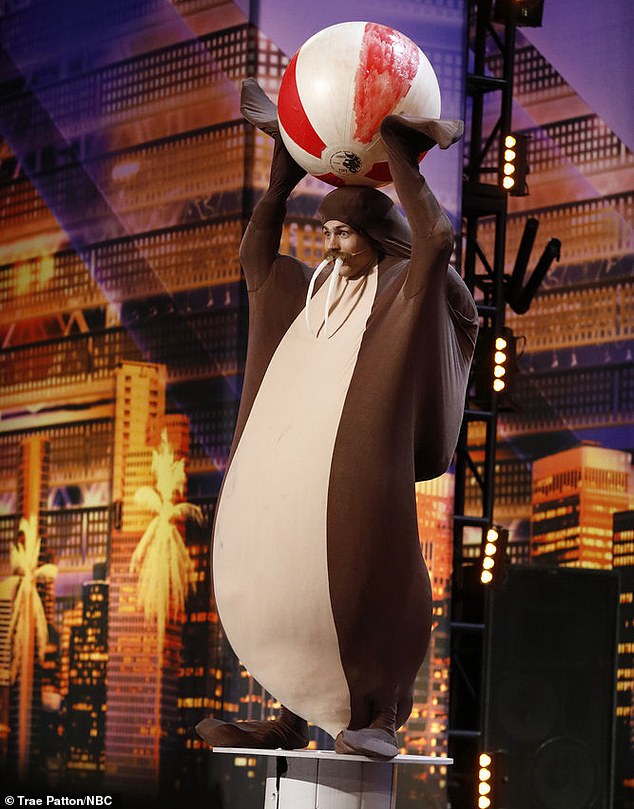 Once again: The performer came back as a walrus but still failed to advance