Howie Mandel used his Golden Buzzer on Monday to send dance group V Unbeatable through to the finals on America’s Got Talent: The Champions.

The Mumbai, India-based dancers wowed the judges with their kinetic, high-flying routine, running up walls, somersaulting backward, and throwing each other around.

When they got the buzzer, host Terry Crews, 51, asked the group’s leader how they felt being put through and his answer moved everyone.

Golden buzzer: Howie Mandel used his golden buzzer on Monday’s episode of America’s Got Talent: The Champions to send V Unbeatable from Mumbai, India straight to the finals

‘This moment is going to be there with us in our last breath,’ he testified.

V Unbeatable had been devastated when they failed to make it beyond fourth place on last year’s AGT, and they put everything they had into their return to the stage.

After their performance, the entire crowd was on its feet, applauding and Terry was rendered nearly speechless, saying only, ‘That was insane. That was insane.’

Howie, 64, a longtime fan of the group, dragged out the moment in which he pressed the buzzer, knowing how much it meant to the dancers. 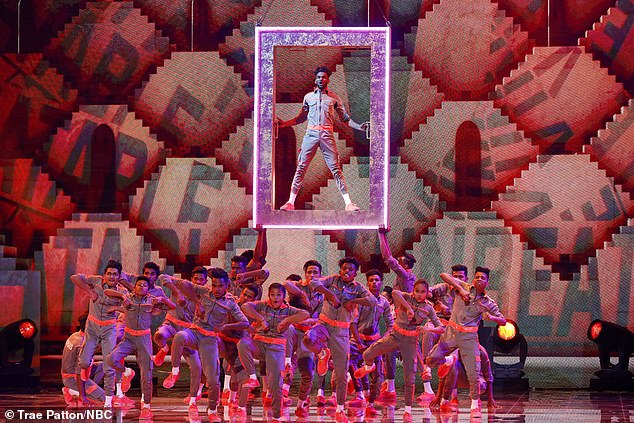 ‘This is the moment,’ Howie then announced, standing up from his chair and coming around to the front of the stage, as the troupe’s members jumped up and down. ‘This is the moment you have been waiting for. Just sit there and think about this moment.’

He pressed the buzzer, and everyone in V. Unbeatable nearly lost their minds. 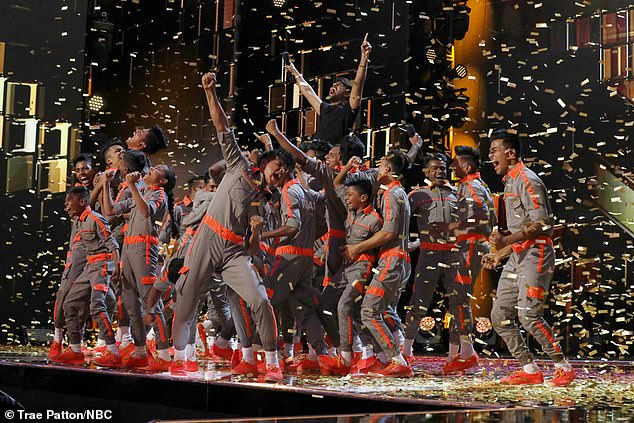 The moment: The dancers celebrated as confetti fell after Howie hit his golden buzzer 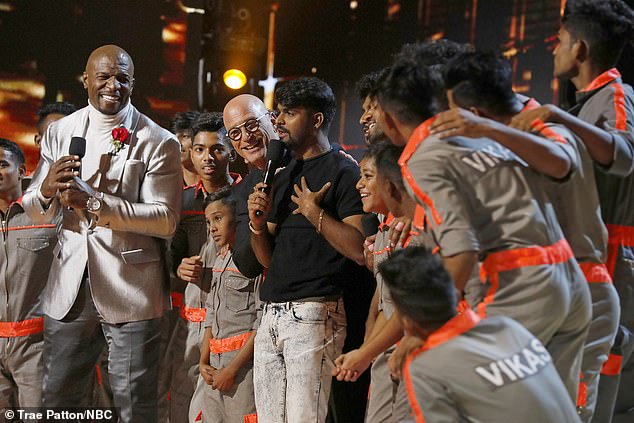 Special moment: The leader of the group talked about their disappointment after finishing in fourth place on the last season of America’s Got Talent

Most of the members of the dance live in the Mumbai slums, so losing last year’s AGT was particularly upsetting to them, the group’s leader said.

‘In that moment, we felt like our dream was broken,’ he recalled. ‘It was really painful for us, because we thought we let down our families. We let down our country.’

‘But when we flew back to India, everyone was like, ”Don’t be sad. You are the pride of our country”.’ 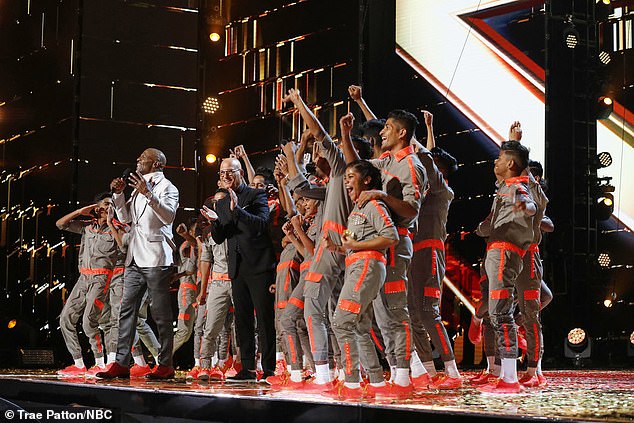 Since their last AGT appearance, V Unbeatable has played live shows in Las Vegas and other areas of the US and India, and there’s a movie coming out about their journey.

Howie called the group ‘probably one of the most exciting, best acts I’ve ever seen in my history as a judge.’

‘I loved it,’ judge Heidi Klum, 46, said after their performance. ‘So much adrenaline. It was kind of like you were a living kaleidoscope, and right in front of us.’ 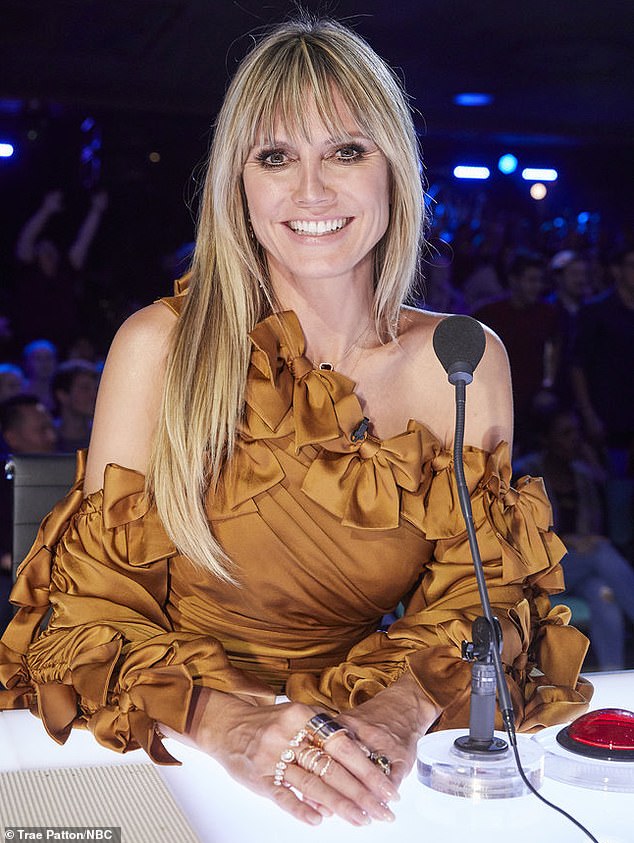 AGT superfans then voted violinist Tyler Butler-Figueroa, 12, and acrobatic group Duo Destiny through to the semifinals.

And at the end of the show, 11-year-old Alexa Lauenberger was the judges’ choice, having impressed them with her astounding dog act. 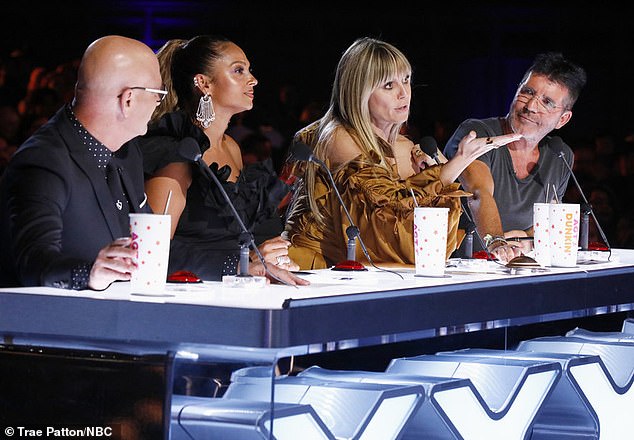 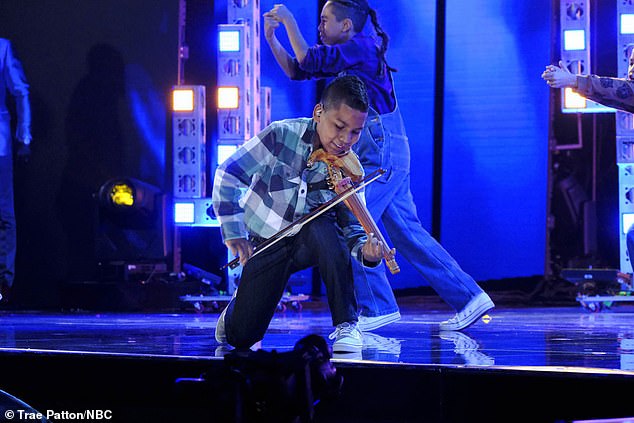 Moving forward: Tyler Butler-Figueroa was advanced by superfans across the nation 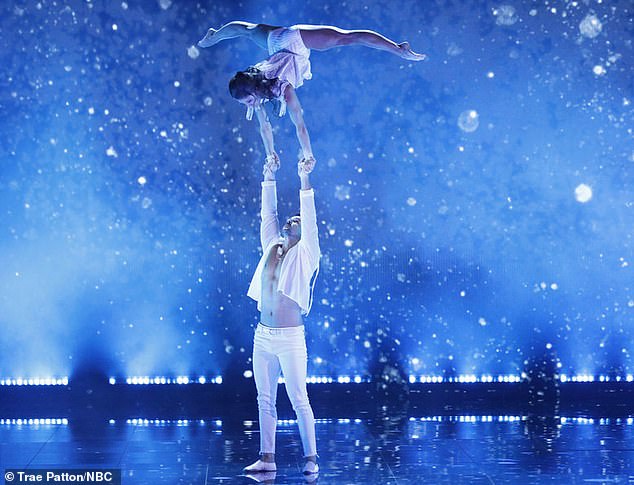 Next round: Duo Destiny also advanced to the semifinals based on voting by superfans

Alexa, the winner of Germany’s Got Talent 2017, had her eight dogs jumping through hoops, forming a conga line, and creating a bridge all to the Pointer Sister’s 1983 hit Jump (For My Love).

Her dogs had become superstars, Alexa noted, adding: ‘I won before, and I can do it again.’

‘This is why this show is called ‘Champions,’ Howie marveled after she finished. ‘I’ve never seen a person your age have such control and such professionalism.’ 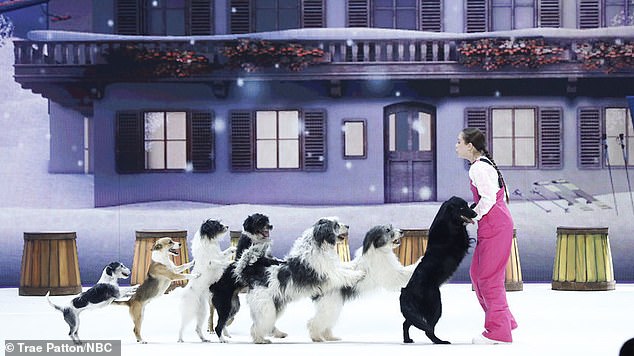 Dog act: Alexa Lauenberger, 11, was the judges’ choice, having impressed them with her astounding dog act

‘To me, it was like being in a real-life movie,’ added Simon, a noted dog lover. ‘I thought it was incredible.’

Alexa was immediately followed by Tyler, a talented violinist from Raleigh, North Carolina, who had earned Simon’s Golden Buzzer on AGT last year.

In his pre-show video, Tyler’s mother described her son as a ‘fighter,’ noting that he was diagnosed at age 4½ with acute lymphoblastic leukemia. 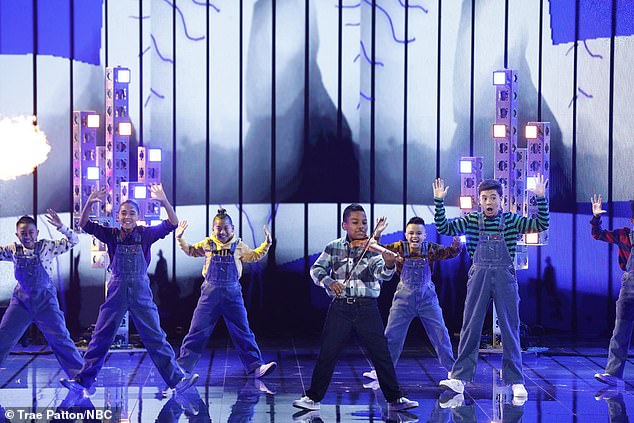 ‘The violin was almost like my hero,’ Tyler remembered. ‘It was way to take me through hard things. With the violin, I felt like I could do anything.’

Tyler, who went into remission four years ago, danced as he played the violin to Lil Nas X’s Old Town Road, joined by a group of kids behind him.

He, too, got a standing ovation, and high praise from Howie, who said, ‘Oh my God, you are amazing and I’m a huge fan of what you can do. You’re so authentic and so wonderful, and I think the superfans are going to love you.’ 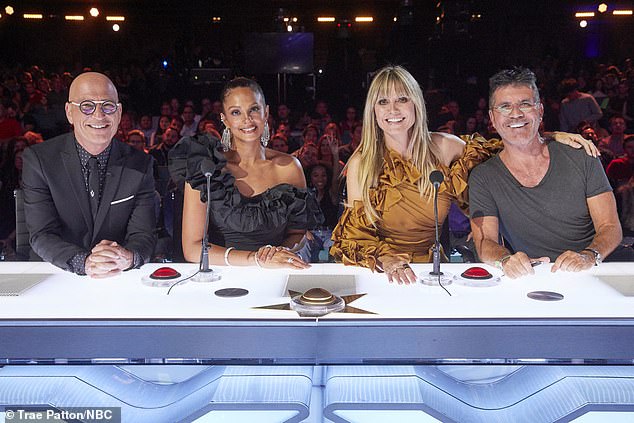 Spin-off show: Alesha and Heidi joined the spin-off after Gabrielle Union and Julianne Hough were let go after the last season of AGT

Duo Destiny, the winner of Poland’s Got Talent in 2019, had the crowd gasping later on with the risks they took, combining acrobatics, dance and contortionism.

The couple behind the group had fallen in love while performing as dancers together, and their skill was undeniable, especially when the female member of the duo plunged from a great height into her partner’s hands, upside-down. 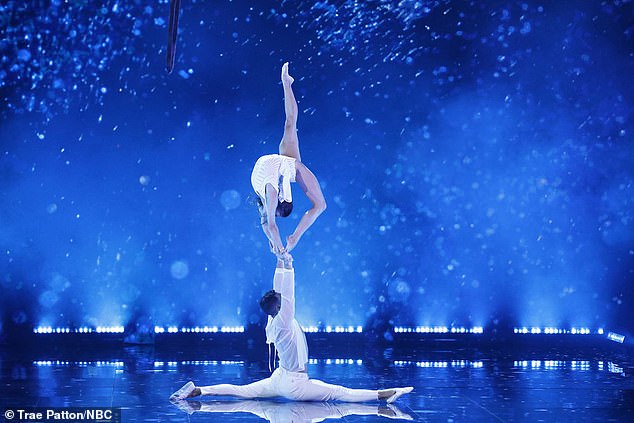 Dynamic duo: Duo Destiny, the winner of Poland’s Got Talent in 2019, had the crowd gasping later on with the risks they took, combining acrobatics, dance and contortionsm

‘That was perfect,’ Heidi swooned. ‘There was not one mistake. And it was sexy, it was romantic. Ahhhhh.’

‘You are astonishing,’ Simon concurred, as Howie called it ‘seamless.’

London magician Ben Hart, 29, who made it to third place on Britain’s Got Talent, was about to embark on his first headlining tour around the UK. 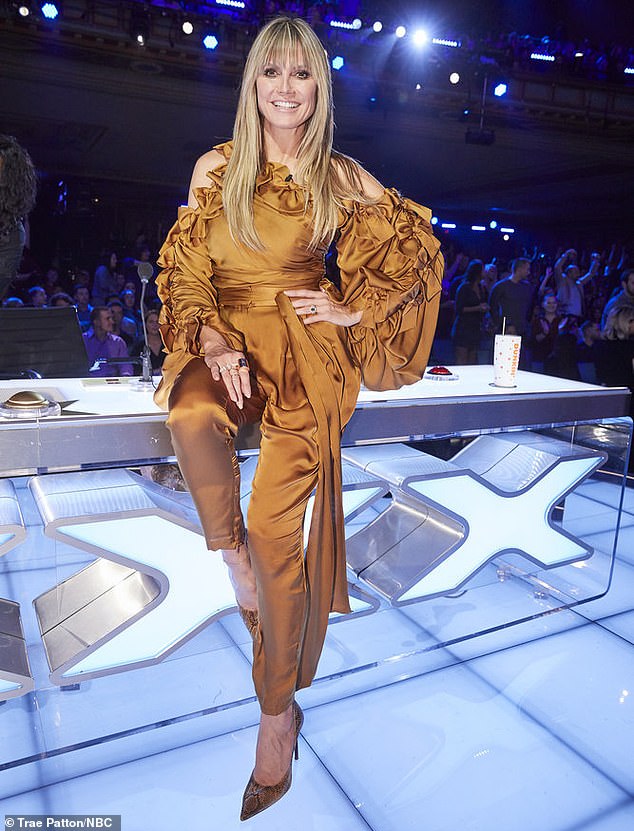 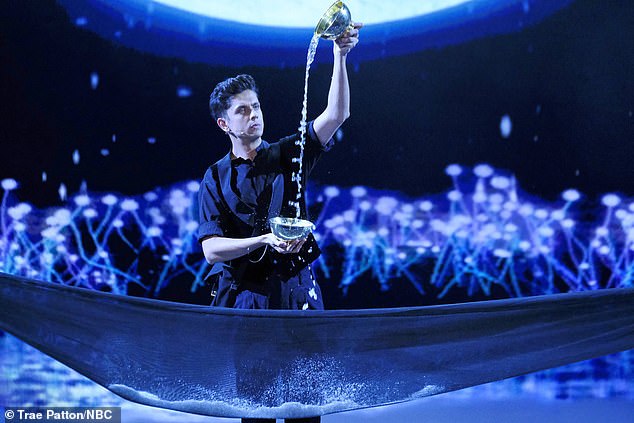 London magician: Ben Hart, 29, who made it to third place on Britain’s Got Talent, was about to embark on his first headlining tour around the UK

But his act, which involved doubling rice in a bowl, and turning it into water, failed to captivate the judges, who seemed more puzzled than upset.

‘Don’t tell me that was it,’ Simon begged as he finished. ‘That was it,’ Howie retorted, telling Ben it hadn’t been worthy of going through to the next round. 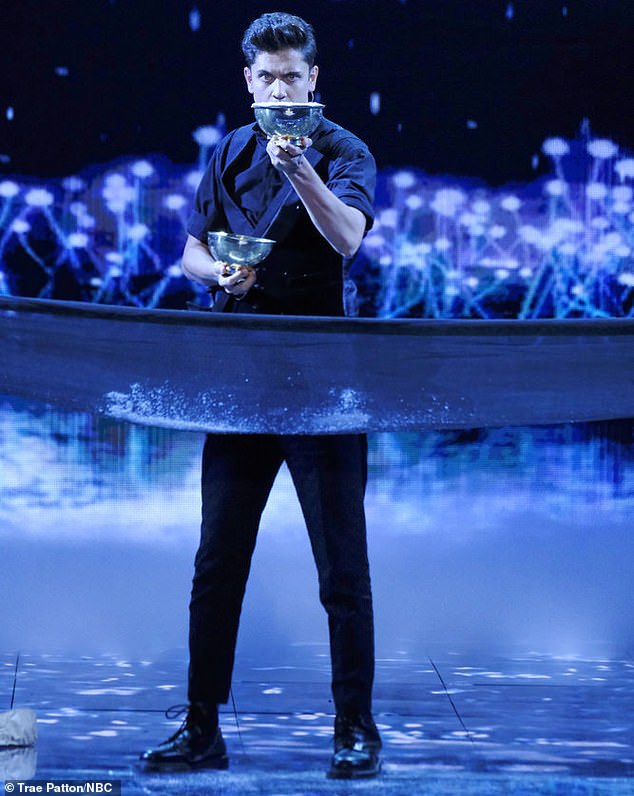 Good effort: The London magician was eliminated after his magic act failed to impress

Moses Concas, a beatboxing harmonica player who won Italia’s Got Talent in 2017, went home after Howie found him underwhelming, and dance trio Quick Style, the 2009 winners of Norway’s Got Talent, just didn’t get the momentum needed.

Illusionist Miki Dark, a semifinalist in Holland’s Got Talent in 2019, got Heidi into his act, throwing a knife at her while she was trussed up, which nailed a hidden photo fragment inside an envelope. When revealed, the piece completed a photo of Simon’s face.

But Miki’s act failed to work its magic, too, and he didn’t make it through. 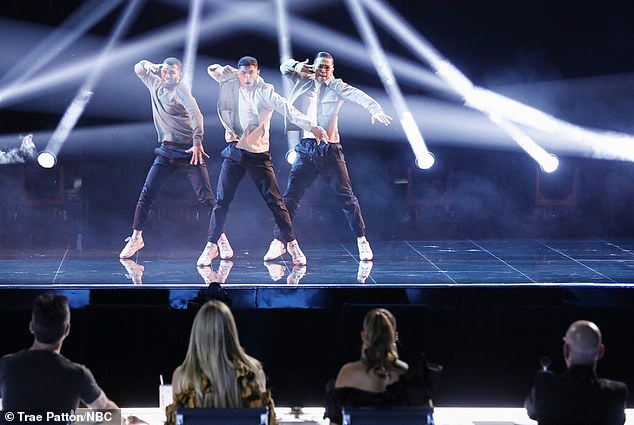 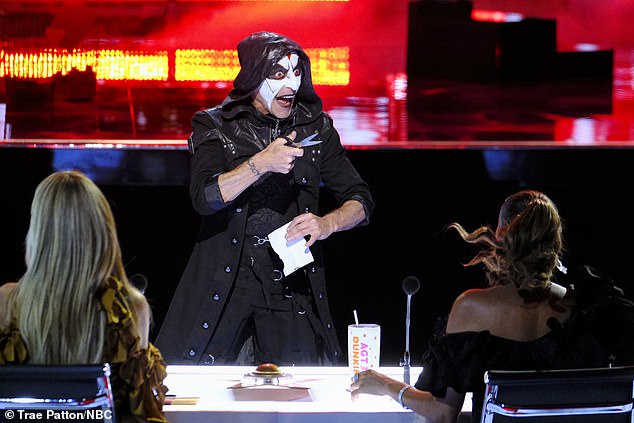 Magic man: Miki Dark, , a semifinalist in Holland’s Got Talent in 2019, also failed to make the cut 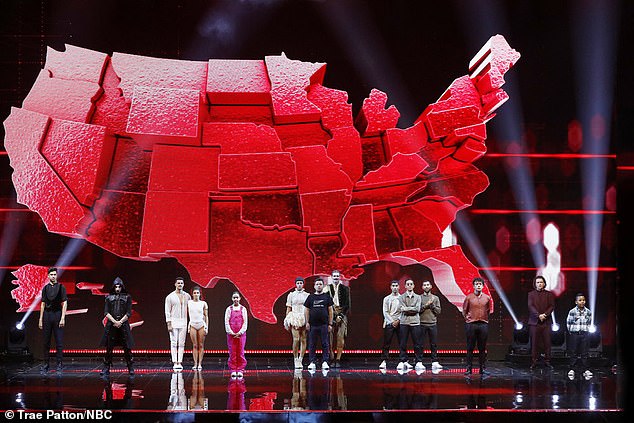