The past week has been one of extraordinary violence in the United States.

It has been one in which an alleged white supremacist sent 14 pipe bombs to prominent democratic supporters including two former Presidents; a man who killed two people at a Kroger grocery store in Kentucky tried to enter a black church minutes before the fatal shooting; and on Saturday, a gunman appears to have killed at least eight people at a Pittsburgh synagogue.

Some commentators have suggested such news had ‘an air of inevitability’- the result of the culmination of what has is a violent time in political culture.

With a nation divided, violence seems to permeates political dialogue and sometimes erupts at political events. 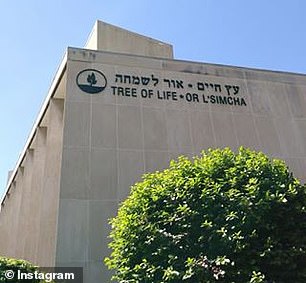 President Trump repeatedly invites his supporters to beat up protesters at his rallies, and then implies that the protesters bring such violence on themselves by disrupting him.

With FBI investigations just starting, it’s impossible to say whether the perpetrator or perpetrators were rightwing nationalists, but their intended victims suggest the possibility of such markings.

On Wednesday two African-Americans were shot dead in the parking lot of a grocery store in the Louisville suburb of Jeffersontown.

The suspect, believed to be Gregory A. Bush, 51, had tried to enter the First Baptist Church in just 15 minutes earlier but could not get inside.

When Bush was unable to enter the church, he went to the store and opened fire, killing two.

It may come as no more of a surprisethat Jewish people were the target of Saturday’s shooting at the Tree of Life Synagogue in the leafy, middle-class neighborhood of Squirrel Hill in Pittsburgh.

The areas is where most of the city’s Jewish residents live making up 40% of the demographics and the shooter will have known that Saturday morning Sabbath services would have commanded a larger presence than during the week.

At the time of the shooting, three different congregations were holding services at the Tree of Life facility.

Situated five miles away from downtown Pittsburgh the community would have felt safe and secure in their enclave with the possibility of a shooting or acts of violence far from anyone’s mind.

Although the community are often on ‘alert’ during Jewish holidays such as Yom Kippur or Rosh Hashanah, many synagogues across the U.S. reduce their levels of security throughout the rest of the year.

Yet violence has now spread to leafy, tree-lined suburbia.

There are also an eclectic mix of Thai and Indian eateries, pizza joints and delis along Forbes Avenue which runs through the neighborhood.

The synagogue was founded more than 150 years ago when two Pittsburgh congregations merged to form the Tree of Life.

The congregation describes itself as a conservative Jewish congregation which remains true to traditional teachings, yet is also ‘progressive and relevant to the way  modern day life.’

‘From our warm, inviting and intellectually stimulating atmosphere to our fun adult, children and family programs, it’s the perfect environment to grow a strong faith rooted in tradition,’ the synagogue promote on their website.