America’s new dawn: White House in darkness (aside from the Residence) as Trump moves out

The White House was in darkness this morning aside from the Residence, where Trump is gathering the last of his things before moving out to make way for Joe Biden, who will be inaugurated as America’s 46th President at noon.

President Trump is expected to fly to Florida at around 8am, skipping Biden’s inauguration ceremony and turning his nose up at the traditional transition of power.

Marine One is on its way to the White House to pick them up for the last time to take them to Joint Base Andrews, where Air Force One is waiting with a red carpet rolled out in front of it.

As Trump flies to Mar-a-Lago, Biden will attend mass with Nancy Pelosi and Mitch McConnell. He will then watch stars including Jennifer Lopez and Lady Gaga serenade him on the Captiol before delivering his address to the nation and being sworn in.

This year, due to the ongoing pandemic and fears of a security threat, the mall – where thousands normally line up to greet the new President and First Lady – will be closed to the public.

A smaller-than-usual crowd of guests including former Presidents and lawmakers will attend the inauguration ceremony in a socially-distanced manner instead. 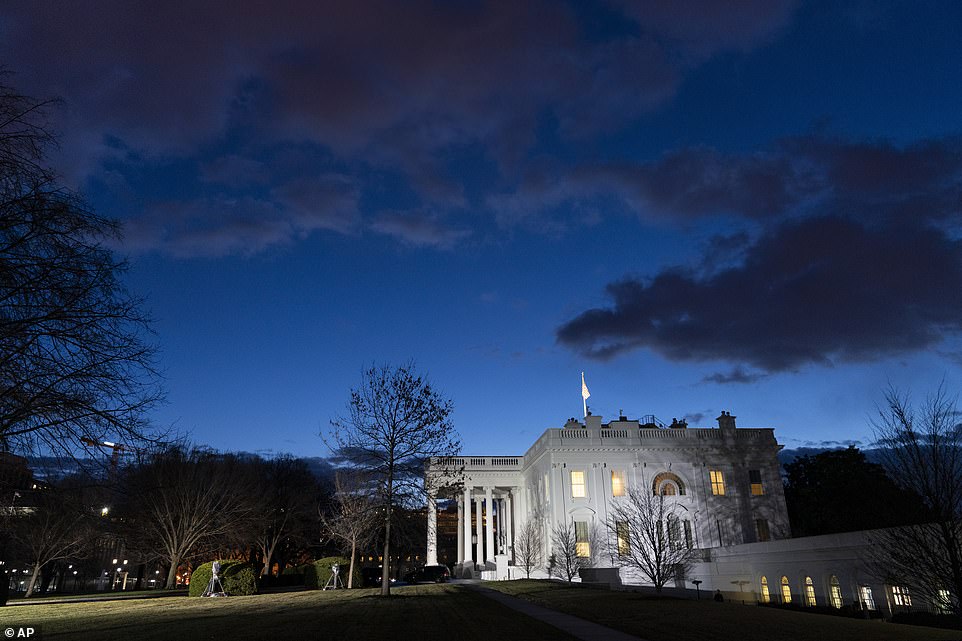 The only lights on were in the Residence and parts of the West Wing, where movers were seen loading up trucks 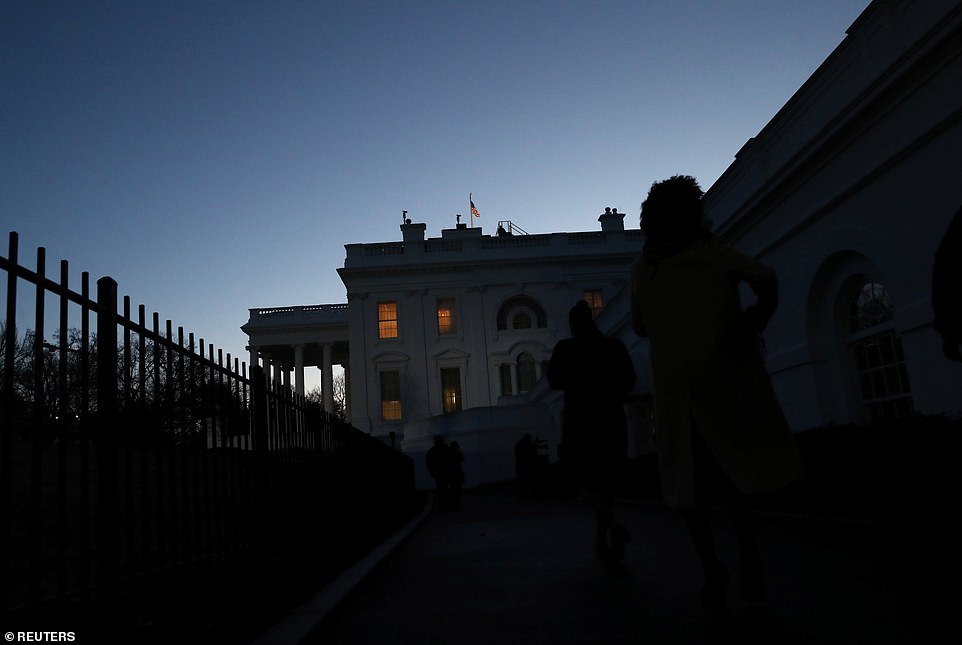 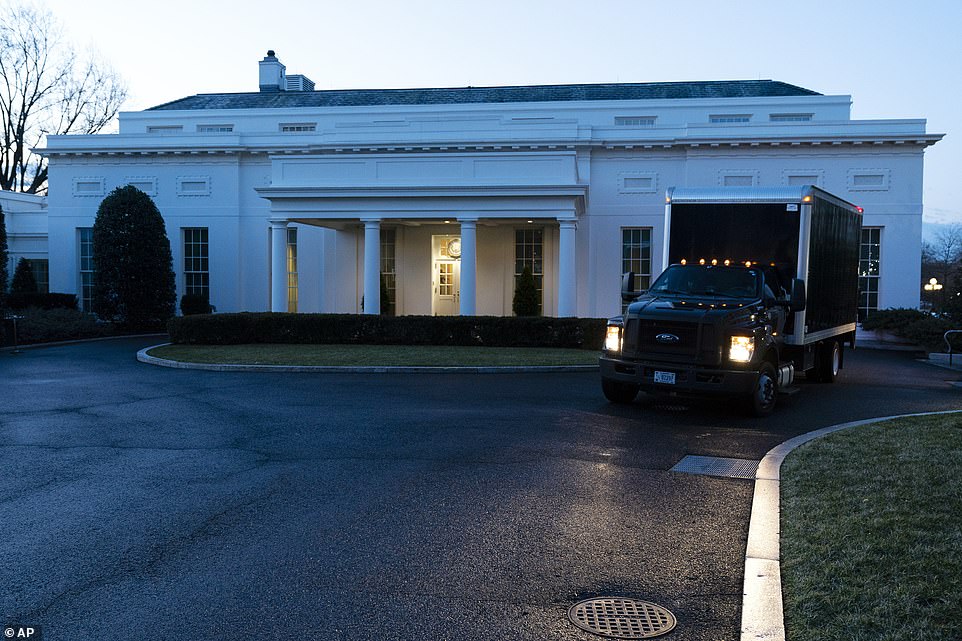 A moving truck drives away from the West Wing of the White House, Wednesday, Jan. 20, 2021, in Washington, on Wednesday January 20 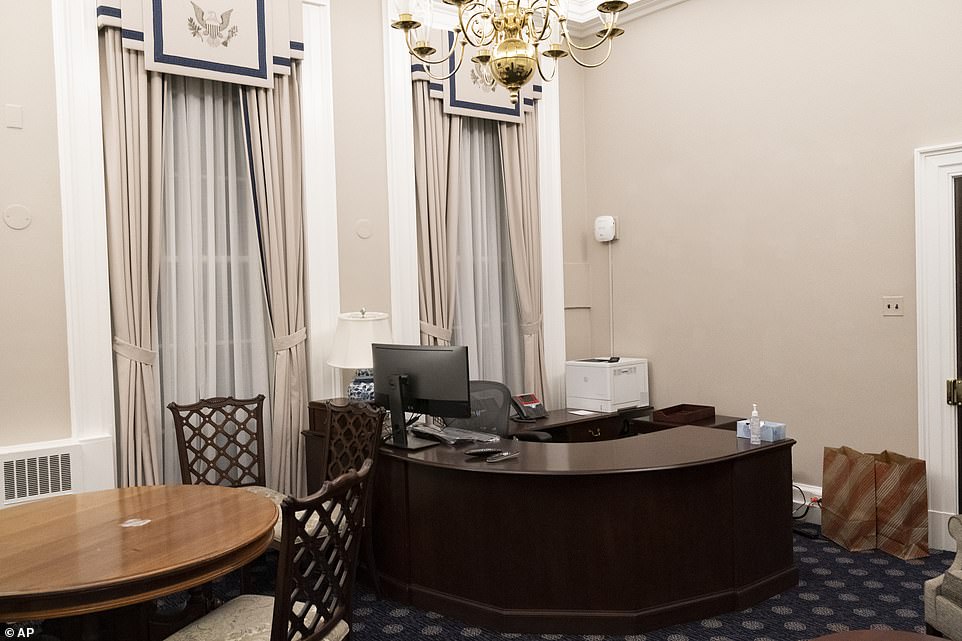 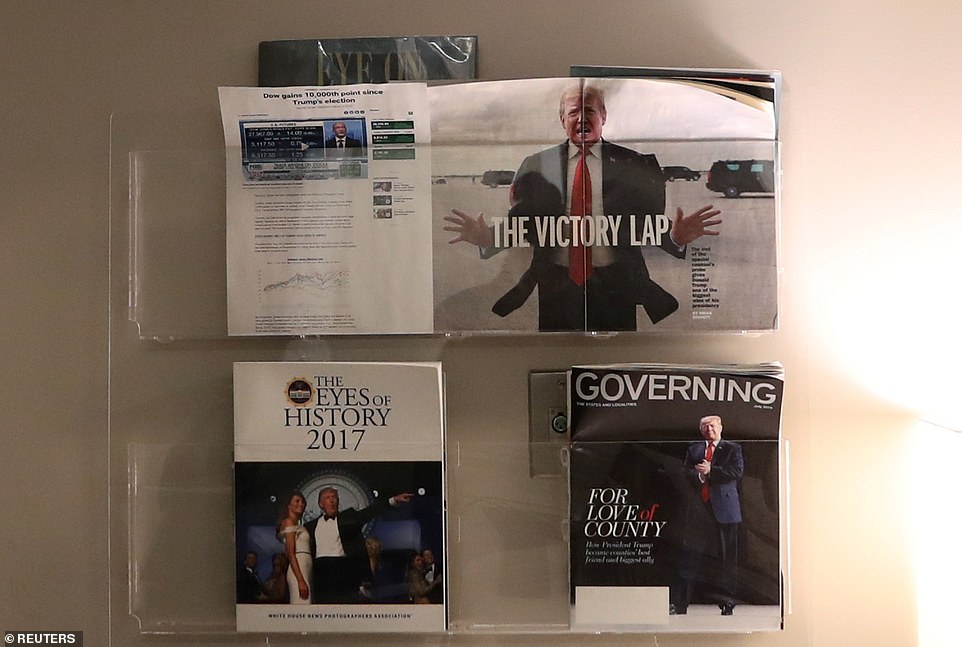 In the Lower Press Office, staffers left behind magazines with Trump on the cover 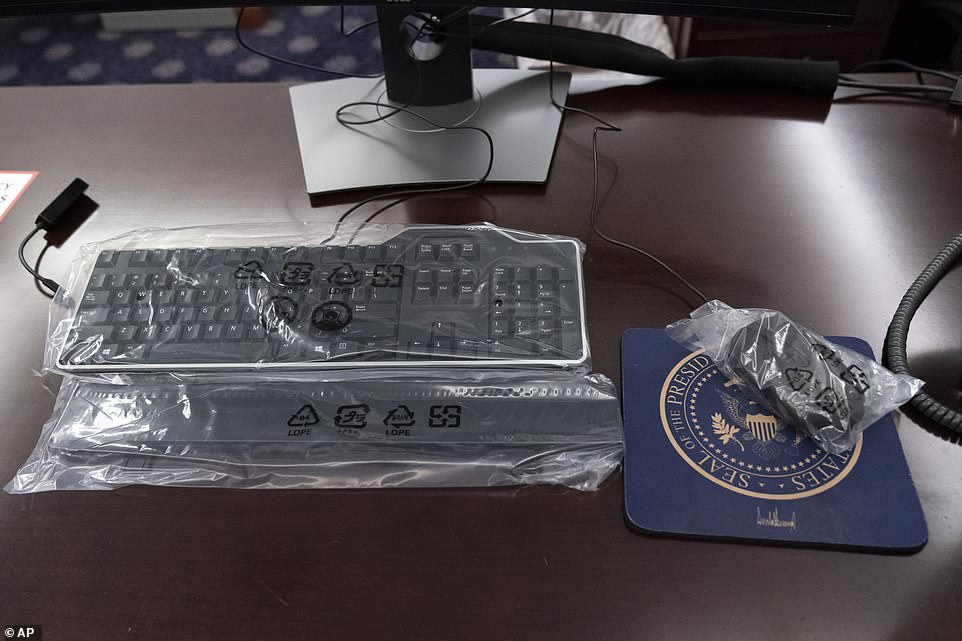 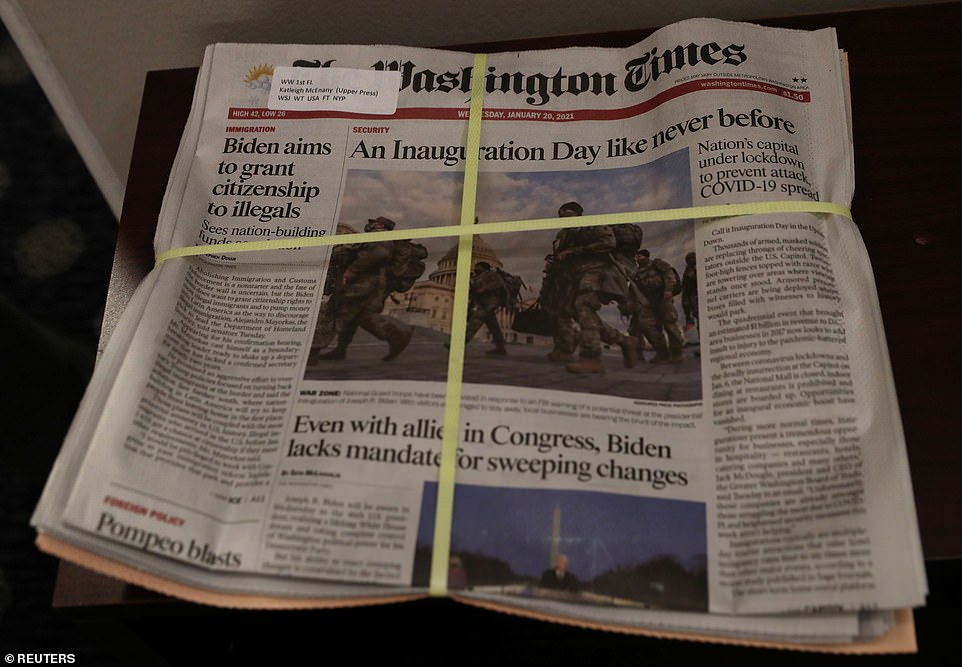 A newspaper addressed to White House Press Secretary Kayleigh McEnany lies on a table in an empty Upper Press Office area prior to U.S. President Donald Trump’s departure ahead of the inauguration ceremony of President-elect Joe Biden 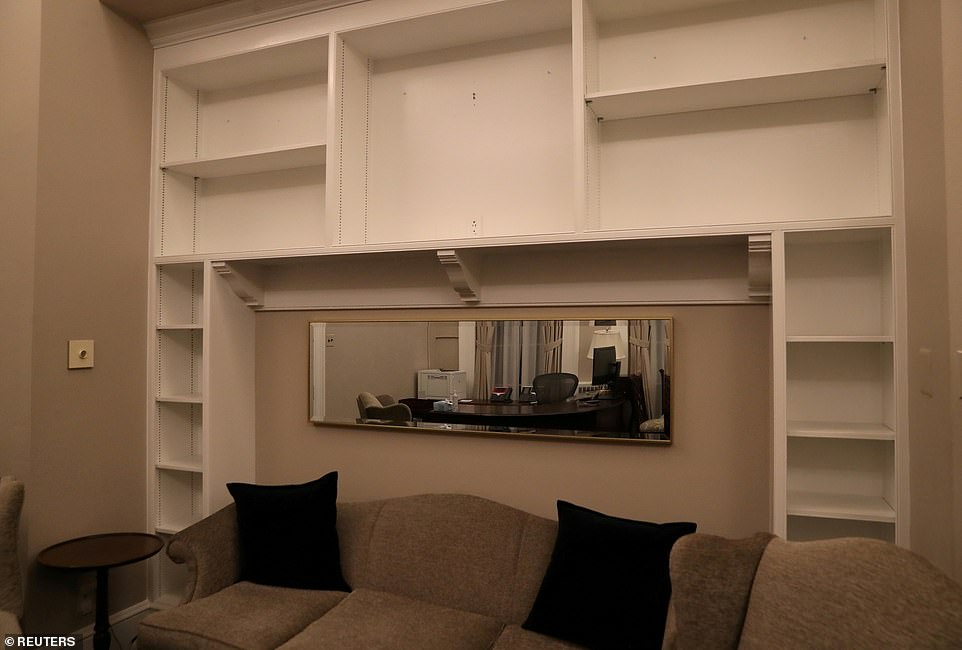 The office of the White House press secretary sits empty prior to U.S. President Donald Trump’s departure ahead of the inauguration ceremony of President-elect Joe Biden, in Washington, U.S. January 20, 2021

The inaugural theme for this year’s ceremony, ‘America United’, aims to restore the ‘soul of America’, bring the nation together and create a ‘path to a brighter future’, according to the incoming administration.

The Presidential Inaugural Committee (PIC) has announced a series of events to be broadcast throughout Inauguration Day that Americans can watch live from home as people have been ordered to refrain from attending in person.

In lieu of the usual crowds, approximately 191,500 flags will cover the National Mall in honor of those unable to travel to Washington due to the pandemic.

Three hours before Biden will be sworn in as the 46th U.S. President, he will be attending mass at St. Matthew the Apostle Cathedral with members of the House and Senate at 8:45am.

Guests will then begin arriving on the steps of the Capitol at around 11am.

Because of the ongoing pandemic, organizers have slashed attendance from 200,000 down to just 1,000 people.

Most members of Congress are expected to be in attendance (and have all been permitted plus-ones), as are three of the four living former presidents: Barack Obama, George W. Bush and Bill Clinton. 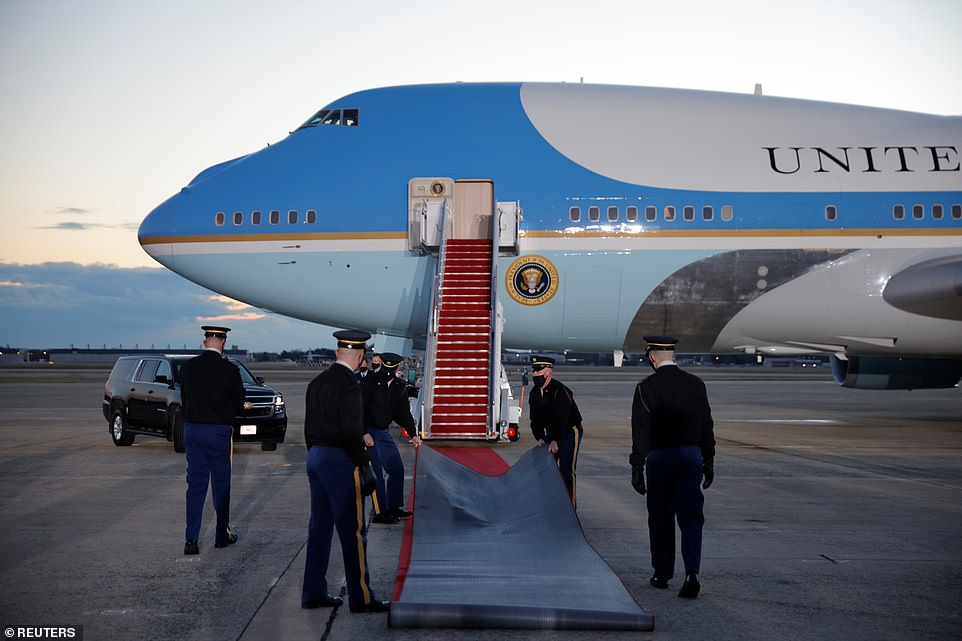 Roll out the red carpet one more time: Air Force members get ready for the last time the president will walk up the steps of Air Force One 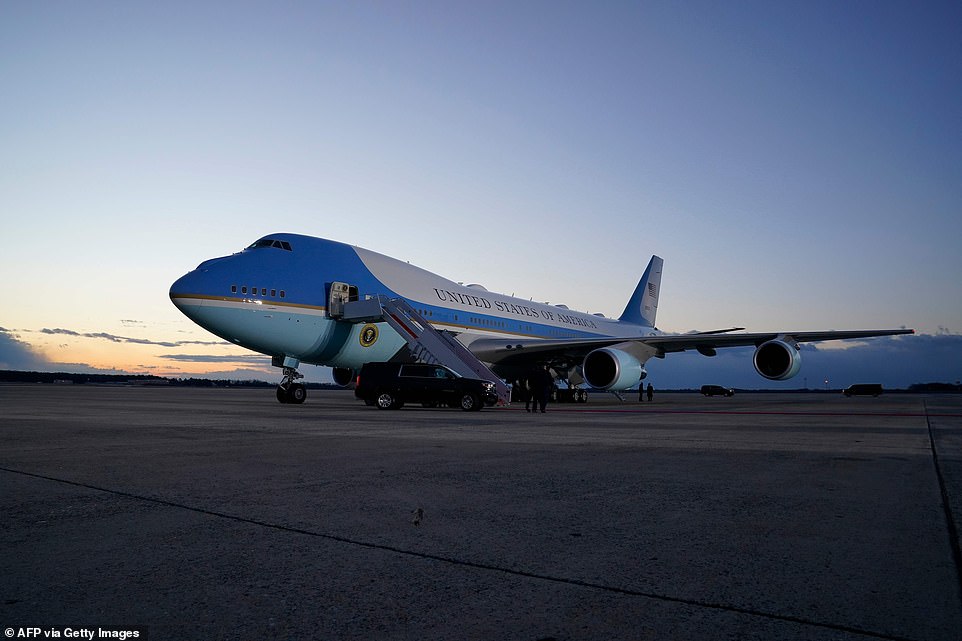 Last flight: Donald Trump can never again fly on Air Force One – the call sign is only used when the president is on board 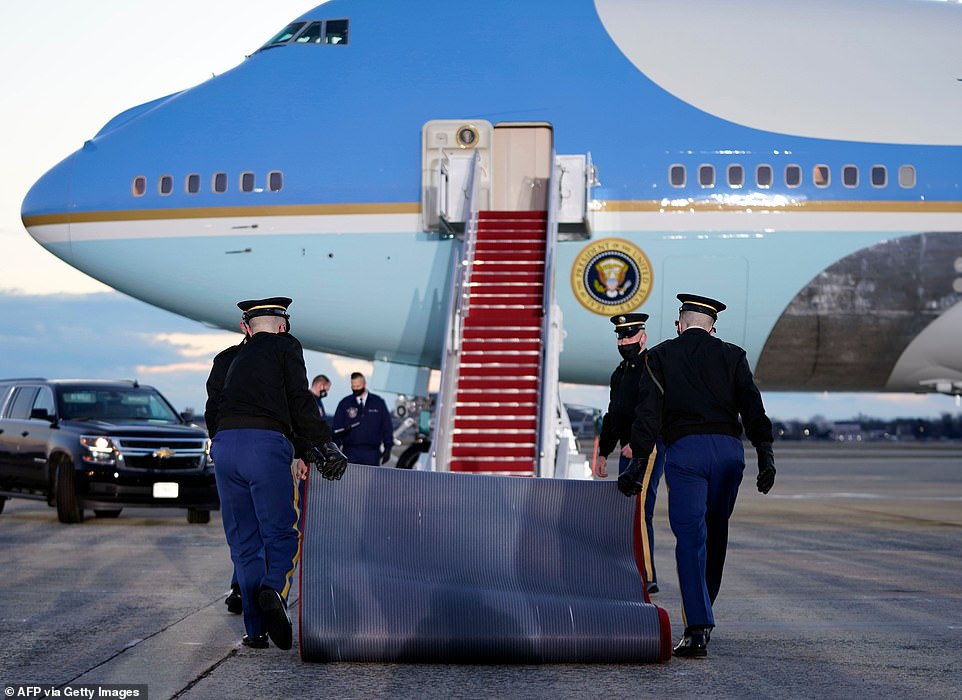 In place: The red carpet is laid down at the steps to Air Force One at Joint Base Andrews for the flight to Mar-a-Lago 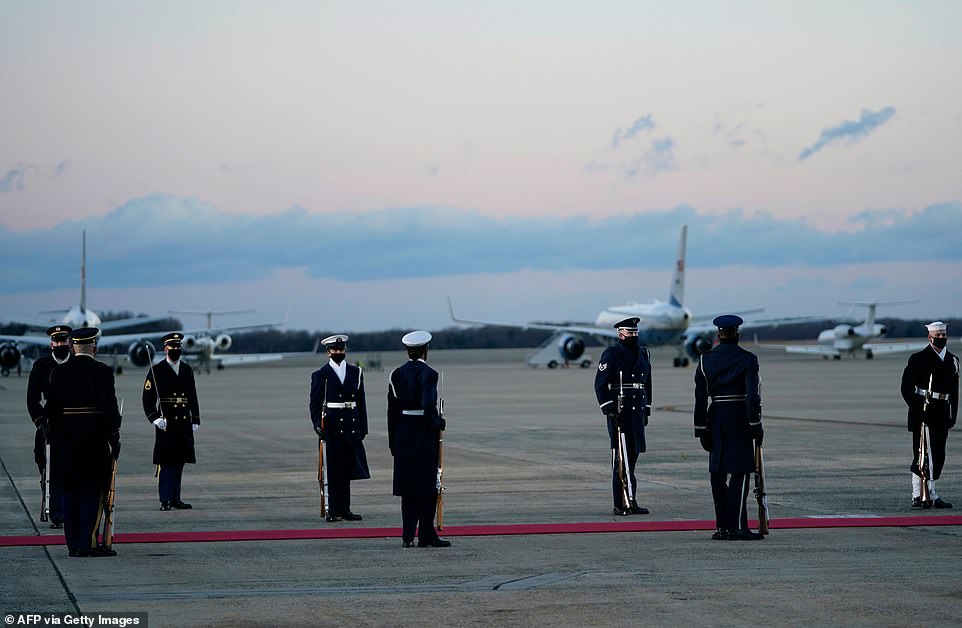 Honor guard ready: A military escort including soldiers and sailors waits beside the red carpet at Joint Base Andrews 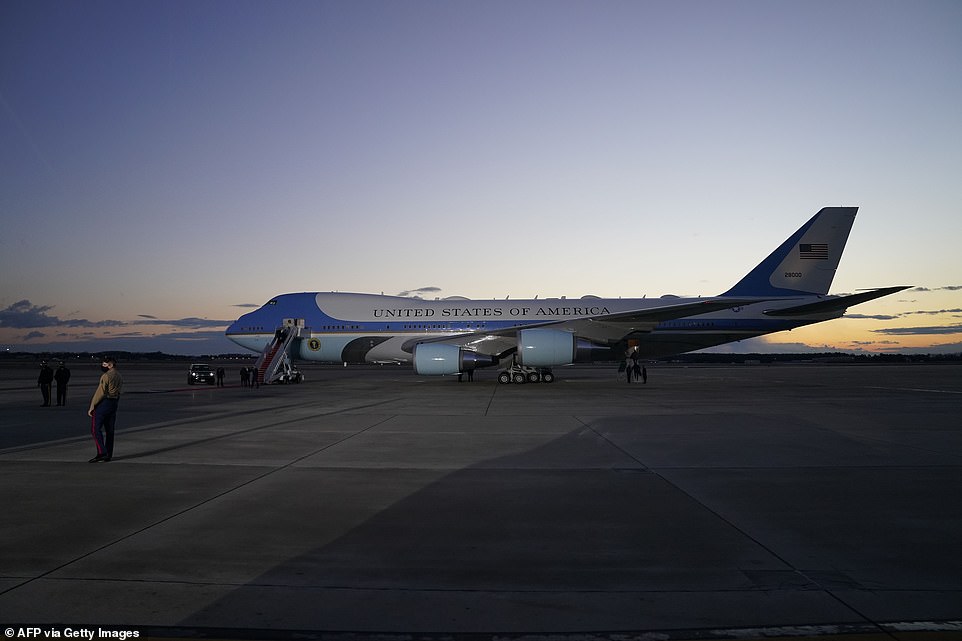 All this will be Joe’s: The next time Air Force One flies it will have the new president on board. The Air Force 747 will fly back from Mar-a-Lago after Biden is sworn in and be ready for him at Joint Base Andrews 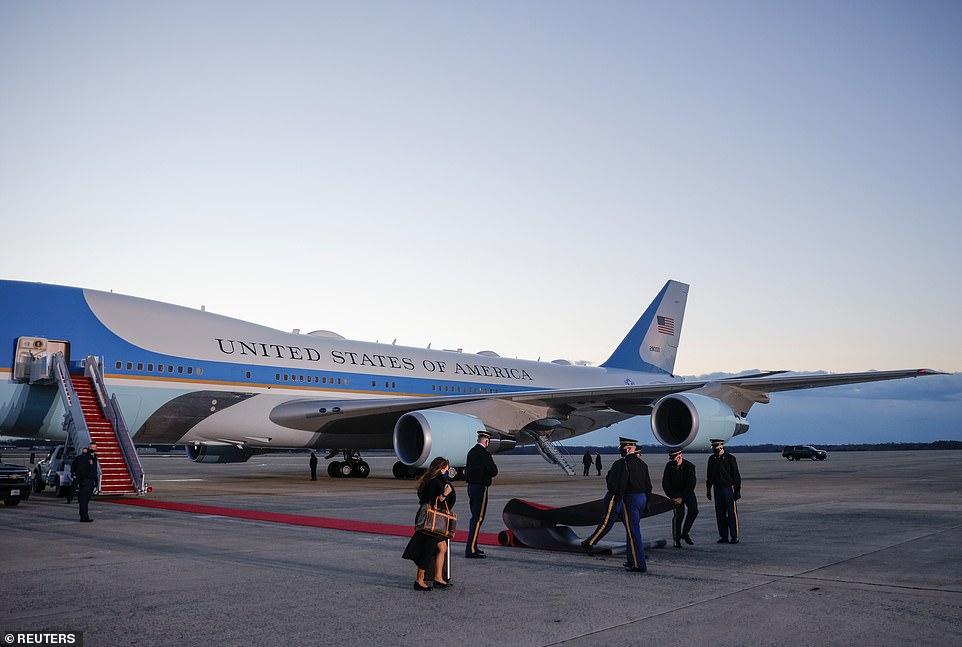 8:45am: Attend mass at St. Matthew the Apostle Cathedral with members of Congress

10:30am: Biden, Harris and roughly 1,000 guests arrive at the East Front of the US Capitol

11:00am:  Ceremony will begin with an invocation by the Rev. Leo J. O’Donovan, a Jesuit priest who is a close friend of the Biden family.

Andrea Hall, the first African American female firefighter to become captain of the Fire Rescue Department in South Fulton, Georgia, will recite the Pledge of Allegiance.

Amanda Gorman, who became the country’s first Youth Poet Laureate in 2017, will read a poem she has written for the occasion called ‘The Hill We Climb.’

12:00pm: Joe Biden is sworn in as president by Chief Justice John Roberts.

Kamala Harris is sworn in as Vice President by Justice Sonia Sotomayor, the first Latina member of the Supreme Court.

1:40pm: Biden and Harris review the readiness of military troops in a pass in review.

2:25pm: Biden, Harris and their spouses go to Arlington Cemetery to lay a wreath on the Tomb of the Unknown Soldier.

5:45pm: Biden swears in Day One Presidential Appointees in a virtual ceremony.

President Trump will not be attending.

He confirmed his absence in a tweet earlier this month shortly before he was permanently suspended from the social media platform.

Instead, Trump will leave DC on Air Force One at around 8am, with his destination set for his Mar-A-Lago resort in Florida.

He is set to become the first president in more than a century to not attend his successor’s inauguration. Only three presidents have previously abstained, with the last, Andrew Johnson, coming in 1869.

Vice President Mike Pence, meanwhile, has confirmed he will be attending, along with his wife, Karen.

President Trump will not be attending. He confirmed his absence in a tweet earlier this month shortly before he was permanently suspended from the social media platform.

Instead, Trump will leave DC on Air Force One at around 8am, with his destination set for his Mar-A-Lago resort in Florida.

He is set to become the first president in more than a century to not attend his successor’s inauguration. Only three presidents have previously abstained, with the last, Andrew Johnson, coming in 1869.

Vice President Mike Pence, meanwhile, has confirmed he will be attending, along with his wife, Karen.

The inauguration ceremony will commence with remarks from Father Leo J. O’Donovan, a longtime friend of the Biden family and former president of Georgetown University.

Andrea Hall, the first African American female firefighter to become captain of the Fire Rescue Department in South Fulton, Georgia, will then recite the Pledge of Allegiance.

A number of live performances are also scheduled to take place throughout the ceremony.

The first on the bill is Lady Gaga, who will sing the national anthem. The singer previously teamed with Biden on domestic violence issues during his two terms as Vice President and also campaigned for him in the 2020 election.

Amanda Gorman, who became the U.S.’s first Youth Poet Laureate in 2017, will then recite a poem she has written for the occasion, titled: ‘The Hill We Climb.’

Much like the incoming president, Gorman also once had a speech impediment that she has worked hard to overcome.

She has also recently announced plans to run for president in 2036 – the first year in which she will be eligible.

Jennifer Lopez will then follow Gorman’s reading with a song, as will singer-songwriter Garth Brooks.

The performances with then conclude with a benediction from longtime Biden family friend, Rev. Silvester Beaman, of Bethel African Methodist Episcopal Church in Wilmington, Delaware.

Chief Justice John Roberts will administer the oath of office to Biden shortly after the clock strikes noon.

Biden will take the oath with his hand on top of his 127-year-old, five-inch-thick family Bible, which will be held by his wife, Dr. Jill Biden.

Kamala Harris, the first woman, the first black and the first South Asian American vice president, will then take the oath immediately after.

Harris is due to be sworn in by Justice Sonia Sotomayor, the first Latina to serve on the bench of the Supreme Court.

Like Harris, Sotomayor is a former prosecutor. She previously administered the oath to Biden when he was sworn in for his second term as Vice President in 2013.

Harris will be sworn in on two Bibles — one that belonged to a close family friend named Regina Shelton and another that belonged to Thurgood Marshall, the country’s first African American Supreme Court Justice.