A spokesperson announced on Wednesday that the man known as ‘America’s Pastor’ had lost his life at the age of 99 after a lifetime devoted to his faith.

Graham, who passed away of natural causes at his North Carolina home, served as a spiritual leader to hundreds of millions of Americans as well as multiple presidents.

He is survived by his five children with wife Ruth Bell, who passed away in 2007, and 19 grandchildren.

‘The GREAT Billy Graham is dead. There was nobody like him! He will be missed by Christians and all religions. A very special man,’ wrote President Trump.

First Lady Melania Trump wrote: ‘Saddened by the loss of Evangelist Billy Graham. He led an impactful life, touching so many people with his spiritual teachings. He will be deeply missed.’

And Trump’s predecessor Barack Obama tweeted: ‘Billy Graham was a humble servant who prayed for so many – and who, with wisdom and grace, gave hope and guidance to generations of Americans.’

Gone: Billy Graham (above in 2005 at his final crusade in NYC) passed away at his home in North Carolina on Wednesday at the age of 99 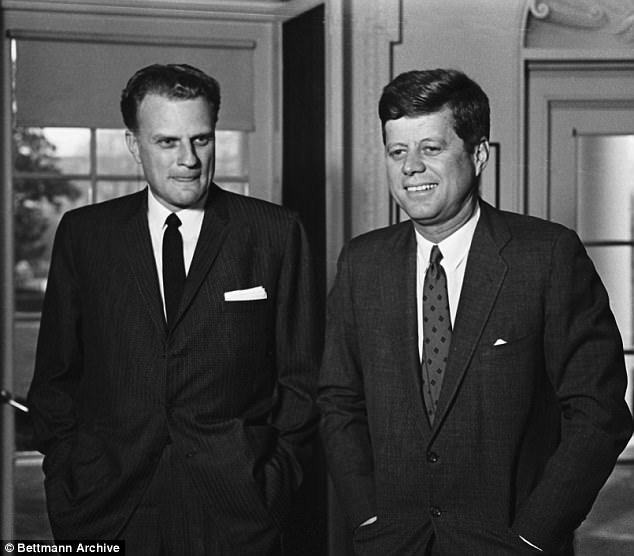 Man of faith: He was a spiritual advisor to multiple presidents, including John F Kennedy(pair above in 1962) 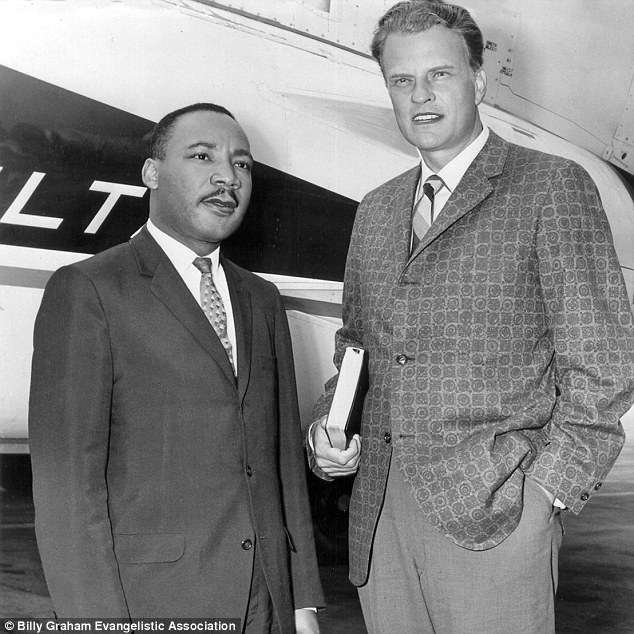 Ally: He was a close friend to Dr. Martin Luther King, who credited him with some of the success of the Civil Rights Movement (pair above in 1957)

Graham was a confidant to President Dwight Eisenhower and President George W. Bush, as well as many of the men that served in between those two leaders.

President Reagan gave Graham the Presidential Medal of Freedom in 1983, and when the Billy Graham Museum and Library was dedicated back in 2007, George H.W. Bush, Jimmy Carter and Bill Clinton were among those in attendance.

‘When he prays with you in the Oval Office or upstairs in the White House, you feel he’s praying for you, not the president, said Clinton in his speech that day.

In the end, he preached to over 200 million people over the course of his lifetime, and at one point prayed with every single president since Harry Truman.

He was close with Dr. Martin Luther King as well, who credited Graham with the playing a huge role in the success of the civil rights movement.

Graham refused to segregate his audiences starting in 1953, and would later decline invitations to hold one of his famed crusades in South Africa during apartheid.

‘Had it not been for the ministry of my good friend Dr. Billy Graham, my work in the Civil Rights Movement would not have been as successful as it has been,’ said Dr. King of Graham.

He was also a huge inspiration to Vice President Mike Pence, who shared his thoughts about Graham’s passing on Twitter. 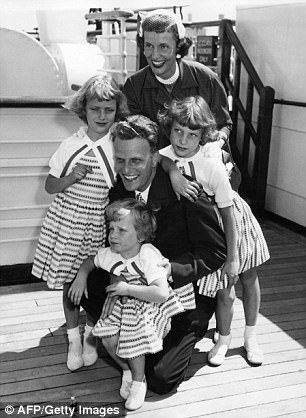 Graham with wife Ruth and their daughters Virginia, Anne and Ruth in 1954

‘Karen and I were saddened to learn of the passing of one of the greatest Americans of the century, Reverend Billy Graham. We send our deepest condolences to the Graham family,’ wrote Pence.

‘Billy Graham’s ministry for the gospel of Jesus Christ and his matchless voice changed the lives of millions. We mourn his passing but I know with absolute certainty that today he heard those words, “well done good and faithful servant.” Thank you Billy Graham. God bless you.’

Former New York City mayor Michael Bloomberg tweeted: ‘Rev. Billy Graham held his final crusade in Queens, the most diverse county in the U.S. – fitting for someone who inspired so many people all around the world.’

Kathie Lee Gifford also paid tribute to Graham on Today in an interview with Megyn Kelly, just minutes after learning the news.

‘I think the value of a life is if you can look back and say you impacted one person’s life for eternity – how awesome is that? Well, Billy can look back on his life and be absolutely assured that he has impacted millions of lives for eternity,’ Gifford said in a tribute to Graham.

‘The thing that I adored most about him is that he remained the most humble and giant of a man you would ever, ever, ever want to meet. He had this incredible, loving presence of a person for the masses, but then when you were one-on-one with him, you were the only person in the room. Rarely do people have both of those gift.’

She also spoke about her reaction upon learning the news, saying: ‘I immediately put up my hands and said, thank you, lord, thank you. He has been lingering and languishing.’

She went on to speak about their final meeting.

‘The last time I saw him was four years ago at his 95th birthday party. Frank was alive then, too. We went down there. And I was sitting with his granddaughter at a table and hadn’t seen him. But I knew that would be the last time I’d see him. And I said, “Can I go tell your grandfather thank you?,”‘ said Gifford.

‘My whole family came to faith and Jesus through the Billy Graham Organization.’ 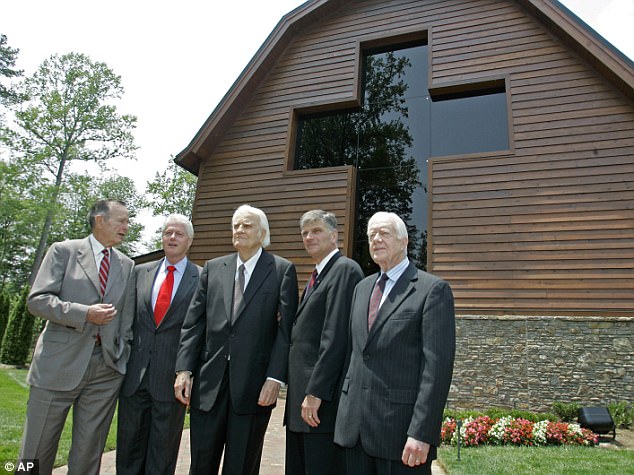 All the presidents: George H.W.Bush, Bill Clinton and Jimmy Carter with Graham and his son Franklin in 2007 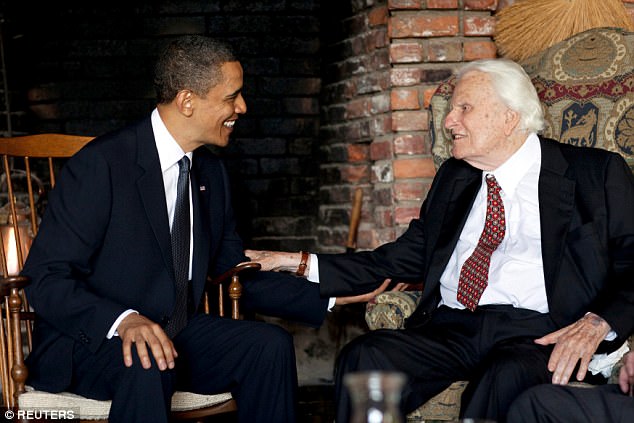 Brack and Billy: Graham and Obama at his North Carolina home back in 2010 (above) 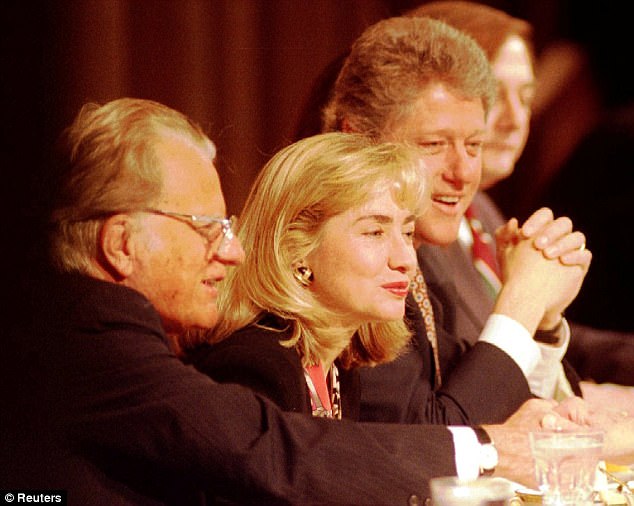 Billy and Billary: Graham and the Clintons at a 1993 prayer breakfast (above)

Graham may have had many famous fan, but no one was more important in his life than wife Ruth, of whom he famously said: ‘When it comes to spiritual things, my wife has had the greatest influence on my ministry.’

His children followed in his path two, with all five working in faith-based jobs and his son Franklin the current president and CEO of the Billy Graham Evangelistic Association.

Graham was born on a dairy farm in North Carolina, and began preaching in college.

He first attended Bob Jones University but then transferred to Tampa Bible College, where he began delivering sermons at United Gospel Tabernacle.

He still wasn’t convinced he should be a preacher until a soul-searching, late-night ramble on a golf course.

‘I finally gave in while pacing at midnight on the 18th hole,’ said Graham.

Graham, who became a Southern Baptist, went on to study at Wheaton College, a prominent Christian liberal arts school in Illinois, where he met fellow student Ruth Bell, who had been raised in China where her father had been a Presbyterian medical missionary.

The two married in 1943, and he planned to become an Army chaplain. But he fell seriously ill, and by the time he recovered and could start the chaplain training program, World War II was nearly over.

Instead, he took a job organizing meetings in the U.S. and Europe with Youth for Christ, a group he helped found.

He stood out then for his loud ties and suits, and a rapid delivery and swinging arms that won him the nickname “the Preaching Windmill.”

A 1949 Los Angeles revival turned Graham into evangelism’s rising star. Held in a tent dubbed the ‘Canvas Cathedral,’ Graham had been drawing adequate, but not spectacular crowds until one night when reporters and photographers descended.

When Graham asked them why, a reporter said that legendary publisher William Randolph Hearst had ordered his papers to hype Graham. Graham said he never found out why.

The publicity gave him a national profile. Over the next decade, his massive crusades in England and New York catapulted him to international celebrity. 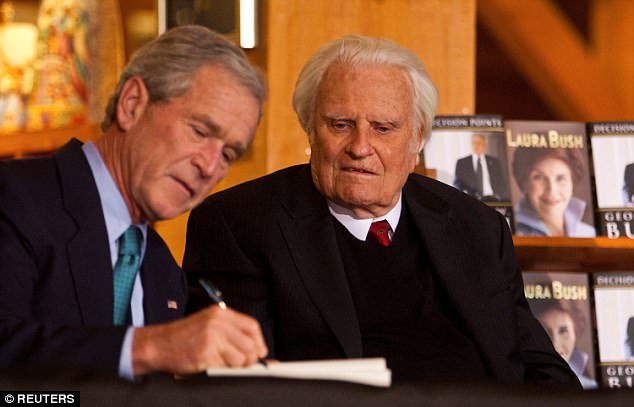 Dubya and Graham: Graham was born on a dairy farm in North Carolina, and began preaching in college. (President Bush and Graham above in 2010) 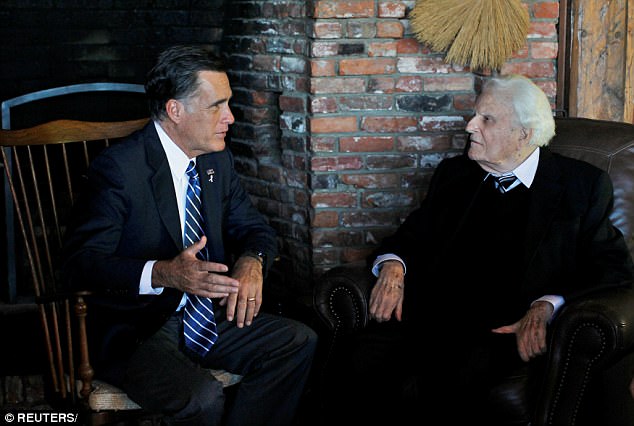 Mitt and Graham: America’s most famous Mormon Mitt Romney (above in 2012 with Graham) wrote: ‘Billy Graham lifted eyes toward heaven and instilled heaven’s values in hearts. The world mourns this man of character, this man of God’

His 12-week London campaign in 1954 defied expectations, drawing more than 2 million people and the respect of the British, many of whom had derided him before his arrival as little more than a slick salesman.

Three years later, he held a crusade in New York’s Madison Square Garden that was so popular it was extended from six to 16 weeks, capped off with a rally in Times Square that packed Broadway with more than 100,000 people.

The strain of so much preaching caused the already trim Graham to lose 30 pounds by the time the event ended. It remains his longest revival meeting ever.

As his public influence grew, the preacher’s stands on the social issues of his day were watched closely by supporters and critics alike.

One of the most pressing was the civil rights movement. Graham was no social activist and never joined marches, which led prominent Christians such as theologian Reinhold Niebuhr to publicly condemn Graham as too moderate.

In a 2005 interview with The Associated Press, before his final crusade which was held in New York, Graham said he regretted that he didn’t battle for civil rights more forcefully.

‘I think I made a mistake when I didn’t go to Selma,’ said Graham.

Graham more robustly took on the cause of anti-Communism, making preaching against the atheist regime part of his sermons for years.

‘Billy Graham was America’s pastor. His faith in Christ and his totally honest evangelical spirit inspired people across the country and around the world,’ said George H.W. Bush.

‘We will miss our good friend forever.’

America’s most famous Mormon Mitt Romney wrote: ‘Billy Graham lifted eyes toward heaven and instilled heaven’s values in hearts. The world mourns this man of character, this man of God.’