America’s wealthiest not listed in Pandora Papers; Snowden mocks the leak over lack of security

America’s wealthiest billionaires, including Jeff Bezos, Elon Musk, Bill Gates and Warren Buffett, do not appear in the Panama Papers.

The dump of more than 11.9 million files has turned up the heat on elites from King Abdullah of Jordan to the alleged mistress of Russian President Vladimir Putin.

Donald Trump is mentioned due to his involvement in a Panama hotel project, but the Pandora documents don’t appear to reveal significant new information about his accounts.

Financial experts say that the absence of many of America’s wealthiest elites comes down to a lack of incentive due to the generous rates they pay domestically.

Other experts speculated that it may also be that they use different havens, such as the Cayman Islands, which weren’t reflected in the papers.

But if American people are absent from the list, the United States themselves are not.

South Dakota in particular has become a new hub for opaque financial dealings, rivalling the likes of the British Virgin Islands and Switzerland.

Trusts in the state have quadrupled in size in the space of ten years to $360 billion thanks to laws which protect assets from any civil claims such as divorce.

‘The humorous side of this very serious story is that even after two apocalyptic offshore finance/law firm leaks, those industries are still compiling vast databases of ruin, and still secure them with a Post-It Note marked “do not leak,”‘ he tweeted. 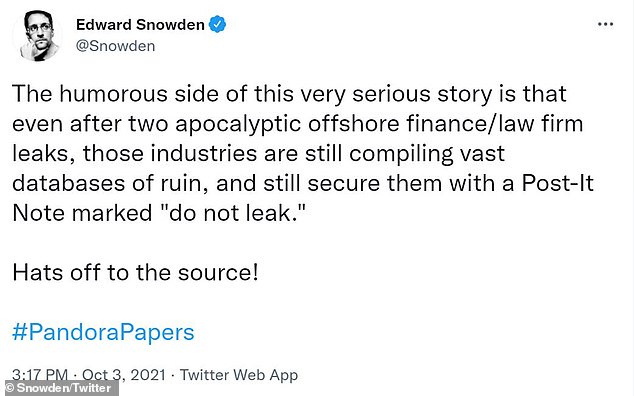 ‘Hats off to the source!’ he added, after pointing out that offshore companies are still compiling secret databases with insufficient security despite recent major leaks.

Snowden leaked classified documents in 2013 to show the scale of government snooping on U.S. citizens and has lived in Russia since.

His comments came hours after the International Consortium of Investigative Journalists published the Pandora Papers, which were named in reference to the 2016 Panama Papers that exposed how the rich were hiding funds in offshore accounts.

The Pandora Papers detail more than 29,000 offshore accounts — double the number identified in the Panama Papers — linked to officials in 91 countries and territories. 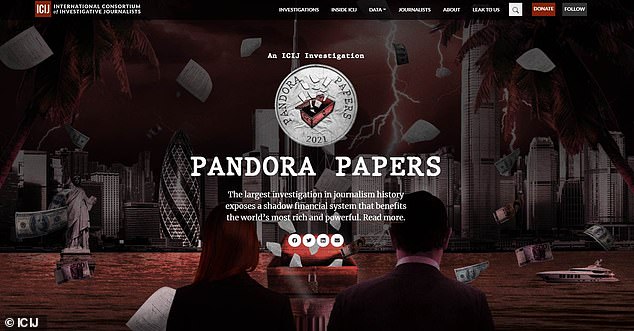 The Pandora Papers detail more than 29,000 offshore accounts inked to officials in 91 countries and territories. Many of the accounts were designed to evade taxes and conceal assets for other suspicious reasons 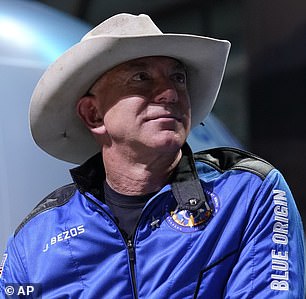 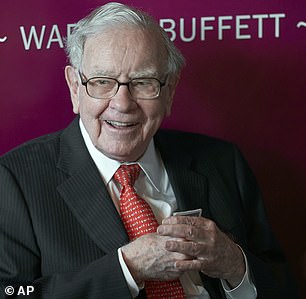 The report showed how world leaders, powerful politicians, billionaires, celebrities, religious leaders and drug dealers have been hiding their investments in mansions, exclusive beachfront property, yachts and other assets for the past quarter-century.

Many of the accounts were designed to evade taxes and conceal assets for other suspicious reasons, according to the report.

The report listed 130 alleged billionaires as account owners but did not include any of America’s wealthiest individuals.

Financial analysts speculate America’s uber-rich — such as Bezos, Buffet, Musk and Gates — have less incentive to use offshore havens due to the low tax rates they pay.

According to a Forbes report published in June, the 25 richest Americans paid a ‘true tax rate’ of 3.4 percent on wealth growth of $401billion between 2014 and 2018.

Bezos reportedly paid a true tax rate of 0.98 percent with Buffet and Musk paying rates of 0.10 percent and 3.27 percent, respectively.

Gates’ true tax rate was not readily available, however, in 2018 he admitted to needing to pay more in taxes.

‘I need to pay higher taxes … I’ve paid more taxes, over $10billion, than anyone else, but the government should require people in my position to pay significantly higher taxes,’ Gates told CNN at the time. 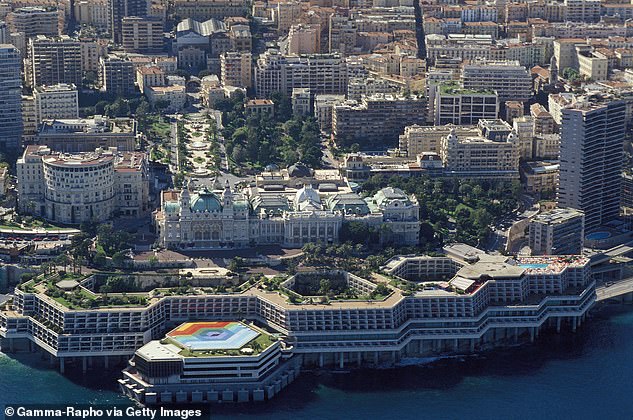 The report showed how world leaders, powerful politicians, billionaires, celebrities, religious leaders and drug dealers have been hiding their investments in mansions, exclusive beachfront property, yachts and other assets for the past quarter-century (Pictured: Monte Carlo Star apartment complex) 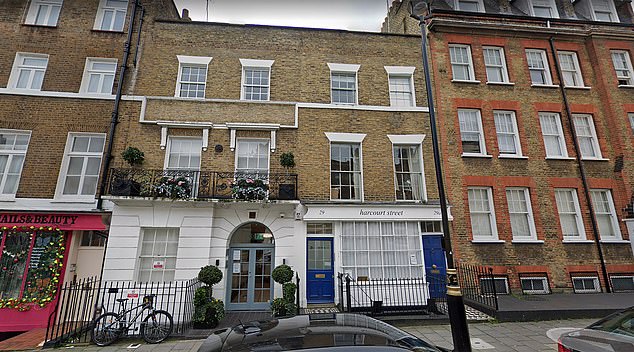 The Pandora Papers only encompassed records for 14 financial services entities that were operating in Switzerland, Singapore, Cyprus, Belize and the British Virgin Islands. It is possible that additional firms could be holding Americans’ funds (Pictured: Tony and Cherie Blair’s London office which was purchased via offshore company, according to the report)

Additionally, experts analyzing the Pandora Papers argue that America’s wealth leaders may have utilized other companies or offshore accounts in different jurisdictions to conceal their money.

The Pandora Papers only encompassed records for 14 financial services entities that were operating in Switzerland, Singapore, Cyprus, Belize and the British Virgin Islands.

It is possible that additional firms could be holding Americans’ funds.

Meanwhile, experts argue that the Pandora Papers leak should spark concern as financial shielding can impact citizens for several generations by worsening wealth disparities and crimes such as drug trafficking, ransomware attacks, arms trading and more.

‘The offshore financial system is a problem that should concern every law-abiding person around the world,’ former FBI officer Sherine Ebadi told the newspaper.

‘These systems don’t just allow tax cheats to avoid paying their fair share. They undermine the fabric of a good society.’