Boxing hero Amir Khan today accused Shamima Begum of giving British Muslims ‘a bad name’ as he backed the decision to tear up her passport.

Mr Khan, from Bolton, also blasted the 19-year-old’s ‘arrogant’ and remorseless interviews from Syria where she demanded ‘sympathy’ from the country she fled aged 15.

He tweeted today: ‘You left to support terrorism, now live with it. After watching her video she doesn’t seem one bit upset and comes across so arrogant. UK isn’t your home, stop giving us all a bad name please’.

Amir Khan, pictured with his wife Faryal Makhdoom, has blasted Shamima Begum and says she should be kept out of Britain for good 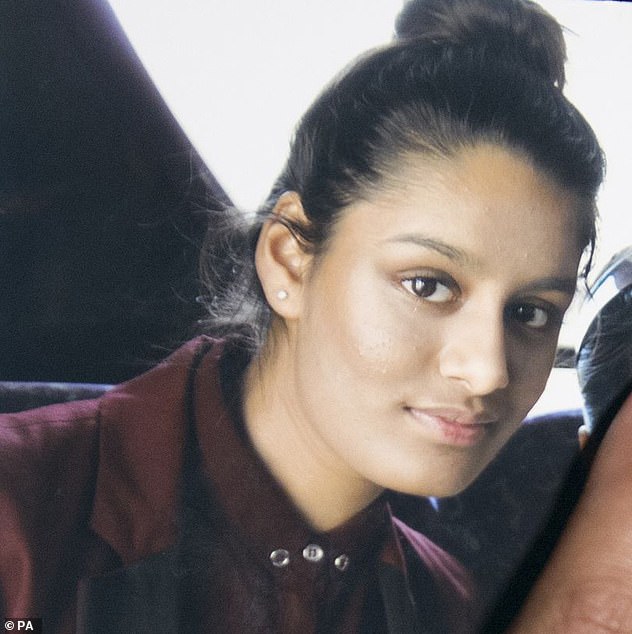 Shamima Begum, who fled the UK to join the Islamic State terror group in Syria aged 15, has been stripped of her British citizenship.

Home Secretary Sajid Javid ordered the move against the 19-year-old Londoner who wants to return to the UK with her newly-born child as the so-called caliphate crumbles.

International law forbids nations from making people stateless by revoking their only citizenship.

Britain appears to believe that Ms Begum, who is of Bangladeshi heritage, holds dual citizenship.

Under the 1981 British Nationality Act, any Briton can be deprived of their citizenship if it is ‘conducive to the public good’ – and they do not become stateless as a result.

A 2017 government report on the issue said the Home Secretary has the power to ‘deprive a person of British citizenship’ if it would be ‘conducive to the public good’.

However, this only applies if the person would not be left stateless.

If it is the case Ms Begum is a dual national, she could have her British citizenship stripped.

Begum has the right to appeal the decision to the Special Immigration Appeals Commission (SIAC).

The SIAC is independent of the Government and allows individuals to appeal against immigration decisions by the Home Office, such as deportations and the removal of citizenship.

Those who are outside of the UK have 28 days to lodge an appeal from the time they receive their Home Office letter.

Amendments were made to British national laws in 2014 which made it easier to strip dual nationals of their British citizenship.

These measures were primarily aimed at terrorists who could potentially undermine UK security, for example those who fled to Syria to fight and were attempting to return home.

There are two other instances when British citizenship can be removed, which are permissible even if the person would be rendered stateless.

Deprivation of citizenship can be made if a person obtained their citizenship through registration or naturalisation and the Home Secretary is ‘satisfied that this was obtained by fraud, false representation or the concealment of a material fact’.

Secondly, when citizenship is obtained through naturalisation and the Home Secretary believes that removing it would be ‘conducive to the public good’ because the person acted in way which is ‘seriously prejudicial to the vital interests of United Kingdom, any of the Islands, or any British overseas territory’.

The news of her lost citizenship was broken to the teenager today, who insisted: ‘It’s unjust on me and my son. It’s a bit upsetting and frustrating. It’s kind of heartbreaking to read’.

But she admitted that if Britain won’t have her Holland might because she is married to Dutch jihadi Yago Riedijk and said: ‘Maybe I can ask for citizenship in Holland. If he gets sent back to prison in Holland I can just wait for him while he is in prison’.

‘My family made it sound like it would be a lot easier for me to come back to the UK when I was speaking to them in Baghouz. It’s kind of hard to swallow’.

Referring to other returnees handled by the government, she said: ‘I heard that other people are being sent back to Britain so I don’t know why my case is any different to other people, or is it just because I was on the news four years ago?’

She added: ‘Another option I might try with my family is my husband is from Holland and he has family in Holland’.

Legal experts including Lord Carlile QC, Britain’s former reviewer of terrorism legislation, have said that it appears the Home Office does have a genuine case to revoke her British citizenship and keep her in Syria.

But her newborn son Jerah is entitled to a British passport and could be used by his mother to fight to return to Britain on human rights grounds.

Immigration lawyer Asif Salam told the Mirror: ‘The baby is British, so maintains his nationality. The child cannot possibly live without his mother, it’s not in his best interest for the child to be in the UK without the mother’.

The teenager, who fled Britain with friends aged 15 and married a Dutch jihadi, has been unapologetic about ISIS’ crimes and said the Manchester Arena suicide bombing could be considered ‘retaliation’.

She also insists that the British public should be ‘sympathetic’ towards her and should be allowed back to London with her baby on human rights grounds.

But last night Sajid Javid last night moved to block her return to Britain arguing that taking away her British citizenship is ‘conducive to the public good’ on terrorism grounds.

He said the family will ‘consider all legal avenues to challenge this decision’ in response.

Lord Carlile QC believes that Britain does have a strong case to block her from Britain.

‘She doesn’t have a Bangladesh passport and apparently she’s never been there but that doesn’t effect that issue.

‘Whether she wants to go to Bangladesh is another matter because they take quite a dim view of violent jihadism’. 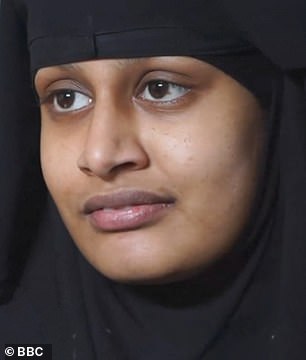 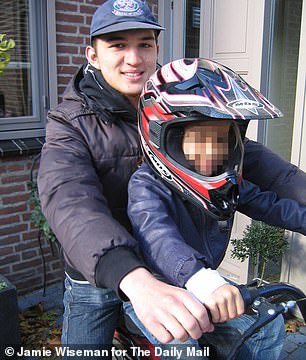 He added: ‘She can challenge the Home Office – she is entitled to do that – but the test will be one of reasonableness and proportionality so she would have to establish that the Home Secretary acted in an entirely disproportionate way in removing her nationality. That might be difficult for her because he appears to have acted within the law if she is entitled to Bangladeshi nationality’.

Even terror-bride’s FAMILY think Javid was right to strip her of UK citizenship: Shamima Begum’s brother-in-law says government was right to take her passport away

The brother-in-law of the IS bride, Shamima Begum, said today he supports the decision to strip the schoolgirl of her UK citizenship.

Muhammad Rahman, 36, said today that the British public should get behind the government revoking the 19-year-old’s passport.

He said: ‘I think we should support it, they [the government] are the people who are in the position to make the decision.

‘The people who are making these decisions are doing it for the country.

‘They don’t have an easy job, you can’t please everyone.

‘The information they have is to the best of their ability and the British people should support it.

‘I last spoke to Shamima when she was very young. I think it is upsetting for my sister-in-law and her side of the family.’

Begum’s baby son Jerah is entitled to British citizenship – but could try to argue he is Dutch because of the nationality of its jihadi father Yago Riedijk.

‘Dutch law is a little different. If the father, who is apparently still alive, says the baby is his then the baby can also receive Dutch nationality. So that means that the Home Secretary could exclude the baby from Britai because the baby would not be stateless’.

He added: ‘This is going to drag on for months or even year’.

Mr Khan continues to be outspoken about his faith despite criticism from more conservative Muslims.

In December he was accused of ‘disobeying Allah’ after he posted a Christmas-themed picture on his Instagram account.

The Bolton-born boxer posted a picture of himself in a Santa hat, with the caption: ‘What you all wanting for Christmas?’

But while many fans joked about who they want to see him fight in the New Year, others took exception to the post.

One of his followers, called Wasiafg90, wrote: ‘I think you don’t know nothing about Islam’

Another commented: ‘It’s very unfortunate to see that you are waiting for it. Don’t you know your are disobeying Allah.’

Other followers told the boxer that Christmas is ‘haram’, a term meaning forbidden under Islamic law.

But many fans weighed in to defend Khan.

An Instagram user called Sanjar Hussain wrote: ‘Guys he’s doing this because not all his fans are Muslim.’

Another wrote: ‘You don’t know Asians who live in Britain. Everyone to a point dabbles in the festivity of the nation they are born in.’

Khan’s wife Faryal Makhdoom also came under fire after she posted a photo of her and her husband at an awards event, days after she completed Umrah – the holy Islamic pilgrimage to Mecca.

On that occasion, a critic wrote: ‘One day in Allah’s house wearing nikab and the next with her legs out.’

Faryal hit back at the comments, slamming those who ‘judged’ her. 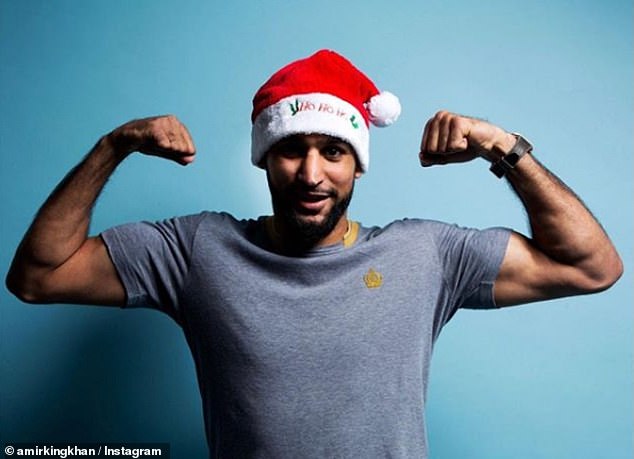 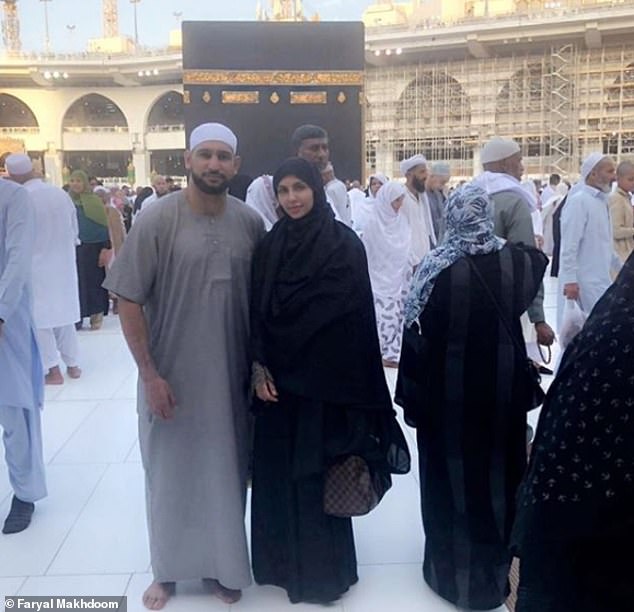 Revealed: At least 12 MORE British women besides ISIS bride Shamima Begum have arrived at Syrian refugee camps in the past week

Twelve other British jihadi brides have arrived at Shamima Begum’s refugee camp since she started her campaign to return to Britain, it emerged today.

The dozen-or-so women have also fled ISIS’ final battle in Baghuz and arrived at the al-Hawl settlement in northern Syria.

The Home Office will be forced to make a decision on whether they too should have their British citizenship taken away like Begum.

These British women have run away as the caliphate crumbles with their husbands either killed or captured.

Britain could be forced to take back dozens of these other jihadi brides fleeing their collapsing caliphate. 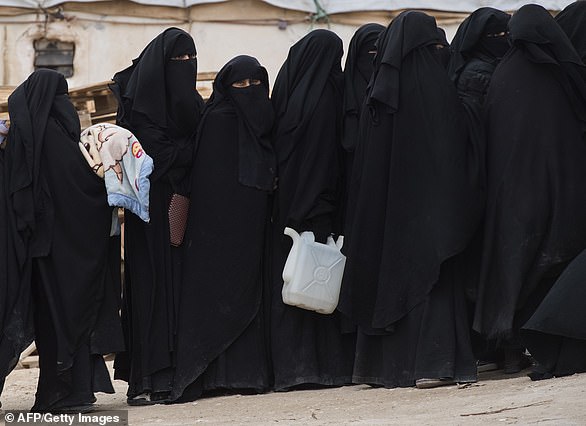 Last week it emerged that ‘tens’ more jihadi brides are poised to come back to Britain as their medieval caliphate is finally driven into the ground.

Miss Begum was just 15 when she and three fellow pupils from Bethnal Green Academy tricked their parents four years ago and flew to Syria to marry ISIS fighters.

There is furious opposition to the idea of Britain welcoming them back when they chose to embrace a terror organisation that horrified the world with videos of hostages such as volunteer aid worker Alan Henning being beheaded.

UK taxpayers could face enormous costs in repatriating the women, who will need to be kept under security service surveillance as well as being given protection against potential vigilante attacks.

BBC correspondent Quentin Sommerville, who has interviewed Begum, revealed that the British jihadi brides have arrived in force.

He said: ‘This whole issue of what to do with these IS women and other IS supporters isn’t going to go away.

‘We know that in the last week alone, 12 British women have arrived at displacement camps here in northern Syria. So for the British Government, this headache of what to do doesn’t end with Shamima Begum.’