An Amtrak train carrying 183 passengers has been at a standstill in the snow in Oregon for a day and a half.

The Coast Starlight train left Seattle on Sunday morning and was due to arrive in Los Angeles on Monday but got stuck after hitting a downed tree in Oakridge, Oregon.

Large amounts of snow and ice on the tracks have made it difficult for anyone to reach them.

The train has been there since around 6.30pm on Sunday night and there is no indication of when it will be able to move again.

Since then, there have been failed repair attempts and promises that another train will come soon to tow it away but none have amounted to anything.

A passenger sleeps on the stranded Amtrak train in rural Oregon. It was brought to a standstill on Sunday at 6.30pm after hitting a downed tree. Now, because the tracks are covered in snow, crews have not been able to get to it and the passengers are stuck 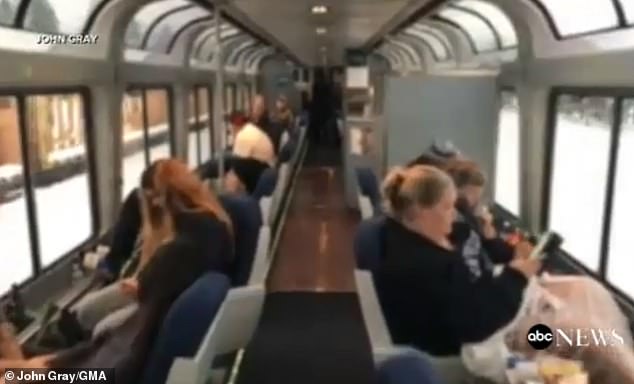 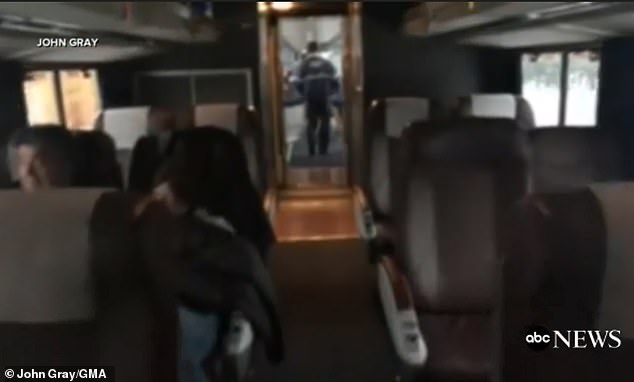 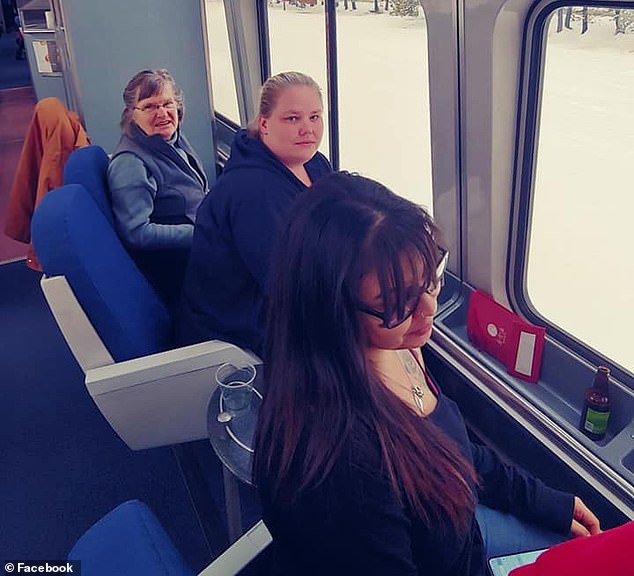 Passengers wait for news on the Amtrak stuck near Oakridge, Oregon. There is no word from Amtrak on when they will be rescued 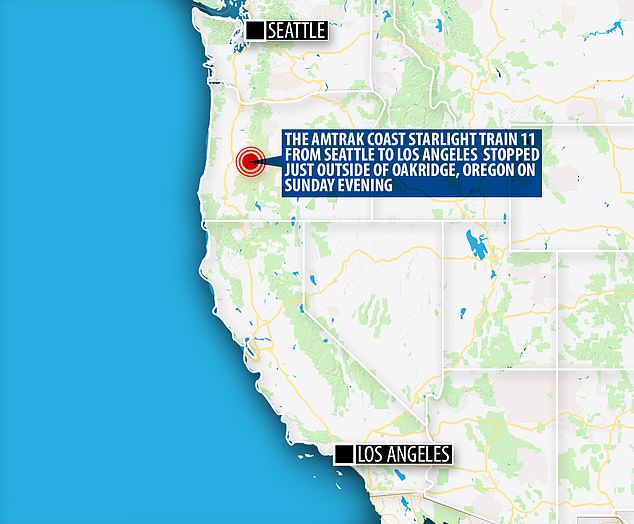 The Coast Starlight travels from Seattle to Los Angeles, stopping along the way in towns and cities in Washington, Oregon and California. The train came to a stop in Oregon on Sunday night

The journey takes 35 hours and travels down the West Coast.

Tickets range in price from $124 for the most basic seat to $531 for a premium cabin with a bed.

The train was in between Eugene-Springfield and Chemult in Oregon when it came to a halt.  Temperatures in the area have hovered around 30F over the last few days and around 14 inches of snow fell between Sunday and Monday night.

The passengers are now running low on basic supplies including food, water and diapers.

Images taken inside the carriages shows them huddling together and sleeping under their coats while they wait to be rescued.

There was a snow storm in the area on Sunday which caused widespread power outages and because there are only two small hotels nearby, Amtrak has said it is safer for the passengers to remain onboard where they have electricity.

‘We can’t get off the train because there’s four feet of snow in every direction.

The passengers are becoming increasingly frustrated by Amtrak’s lack of communication. 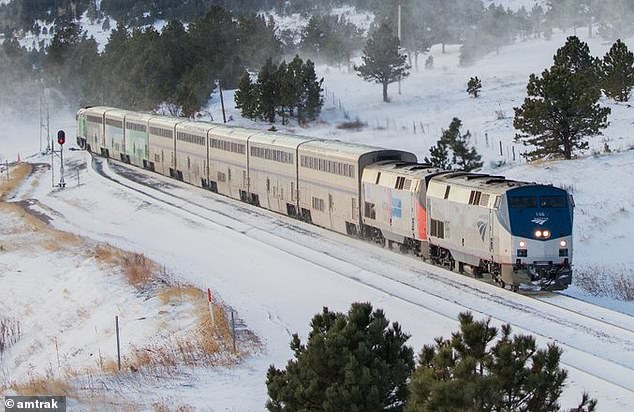 The passengers are onboard an Amtrak Coast Starlight (file image shown) which travels down the West Coast from Seattle to Los Angeles, stopping along the way in various towns and cities in Washington, Oregon and California 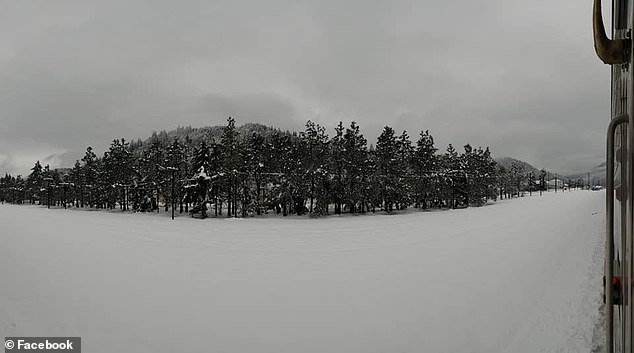 This is the view of where the train is stuck. It is around 45 miles from the nearest town but the tracks are covered in thick snow and ice

They say the last update they were given was on Monday night at 6.30pm when an announcer told them someone was going to play the ukulele for the children onboard.

‘It’s been difficult to keep people’s panic down and morale up because we have no idea when we’re getting off.

On Facebook, Dodson said she was one of the few people who had phone service and had to lend her cell out to others.

‘This is hell, and it’s getting worse…lending people my phone, one of the few with service, helping people out of panic attacks and chasing down toddlers,’ she said. 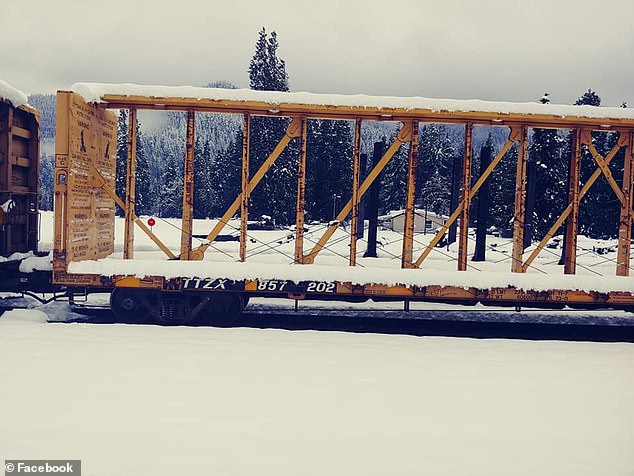 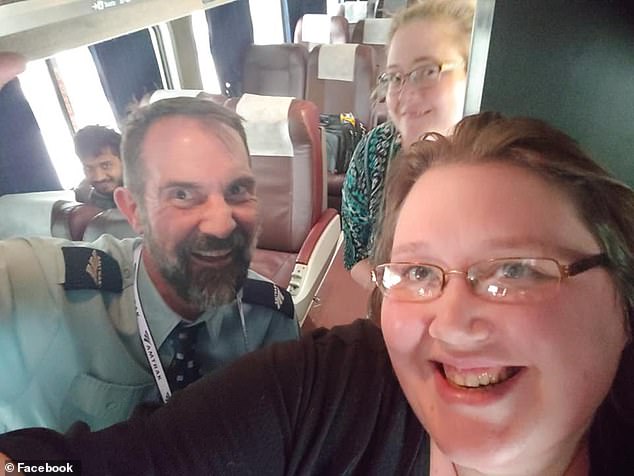 Despite the declining conditions onboard, passengers are trying to maintain their high spirits

Others told how they were trying to keep themselves entertained.

‘[There have been] a lot of card games, talking, sharing stories. Some guy pulled out a ukulele to get some kids to sleep. It’s a big kumbya party,’ one told CNN.

The only people who have been allowed to get off the train are those traveling with pets.

Two dog owners have been able to take the animals outside periodically in order for them to go to the bathroom but everyone else has been told they have to stay on board.

Amtrak did not immediately respond to DailyMail.com’s inquiries. 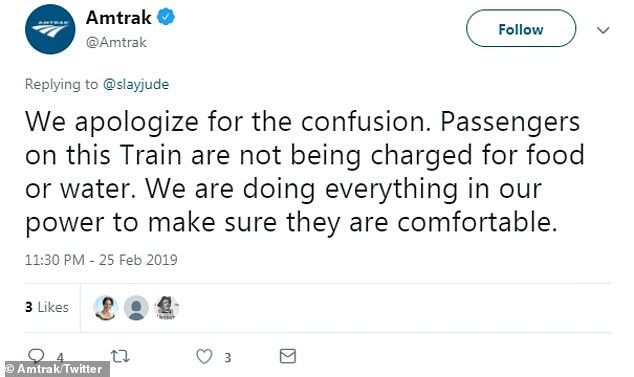 Amtrak did not respond to DailyMail.com’s inquiries on Tuesday morning. It has shared very little information about the incident on Twitter