Amy Coney Barrett is CONFIRMED to the Supreme Court by Senate

Amy Coney Barrett was confirmed to the Supreme Court Monday evening by the Senate in a 52-48 vote – with Republican Susan Collins crossing the aisle to vote against her.

Donald Trump’s third nominee was not in the chamber to watch the roll call vote, which allows her to join the eight justices on Tuesday morning, and potentially to decide on cases about voting before the November 3 election.

Senate president pro tempore Chuck Grassley declared her confirmation at 8.06pm; outside the Supreme Court conservatives chanted Coney Barrett’s name as soon as she was confirmed.

Her confirmation transforms the court to a 6-3 conservative majority and comes after fierce opposition from Democrats, whose presidential nominee Joe Biden has resisted pressure to promise to pack the court if he wins – but who says he will order a commission on reforming the high court.

Before the final vote she was praised by Republican majority leader Mitch McConnell who said: ‘By every account, the Supreme Court is getting not just an outstanding lawyer but a fantastic person.

‘This is one of the brilliant, admired and well-qualified nominees in our lifetime,’ he said.

She will be the only justice confirmed with a law degree from ‘any school not named Harvard or Yale.’

The newest justice: Amy Coney Barrett, 48, was confirmed on Monday evening 52-48 by the Senate and will be able to join the other justices Tuesday morning 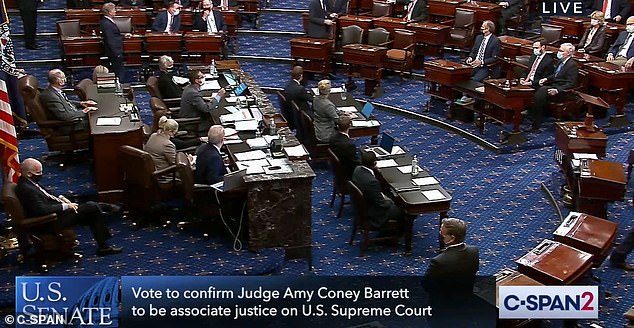 Voting under way: The final minutes before Amy Coney Barrett was confirmed to be the ninth justice of the Supreme Court 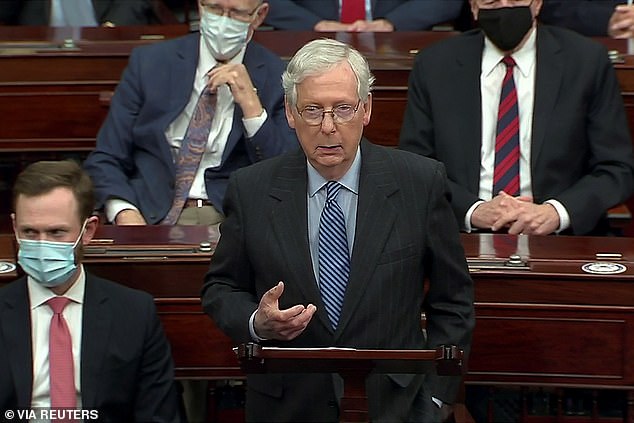 Three for three: Mitch McConnell, the Republican leader, has now shepherded Neil Gorsuch, Brett Kavanaugh and Amy Coney Barrett on to the high court – each one in controversial circumstances 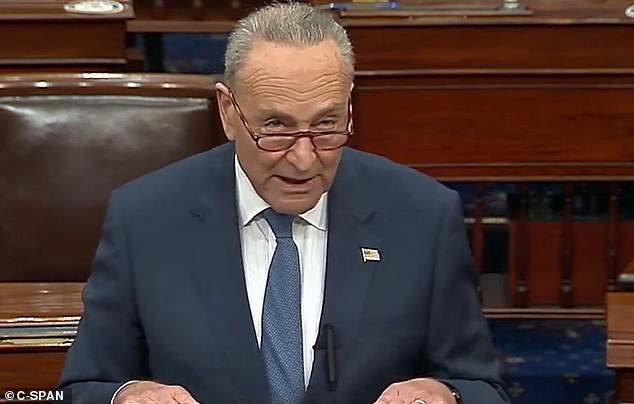 Objection: Democratic minority leader Chuck Schumer said that Republicans have tarnished themselves with the rush to put Barrett on the seat instead of letting voters decide the next president and allowing them to nominate a replacement of Ruth Bader Ginsburg

McConnell added in an acknowledgment of the controversy over killing Rhth Bader Ginsburg’s seat days before the election and in defiance of her dying wish: ‘I think we can all acknowledge that both sides in the Senate have sort of parallel oral histories about the last 30 or so years.

‘Each side feel the other side struck first and struck worse.’

Democratic leader Chuck Schumer, however, scorned the process which saw Coney Barrett confirmed on the eve of an election when McConnell had stopped even a hearing for Merrick Garland, Barack Obama’s nominee, in 2016.

‘You may win this vote. And Amy Coney Barrett may become the next Associate Justice of the Supreme Court. But you will never, ever, get your credibility back,’ he said to Republicans on the Senate floor.

Democrats had made the nomination before an election the center of their case against her, and highlighted her conservative rulings while a federal appeals court judge.

They had also warned that she may vote down Obamacare, move to overturn Roe v. Wade, which enshrines women’s right to choose, and imperil restrictions on gun ownership, but could not stop McConnell’s express train to fill the seat before the election.

The 48-year-old becomes the youngest member of the court, and almost certainly one of its most conservative.

But with Collins – whose re-election in Maine next week is already in jeopardy, according to polls – voting against Coney Barrett, she is the only one of Trump’s nominees not to have at least one Democratic vote, and the only one with a Republican voting against her.

Justice Clarence Thomas is on the docket to swear in the 7th Circuit appellate judge to the Supreme Court at a White House ceremony.

White House chief of staff Mark Meadows sought to assure reporters Monday that the Rose Garden ceremony would include safety precautions, but he did not say whether face coverings would be required.

‘We’re doing tonight the best we can to encourage as much social distancing as possible,’ he said. 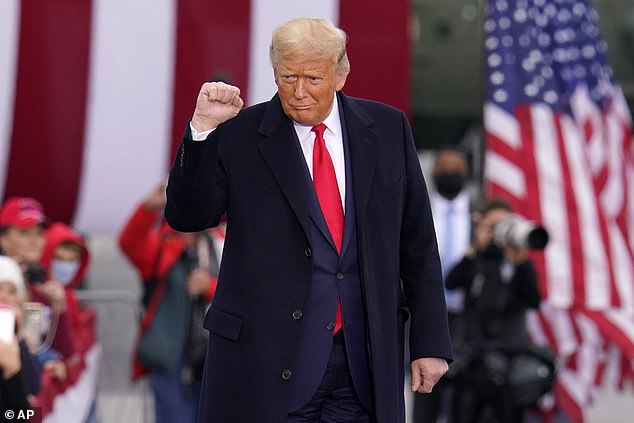 Three seats: Donald Trump got his third nominee confirmed with just eight days to go until the election – which Amy Coney Barrett may well become involved in deciding the outcome of 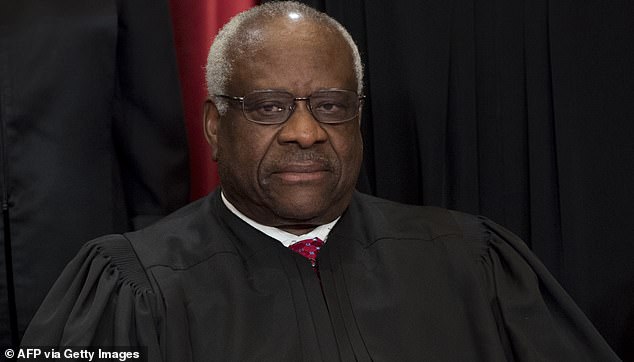 Supreme Court Justice Clarence Thomas, 72, will swear in Amy Coney Barrett to the Supreme Court in a White House ceremony as soon as she is confirmed in the Senate vote Monday evening 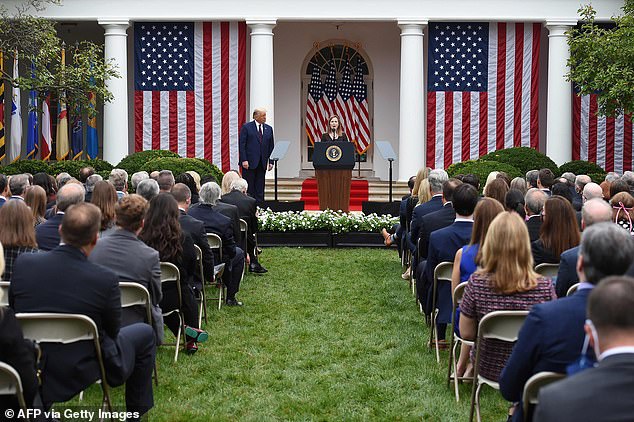 The White House is planning a Rose Garden celebration of her confirmation, similar to the ‘superspreader’ event announcing Barrett’s nomination last month that sparked a White House coronavirus outbreak – infecting the president, first lady and their son, as well as several top aides and lawmakers

The plans had set off alarm bells as it sounds eerily similar to the Rose Garden event last month when Trump announced Barrett’s nomination, inviting a whole crowd of aides, advisers, lawmakers and supporters to witness the occasion.

That event sparked a White House outbreak of COVID-19, which infected the president, first lady Melania and their son Barron, as well as about a dozen others within Trump’s inner circle.

Not present in the Senate was Mike Pence. Pence announced earlier Monday that he was ditching his plans to attend after Democrats demanded he steer clear of the Capitol as five of his aides tested positive for coronavirus.

The White House, however, is still looking to hold a Rose Garden celebration with a ceremonial swearing in of Barrett either Monday or Tuesday.

Speaking to reporters on the tarmac at Lehigh Valley International Airport in Pennsylvania on Monday, President Donald Trump assured the celebration would be a rather small, ‘very nice event.’

On Sunday, the Senate held a procedural vote to advance Barrett’s nomination and kicked off 30 hours of debate, which will clear the way for a vote Monday evening.

‘This is something to be really proud of and feel good about,’ Senate Majority Leader Mitch McConnell said during a rare weekend session.

McConnell lauded that Democrats ‘won’t be able to do much about this for a long time to come’, in contrast to legislative actions, which can be undone with new executive or legislative terms.

Barrett, a 48-year-old appellate judge for the 7th circuit, is a staunch Roman Catholic and life-long conservative. Her personal pro-life views have raised eyebrows among progressives who claim she will dismantle a woman’s right to an abortion by working to overturn Roe v. Wade.

She is a member of People of Praise, a small and ultra-conservative charismatic group whose members speak in tongues.

Republicans had painted questions over her faith as an attack on Catholics at large and Democrats had steered clear of the group in their questions to her.

Her lifetime appointment to the highest U.S. court will also drastically change the makeup of the Supreme Court for a generation to come.

The mother of seven – five biological and two adopted from Haiti – has embraced her classification as the ‘female Antonin Scalia’ and says his jurisprudential practice of ‘applying the law as written’ will be how she serves.

During the three days of confirmation hearings earlier this month, including a day of opening statements and two days of questioning, Barrett reiterated her stance as a textualist and originalist, stressing this means she would apply the Constitution to cases as it’s written and was intended by the drafters.

In the short term, Barrett could help decide election and voting-related issues as the vote on her confirmation comes just over a week before Election Day.

Donald Trump has made it clear he feels the results of the election could end up at the Supreme Court – and with a conservative majority of 6-3 with Barrett seated, it’s more likely they would rule in favor of the president.

Also about a week after the election the Supreme Court will take up a case on the Affordable Care Act, which Democrats fear will be overturned if Barrett has anything to say about it.