An awfully tasty tale: The witch is out for revenge in David Walliams’s sequel to Hansel & Gretel

An awfully tasty tale: The witch is out for revenge in David Walliams’s deliciously dark sequel to Hansel & Gretel

By James Rampton For Weekend

The wicked, child-eating witch still lives in a house made of sweets, and Hansel and Gretel are still lured into her clutches – but the latest of David Walliams’s After Ever After fairy tale sequels imagines what happens when the witch survives being burned alive, as she is in the original Grimm Brothers’ story.

With her wig, snaggly teeth and crooked nose, Sheridan Smith – who appeared in David’s festive series last year as the giant-hunting Woman with no Name in Jack And The Beanstalk – is unrecognisable as the witch. And she believes Hansel & Gretel is an excellent choice as it has the sinister tone of the very best fairy tales.

‘I was so scared of it as a child because it’s about abandonment in the woods,’ she says.

David Walliams’s latest After Ever After fairy tale sequel imagines what happens when the witch from Hansel and Gretel survives being burned alive. Pictured left to right: Bill Bekele, Sheridan Smith, David Walliams and Lilly Aspel 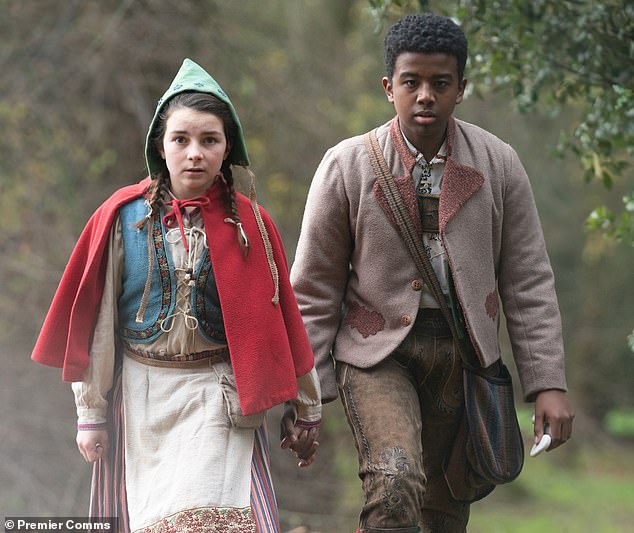 Bill Bekele stars as Hansel alongside Lilly Aspell as Gretel (pictured), who return to their unexpecting parents in an attempt to right some wrongs

‘In this show the witch comes back to the village where they’re all having a big “The witch is dead” party. She arrives disguised as a washerwoman, then starts planting trees of chocolate oranges and toffee apples. She’s trying to fatten the villagers up ready to eat them all.’

At the same time, Hansel (Bill Bekele) and Gretel (Lilly Aspell) have returned home after escaping from the witch’s cottage, much to the disappointment of their horrid father (Mark Addy) and stepmother (Sophie Thompson).

‘They weren’t expecting the kids, but they’ve returned to right some wrongs,’ says Mark. ‘And I got to wear lederhosen!’

Sophie is teaming up with David again after appearing alongside him in Ratburger and Sandylands.

‘This one is very dark, but I love the way David has mixed it up,’ she says. ‘And there are surprises like David appearing as a troll. I’m grateful to be doing something daft that all ages are going to enjoy.’

Sheridan is already looking forward to next year’s instalment. ‘If David asks me I’ll do it in a heartbeat,’ she says. ‘I don’t mind sending myself up, and it’s great to play the baddie.’

Hansel & Gretel: After Ever After, Thur, 8pm, Sky Max.