These structures take the world of architecture to a whole new level – and into outer space.

The shortlist for the 2022 World Architecture Festival (WAF) has been revealed, with ‘some of the most bold, beautiful and innovative projects from around the world’ making the cut.

Some of the standout projects, which were selected from hundreds of entries from more than 50 countries, include an art storage facility in the Netherlands crafted from 1,664 mirrored panels, a VIP terminal at Istanbul Airport inspired by a flower, an incredible 70,000-seater NFL stadium in California with a dramatic curved roof, and an eye-catching reimagining of the area around the Eiffel Tower that will be launched ahead of the 2024 Paris Olympics. There’s even a mesmerising Martian colony vying for a gong.

The overall winners for categories including the World Building of the Year, the Landscape of the Year, and Future Project of the Year will be announced at this year’s WAF festival, which will be held in Lisbon from November 30 to December 2.

Commenting on the designs, WAF programme director Paul Finch said: ‘The number and quality of entries this year has been very encouraging, and we are looking forward to meeting in person to carry out category judging and then our best-in-show awards. WAF, the outstanding live event in the world of architecture, celebrates its 15th year in 2022.’

Architects from HKS were behind this slick NFL stadium in Inglewood, California. The SoFi Stadium, completed in May 2021, is now the NFL’s largest ground with 70,000 seats and serves as the home of the Los Angeles Rams and Chargers. The designers said that the curved roof was inspired by the shape of the coastline. The outer side of the roof has an LED system that can project images of live events from inside the stadium, which can be seen from the air by passengers flying to and from LAX airport. Along with a sports pitch, the 298-acre (120-hectare) site includes a 6,000-seat venue for music gigs and ’25 acres (10 hectares) of parks and open space’. The complex has been shortlisted in the ‘WAF Completed Buildings: Sport’ category 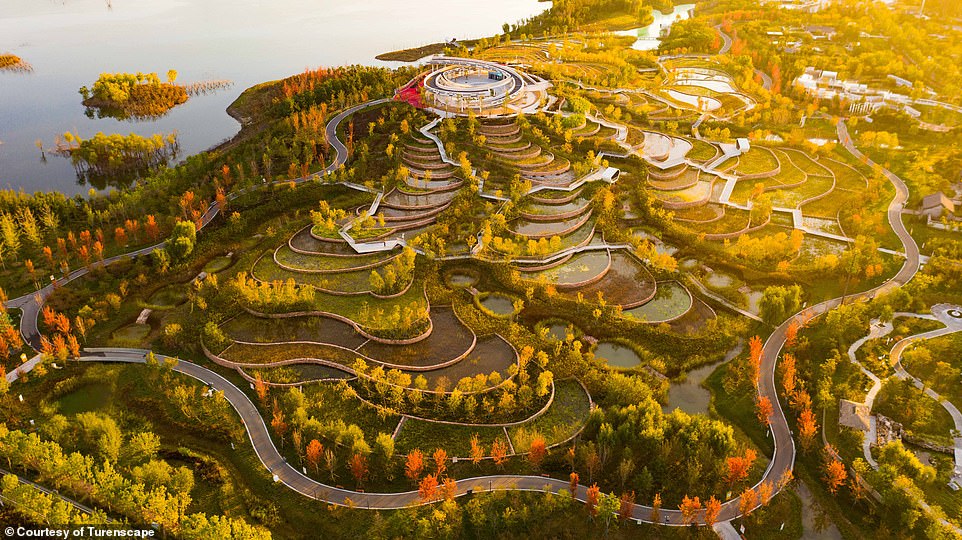 The Handan Wastewater Cleansing Terraces, designed by architecture firm Turenscape, has been shortlisted in the ‘WAF Landscape: Rural’ category. This terraced development in Handan City, China, helped transform an area of wetland where ‘urban waste’ was previously dumped. It features a cleansing system that discharges purified water ‘into the adjacent wetland to help restore the degraded wetland ecosystem’. A network of boardwalks was built throughout the development, connecting observation points and allowing for data collection. The architects said: ‘The project showcases how wastewater and land can simultaneously provide clean water, ecosystem benefits and scientific data, as well as beauty’

While it might look like a structure from outer space, this building is actually located in the Al Sajaa desert outside the city of Sharjah, UAE. The architectural wonder, designed by Zaha Hadid Architects and constructed for environmental management company Beeah Group as its new headquarters, has been shortlisted in the ‘WAF Completed Buildings: Office’ category. The designers said the dune-shaped complex was crafted to blend in with the surrounding desert and has been predominantly made from ‘locally procured materials’. Powered by solar energy, the 9,000-sq-m (96,800-sq-ft) development has sustainability at ‘its core’, the designers added 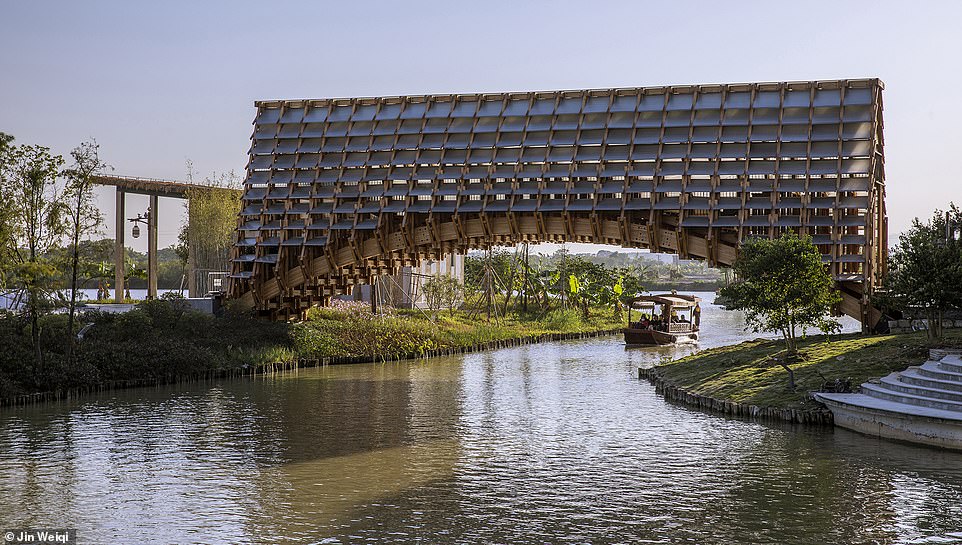 This unusual timber bridge – shortlisted in the ‘WAF Completed Buildings: Transport’ category – was installed in Gulou Waterfront Resort on the outskirts of the city of Jiangmen in southern China. It connects a commercial street with a children’s recreation area, with architecture firm Luo Studio explaining that the arched design, using natural wooden materials, ‘differentiates [the bridge] from urban constructions’ and helps to ‘revitalise traditional rural culture’

The eye-catching Shuikou Mountain Workers Movement Memorial Museum in the mountain town of Shuikou in China’s Hunan Province has been shortlisted in the ‘WAF Completed Buildings: Culture’ category. Completed in January 2021, the museum honours the major workers’ movement that took place in Shuikou’s lead-zinc mine during the 1920s. It saw miners strike for higher wages and better working conditions, according to the LA Times. The designers said that they wanted the structure to look like ‘a solid mass that has been split apart’ to evoke a feeling of ‘tension and resolve’ 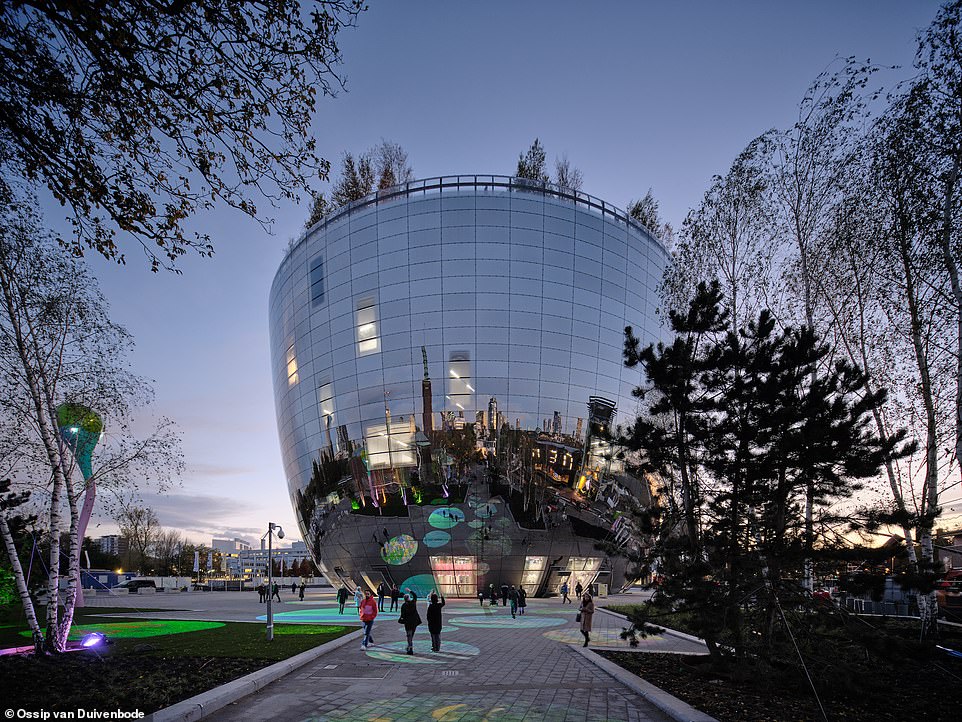 Above is the first publicly accessible art storage facility in the world. It’s located in the Dutch city of Rotterdam and called Depot Boijmans Van Beuningen. It stores extra artwork from the nearby Museum Boijmans Van Beuningen art gallery in glass display cases. The structure, which has been shortlisted in the ‘WAF Completed Buildings: Culture’ category, features a rooftop garden and a mirrored exterior made from 1,664 panels, to ensure that the building ‘visually blends into its surroundings’. Commenting on the building’s design, architecture firm MVRDV said: ‘The ambition was to create a building that seems to disappear into its surroundings, but at the same time is a safe house for the collection, which is worth billions… inside, the most eye-catching part of the building is the atrium, with its criss-crossing staircases and windows into the storage spaces’ 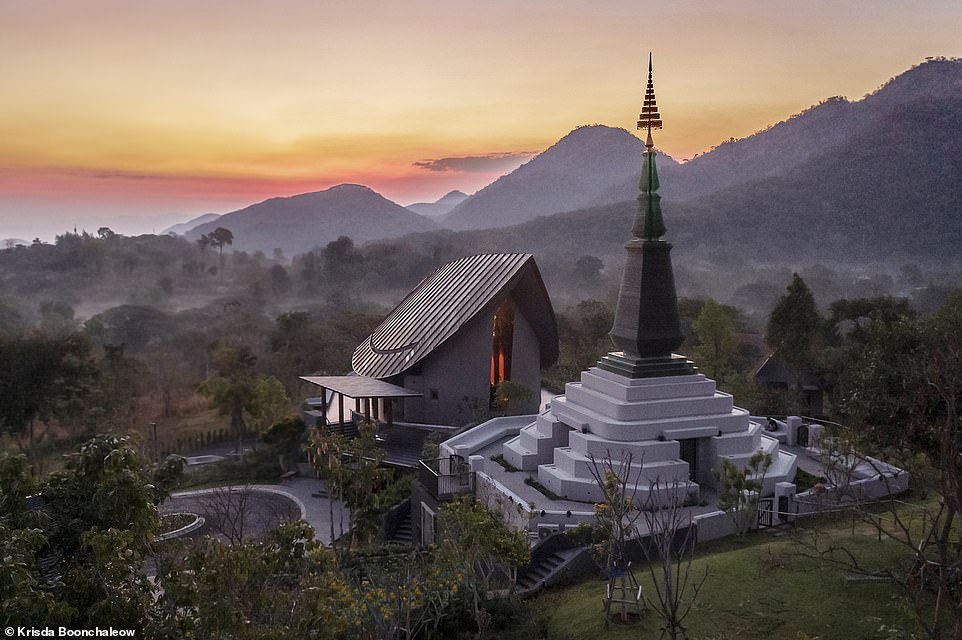 This fairytale-esque meditation centre was built in the countryside near the Thai city of Nakhon Ratchasima. Designed by the international firm Architects 49 Limited, the structure has been shortlisted in the ‘WAF Completed Buildings: Religion’ category. Commenting on the design, the architects said: ‘The complex of buildings is designed to be unique, elegant, and distinct, with a natural form that merges art and architecture imbued with the Thai spirit. The contemporary architectural design focuses on minimalism and the philosophy of sufficiency which promotes the teachings of Buddhism’ 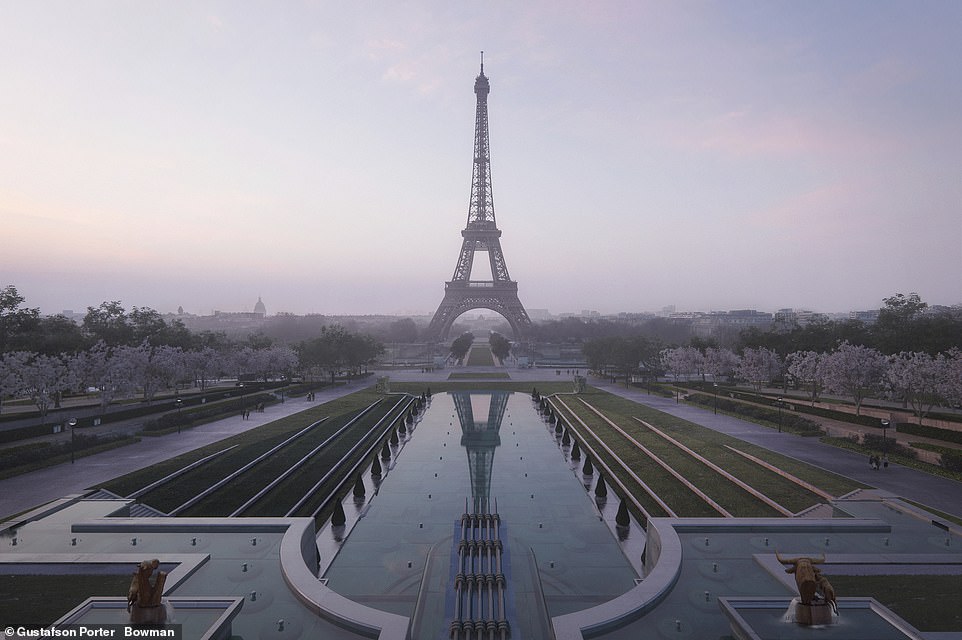 Site Tour Eiffel (shown in the rendering above), designed by the architecture firm Gustafson Porter and Bowman, reimagines the area around the Eiffel Tower, introducing raised lawns, an amphitheatre and a ‘green bridge’ that spans the Seine River, replacing the Pont d’Iena bridge. There’s also a ‘planted landscape’ beneath the Parisian landmark. The design, which has been shortlisted in the ‘WAF Future Project: Masterplanning’ category, is in the first phase of redevelopment and is set to be completed in late 2023 as part of the city’s showcase for the 2024 Olympic Games 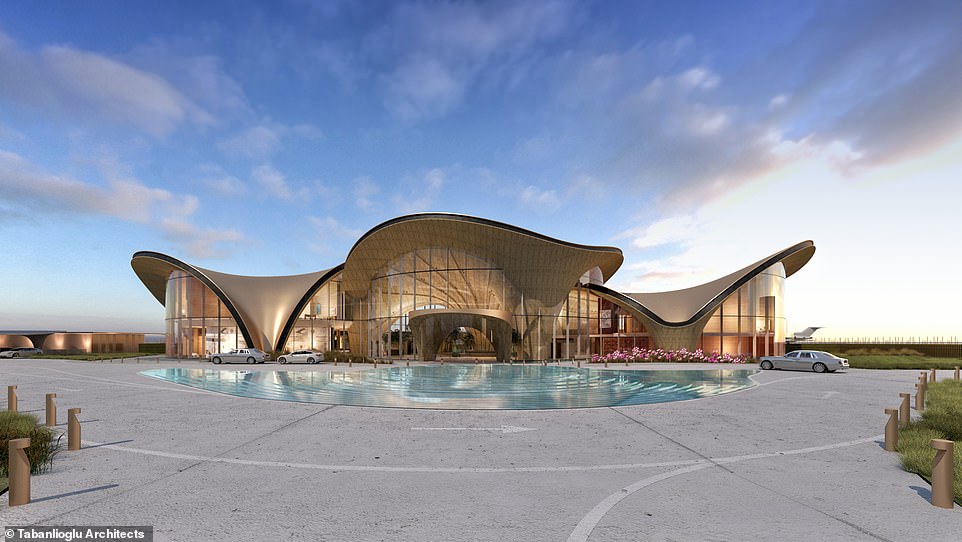 Tabanlioglu Architects designed this VIP airport terminal (shown in the rendering above) for Istanbul Airport, with completion set for June 2024. The hub, shortlisted in the ‘WAF Future Project: Infrastructure’ category, has an ‘organic’ shape inspired by the petals of a flower, revealed the architects. Inside, private jet passengers and VIP long and short-haul flyers will find a gaming area, ‘suites’ and a spa, as well as cafes, restaurants and lounge areas 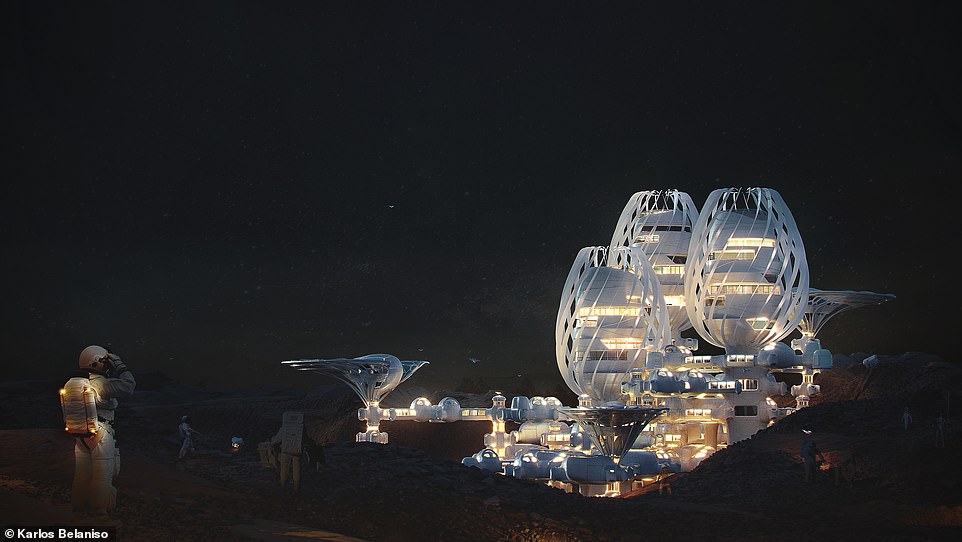 Is this what the future will look like? Behold Hexarion, a conceptual infrastructure plan for a ‘liveable Martian colony’ that is capable of ‘harnessing its own energy, food, oxygen, and other essential elements’. It has been designed by Philippines-based architecture firm Ber Sab Arc Design Studio and was shortlisted in the ‘WAF Future Project: Competition entries’ category 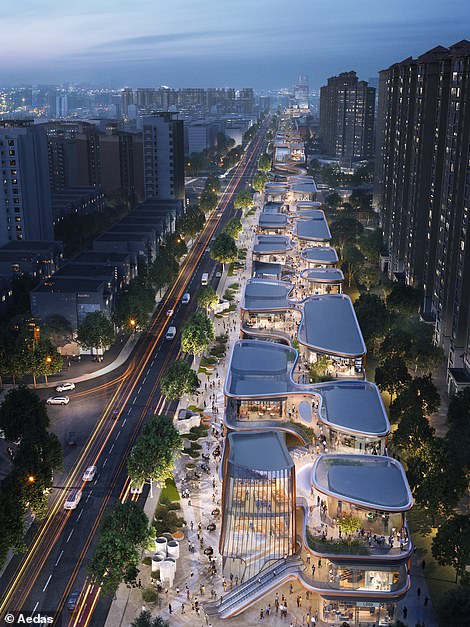 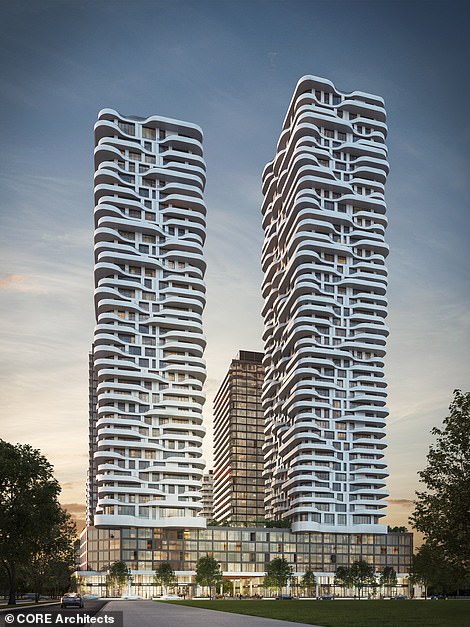 LEFT: The ‘Hyperlane Park’ concept was designed for the Chinese city of Chengdu by architecture firm Aedas as a ‘model for future urban leisure’. Spanning 2.4km (1.5 miles) in length, the complex is made up of 12 plots of leisure and retail spaces. All of the spaces are connected via a ‘sky garden corridor’ that overlooks the city. The designers said: ‘The project is designed to be a recreational urban hub to accommodate social gatherings, outdoor leisure activities and exciting retail experience.’ The concept has been shortlisted in the ‘WAF Future Project: Leisure Led Development’ category. RIGHT: A rendering of 180 Steeles, a residential tower block complex by Core Architects, designed to be built in the suburbs of Toronto, Canada. The design has been shortlisted in the ‘WAF Future Project: Residential’ category. There will be six towers in the development – ranging from 16 to 45 storeys, holding condominiums on the upper floors and retail units at the base. ‘These towers are wrapped with architecturally distinctive strips of balcony,’ the designers reveal

Camouflaged by foliage, the structure shown in the above rendering has been imagined by Philippines-based WTA Architecture and Design Studio. Set to be completed by 2025, the building was shortlisted in the ‘WAF Future Project: Competition entries’ category. It will serve as a new currency production facility for Bangko Sentral ng Pilipinas, a Philippines bank, in an up-and-coming area known as New Clark City in the country’s Tarlac province. The architects said: ‘The security plant complex will be the first central bank facility in the world to also serve as a sanctuary for our living environment… [with a living facade showcasing] over 250 endemic Philippine trees and an exposition of tropical shrubs and plants’ 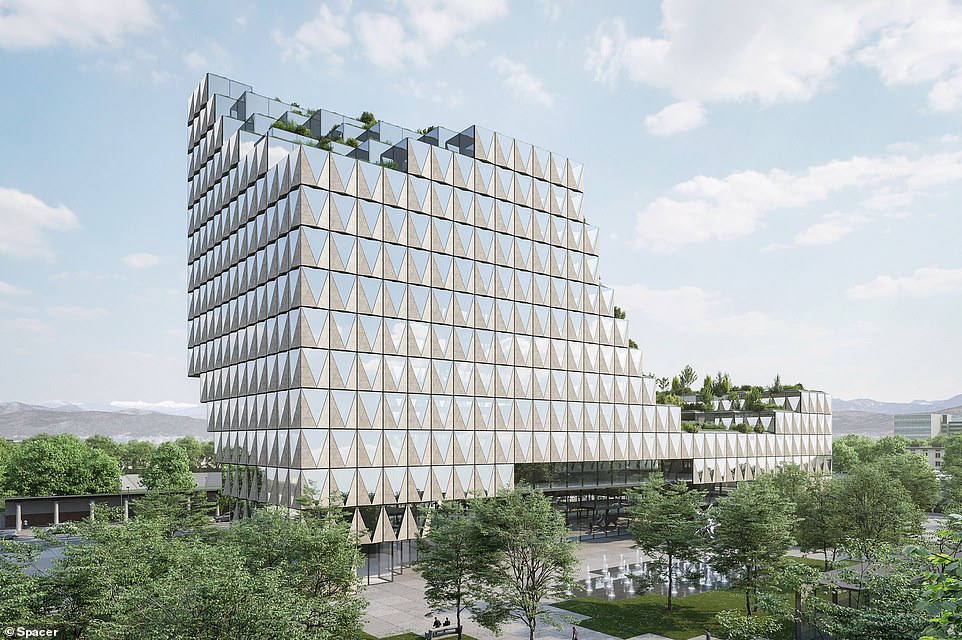 A rendering of a striking office building in Ljubljana, Slovenia, designed by architecture firm Enota. The ‘Petrol Corporate Building’ was shortlisted in the ‘WAF Future Project: Office’ category, and it has been designed for a ‘company that is transforming itself from an oil trader to a provider of green energy’. The designers note that the building’s green roof ‘increases the quality of the working environment and emphasizes the environmentally friendly orientation of the company’ 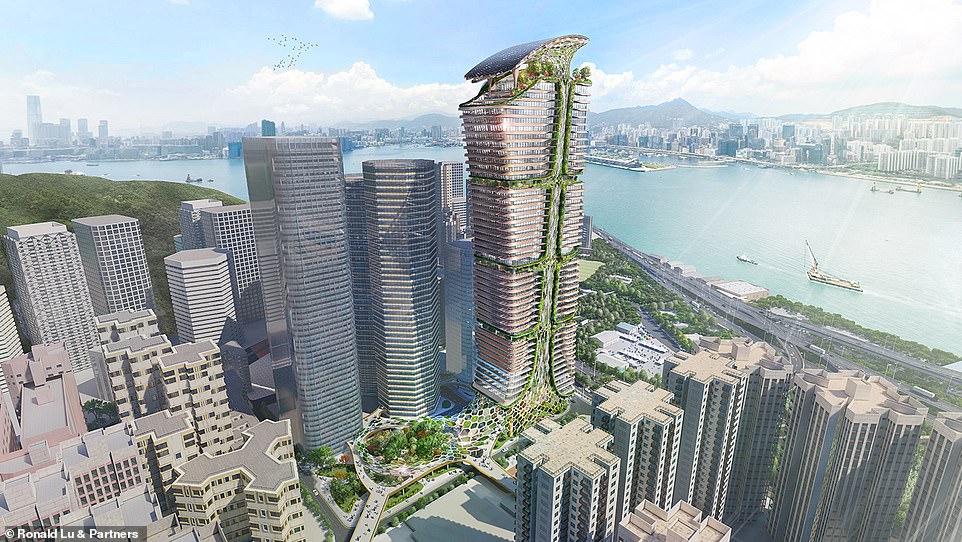 The above rendering shows ‘Treehouse’, visualised by Ronald Lu & Partners, a design that certainly adds a touch of greenery to the Hong Kong skyline. The skyscraper, which has been shortlisted in the ‘WAF Future Project: Office’ category, is described as a ‘net-zero, wellness-focused workplace envisioned for the climate change generation’. It features an ‘urban woodland’, ‘sky gardens’ and ‘external and interior green walls and roofing’