‘Are you OK?’ asks a kindly woman who is possibly the manager. ‘Sort of,’ I reply. In fact, I’m becoming increasingly agitated. My wallet is lost and I’ve been searching all over the car for it. ‘You’ve probably left it at home,’ she says, with no apparent concern there could be issues when it comes to paying the bill.

But not fretting is in keeping with the spirit at the white-washed Crab & Lobster in Sidlesham, West Sussex, near the tidal mudflats of Pagham Harbour.

Our room (there are only four) is a deluxe first-floor double. It’s gorgeous, with subtle shades of green and pink velvet cushions. My wife says the large bathroom would not be out of place in a chic New York hotel. Not that she has stayed in many chic New York hotels.

Gorgeous: The outside of the white-washed Crab & Lobster in Sidlesham, West Sussex

It’s a pity that you can hear the noise emanating from above and below quite so readily, but this is a restaurant-with-rooms at the top of its game.

The menu is big on local produce (Selsey crab, Tinwood sparkling wine). My hearty mackerel scotch egg with Bloody Mary sauce is exceptional — and look out for the devilled crab with pak choi.

My wife opts for paella, only to be served brill fillet with oyster fritter and new potatoes. For dessert, she’s given a chocolate tart instead of parfait.

With apologies to Oscar Wilde, to botch one course may be regarded as a misfortune, to botch two looks like carelessness.

But, as quick as a windsurfer zipping across Pagham Bay, the dish is replaced and we are told one main course will be taken off our bill. We think that’s too generous — not least because it’s all so good — and insist on paying full whack. 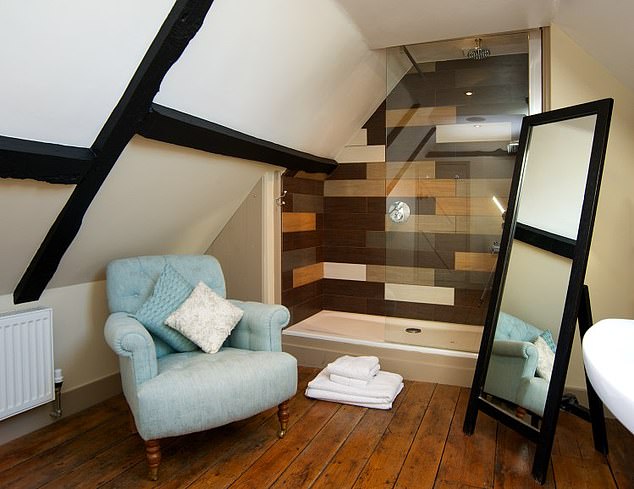 New York chic: Pictured above is one of the bathrooms

Next morning, after our breakfast of poached haddock and eggs, we take a squelching walk across the wetlands of Pagham Harbour, moments from our doorstep. It’s a reserve renowned for birdlife, and gloriously unspoiled.

Low tide approaches. The water has bled out to sea via narrow waterways accessible only by kayak. The sun glares off the emerging silt. It’s a poetic landscape. And the Crab & Lobster is poised to host hungry amblers for lunch.

Sadly, we can’t stay. I’m out of cash — and still can’t find my wallet.