An Inspector Calls… at The Crescent Turner Hotel in Whitstable

On booking a room by telephone at the Crescent Turner Hotel (so-called because J.M.W Turner loved to paint in the area), I’m told by a friendly man who gives his name as Peter: ‘I’ll call you back in ten minutes hopefully after juggling things about so you can have a room with a sea view.’ He does, and I do.

Room 16 looks out over the oyster fields of Whitstable to the Isle of Sheppey. It’s an impressive sight. The room itself has a silvery hue to it. Pillows are on the hard side and those anti-theft hangers are always dispiriting.

But where the room lets itself down badly is the cramped shower room. There’s not even space for a washbag — or even for tubes of shampoo, shower gel and body lotion, all of which sit in a basket on the white dressing table.

The Inspector gave the Crescent Turner in Whitstable, above, a 2 out of 5 star rating

The basin is so minuscule that it’s impossible to wash one’s face without splashing water on the floor.

The Crescent Turner doesn’t fit that particular mould. It calls itself a boutique hotel but is more like an old-fashioned boarding house, albeit an overtly friendly one. At dinner, I’m convinced that the man at the next door table is a black cab driver from the East End of London taking his wife out for a birthday treat. It’s certainly her birthday, as she’s presented with a complimentary glass of bubbly. 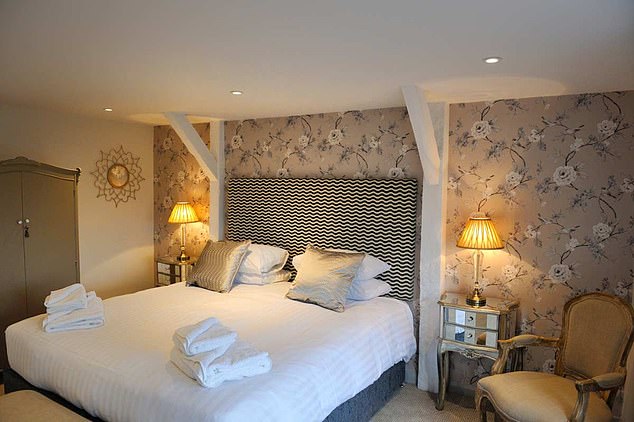 The Inspector’s bedroom looked out over the oyster fields of Whitstable to the Isle of Sheppey. Pictured is one of the bedrooms

I’m sorry there are no oysters on the menu given the town’s reputation for them. Instead I order scallops followed by duck pancakes. ‘Good choice,’ says a woman sitting at the table at the end of the narrow, strangely soulless room, ‘but leave some room for dessert.’

Not a great choice, actually. The scallops taste of nothing much and the mushy duck is unrecognisable from what you get in a decent Chinese restaurant. I should have kept it simple with a burger or fish and chips, the latter at £10.35.

At 8am I have the restaurant to myself for breakfast and can highly recommend the freshly baked croissants. I ask for a double espresso and am told politely that I will get one shot as part of my package but will have to pay for the second shot. Boarding house rules.