An Inspector calls at the Dixon hotel near London’s Tower Bridge, which used to be a police station

Those of a certain age might assume that a former magistrates’ court and police station that’s been converted to a swish new hotel called Dixon was given its name in tribute to Dixon of Dock Green — the TV show starring Jack Warner, as Constable George ‘evening all’ Dixon, that ran from 1955 to 1976. But they would be wrong.

It’s named after the architect John Dixon Butler, who created this Grade II-listed building in 1906 just around the southern corner of Tower Bridge.

There are more than 190 rooms and the hotel is part of the expanding Marriott Autograph Collection.

The Dixon, which is located inside a Grade II-listed building just around the southern corner of London’s Tower Bridge

It’s a spectacular makeover that makes much of its heritage — perhaps a touch too much at times.

The restaurant, once housing 20 cells, is called Provisioners; the chandelier in the lobby, which used to be the main courtroom, features handcuffs; keys to all the cells are embossed in the wallpaper by the lift; and prisoners’ engravings have been cast in metal and attached to walls.

The bar occupies Courtroom 2, with the magistrates’ canopy still in place, under which the barman mixes his cocktails. Surely many a magistrate would have loved to have had a few whiskies during a dull hearing.

I ask for a room with a bath and a window that opens, but to no avail, because on the first count (pun intended), ‘we are completely full’, and on the second, none of the windows open.

I find the ‘completely full’ defence hard to believe, m’lud, when only two couples are in the bar. 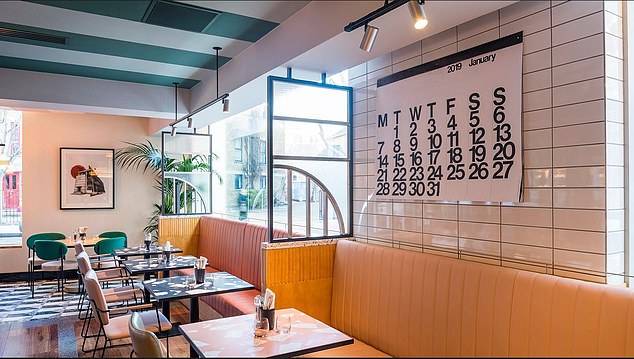 The hotel’s Provisioner’s restaurant, pictured, is located in a part of the building where there used to be 20 cells

But I like my room, with its parquet flooring, distressed mirrors, yellow leather headboard and marble bathroom with press-button shower (although I could do without the ‘hang the towel, not the planet’ flyer).

Provisioners is over-lit. It’s a big space and I fear a canteen spirit. But it turns out to be terrific.

My main course is called ‘Duck, duck & duck’ and comprises breast, leg, spring onions and duck liver parfait on a bed of cabbage with some berries bolstering a delicious jus. It’s a complete triumph.

So, too, is breakfast, where light floods in to the cheerful room. There’s a huge buffet and much is made of the hotel roasting its own coffee beans.

All rise! The verdict is that Dixon’s has a lot going for it and should stay out of financial trouble in a part of town where vast numbers of tourists abound.