There’s a section of the menu in Hotel Football’s restaurant with the heading, Local Legends.

It starts with a Scholesy (match day classic steak suet, chips and gravy), followed by a Giggsy (Cumberland sausage, mash and onion gravy), then a Nicky Butty (classic club panini) and finally a dish called The Pundit, which is Gary Neville’s roast cod, chorizo and red pepper broth.

You get the idea. This is the former Manchester United players’ nice little earner of a hotel that opened a couple of years ago next to Old Trafford and it’s not half as bad as it sounds.

Prime spot: The Hotel Football in Manchester is located right next to Old Trafford

I’m upgraded to a corner room with two windows, one of which gives me a view of Sir Matt Busby’s statue and the huge neon sign reading Manchester United on Old Trafford, otherwise known as the ‘Theatre of Dreams’.

The chirpy staff are keen to please and everyone is super-friendly, perhaps on the assumption we all support the same club, which of course we don’t.

‘I look rubbish,’ says a young woman in the lift as she totters in her high heels. ‘No, you look fine,’ I tell her when really what I mean is: ‘You need a good lie down, love.’

There are TVs everywhere in the 185-seater bar/restaurant area. People are perched at the bar, sitting at tables. And there’s a five-a-side artificial grass pitch on the roof. 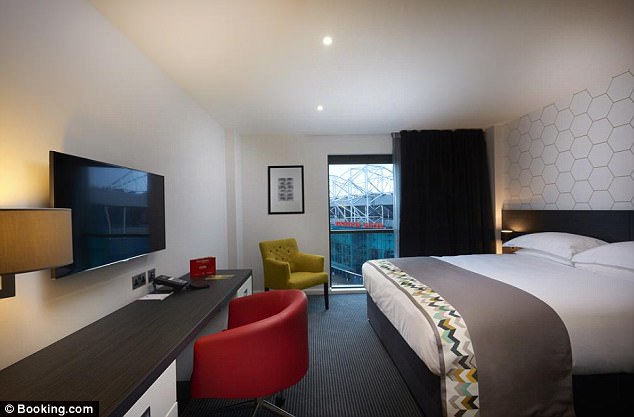 Check in: There are 133 rooms at the hotel, with simple modern interiors. Doubles from £85

Starters are called The Warm Up, side-orders are Throw-Ins. Pictures of footballers and memorabilia line the walls.

There are 133 rooms. Mine is modern and cheerful, with wallpaper behind the bed showing a football hitting the back of the net.

One pillow has Dreaming Of Victory sewn into it; another has Dream Big.

You almost expect Sir Alex Ferguson to pop round and offer some life guidance.

Pulling off a footy theme is not easy, but the boys seem to have done it with a deft touch of humour, a sprinkle of nostalgia and a hefty dose of good, old-fashioned hospitality.