An Inspector Calls: Mimi’s, in the very heart of London’s chic Soho, requires some fancy footwork in the bedroom

We all know it’s absurd to suggest that Germans don’t have a sense of humour.

Even so, I was tickled by my exchange with the receptionist when booking at Mimi’s, a new venture from the German Land Union Group, which has four boutique hotels in Berlin.

After negotiating down from £170 to £153 room only, I asked if she’d include breakfast. ‘I’ll think about it,’ she said. 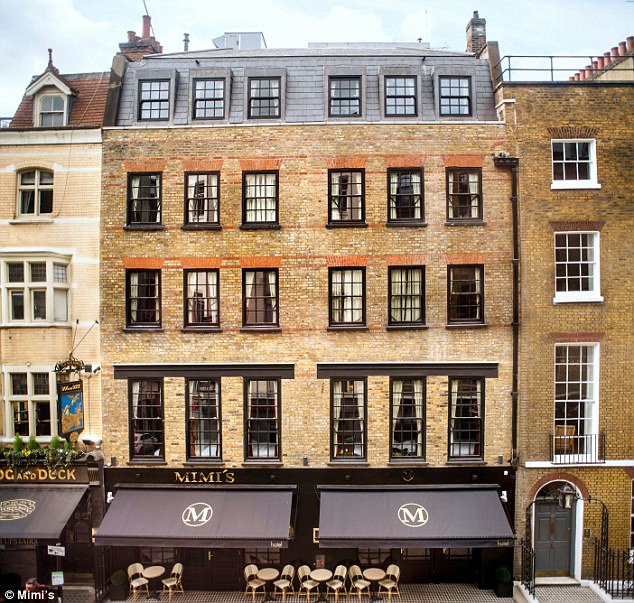 Capital calling: The Daily Mail’s Inspector popped into Mimi’s in the heart of London’s Soho

Cheeky. But then, Mimi’s is a cheeky new addition to Soho – a few doors down from Ronnie Scott’s Jazz Club.

They don’t budge on breakfast, but even so, £153 in this part of town, with a marble bathroom, solid oak headboards, top-notch bed linen, Molton Brown smellies and heated mirrors, is good value.

And when we are told our room is a suite, we think we’ve hit the jackpot.

Turns out that it is not a suite at all, but a tiny double that requires nimble footwork to squeeze around the bed.

Mind you, some rooms are even smaller, with several not even having a window.

There goes that German humour again.

There are no public areas for hotel guests, so you hope to find a seat in the slinky, wood-panelled bar, where Andy Warhol and Matisse prints hang on the walls.

Tight fit: The Inspector found his small room required nimble footwork to get around the bed

There is no restaurant, although you can grab a croque monsieur (£9.50) at night and a croissant (£3) in the morning, along with a fresh orange juice for a whopping £4.50.

A fake fire is blazing, music blaring and the barman is shaking cocktails as we head to Chinatown for dinner.

On our return, the mood is louche. Nightcaps are in order.

Up in the ‘suite’, the window only opens two inches, but that’s enough for us to be woken first by a rubbish truck and then, half an hour later, by a beer barrel delivery.

That’s the Soho way – and perhaps explains why the receptionist gave us a deal.