An Italian escape in tasty Umbria

When I was little, the first thing my mum wanted to know on holiday was: ‘Can you drink the water?’

A few decades later and we’ve just arrived at our villa in the Italian hilltop town of San Gemini.

We spot a note from the owner: ‘Tap water is good for cooking and brushing teeth. As for drinking, we’d suggest mineral water in bottles.’

Historic: Casa del Poggi, originally the stable block of the palazzo, is carved into the town walls

I’m sure this is not because the family fortune that paid for this splendid house (and the 15-room palazzo next door) came from, well, bottled mineral water.

The owner’s great-grandfather began bottling Sangemini water in the late 19th century. It’s one of the best-known brands in Italy, but is no longer in the family.

But we haven’t come to Umbria for the water.

The adults are here for the pretty medieval streets, Roman ruins and a few glasses of Orvieto. George, nine, and Daisy, six, are big on pasta, ice cream and afternoons in the pool.

This is also truffle country. We’ve promised to take the children truffle hunting, which they like the sound of.

Our white-stoned villa, Casa del Poggio (‘house on the hill’), originally the stable block of the palazzo, is carved into the walls of the town. Throw open the front door and you’re slap bang in the main square. 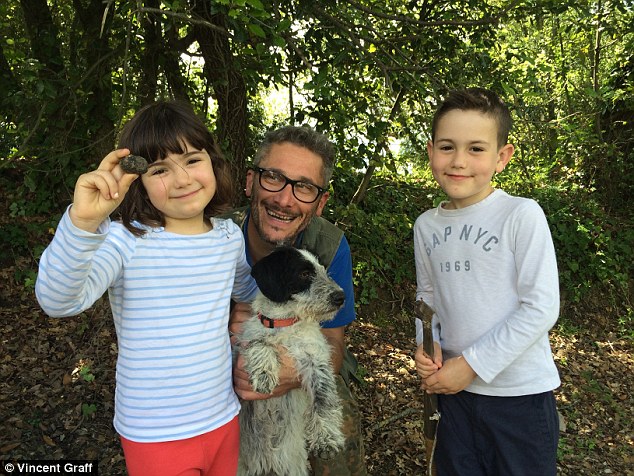 San Gemini is not a tourism hub.

It’s a place where old men in baggy trousers play cards in the cafes, the marketplace is ringed by wild jasmine and Daisy makes such good friends over dinner one night in a 13th century restaurant that she plays in the street with her new pals while we finish off our grilled lamb.

The city of Orvieto, home of the famous wine, is an hour’s drive away. A Gothic cathedral is caked in gold leaf and built in horizontal black and white stripes.

But it’s what’s beneath our feet that we won’t forget. In the Seventies, Orvieto suffered two landslides and stumbled across a forgotten past.

Underneath the streets was a network of 1,200 man-made caves, the oldest dating back 2,500 years. These caves — lit up for visitors on guided tours — have had a succession of uses: quarries, olive-pressing factories, wine and cheese storage.

Their most fascinating chapter was in medieval times, when they housed a network of pigeon farms. Everywhere you look, there are slots drilled into the rock for birds to roost in.

So why pigeons? For their meat. They’re the perfect farm animal — every day they’d fly out of the cave, feed themselves for free in the countryside and return home. 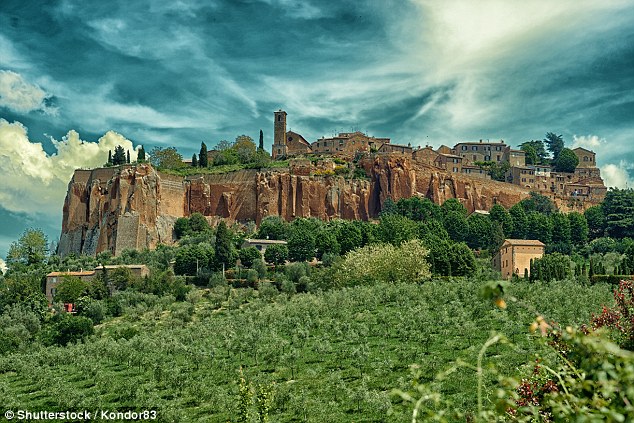 Rocky: The historic city of Orvieto, home of the famous wine, was only an hour’s drive away

Another great place to visit is Spoleto. Think mini Florence without the crowds. The city is built out of white stone.

The duomo (cathedral) dates back to the 12th century and is crafted out of reclaimed Roman rubble. Yet there’s a peace to the place. At 4pm, all you can hear is footsteps, birdsong and the hubbub of conversation.

Imagine that in Florence!

We stop for a ricotta-and-fig ice cream. Cheesy ice cream? It’s much better than it sounds.

And the truffle hunting? In Italy, they use dogs instead of pigs to sniff out the fungi, so we go hunting in a forest up in the hills with an excitable mongrel, Pippo, and truffle hunter Paolo.