An outlier in South African cricket, Sarel Erwee is finally fulfilling his Test dream at Lord’s

An outlier in South African cricket, Sarel Erwee is finally fulfilling his Test dream at Lord’s – the 32-year-old has taken the long road to the top… and now he is the antithesis of Bazball!

By Neil Manthorp For The Daily Mail

For the antithesis of Bazball, perhaps even an antidote, look no further than South Africa’s 32-year-old opener Sarel Erwee who patiently chiselled his way to his team’s top score of 73 from 146 balls at Lord’s on Thursday as the Proteas scrambled their way to lead of 124.

Erwee is not just an outlier in South African cricket, but, in many ways, South African society, which remains uncompromisingly unempathetic towards those who are not ‘strong’ in the face of challenges, or who cannot pretend to be.

Erwee’s determination to make a career in the game that he loved gripped him throughout his 20s during which he struggled to establish himself beyond the second tier of the domestic game.

For seven years he plied his trade for the KwaZulu- Natal Inland province based in Pietermaritzburg, feeder team for the KZN Dolphins franchise in Durban.

Like many run ‘accumulators’ without a dazzling repertoire of strokes or the habit of putting together purple patches of form, his nevertheless steady consistency was respected and quietly admired without ever prompting suggestions of higher honours.

There were a couple of false dawns, notably when he attempted to reinvent himself as T20 player and scored a century in a rare appearance for the Dolphins in 2017. But he was soon back in the lower ranks.

On the verge of quitting and battling with depression as he approached his 30th birthday, Erwee was persuaded by his parents to book a few sessions with a sports psychologist. 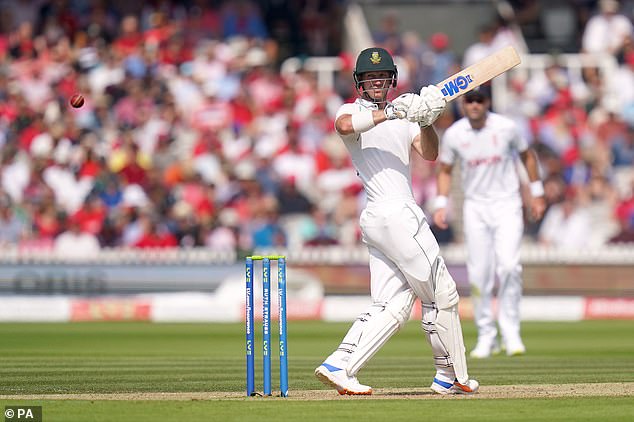 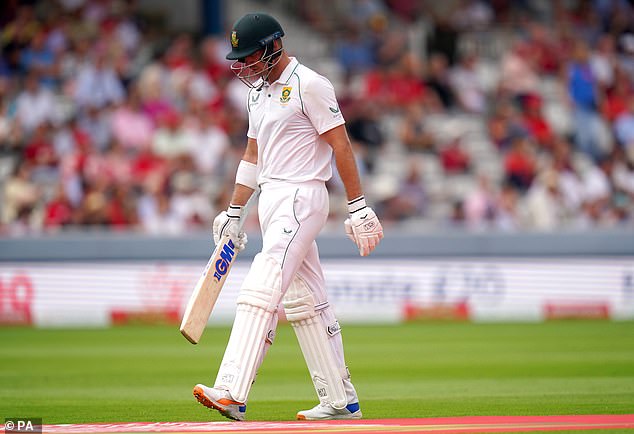 It was the phone call which saved his career and led to an extraordinary rise through the ranks and now, just two years later, a Test match at Lord’s.

‘We don’t focus on it enough in South Africa, not just in cricket, in all sports,’ Erwee said before the tour started. ‘It’s something that is lacking, not just in sports, but in life in general. As a man, it’s kind of laughed at if you show a bit of mental weakness or softness.’

Captain Dean Elgar spoke admiringly of Erwee’s ability to ‘bat time’ when he was first selected and enjoyed the prospect of having a partner with the same grit and determination at the top of the order. Unlike Elgar, the snarling pitbull, Erwee is more reflective and unconfrontational. Which makes them an even better combination. 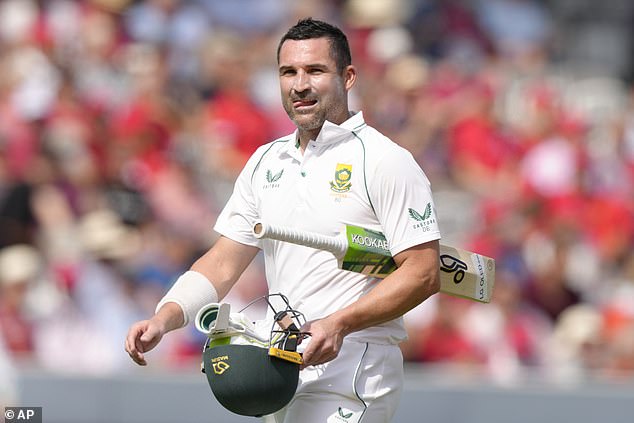 Elgar and coach Mark Boucher have spoken repeatedly about the need for the tourists to play ‘smart’ cricket. Another word for that would be ‘traditional’.

Elgar and Erwee grind the shine off the new ball, do the dirty, often thankless work, and whoever is there at the end of the day can take advantage against tiring bowlers. The old format worked perfectly on Thursday.

Erwee, who prepared for the series playing club cricket for Weybridge, won’t be getting carried away by one good innings. He’s seen far too many of the game’s vicissitudes and life’s ups and downs. Cricket remains extremely important to him but it is no longer everything. 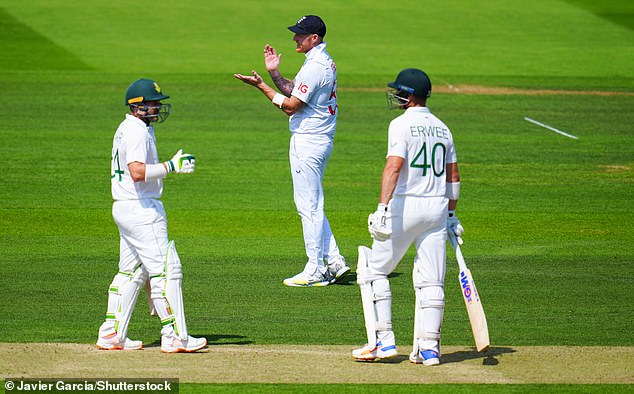 ‘I try to stay in the moment, keep my mind calm. I did look around at times and thought, ‘Wow, I’m playing a Test for my country at the home of cricket’, but then you have to refocus because it’s not about you, it’s about what you can do for your team,’ he said.

Erwee is playing just his sixth Test match but Elgar is playing his 78th during which time a first innings lead of over 100 would have placed the South African team in an invincible position given the strength of their bowling attack and the tendency for home pitches to deteriorate by the fourth and fifth days.

But Bazball’s most important effect is to make the opposition re-evaluate the way they have always read the game. Anything is still possible with this England team.