Anastasia ‘Stassie’ Karanikolaou was proudly flaunting her toned abs as she arrived at her friend Carter Gregory’s birthday bash in LA wearing a show-stopping purple two-piece.

Putting her rock-hard stomach on show beneath a skimpy crop top,  the best friend of Kylie Jenner, 24, teamed the piece with matching trousers and adorned her torso with delicate chains as she arrived for the wild celebration at 40 Love in West Hollywood on Saturday.

Wearing her glossy brown hair swept up into a high ponytail Stassie tied her colourful look together with puffs of purple eyeshadow.

Wow: Anastasia ‘Stassie’ Karanikolaou, 24, made sure to turn heads on Saturday when she arrived at a friend’s birthday bash at 40 Love in West Hollywood on Saturday

Stassie carried her belongings in a tiny metallic handbag toted on her right forearm and also held a red lollipop as she stepped inside.

The social media sensation was rocking a pair of open-toe heels, flashing her immaculate white pedicure.

It comes after Stassie celebrated her 24th birthday with a star-studded bash at Goya Studios in Hollywood which she shared with Zack Bia. 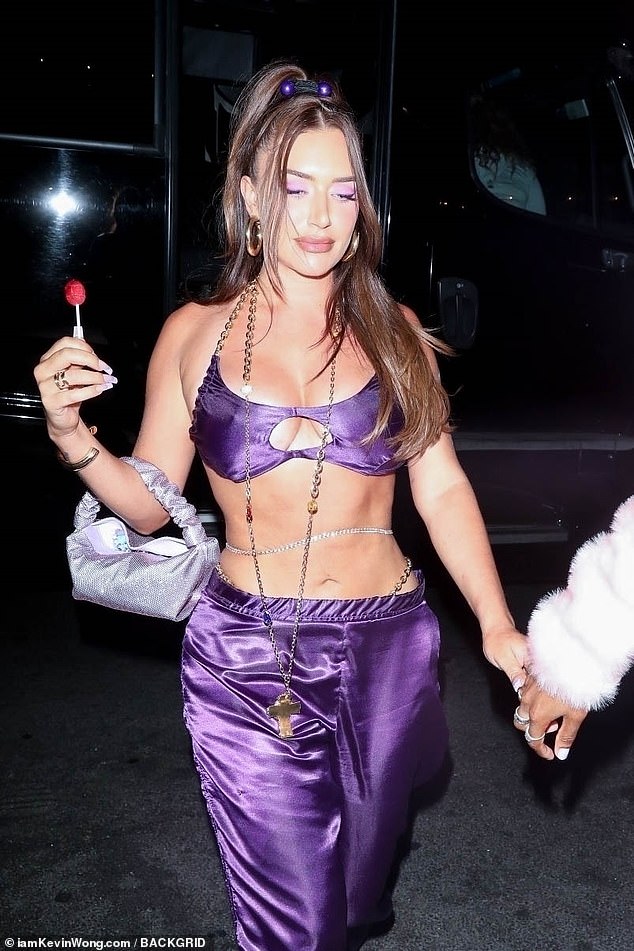 Abs: Putting her rock-hard stomach on show beneath a skimpy silk bra, Stassie teamed the piece with matching trousers and adorned her torso with delicate chains 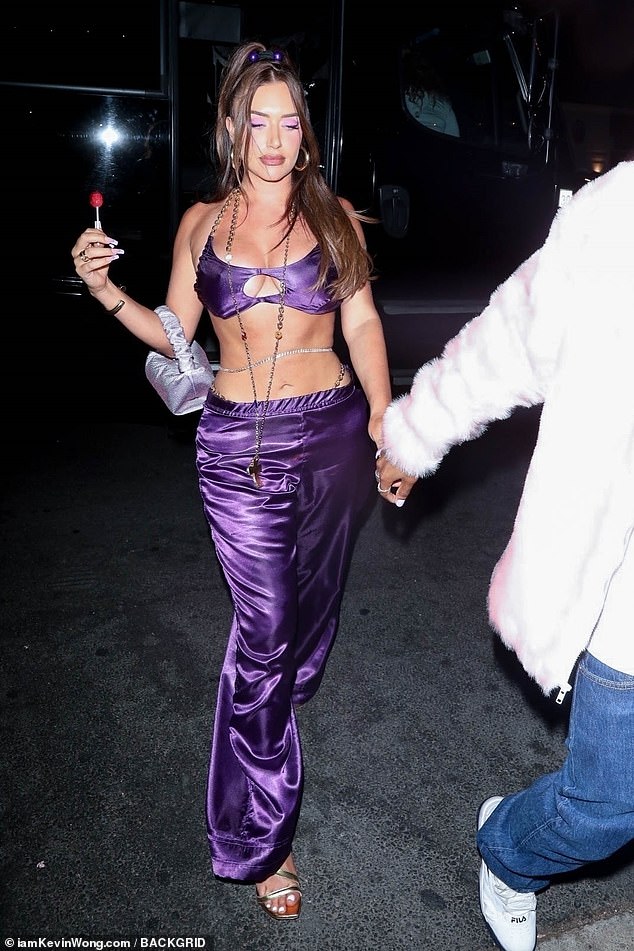 Sugary snack: Stassie carried her belongings in a tiny metallic handbag toted on her right forearm and also held a red lollipop as she stepped inside

Stassie seemed to be the life and soul of the party – which took place earlier in June and was also attended by the likes of Kendall Jenner and Hailey Bieber – as she posed for snaps at the event.

Capturing some of the night’s action, Stassie’s best friend Kylie filmed her from behind on Insta Stories as the birthday girl stood shaking her behind for the camera.

Stassie was dressed to impress for her big night and left little to the imagination in a sheer silver gown, flashing her nude thong and strapless bra beneath the glittering mesh material. 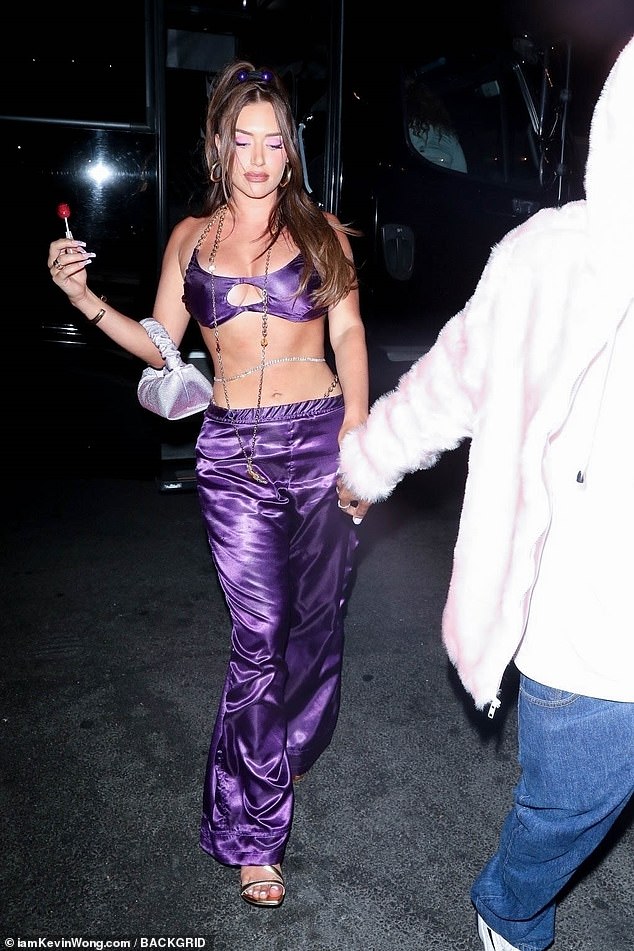 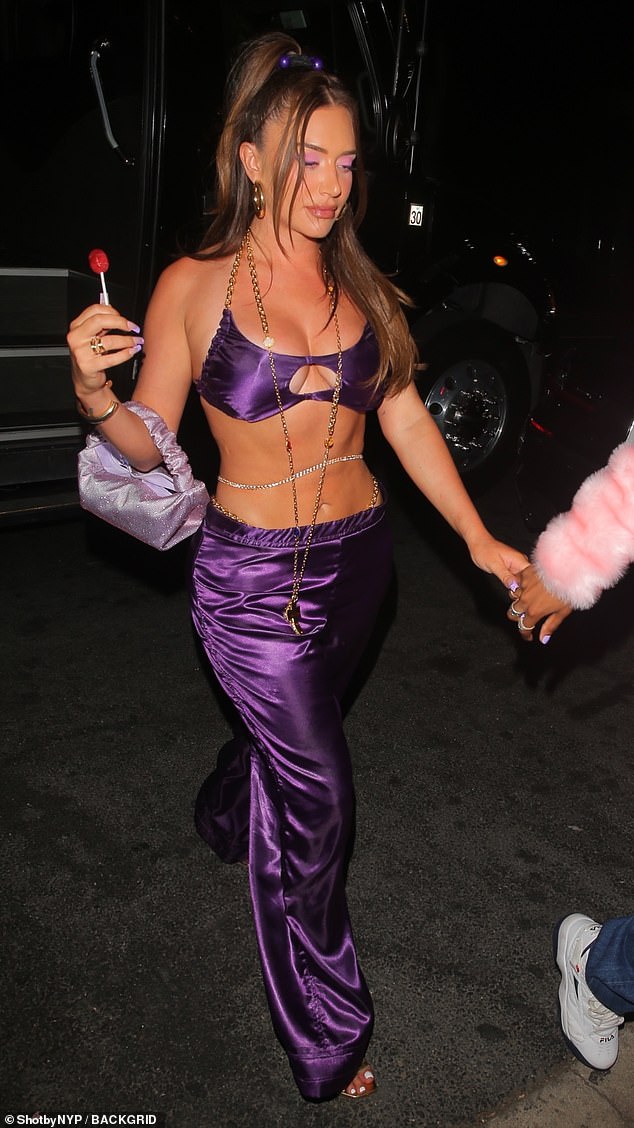 Nails: Stassie was also sporting a fresh set of long acrylic nails when she stepped out in California on Saturday

She added to the glamour with a pair of towering silver heels, and wore her glossy brunette locks in loose waves that framed her pretty features.

Working her every angle, Stassie put her famous curves on full display in the snaps.

The YouTuber has been open about having a few breast augmentations on her channel as she shared her before and after photos with her subscribers, and has fessed up to lip fillers in the past. 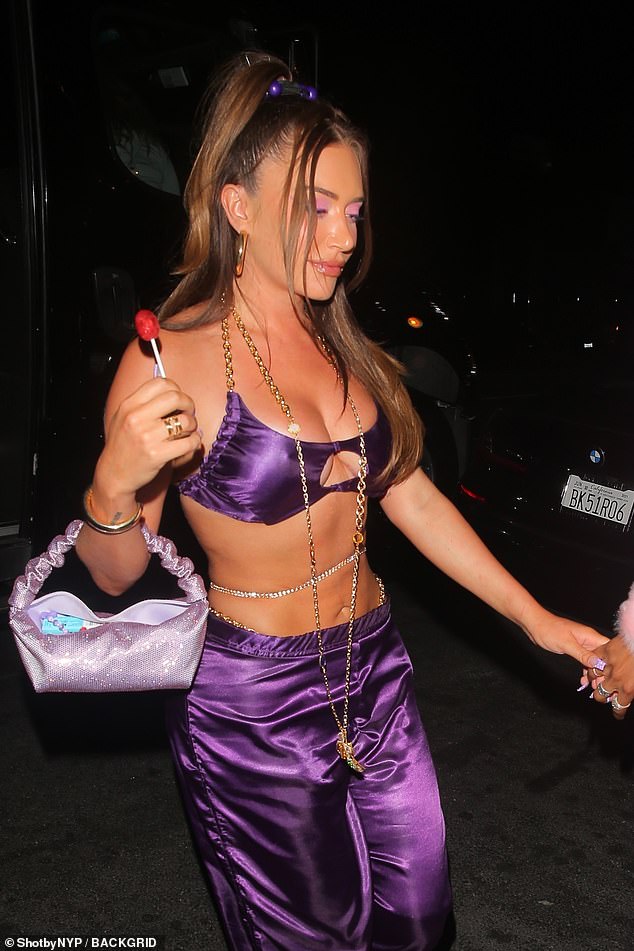 All in the details: The star adorned her ear lobes with a show-stopping pair of chunky gold hoops 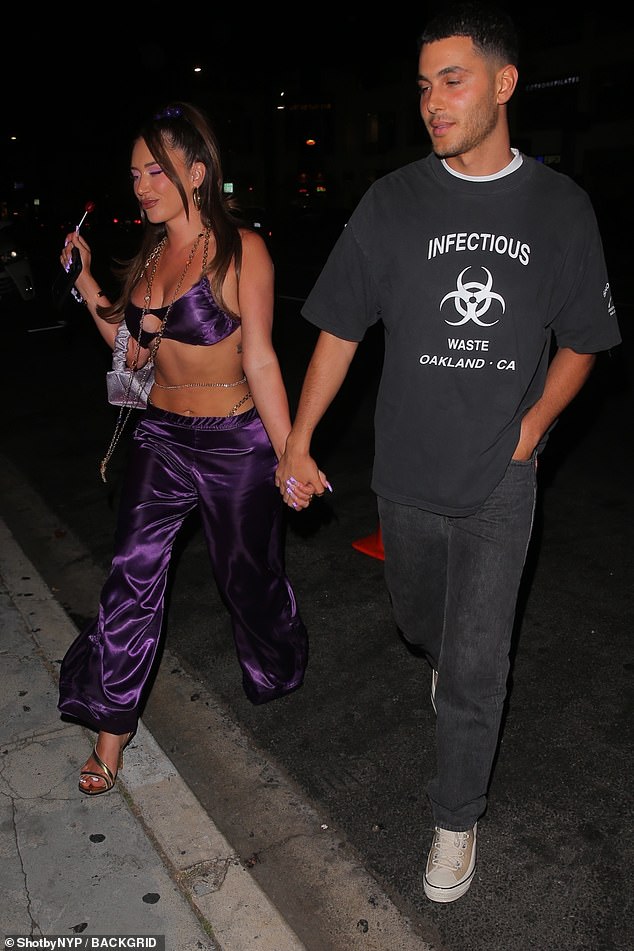 Good friends: Stassie was joined by Kendall Jenner’s best friend Fai Khadra on Saturday, with the pair holding hands as they stepped inside 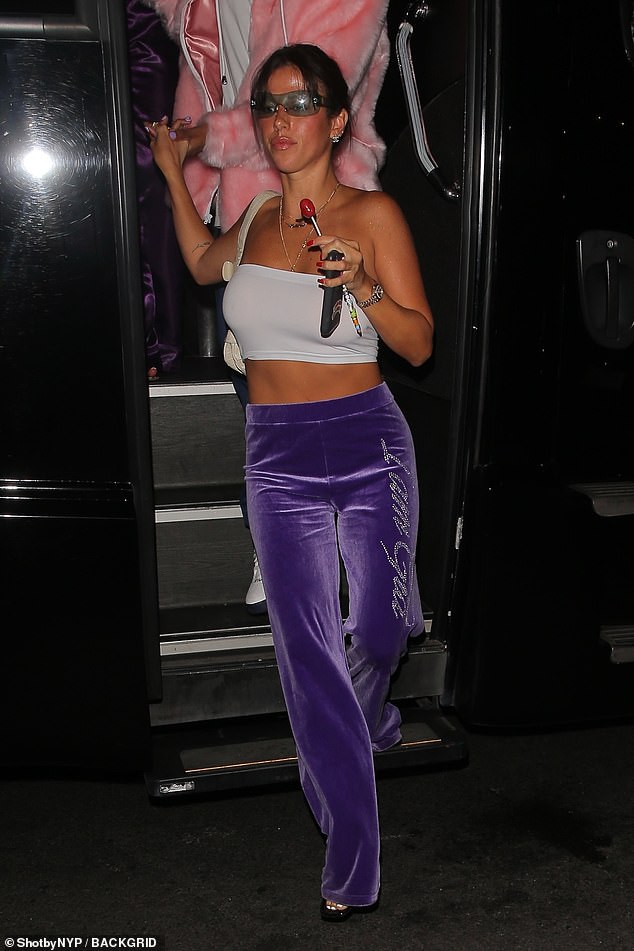 Switch up! Stassie later switched up her look, swapping her silk trousers for a pair of velour tracksuit bottoms and a bandeau top

She cited a disproportionate bust as the initial reason for her first procedure in 2017. ‘My bras and just like everything was difficult,’ she said in her vlog.

‘I [would get] a bra that was too small on one side and fit the other side perfect,’ she shared.

Then in 2018 she made the decision to fix the initial surgery she had after her breasts looked ‘deflated’ after losing weight.

‘When I lost all my weight, [my boobs] just like shrunk…And I just want them to be like cute again. Whatever. Judge me if you wish,’ she said.

The following year she swapped out the implants for smaller ones after she said she had ‘issues’ with the current ones. 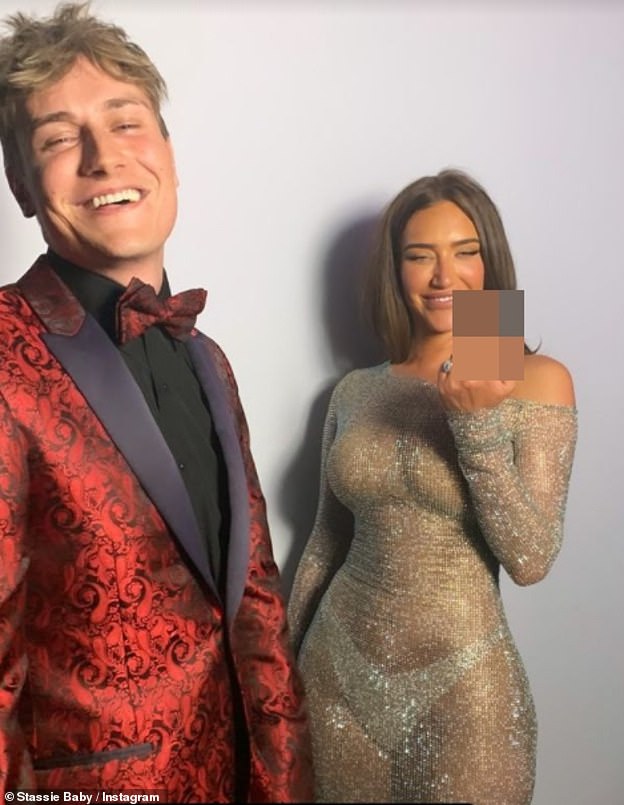 Additionally she and Kylie got lasik eye surgery together which was also filmed for her channel as well as Keeping Up With The Kardashians.

Though childhood friends since they were 10, she became the Kylie Cosmetics’ founder’s ride or die after her fallout with Jordyn Woods after the Tristan Thompson cheating scandal.

And they frequently take to social media to show off their ‘twinning outfits’ — which have become sort of their gag on social media.

In addition to a romance with Noah Centineo (To All The Boys I’ve Loved Before) that began in the fall, Stassie has also been linked to suitors including Too Hot To Handle’s Harry Jowsey and even Bachelorette alum Tyler Cameron. 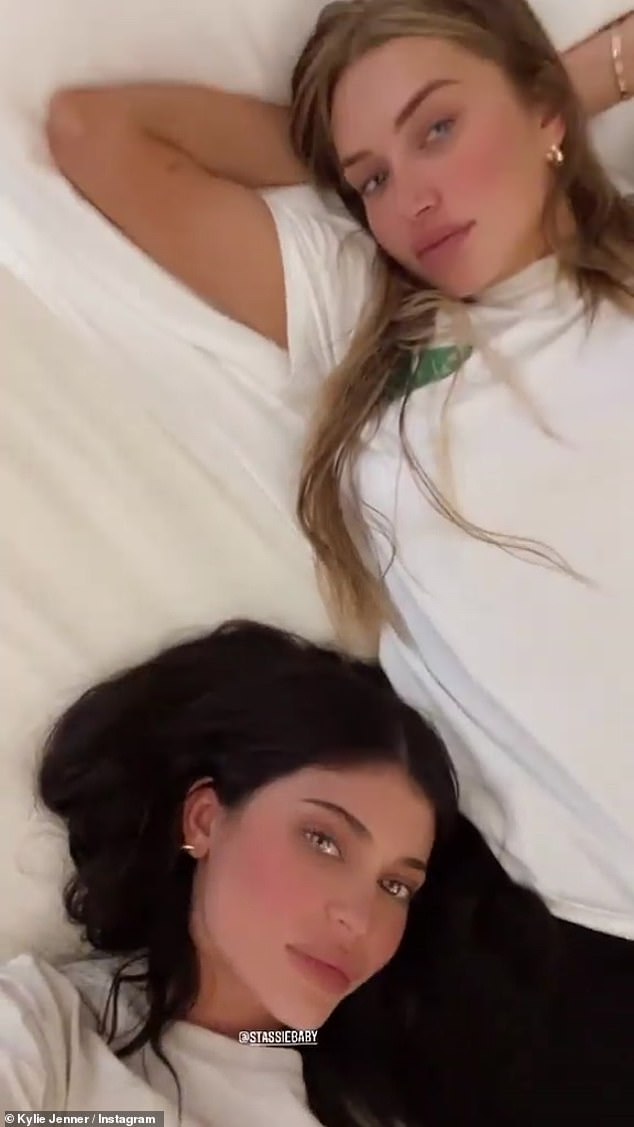 Best friends: Though childhood friends since they were 10, Stassie became Kylie’s ride or die after her fallout with Jordyn Woods after the Tristan Thompson cheating scandal