Man, 70, who ‘snapped’ and strangled his wife of nearly 50 years to death with an extension cord grins moments before being jailed for 16 years

Anastasios Karatzas, 70, was sentenced in Victoria’s Supreme Court on Thursday to a maximum of 16 years in jail

A man who ‘snapped’ and strangled his wife of nearly 50 years with an extension cord then ran away will serve at least 11 years behind bars.

Anastasios Karatzas, 70, was sentenced in Victoria’s Supreme Court on Thursday to a maximum of 16 years in jail for killing his wife Georgia Karatzas at their Mount Waverley home, in Melbourne’s southeast, in November 2017.

He must serve a non-parole period of 11 years.

‘I am not convinced you intended beyond reasonable doubt to murder your wife,’ Justice Christopher Beale said.

Karatzas was found guilty by a jury of murdering his 68-year-old spouse.

Justice Beale accepted Karatzas was remorseful and loved his wife who had been doing laundry when he walked in with the extension cord in his hand to take to their other property. 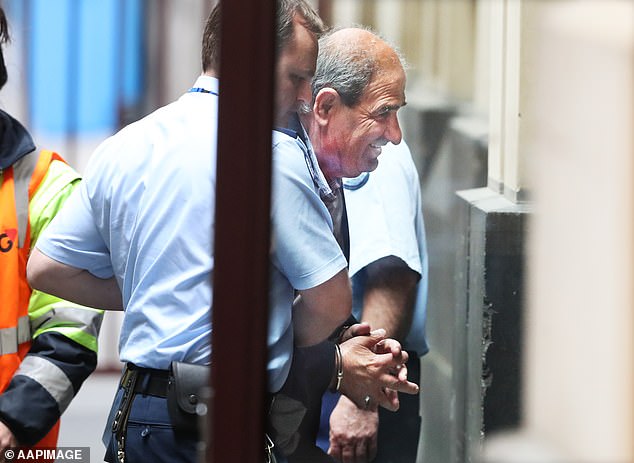 When she asked him why he’d forgotten to take it earlier, he snapped.

‘Tragically … after a disagreement you snapped and strangled her with an electrical extension cord until she collapsed … and you fled the scene,’ Justice Beale said.

Mrs Karatzas’ elderly mother, who lived with the couple, found her daughter dead and facedown in the laundry, dressed in her nightie and with the extension cord protruding from beneath her body.

She died from compression to the neck and also suffered blunt-force trauma to the head.

Karatzas left the family home and was reported missing before being arrested when he turned up at his sister’s house the next day.

‘(There are) no excuses for what I’ve done. I’ve done it,’ prosecutors said he told police.

Karatzas has suffered from depression for about 15 years.

His daughter, Dimitra Karatzas, previously told the court that ‘one tragic moment’ did not define her father who had deeply loved her mother.

‘I love my father more than ever and I have forgiven him for what he has done,’ her statement reads.

‘(And) the punishment you continue to experience knowing you killed your beloved wife and the mother of your children,’ Justice Beale added.

Karatzas will be eligible for parole just before his 80th birthday, having already served 674 days behind bars.