An ancient camp where Neanderthals hosted ‘hunting parties’ to track down large bovids and deer 76,000 years ago has been discovered in Madrid.

Covering a space of 3,200 sq ft (300m2), archaeologists believe it could be the largest such camp in the Iberian Peninsula region.

They think it may have acted as an intermediary between Neanderthals hunting their prey and the place of final consumption, where the whole group would take advantage of the resources that the hunting parties had gathered.

Findings: An ancient camp where Neanderthals hosted ‘hunting parties’ to track down large bovids and deer 76,000 years ago has been found in Madrid. Animal remains (pictured) recovered from the site helped archaeologists identify the camp 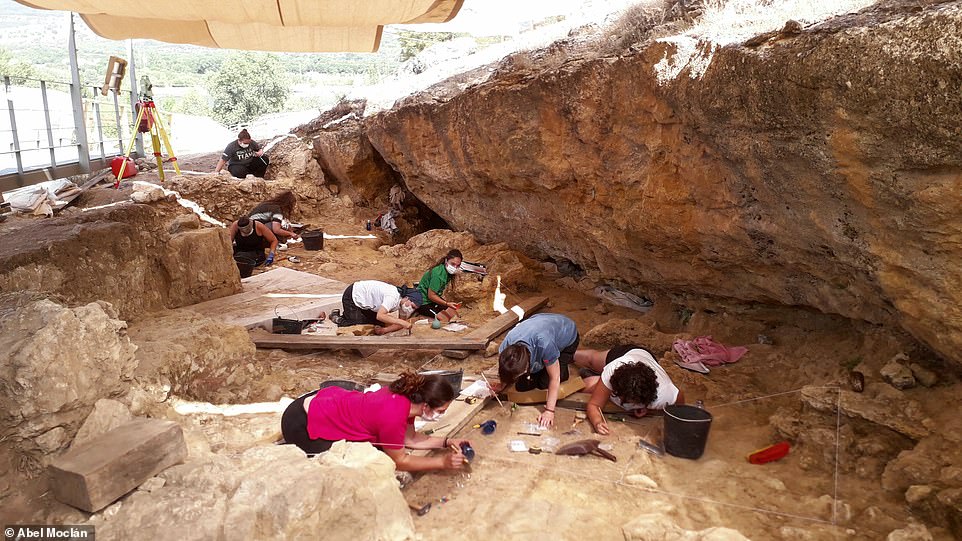 Covering a space of 3,200 sq ft (300m2), archaeologists believe the Abrigo de Navalmaíllo site in Pinilla del Valle, Madrid (pictured) could be the largest such camp in the Iberian Peninsula region 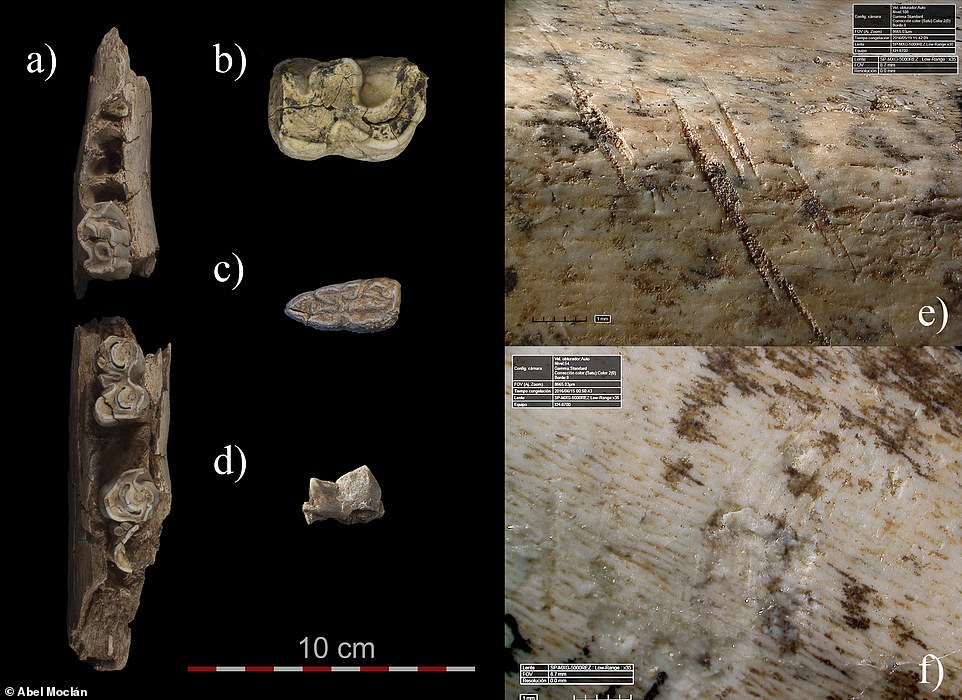 Faunal remains from the Navalmaíllo site include: a) jaw of a large bovid; b) rhinoceros molar; c) horse molar; d) molar hyena; e) stone tool cutting marks, and f) percussion mark to access the medulla of a long bone 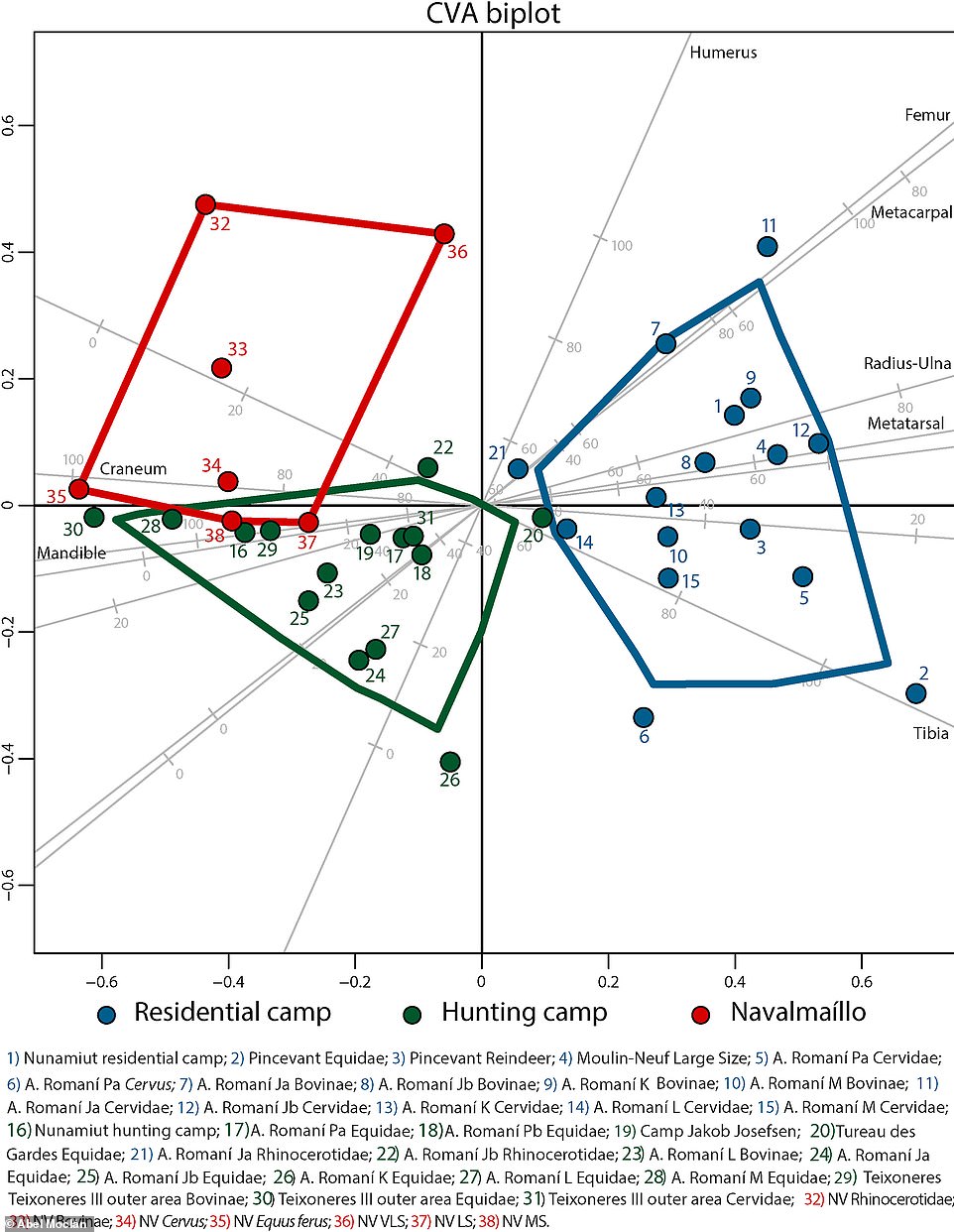 WHAT KILLED OFF THE NEANDERTHALS?

The first Homo sapiens reached Europe around 43,000 years ago, replacing the Neanderthals there approximately 3,000 years later.

There are many theories as to what drove the downfall of the Neanderthals.

Experts have suggested that early humans may have carried tropical diseases with them from Africa that wiped out their ape-like cousins.

Others claim that plummeting temperatures due to climate change wiped out the Neanderthals.

The predominant theory is that early humans killed off the species through competition for food and habitat.

An analysis of fauna at the Abrigo de Navalmaíllo site in Pinilla del Valle, Madrid helped researchers make the discovery. This looks at the entire process of what happens after an organism dies and eventually becomes a fossil.

‘We have been able to demonstrate with great certainty that the Neanderthals of Navalmaíllo hunted mainly large bovids and deer that they processed at the site and that they would later move to a second referential place,’ said Abel Moclán, the study’s lead author and a researcher at the National Center for Research on Human Evolution.

‘This aspect is very interesting, since there are very few deposits in the Iberian Peninsula where this type of behaviour has been identified.

‘For all this we have used very powerful statistical tools, such as Artificial Intelligence.’

Archaeologists have previously found evidence of other Neanderthal activity in the region, including the making of stone tools or the use of fire.

With this latest discovery, researchers think it was used as a short-term base by Neanderthal groups.

Animals were captured locally, transported to the camp, and following their processing, parts of them would have been transported elsewhere.

All phases of butchery were identified, along with the extraction of marrow from long bones, revealing an interest in obtaining this nutritious food.

Human use of animal resources at the site reflects a focus on hunting large bovids and cervids, or deer, while horses, rhinoceroses and small-sized animals was much less frequent, the researchers said.

The activity of carnivores was also identified, but these animals, including hyenas, mostly left behind the remains of small prey or fed upon carcasses abandoned at the camp by human hunters.

‘Navalmaíllo is one of the few archaeological sites in Iberia that can be interpreted as a hunting camp,’ the study’s authors said, but added that ‘it is probable that more hunting camps are present in the Iberian Peninsula but are yet to be found.’ 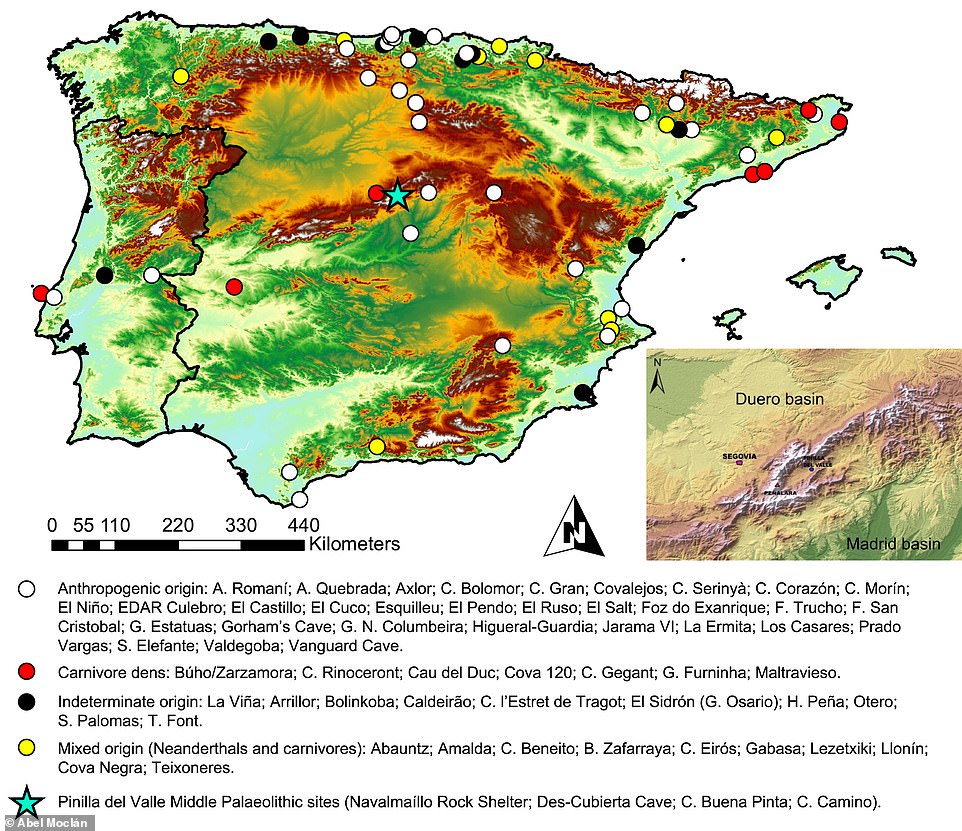 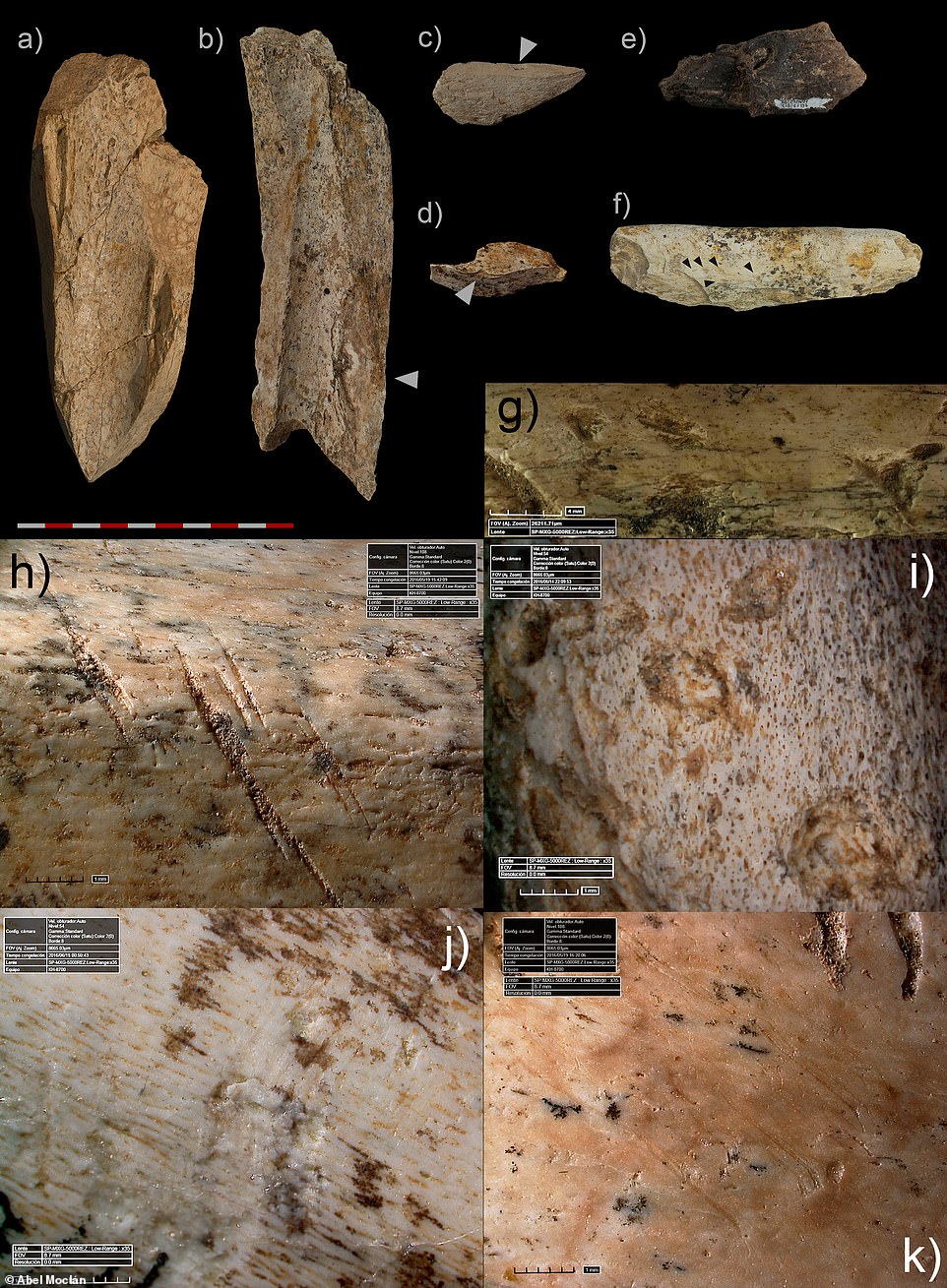 Tooth marks, fractures, cut marks and trampling marks were all found on fossilised bones recovered from the site in Madrid 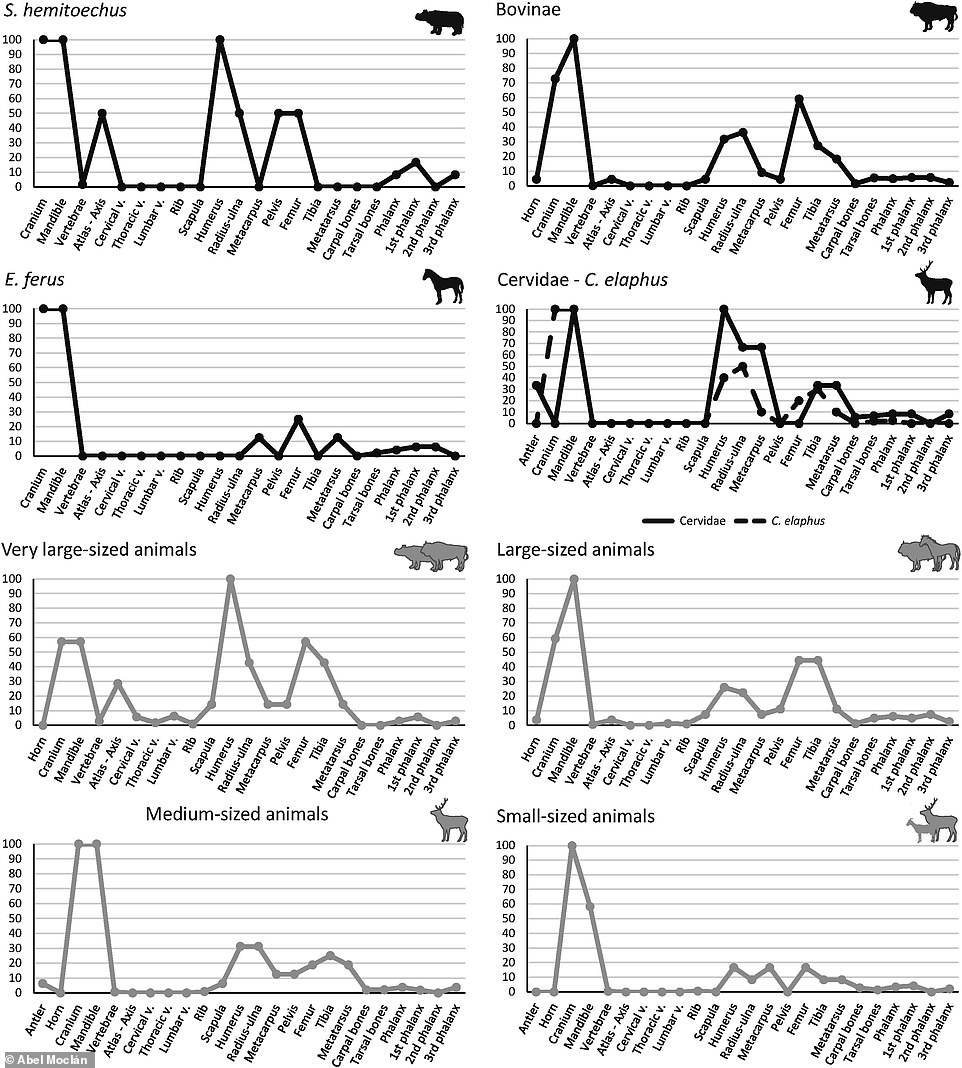 These graphs show the types of very large, large, medium and small-sized animals found at the site. Human use of animal resources at the site reflects a focus on primary access to large bovids and cervids. Access to horses, rhinoceroses and small sized animals was much less frequent, the researchers said 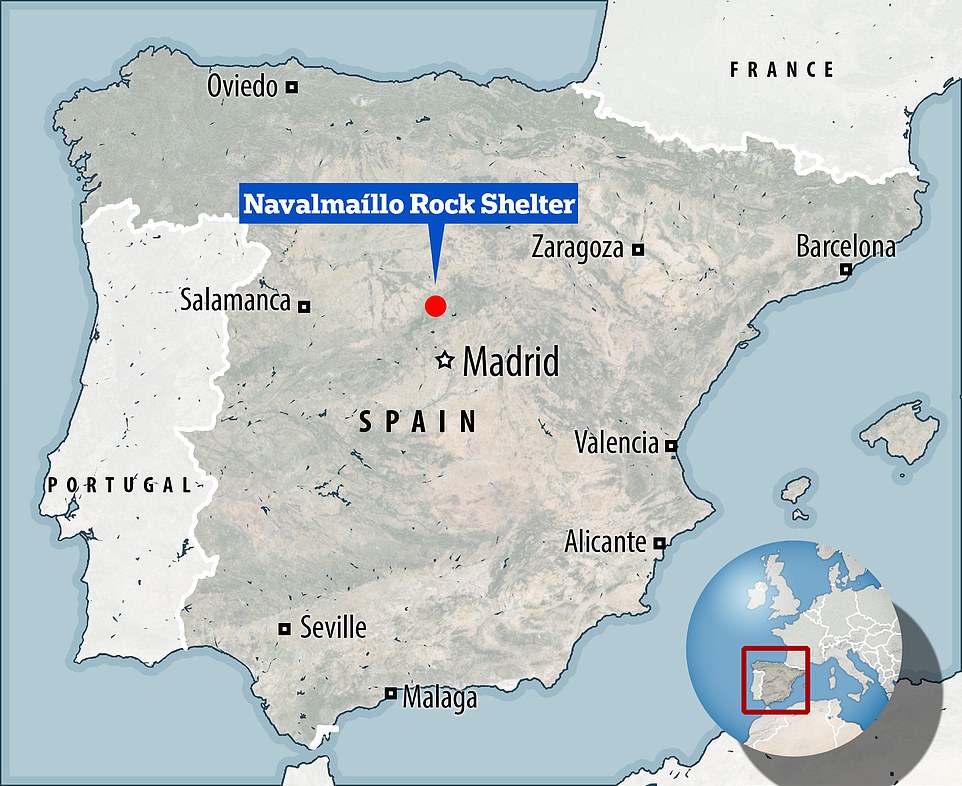 ‘Navalmaíllo is one of the few archaeological sites in Iberia that can be interpreted as a hunting camp,’ the study’s authors said, but added that ‘it is probable that more hunting camps are present in the Iberian Peninsula but are yet to be found’

A flowstone formation at the Cueva de Ardales, Málaga in Spain is stained red, originally thought to be a natural coating of iron oxide deposited by flowing water.

However, samples of the red residue allowed a team from the Barcelona University to re-examine its origins and confirm it was created by Neanderthals 65,000 years ago.

They found the ochre-based pigment was intentionally applied by Neanderthals, as modern humans had yet to make their appearance on the European continent.