While it’s long been assumed early hominins and their culture originated in East Africa, the discovery suggests their dispersal was actually far more widespread, with human ancestors ‘roaming across the Sahara’ around the same time.

The team discovered archaeological materials in two levels of a geological formation at a site called Ain Boucherit dating to 2.4 million and 1.9 million years ago (pictured) . Later excavations uncovered a trove of tools and cut-marked bones

The oldest form of stone tools, known as the Oldowan, and the associated fossil bones can be traced as far back as 2.6 million years to Gona, Ethiopia.

In the new study published to the journal Science, researchers now reveal similar tools had already made it to the northern tip of the continent not long after, by 2.4 million years ago.

‘The Ain Boucherit archaeology, which is technologically similar to the Gona Oldowan, shows that our ancestors ventured into all corners of Africa, not just East Africa,’ says Dr. M. Sahnouni, the lead author and director of the Ain Hanech Project.

‘The evidence from Algeria has changed earlier views regarding East Africa being the cradle of humankind.

‘Actually, the entire Africa was the cradle of humankind.’

The team discovered archaeological materials in two levels of a geological formation at a site called Ain Boucherit dating to 2.4 million and 1.9 million years ago. 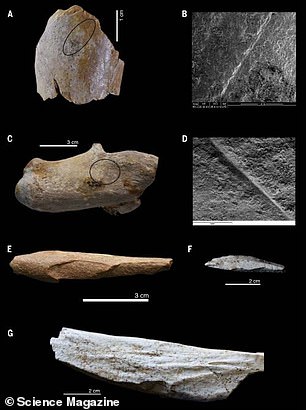 The team found stone tools and animal bones bearing the marks of skinning and defleshing, as seen above

Following the initial discoveries in 2006 and 2008, excavations from 2009-2016 uncovered a trove of tools and cut-marked bones.

The many tools made from locally available limestone and flint, likely sourced from a nearby ancient stream bed, include everything from chopping tools to sharp-edged cutting instruments used for processing animal carcasses.

According to the researchers, these artifacts line up with other Oldowan discoveries seen throughout East Africa, though with subtle variations.

And, many of these show the marks of ‘skinning, evisceration, and defleshing activities,’ the team says.

‘The effective use of sharp-edged knife-like cutting stone tools at Ain boucherit suggests that our ancestors were not mere scavengers,’ Dr. Isabel Caceres, the project taphonomist. 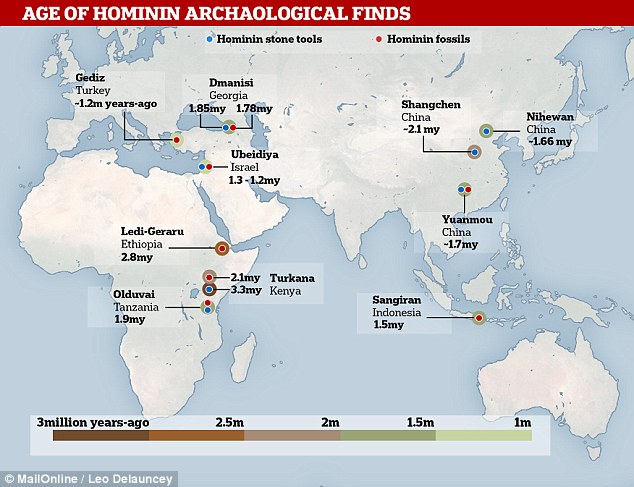 Sites of ancient hominin presence have been found across the globe, beginning in Africa around 2.8 million years ago. These have included stone tools (blue) and fossils (red). The oldest form of stone tools can be traced as far back to Ethiopia 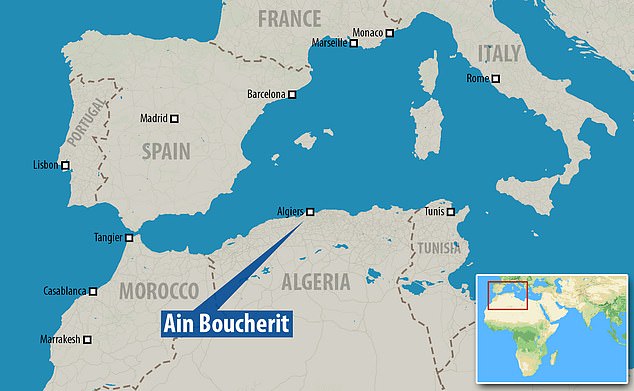 Researchers have discovered artifacts and animal bones bearing the cut marks of stone tools at sites in Algeria dating 1.9 million and 2.4 million years old. This means human ancestors were in the Northern tip of the continent much earlier than previously thought

‘Not clear at this time whether or not they hunted, but the evidence clearly showed that they were successfully competing with carnivores for meat and enjoyed first access to animal carcasses,’ Caceres says.

The life of early hominins in North Africa is still largely a mystery, and much of what is known of these ancestral groups is derived from the tools themselves.

A recent discovery in Ethiopia, however, suggests an early group from the genus Homo was around roughly 2.8 million years ago.

The researchers say this same species is likely behind the materials found in both East and North Africa.

WHEN DID HUMANS START USING TOOLS?

It is hard for scientists to say precisely when humans started making tools because the more primitive remains look like a natural object rather than a human artefact.

The oldest-known instruments are the Oldowan stone tools from Ethiopia, which date back about 2.6 million years.

The Acheulean tool technology period – up to 1.76 million years ago – featured large stone hand axes made from flint and quartzite.

Towards the end of this period, the tools became more refined and then followed the so-called Levallois technique, which saw the creation of scrapers, slicers, needled and flattened needles.

About 50,000 years ago more refined and specialised flint tools were made and used by Neanderthals and it is believed it was at this stage tools were constructed out of bone.

As human culture advanced, artefacts such as fish hooks, buttons and bone needles were used.

Cut marks have found on animal bones that have been dated to be 3.4 million years old – around the time that a squat ape-like ancestor called Australopithecus afarensis – known as Lucy – roamed Africa.

‘Obviously, hominins that are contemporary to “Lucy” (dated ~ 3.2 Ma) probably were roaming across the Sahara, and their descendants may have been responsible to leave the archaeological signatures now discovered in Algeria, dated to ~2.4 MA, that are near contemporary with East Africa,’ says co-author Dr. Sileshi Semaw.

While there is a great distance between the two sites, the researchers say it may have been a case of rapid expansion, or even a multiple origin scenario for stone tools.

If so, the team says artifacts as old as those seen in East Africa could one day be found in North Africa, too.

‘Future research will focus on searching hominin fossils in the nearby Miocene and Plio-Pleistocene deposits searching for the tool-makers and even older stone tools,’ Dr. M. Sahnouni says.