Anderson Cooper recently lashed out at a cameraman who ambushed him and accused him of being biased and doing informercials, video shows.

The CNN anchor can be seen in a video first posted to TikTok, yelling at the man who claims that he was getting paid to cover

‘Yo, get the f**k away from me,’ Cooper tells the man, identified only as ‘JQPublic,’ who continues to follow him through the CNN headquarters.

The cameraman repeatedly asks the journalist whether he was paid to promote certain companies while covering a story of electric vertical takeoff and landing vehicle, better known as eVTOLs. 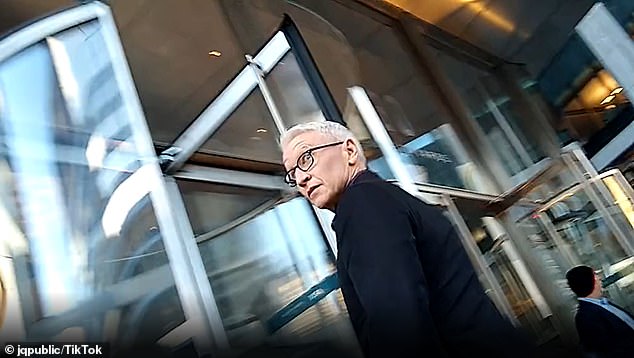 In the video, the man accuses Cooper of doing ‘infomercials’ for eVTOLs, an up and coming form of aircraft that is a cross between a helicopter and an airplane 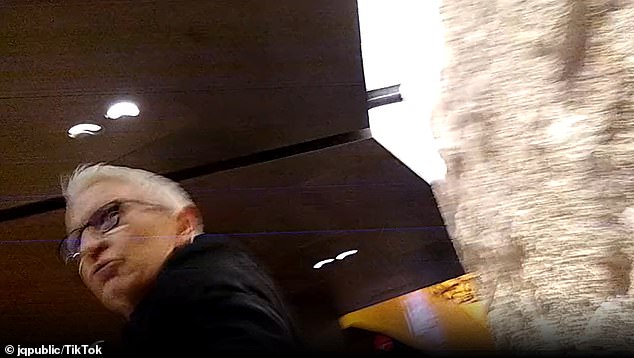 At one point in the video, the cameraman enters a revolving door alongside Cooper, prompting the CNN anchor to respond using profanity

The one-minute video has received just under 20,000 views on the social media app.

‘Anderson, you did a story on eVTOLs for “60 Minutes,” why didn’t you tell the viewers they were infomercials for Joby, Lift, and Wisk,’ the man asks Cooper.

The man is referencing Joby Aviation, Wisk Aero, and Lift Aircraft, companies currently involved in the movement to get eVTOLs up and running.

Cooper did an extensive piece on eVTOLS back in April, interviewing several leaders with companies developing the aircrafts, including Joby and Lift.

‘Did you have investments in Joby, Wisk or Lift?’ the cameraman asks Cooper. 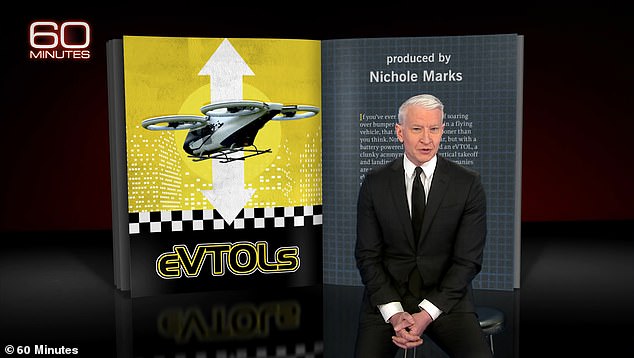 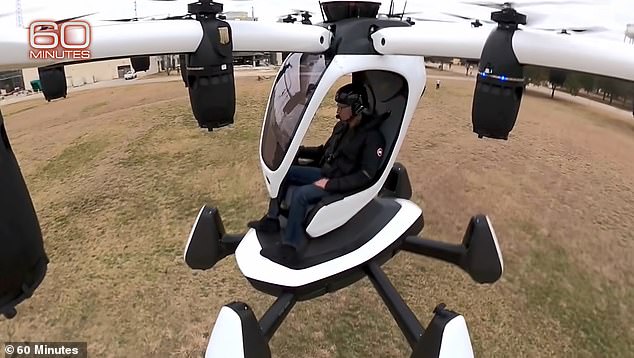 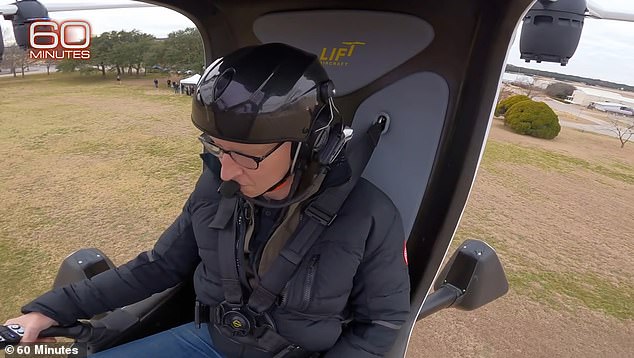 Cooper got the chance to fly a prototype of the  Hexa, an eVTOL made by Lift Aircraft

The man accuses Cooper of promoting the companies without sharing stock information and his own potential biases.

‘You showed Joby on the American Stock Exchange ringing the bell, why didn’t you tell viewers that the stock was down 66 per cent,’ he asks, continuing to record Cooper from just a few steps away.

At one point, the man enters a revolving door in the same small compartment as Cooper, which is when the anchor -who had been ignoring the man- reacted strongly.

Cooper turns back around and continues walking while the man follows. 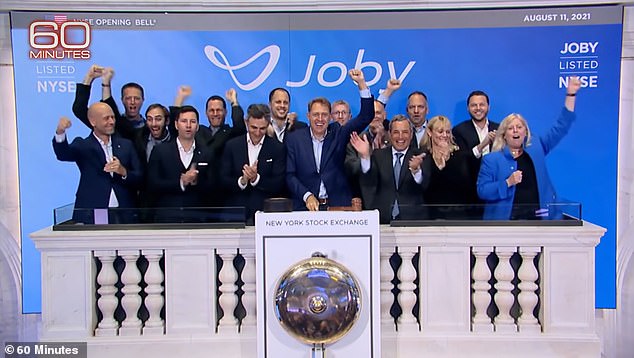 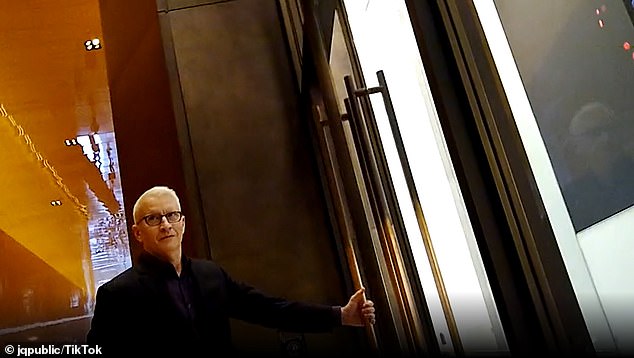 Just before the video cuts off, Cooper turns to the cameraman and chuckles after he insinuates that the CNN anchor did ‘the same thing’ as Kim Kardashian when she promoted a cryptocurrency to her Instagram followers without disclosing that she had been paid

‘Did you know Kim Kardashian was tracked by the SEC for telling stocks, it seems like you were doing the same thing.’

‘Did you have investments in those eVTOLs?’ the man asks.

Cooper responds by turning back, appearing to chuckle, and then walking through a door where the man does not follow.

In early October, Kim Kardashian was fined $1.26million by the SEC for failing to disclose that she was paid $250,000 to promote a cryptocurrency on Instagram.

In June 2021, the ‘Keeping Up With the Kardashians’ star promoted cryptocurrency Ethereum Max on her Instagram story to her more than 300 million followers.

‘Are you guys into crypto? This is not financial advice but sharing what my friends just told me about the Ethereum Max Token! 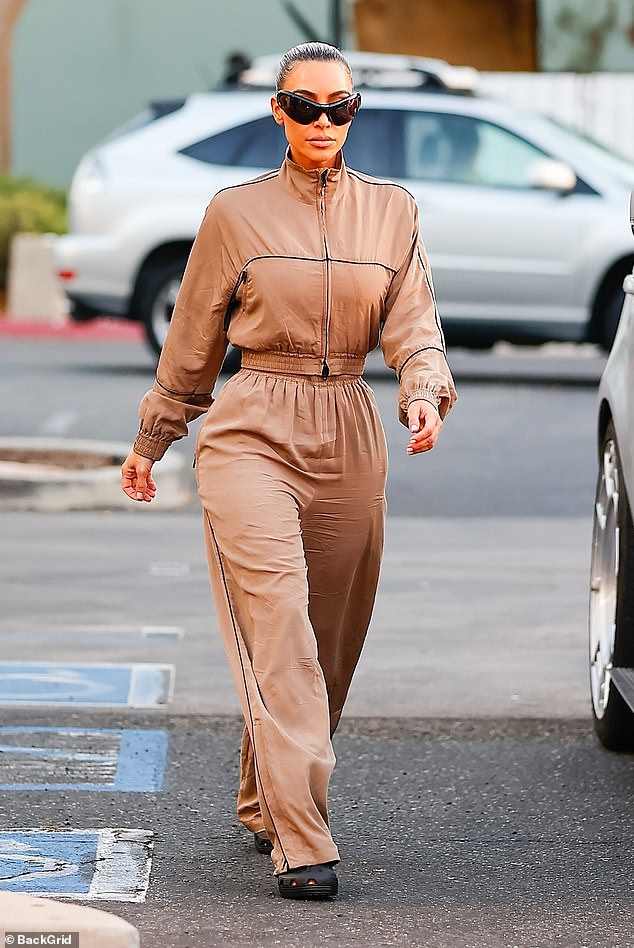 Kim Kardashian (pictured last week) was fined $1.26million for promoting cryptocurrency on Instagram without telling her followers how much she was paid for it last June 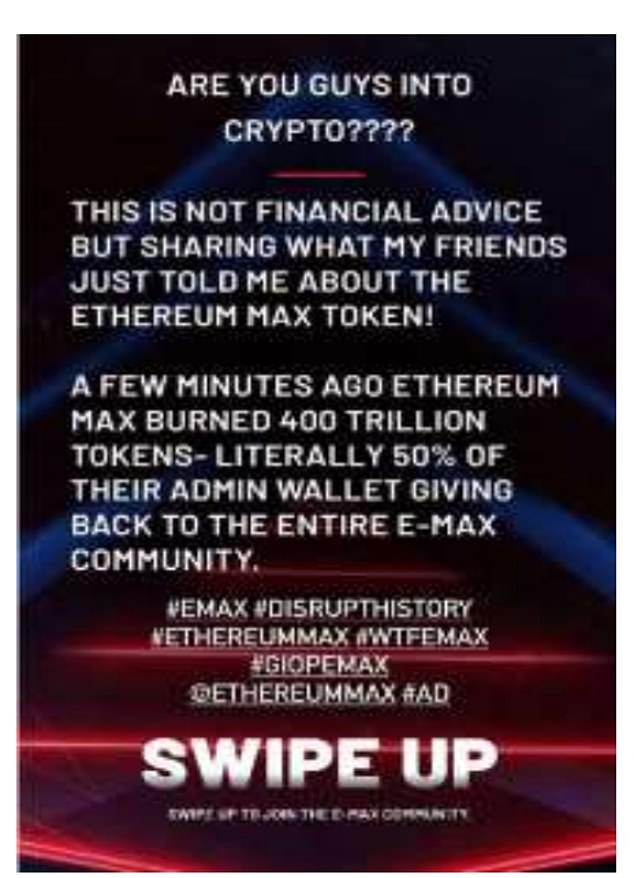 In June 2021, Kardashian promoted the cryptocurrency Ethereum Max on her Instagram story without telling her followers that it had been paid for

The original story on eVTOLs aired on ’60 Minutes’ in April but was re-shared by CBS News in July.

In the piece, Cooper sat down with JoeBen Bevirt, CEO of Joby Aviation, and Matt Chasen, CEO of Lift Aircraft.

The CNN anchor got the opportunity to ride in the eVTOLs produced by each company, as well.

Cooper manned his own flight of the Hexa aircraft model made by Lift Aircraft, first.

‘You can fly 10 miles in 10 minutes instead of spending over an hour on the roads during rush hour congestion,’ Chasen told Cooper.

According to the Lift Aircraft CEO, the vehicles, which look a lot larger-scale drones, would be used primarily for taxi like services.

Cooper traveled to California, as well, to explore Joby’s ‘combination of a helicopter and a plane,’ known as the Joby Aircraft.

‘It can take off like a helicopter but it flies with the efficiency of an airplane,’ Bevirt said.

Cooper did not mention during the interview if he had any possible outside connections, including financial investments, in the companies.

It’s unclear where the cameraman’s insinuations that Cooper may hold stock in these companies came from.

Commenters on JQPublic’s TikTok page have applauded the man’s actions, saying that he was asking the questions no one else would.

‘Did Anderson cooper just cuss at the person asking him questions,’ wrote another.

In addition to the video with Cooper, the TikTok user has posted videos of him accosting other journalists and media personalities in New York City.

In 2017, eight women came out in a Washington Post story claiming that Rose, a longtime CBS reporter, had sexually harassed them.

Stahl, a coworker of Rose, manages to maintain a straight face for a majority of the video as the man continues to follow her New York City streets and question her on camera.

At one point, Stahl glares at the man after he asks ‘did you sexually harass anybody at CBS?’

‘Gayle, do you pay state sales tax on all the free promotional items you get after all these years,’ he asks.

King then pulls out her own phone and appears to start recording the man.

She asks ‘who are you with’ as he then questions her about her own ties to Charlie Rose.

‘What do you want from me,’ King asks as the man is blocked by her bodyguards.

He then accuses King of swaying the vote for a New Jersey beauty pageant in favor of her former assistant, who he claims she helped win.

‘Do you think that was fair,’ he said of King using her Instagram to share the voting information for the pageant.

‘You know what I think is not fair,’ King says, ‘is you accosting me on the streets.’

The cameraman then responds ‘I’m not accosting you.’

Abrams was one the first to report on Moonves’ sexual harassment allegations.

She, alongside David Enrich, wrote about the bombshell 59-page document from CBS that highlighted the extent of the former CBS CEO.

When asked to identify himself by Abrams, he says: ‘I’m a victim.’