‘Being back with Hugh was like putting on an old shoe. It fits perfectly’: As she stars in a new Four Weddings And A Funeral, Andie MacDowell reveals her own dramatic adventures in love – on and off screen

She reduced Hugh Grant to a stuttering wreck in Four Weddings And A Funeral and caused Bill Murray’s irascible weatherman to relive his days on an endless loop until he could win her affections in Groundhog Day. But as Andie MacDowell admits, her own romantic life isn’t quite the Hollywood fairy tale. ‘Unfortunately, I’m not dating at the moment and can’t even figure out how to begin to do that,’ she says.

Now 60, she has been married twice and visibly baulks at the suggestion that she might want to try a dating app. ‘Oh, heavens no!’ she exclaims. ‘It would be impossible for me because there’s so much projection about who I must be because of the job I do. And what I want at my age are great friendships.’

The original Four Weddings And A Funeral saw Hugh Grant’s bumbling Charles finally win over MacDowell’s Carrie. ‘In the sequel Carrie has relaxed more over the years,’ MacDowell says

MacDowell was just six when her father left home. Her mother Pauline subsequently became an alcoholic and the young Andie was forced to grow up quickly. ‘I did an intervention for her when I was 17 but it failed,’ she admits. ‘I wouldn’t say I blamed myself for her disease, as I didn’t have any control over it, but I wish I could have saved her. She died when she was 53 and I was 23.’

MacDowell is best known for her work in light romantic comedies, none more so than Four Weddings And A Funeral – a short sequel to which she has just been filming in London, called One Red Nose Day And A Wedding (to be shown in next year’s Comic Relief on March 15). She says, ‘I wept seeing everyone again. We all had dinner at [writer] Richard Curtis’s house and even his life with his wife Emma is like something out of a movie. Being back with everyone was like putting on an old shoe. It fits perfectly.’

MacDowell took the original job against the wishes of her manager. ‘But it was just the most beautiful script I’d ever read.’ As for Grant, he ‘wasn’t famous at the time, whereas I was – and he’d constantly tease me about it. I remember he was driving this piece of junk car because he couldn’t afford anything else. He’s probably in a Lamborghini by now.’

MacDowell has also been in the UK filming her latest project, the BBC Three comedy Cuckoo, featuring Greg Davies and Helen Baxendale as a couple who find themselves taking in a succession of odd characters. This season’s oddball is MacDowell’s glamorous Ivy Mittelfart, the wife of a billionaire US businessman. She shows up at Ken’s home and ends up staying longer than anticipated when Ivy is suddenly left penniless. ‘Inside, she’s a good person,’ says MacDowell, ‘but she’s like a creature from another planet.’

When I mention Harvey Weinstein, she seems detached from the scandal. ‘I’d see Harvey at parties and I used to joke with him: “Hey Harvey, remember me?”, because after Sex, Lies, And Videotape [Weinstein’s 1989 movie] he didn’t use me again. My life was never in Hollywood. I had no clue what was going on with Harvey. I was shocked and saddened by the stories because he was someone I respected, and hearing all this ruined what was a great experience for me, working on that movie. 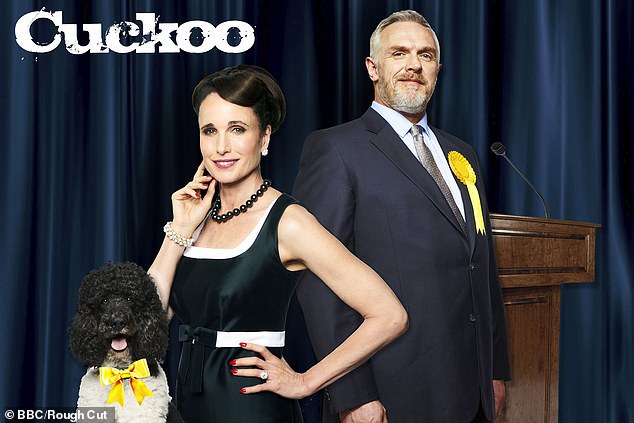 MacDowell has also been in the UK filming her latest project, the BBC Three comedy Cuckoo, featuring Greg Davies and Helen Baxendale

‘I’ve never been the subject of inappropriate behaviour in Hollywood, but outside the business I’ve had men thinking they could touch me inappropriately or treat me as a sex object. Maybe it’s because I’m very antisocial and boring,’ she laughs. ‘I’m a very quiet person.’

Men don’t seem too important for MacDowell now, however, who is so busy working ‘that I wouldn’t know how to invite anything else into my life’. She laughs. ‘I guess I don’t want a relationship bad enough.’