Andrew Gamez-Heath reveals he is HIV positive via Facebook

A courageous man outed himself as HIV positive in a public post on Facebook in a bid to show having the virus is not a death sentence.

After taking a test as a precaution at the start of a new relationship, Andrew Gamez-Heath was shocked to be told he had the virus just 60 seconds later.

Many of the 34-year-old’s friends did not even know he was gay – yet his attempt to reduce the stigma surrounding the condition on social media was praised and the post has been shared thousands of times.

Andrew is now is happily married to nurse Ricardo Gamez-Heat, 33 – who has stuck by him despite knowing him for just a few weeks when he received the news.

Diagnosed in November, 2014, while living in Balham, south west London, Andrew’s illness is well-controlled and, thanks to daily medication – which he says he suffers no side effects from – the virus is now undetectable in his body.

Andrew Gamez-Heath (left), pictured with his now husband Ricardo (right) took a test as a precaution at the start of their relationship 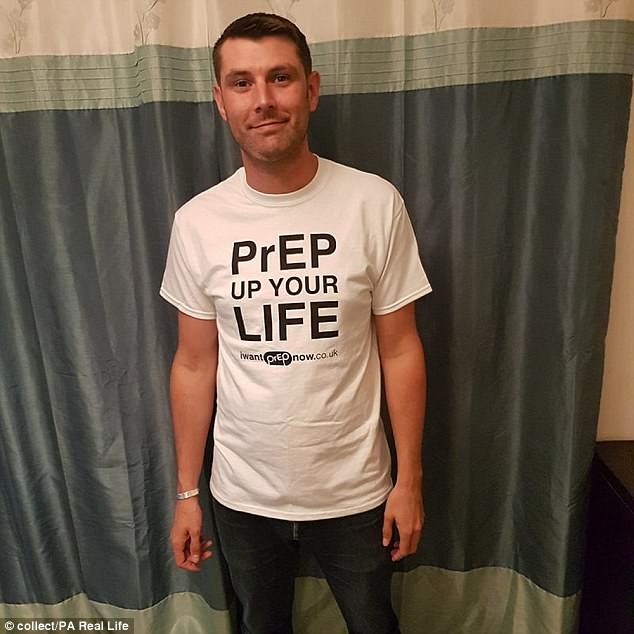 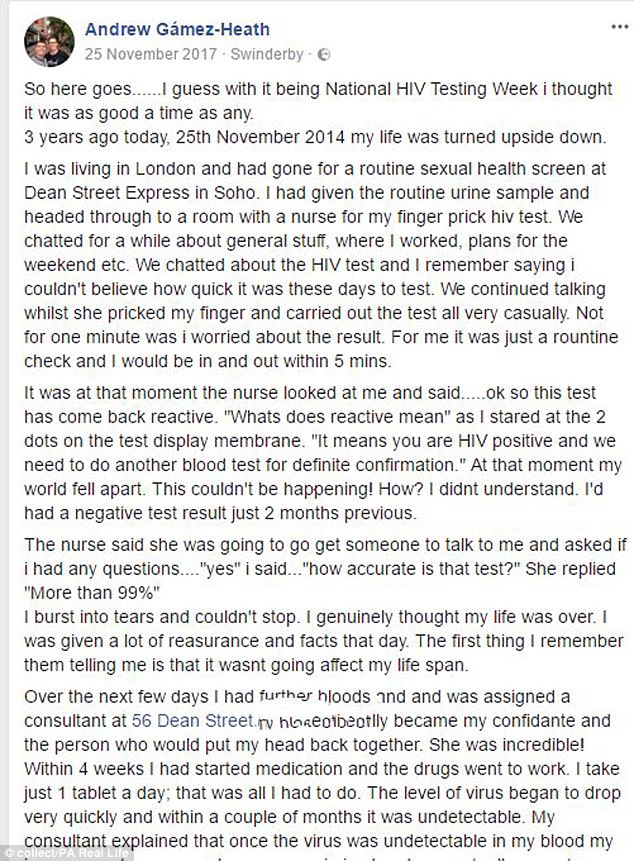 Writing on Facebook six weeks ago, he said: ‘People are living with this virus like it’s shameful. I’m no different from when I didn’t have HIV.

‘In fact, I’m happier and healthier than ever. It’s made me grow as a person and I’m able to do a job that changes perceptions.

‘HIV does not define who I am and never will. No more than me having green curtains in my lounge would define me.

‘But if people don’t talk about being HIV positive and the facts about the virus then the stigma will continue. I’m happy, healthy, my virus is undetectable, and I can’t pass it on. My life is no different from yours.’

‘The bottom fell out of my world’

Just two months earlier, Andrew, from Lincoln, Lincolnshire, who then was working at London’s celebrated Savoy Hotel had a another HIV test had been clear, making the positive result all the more unexpected

He explained: ‘I was living in London and had gone for a routine sexual health screen at Dean Street Express in Soho.

‘I took the test because I’d only just started seeing Ricardo and I wanted to make sure I was healthy. 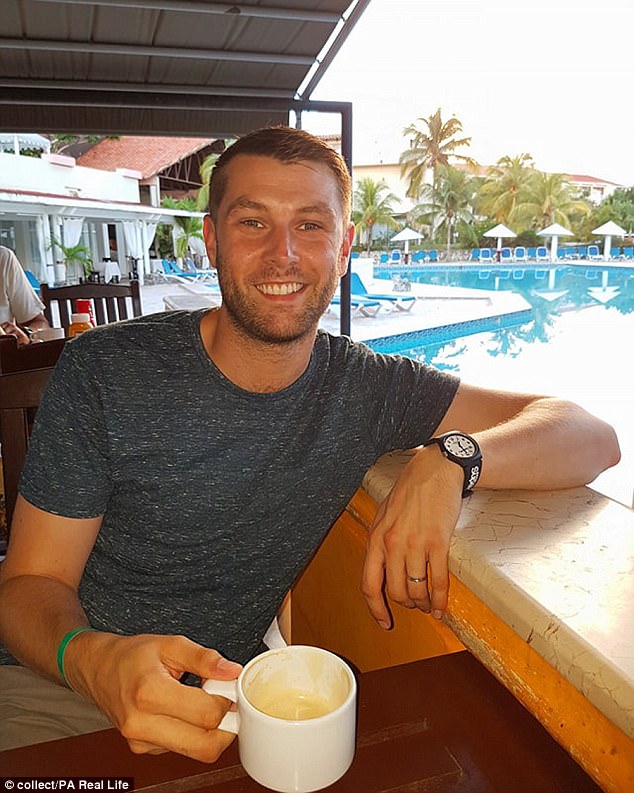 ‘People visit the dentist and I don’t see getting tests for STIs any different to that. I viewed it as the same.’

Andrew, who now works for Positive Health, a sexual health charity in Lincoln which aims to raise awareness of HIV, burst out crying when he found out he was positive.

‘Not for one minute was I worried about the result. For me, it was just a routine check and I would be in and out in five minutes.

‘The nurse told me, “Okay, so this test has come back reactive,” he explained. ‘She went on to say it meant I was HIV positive.

Andrew, originally from Whitby, North Yorkshire, admits ‘the bottom fell out of his world.’

He said: ‘I heard the words, ‘HIV positive’, and I just crumbled. ‘I immediately wanted to know how accurate the test was.

‘When they said it was more than 99 per cent accurate, I knew I had it.’

Despite having only known Ricardo, who he met through friends, for a few weeks, he asked staff to call him.

‘As Ricardo arrived, I was told I could leave Dean Street,’ he explained. ‘I didn’t want to. If I left it would be real.’

‘It was suspected I had a virus’

Over the next few days, he frantically tried to figure out who had given him HIV, but admits he still does not know.

He recalled being off work with severe flu-like symptoms a few weeks before the diagnosis and now thinks this was seroconversion occurring.

According to the Terrence Higgins Trust, this occurs up to six weeks after infection. It’s a sign that their immune system is reacting to the presence of the virus in their body. 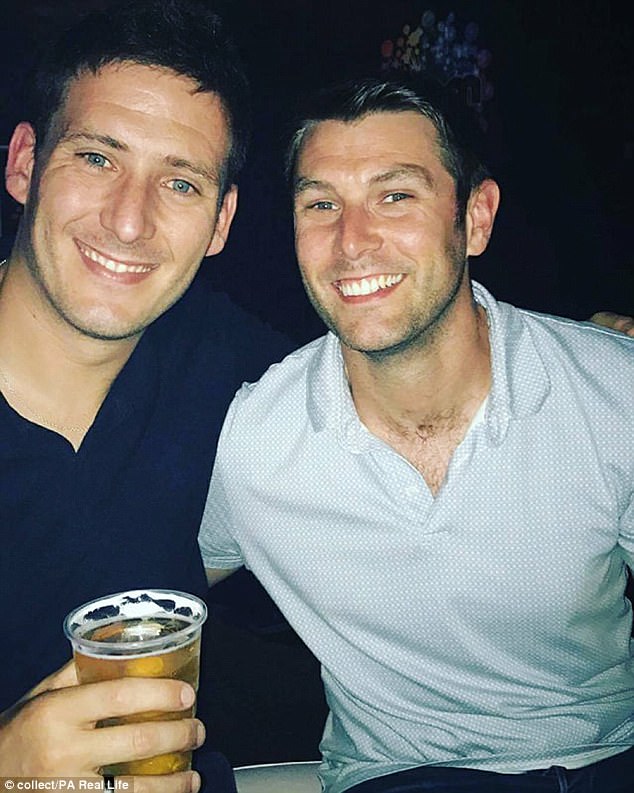 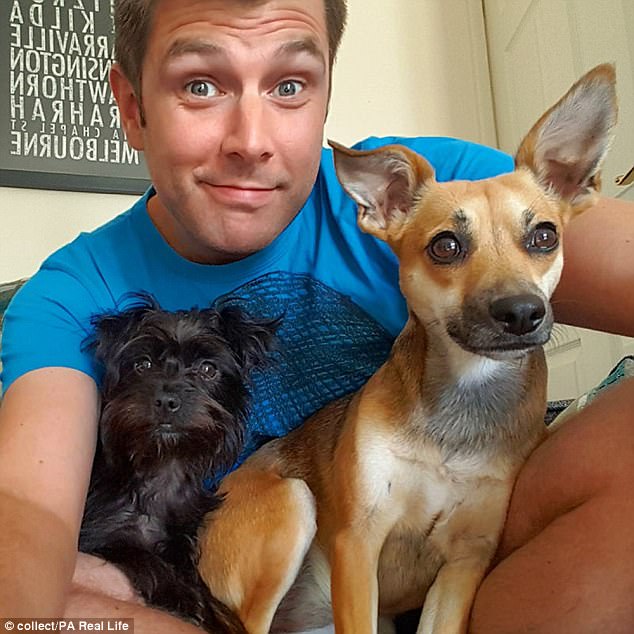 ‘HIV does not define who I am and never will,’ says Andrew who works for sexual health charity Positive Health

Seroconversion is also the point at which the body produces antibodies to HIV. Once this has has happened, an HIV test will detect antibodies and give a positive result.

Seroconversion illness happens to most – but not all – recently infected people. It can be severe enough to put someone in hospital or so mild that it’s mistaken for something like flu – although a blocked or runny nose is not usually a symptom.

‘At the time, I felt awful,’ he explained. ‘I actually went to the GP and was referred for blood tests, but they showed nothing, so it was suspected I had a virus.

‘The illness cleared and I got on with things.’

In the days after his positive test, Andrew was referred to another NHS clinic, 56 Dean Street, for blood tests, to discuss medication options and to be referred for counselling. 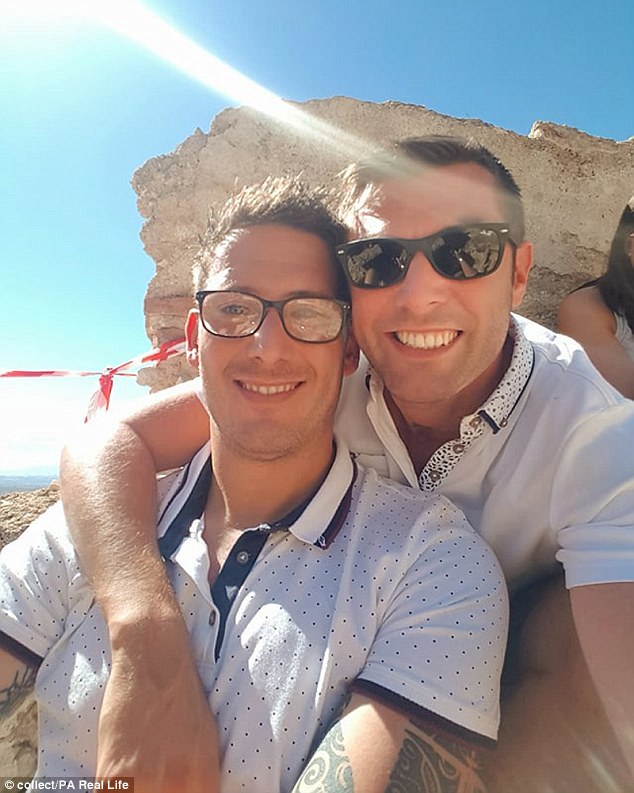 Tests showed his viral count was very high, meaning the illness had been very caught early.

‘Then, I met a counsellor and they said, “Do you know anyone with HIV?”

‘It made me realise that people could survive.’

Within four weeks he had started medication and the drugs began to work.

‘I had to take just one tablet a day, that was all I had to do,’ he explained. ‘The level of virus began to drop very quickly and within a couple of months it was undetectable.

‘My consultant explained that once the virus was undetectable in my blood, my immune system was no longer compromised and was actually very strong anyway. Not only that, it meant I couldn’t pass the virus on to anyone. I was and still am un-infectious.’

‘I don’t know what I would have done without him’

Still Andrew decided not to tell many people – keeping his diagnosis from his mother, Ali Thomson, now 61, and father, Les Heath, now 74.

It was not until around 18 months later that he broke the news to his shocked mum.

‘Initially, she was terrified, as she had only heard terrible things,’ he said. ‘But I was, by that point, very well educated and told her it wouldn’t affect my life span, if I continued to take medication as I was doing.’

Les, who lives on a barge in Leicestershire, was relaxed about it, when he found out just a few months ago. 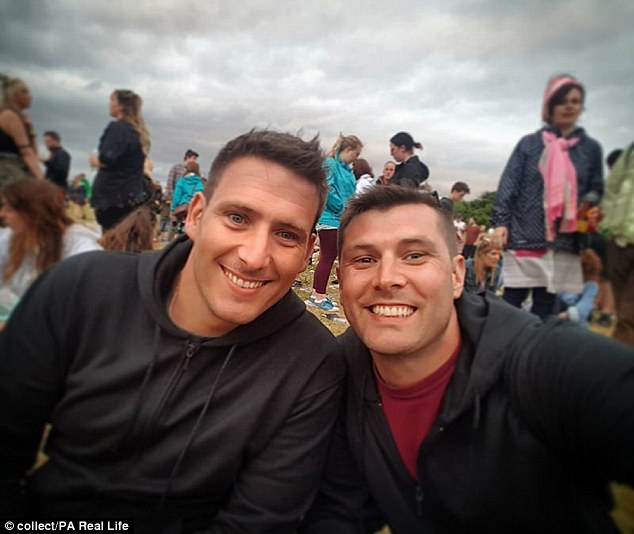 A WEEKLY HIV PILL MAY BE ON THE WAY

A new weekly HIV treatment was shown to work in animals in a new study – prompting its manufacturer to begin development of a pill for humans.

HIV medications can now keep levels of the virus so low in people with the disease that they are undetectable and cannot be transmitted.

But most current HIV treatments require a daily pill or regular injections.

Massachusetts-based drug manufacturer Lyndra’s most recent test of its treatment found that effective, oral doses of three HIV-fighting compounds could stay in the systems of animals for sustained periods of time, as proof of concept for the drug they are developing.

But, even as life spans continue to stretch for HIV positive people, the disease remains incurable, requiring a lifetime of treatment.

The development of a single pill that combines the three key drug compounds used that combat the virus has been a big development.

‘He knew about HIV through my job,’ said Andrew. ‘This meant he understood it was no longer a death sentence.’

Andrew, who married Ricardo in September 2016 at a hotel in Robin Hood’s Bay, North Yorkshire, finally took the brave decision to go public on Facebook, hoping to dispel all the misinformation surrounding HIV.

He said: ‘Through all of this, my boyfriend, now husband, gave me more support than anyone and to this day I don’t know what I would have done without him.

‘But, one thing that struck me when I was diagnosed was that I knew nothing about HIV, and the stuff I did know was so outdated that it was actually wrong.

‘For me, it was so important that I get the correct info out there and try and set the record straight for everyone living with the virus.’

According to Andrew, the most difficult thing about living with HIV has remained the stigma surrounding it.

He said: ‘Here I am doing this job and trying to change perceptions and yet I was keeping my own status a secret.

‘So, after three years, I’ve decided to come out of the ‘viral closet’ and talk openly about my diagnosis.