Andrew Lloyd Webber is to become the subject of a musical

The upcoming stage show is based on Andrew Lloyd Webber’s recent collection of memoirs, Unmasked

Andrew Lloyd Webber is set to become the subject of a new musical – which will be performed in one of his own theatres.

The stage show is based on Lloyd Webber’s recent collection of memoirs, Unmasked, and will be adapted by award-winning director and screenwriter Richard Curtis.

Rehearsals for the show will begin next month at The Other Palace theatre in London’s West End, a venue owned by Lloyd Webber.

The workshop performances, which take place from November 27 to December 1, will then be developed into a ‘planned production’ in the US.

The Other Palace described the musical as ‘highly experimental’ and said it was likely ‘no two performances would be the same.’

A theatre spokesperson told the Sunday Times: ‘Unmasked is a not-so-reverential look at his life and career.

‘It will be highly experimental and no two performances are likely to be the same.’

The memoirs detail the West End impresario’s childhood in Kensington, West London, up until the opening night of the Phantom of the Opera in 1986.

Lloyd Webber also opened up about his relationship with writing partner Sir Tim Rice in the book. 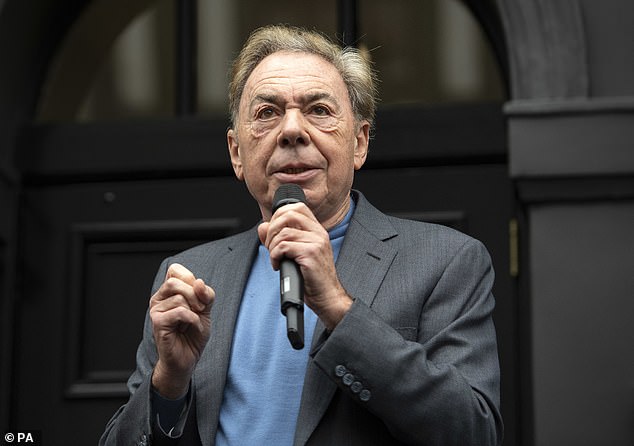 He said: ‘Tim was sick of my tantrums. The problem was exacerbated because the more laid-back he was about everything, the more wound up and passionate I became.

‘My defence is that I care so much about getting sound right. Forty-plus years on I haven’t changed.’

Andrew Lloyd Webber has composed 13 musicals throughout his career, including Cats, The Phantom of the Opera, and, most recently, School of Rock.