‘I was sad, but not surprised, to see that such unhinged public attacks on me would continue into my life after my service to the FBI,’ McCabe wrote of the President’s tweets in a Friday op-ed for the Washington Post.

McCabe wrote that he was waiting pensively for his ‘long-planned, earned retirement’ to kick in when he learned he’d been fire on March 16, just 26 hours before his pension was due to kick in.

Attorney General Jeff Sessions announced the firing in a statement, saying that an investigation had found that McCabe had ‘made an unauthorized disclosure to the news media and lacked candor – including under oath – on multiple occasions’. 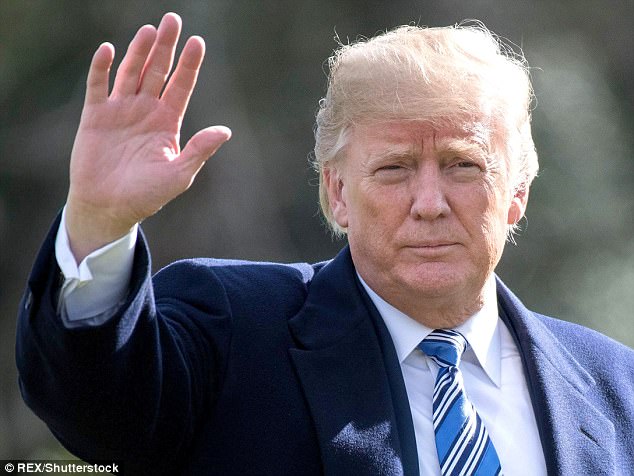 Trump tweeted out his delight at the firing just hours after Attorney General Jeff Sessions announced it. Pictured: Trump waves to the press as he leaves the White House on Friday

McCabe blasted back at those allegations in his op-ed, saying they were simply ‘not true’.

‘I did not knowingly mislead or lie to investigators. When asked about contacts with a reporter that were fully within my power to authorize as deputy director, and amid the chaos that surrounded me, I answered questions as completely and accurately as I could,’ he wrote.

‘And when I realized that some of my answers were not fully accurate or may have been misunderstood, I took the initiative to correct them.

‘At worst, I was not clear in my responses, and because of what was going on around me may well have been confused and distracted — and for that I take full responsibility. But that is not a lack of candor,’ he continued.

McCabe also wrote of the gut-wrenching feeling of discovering he’d been fired, when a friend called to say she’d seen the news on CNN before he checked his work email and saw an official notification.

‘Despite all the preparation for the worst-case scenario, I still felt disoriented and sick to my stomach,’ McCabe said. 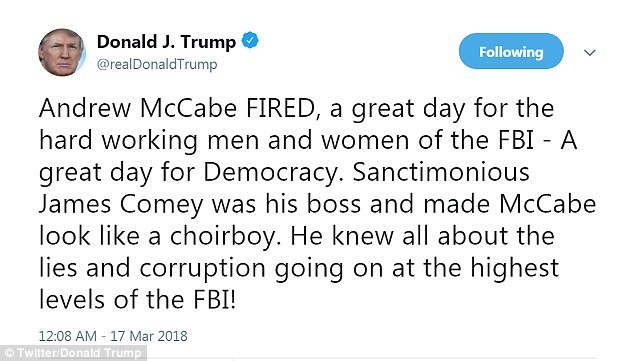 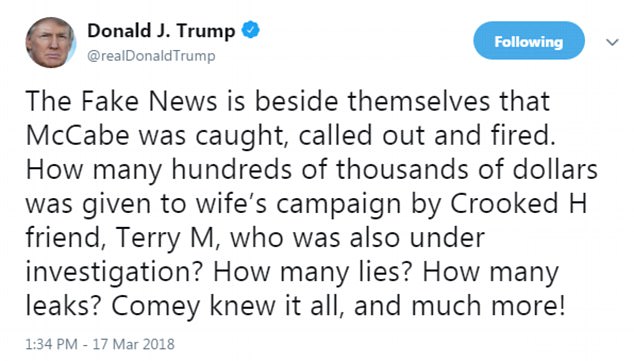 Hours later, Trump tweeted out his delight at the firing. ‘Andrew McCabe FIRED, a great day for the hard working men and women of the FB – A great day for Democracy,’ wrote Trump.

‘Sanctimonious James Comey was his boss and made McCabe look like a choirboy. He knew all about the lies and corruption going on at the highest levels of the FBI!’ Trump continued.

Trump fired Comey as FBI director last May, citing his handling of the Clinton email investigation.

The President had long accused McCabe of being a Democrat apparatchik and of also bungling the Hillary Clinton email investigation, but said the firing decision was up to Sessions.

‘I was sad, but not surprised, to see that such unhinged public attacks on me would continue into my life after my service to the FBI,’ McCabe wrote.

‘President Trump’s cruelty reminded me of the days immediately following the firing of James B. Comey, as the White House desperately tried to push the falsehood that people in the FBI were celebrating the loss of our director,’ he continued.

‘The president’s comments about me were equally hurtful and false, which shows that he has no idea how FBI people feel about their leaders,’ wrote McCabe.