Of all the damning conclusions reached in the wake of the publication of the report of the Dyson Investigation, none can be so devastating as that reached by Diana’s brother Charles Spencer.

In his appearance on the BBC’s Panorama special last night, he drew a straight line between the lies and deception Martin Bashir told Princess Diana in the early autumn of 1995 to inveigle his way into an interview with her and her tragic death in a Paris road tunnel car crash two years later. And he’s right.

I have believed that connection ever since this newspaper and its Sunday sister exposed the lengths Bashir went to deceive and con his way into her good books — and have said so publicly several times. Now that I’ve read Lord Dyson’s report on the whole sorry saga I’m more convinced than ever.

Charles Spencer concluded Bashir was a liar and/or a fantasist and had no more to do with him. Pictured,  Diana, Princess of Wales, during her interview with Martin Bashir for the BBC

Much has been made of the bank statements Bashir forged to make out those close to her and her family were selling her secrets to the Press. But these fakes were to sucker her brother into facilitating a meeting for Bashir with Diana. Of course, it worked.

Within weeks of Bashir presenting Charles Spencer with the forgeries, the three of them were together in a flat in London.

But far more important to Diana than any bank statements were what Bashir told her at that first meeting. As recorded in her brother’s contemporaneous notes of the encounter, Bashir said that her car was being constantly tracked, her phones tapped and senior figures in the royal court were determined to do her down. Even her bodyguards were plotting against her.

Charles Spencer concluded Bashir was a liar and/or a fantasist and had no more to do with him.

But Diana was taken in. Bashir had played on her growing paranoia that somehow the British ‘Establishment’ was out to get her, at worst plotting her death and at best arranging enforced exile in America. And here was a reporter from the BBC’s flagship Panorama programme telling her it was all true.

She concluded that to survive she had no alternative but to cut off as much contact with the royal apparatus as she could, including the security and protection it offered senior royals.

Now spool on to 1997 — her explosive interview with Bashir for the BBC fading somewhat from memory, divorced from Prince Charles, her HRH royal title taken from her. Diana, in public at least, cut a somewhat forlorn, lonely figure. Cue Dodi Fayed, son of the fabulously wealthy owner of Harrods, Mohamed Al-Fayed.

Dodi was a charming, polite if somewhat vacuous young man who didn’t do very much and lived in his father’s shadow. But his family could provide all the trappings and riches of royalty — private jets, massive yachts, huge houses, the world’s best hotel suites — and, very important, expensive security.

On the face of it, the security was particularly impressive. I saw a fair bit of Mohamed in the mid-1990s. He once told me he had more than 40 bodyguards working in shifts 24/7. When we travelled the short trip from his flat on Park Lane to Harrods, we sat in a reinforced Mercedes while security details in Range Rovers accompanied us front and back.

When Diana began an affair with Dodi in the summer of 1997, this all became hers to use. The Al-Fayed security cocoon must have seemed at least as good as anything the British state could offer. But it wasn’t.

On that fateful August night in 1997 in Mohamed’s Paris Ritz Hotel, the paparazzi and public milling around outside, Dodi said they could sneak out the back door and dash to the privacy of his apartment. But the security detail was not keen. They insisted on consulting his father, their real boss. 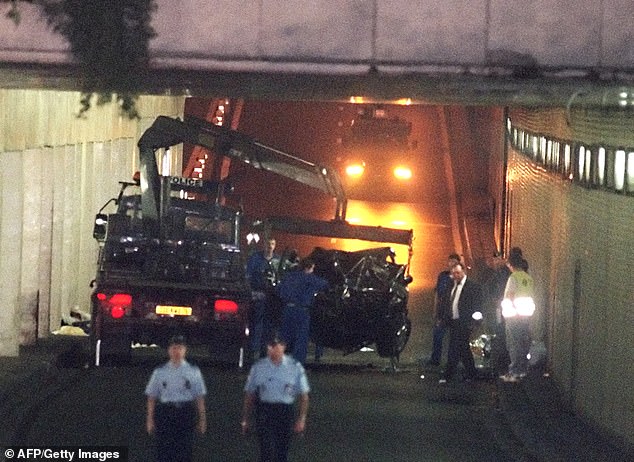 Tragic result: The wreckage of Princess Diana’s car is recovered from the Paris tunnel after the fatal crash on August 31, 1997

Mohamed told me only a few days after that terrible car crash that he had initially sided with his security.

But Dodi talked him into allowing them to make a break for it. With tears in his eyes, he told me it was his worst decision ever, one he would regret for the rest of his life.

The world knows the fatal, terrible consequences that followed. But if Diana had still been under the protection of official British security, her death would most likely never have happened.

Her close-protection officers would either have refused to sanction the Dodi dash (they would have had the authority to do that). Or they would have reluctantly agreed — but with a proper driver who was not dangerously intoxicated. Either way, Diana would have lived.

And that’s what I mean by the straight line between Bashir’s deception and Diana’s death. It is possible she might have spurned her security even without Bashir’s lies as she became ever more distant from the Royal Family. But in my view Bashir’s self-serving lies are what really propelled her down that fatal road.

There’s more. The BBC had plenty of chances to set the record straight quite soon after Bashir’s interview. It was always a mystery to us in the BBC current affairs department (where I worked at the time) how this relatively obscure journalist had pulled off the interview of the century.

Distinguished reporters at Panorama, only a month after the interview in December 1995, began to suspect he only landed it because of various sleights of hand and deceptions, all against BBC journalistic guidelines.

But the then editor of Panorama, the late Steve Hewlett, sent them away with a flea in their ear, saying it was ‘none of their business’. Thus was the first chance to reveal the truth about Bashir aborted.

Newspapers, including this one, began publishing investigative pieces revealing Bashir’s underhand techniques. But instead of taking them seriously, the BBC dismissed them out of hand.

The official line was ‘it’s not interesting’ and ‘not newsworthy’. Word went out that programme editors should not publicise the newspaper reports or follow them up. Another lost opportunity to establish the truth about Bashir.

Then, in the spring of 1996, there were two internal BBC inquiries into Bashir, the more important one involving Tony Hall, then head of news and current affairs who went on to become director-general. Both gave Bashir a clean bill of health.

The Hall inquiry concluded their reporter was an ‘honest and honourable man’, even though it was known Bashir had lied three times to the BBC and had no credible explanation for why he had forged the bank statements. No wonder the Dyson Report dismisses it as ‘woefully ineffective’. And yet another failure to get to the truth in time.

Of course, the institutional force inside the BBC not to reveal the murky truth was huge. The interview had been a global scoop, winning a huge domestic audience, shown on every major network across the world and showered with awards. There was no incentive inside the BBC to rubbish one of its greatest journalistic coups.

But the cost of this cover up has been incalculable. If, as could easily have happened, it had been revealed within months of the interview that everything Bashir had told Diana was nothing but lies, fake news and forgery, then she might have realised the ‘Establishment’ was not out to get her and that there was no need to cut herself off entirely from it.

But such a revelation never came in time. The BBC stood by its story and reporter for more than two decades, repelling and dismissing any who dared to challenge. It scaled the moral high ground during the great Fleet Street phone hacking scandal. All the while drawing a veil over its own cesspit. While the people lost their Princess.