Doting dad Andy Cohen gives his son Ben, two, a ride on his shoulders as he strolls around New York City

Andy Cohen was spotted carrying his young son, Ben, on his shoulders as they strolled around Manhattan’s West Village neighborhood on Saturday morning.

The 53-year-old television personality appeared to be every inch the devoted dad as he flashed a smile while spending a bit of quality time with his two-year-old child.

The Watch What Happens Live With Andy Cohen host welcomed his son into his life in February of 2019 after announcing that he would become a father the year prior.

Doting dad: Andy Cohen appeared to be enjoying himself while carrying his young son Ben on his shoulders as they strolled along the sidewalks of Manhattan’s West Village on Saturday morning

Cohen kept it very casual during the father-son outing, as he was seen wearing a bright orange t-shirt featuring a graphic print of the Hot Wheels logo.

The entertainment industry powerhouse kept his laidback ensemble going with a pair of dark beige cutoff shorts and a set of black sandals as he pounded the pavement.

His salt-and-pepper hair contrasted well with the purple-blue shade of his eye-catching aviator-style sunglasses during the outing. 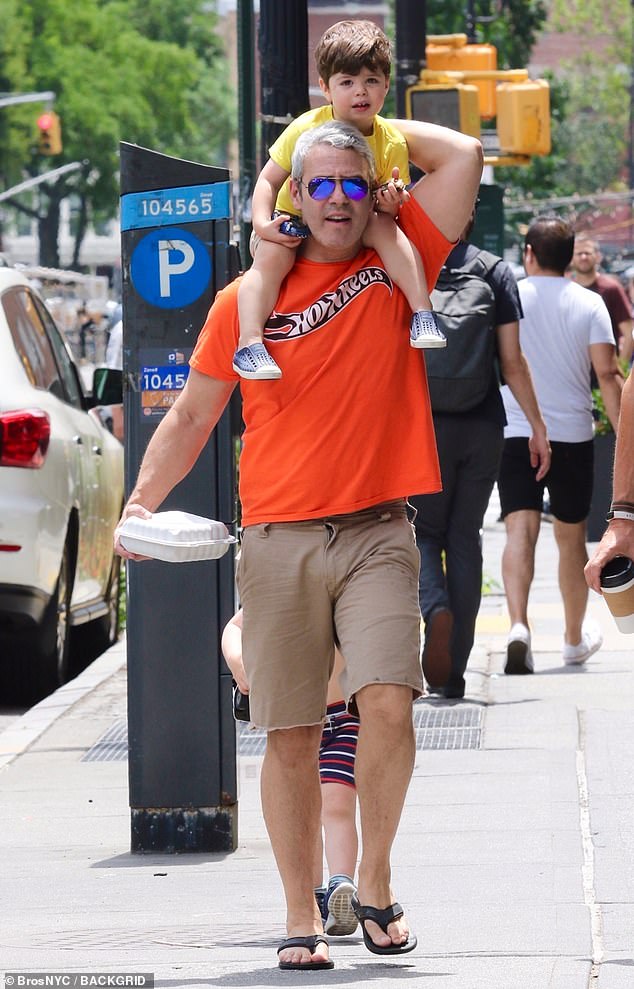 Laidback dad: The reality television figure wore a graphic-printed t-shirt and cutoff shorts while spending time with his young son

Cohen initially announced that he would become a father in December of 2018 while hosting a New Year’s Eve special with Anderson Cooper.

During the appearance, the executive producer of the Real Housewives franchise noted that he would be welcoming his child with the assistance of a surrogate.

In February of the following year, he announced that his child had arrived and that he had given his kid the name Benjamin Allen as a tribute to his maternal grandfather.

The entertainment industry figure’s son has since appeared on his Instagram account several times in the recent past, as Cohen has become comfortable with showing the toddler’s face. 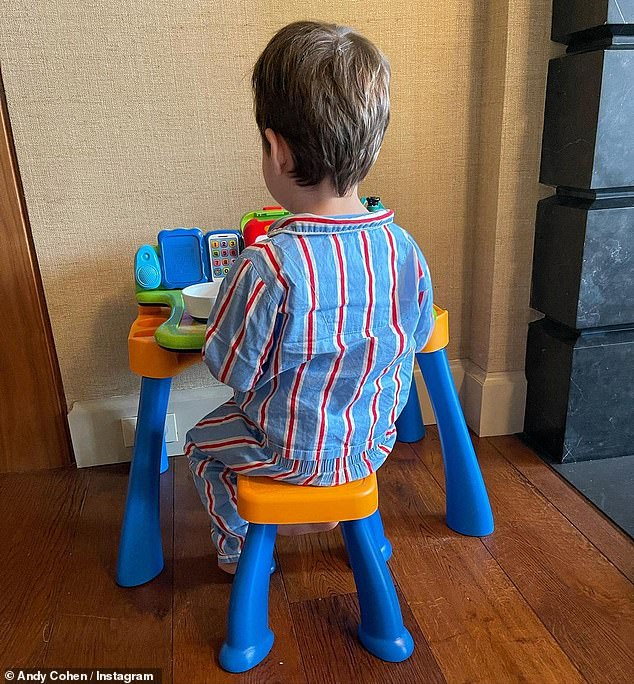 Special arrival: Cohen initially announced that he was going to become a father in December of 2018, and welcomed his son with the aid of a surrogate the following February 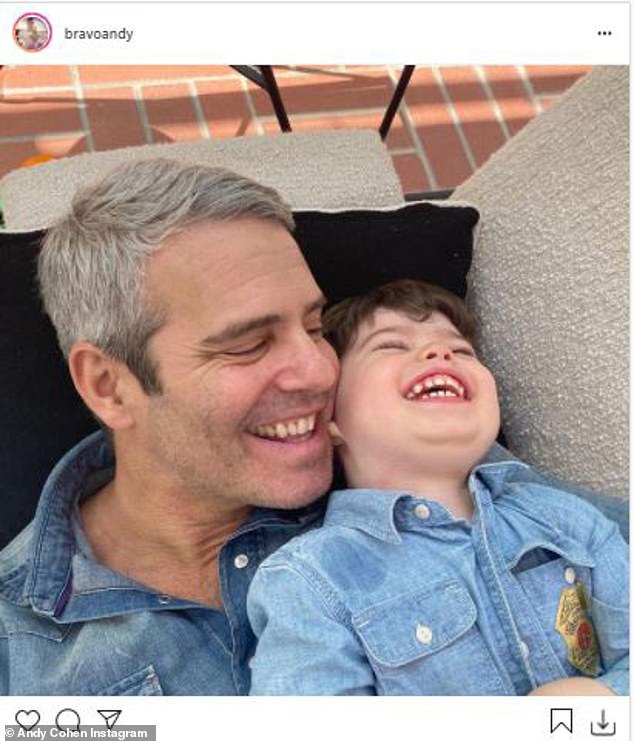 On Father’s day, the television developer shared a heartwarming selfie of the two lying down and spending quality time together.

The father-son duo both wore denim button-down shirts for the sweet snap.

Shortly after Benjamin’s birth, Cohen spoke to People and noted that several of the figures that he works with had helped him adjust to parenthood.

The producer stated: ‘The Housewives have given me a lot of advice. All their mom instincts came out.’ 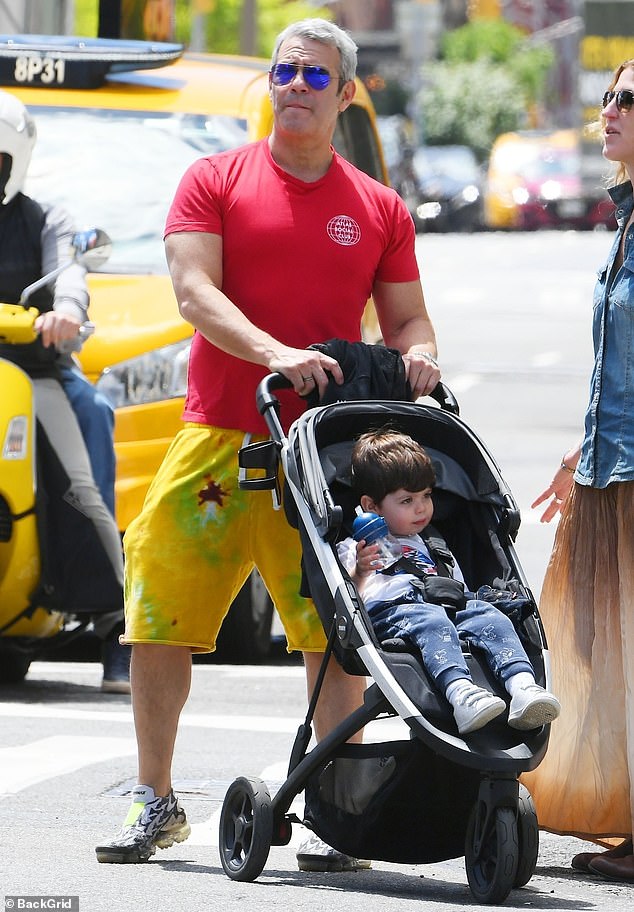 Serious help: Shortly after his son was born, the producer spoke to People and expressed that many of the Real Housewives’ ‘mom instincts came out’ when they offered him parenting advice; he is seen with Ben in May

He also pointed out that, although the personalities from the Real Housewives series are known for their boisterous personalities, they were much more toned-down and informative when assisting him in his early days of being a father.

‘As loud and funny and aggressive and wild and dramatic and everything you want to say about the Housewives, as much of all that as they are, they’re all moms, pretty much. And they’re all good moms,’ he said.

Cohen also remarked that several other entertainment industry figures had offered to help him adjust to his change of lifestyle.

‘Sarah Jessica [Parker] sat with me for three hours on a Saturday and helped me do my registry. And she lent me clothes and burp cloths…She left me a big plastic container full of things that she knew I would need,’ he recalled. 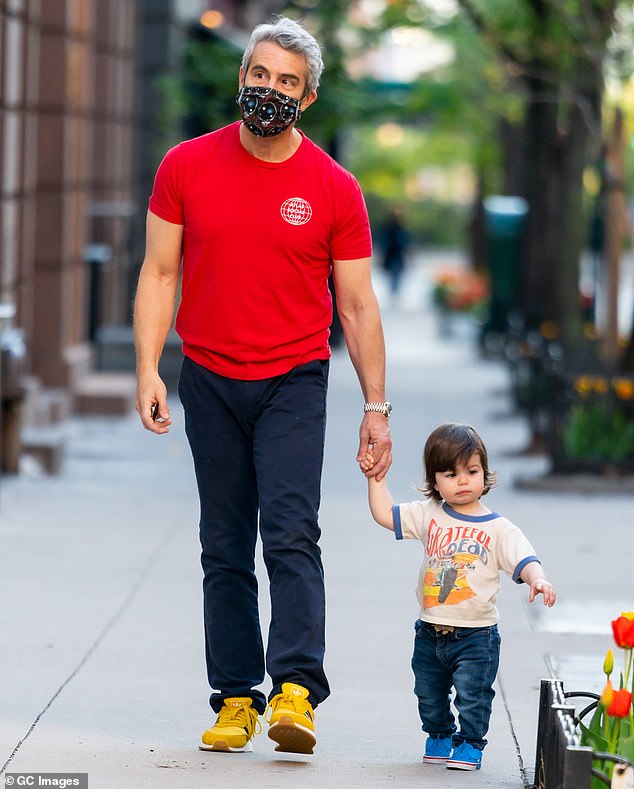 Appreciative: Cohen gushed about how helpful many of the Housewives were and pointed out that they were ‘all good moms’; he is seen with his son in May of last year