He was executive producer of her six-season reality show Kathy Griffin: My Life on the D List.

But Andy Cohen joked that he had never heard of Kathy Griffin, after replacing the sacked star as Anderson Cooper’s co-host on CNN’s New Year’s Eve coverage.

Comic Kathy was not happy – responding on Twitter: ‘Even when it’s on tape, there are doubters? He is NOT kidding w paps.

‘Was my boss for 10 years. Treated me like a dog. Deeply misogynistic.’

‘Who?’ Andy Cohen pretends not to know Kathy Griffin after replacing her as CNN’s New Year’s Eve host… but she angrily brands him ‘misogynistic’; he is seen last week

The comments which sparked the  56-year-old’s fury were made during an impromptu sidewalk interview with a cameraman from TMZ.

Watch what Happens Live host Cohen first said he was ‘really psyched’ about his new gig.

But when asked if he had spoken to Kathy, Cohen made it clear he had no intention of doing so, joking around as he said ‘Who?’ and insisted he ‘didn’t know’ her. 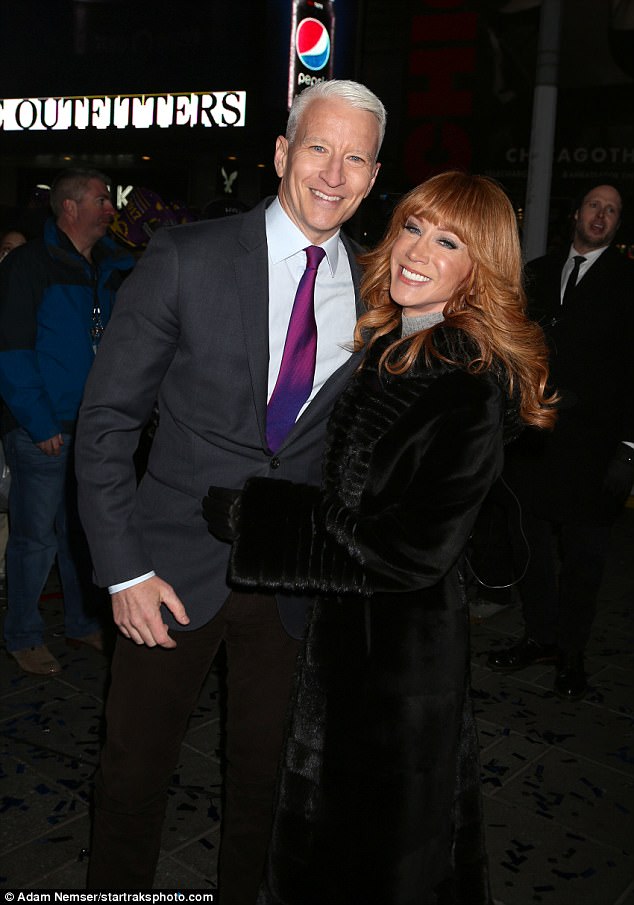 Ditched: Kathy was fired as the co-host of CNN’s NYE coverage earlier this year; she is seen on last year’s show with Anderson Cooper

Griffin and Cooper had co-hosted CNN’s NYE coverage every year since 2009.

Now in its 11th year, CNN’s New Year’s Eve show is a global celebration featuring contributions from CNN correspondents across the country and around the world.

However Griffin was ditched by CNN in May after posting a skit online showing herself holding  a model of Donald Trump’s bloody severed head.

The controversy following the video also saw her tour cancelled, despite Griffin making a tearful public apology to the President.

Cooper himself tweeted his disdain for Griffin’s actions at the time.

‘For the record, I am appalled by the photo shoot Kathy Griffin took part in. It is clearly disgusting and completely inappropriate,’ he wrote in tweet.

Griffin then said in an interview that any friendship between the two was ‘over’.