Andy Murray’s u-turn about playing on clay this spring was looking a smart decision on Monday night when he defeated former French Open finalist Dominic Thiem.

The 34 year-old Scot became the fifth Brit out of five to win their opener at the Madrid Open when he beat the Austrian 6-4 6-3.

Murray only decided to venture onto the clay following a training block with Ivan Lendl in Florida, after which he could not find a suitable hard court event in which to play. 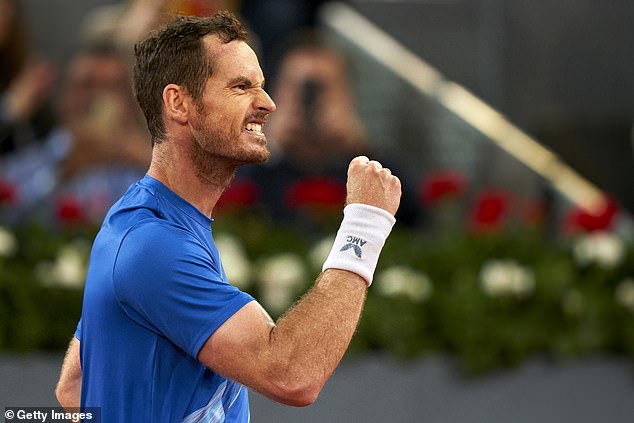 Murray, who was given a wildcard to the tournament, will meet Denis Shapovalov next

Given a wildcard into Madrid, he took advantage of what has now become a less fearsome draw than it was two years ago. Thiem has been struggling with severe wrist problems and his forehand is not what it used to be at present.

Murray could rightly be pleased with his movement and used the drop shot expertly.

He will play Denis Shapovalov, who defeated Ugo Humbert.

Murray said: ‘I played well. I thought Dominic was playing well at times but he has obviously just started playing again so is making a few more mistakes than usual.’

Earlier Cam Norrie, who has been fighting a heavy cold, also made the second round when he overcame Korea’s Soonwoo Kwon 7-5 7-5. He will face American John Isner.