Andy Murray to retire this year

Andy Murray is contemplating almost immediate retirement after appearing to give up hope of coming close to recovering from the hip problems that have dogged him for more than eighteen months.

In an emotional press conference this morning the two-time Wimbledon champion was in tears as he revealed that this Australian Open, starting on Monday, could be the last tournament he plays.

Murray seems to have been finally overwhelmed by the struggle to overcome the hip issue that first surfaced in earnest during the grass court season of 2017.

Andy Murray, Britain’s greatest ever tennis player, is set to retire this year due to a hip injury 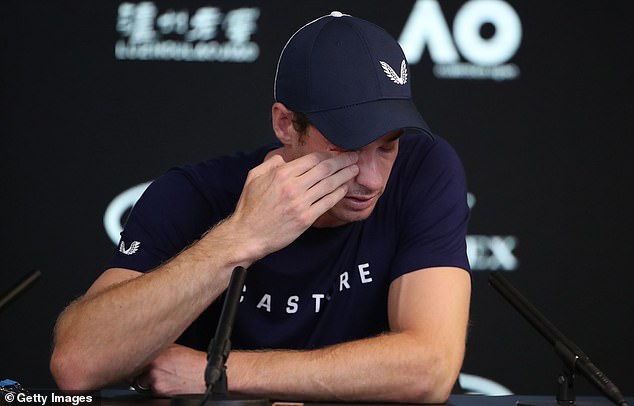 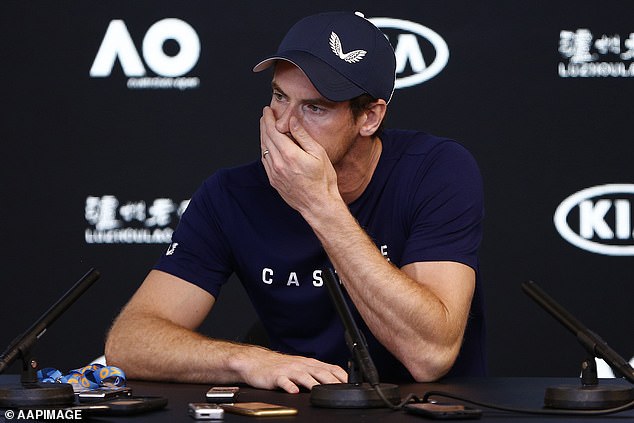 He has wanted to go on until Wimbledon this summer but feels that even that may be a bridge too far. The 31 year-old Scot, who was thrashed in a practice match by Novak Djokovic on Thursday, still plans to take his place in the Melbourne draw but could not rule out that he would have to walk away if he loses to Spain’s Roberto Bautista Agut.

If he did it would bring down the curtain on one of the greatest British sporting careers of recent times in a sport in which Britain has had scant success.

Murray began his press conferece by replying ‘I’m not great’ when asked how he was feeling. He then became emotional and left the room for several minutes to compose himself.

Upon returning he talked of how the pain in his hip had become of such an order that even the simple act of putting on socks was causing him difficulty. It seems that his dream of his daughters being able to watch him seriously compete is now, sadly, at an end. 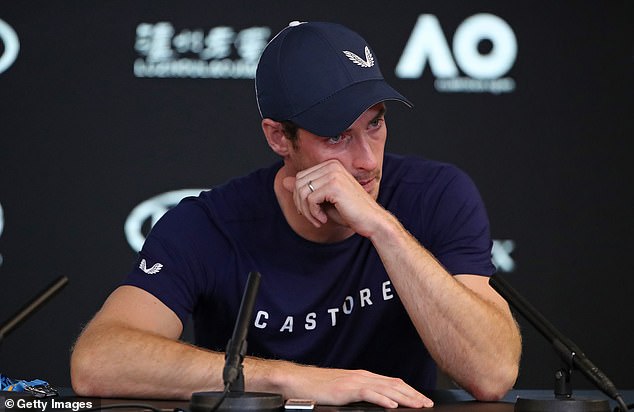 The 31-year-old will still play in the Australian Open, where he faces Roberto Bautista Agut 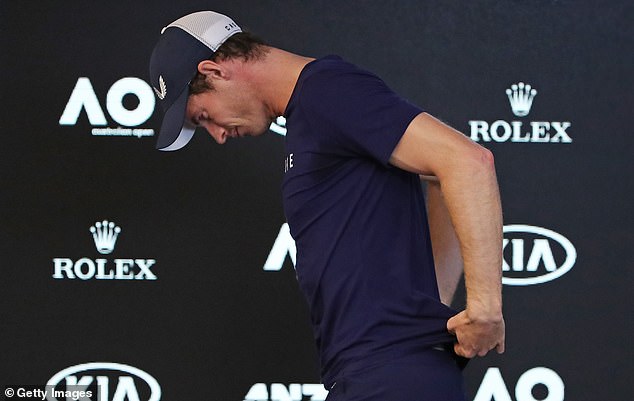 Murray wants to finish his career at Wimbledon this year, but admits his fitness may stop that

‘Obviously I have been struggling a long time and I have been in pain for about twenty months now,’ he said. ‘I’ve pretty much done everything that I could to try and get my hip feeling better and it hasn’t helped loads. I’m in a better place than I was six months ago but still in a lot of pain. It’s been tough.

‘I’m going to play here. I can still play to a certain level, not a level I’m hapy playing at. It’s not just that. The pain is too much really, I don’t want to continue playing that way.

‘I’ve tried pretty much everything I could do but it hasn’t worked. In the middle of Decdember I spoke to my team and told them I can’t keep doing this. I thought I need to have an end point, because I was playing with no idea of when the pain was going to stop.

‘I said to them maybe I could get through this until Wimbledon, that is where I would like to stop playing but I am also not certain I am able to do that.’

Asked whether this could turn out to be his last event he replied ‘There’s a chance of that for sure.’

Murray would love to be able to take his final bow on the Centre Court but things have got so bad that he may not get to depart at the time and place of his choosing. 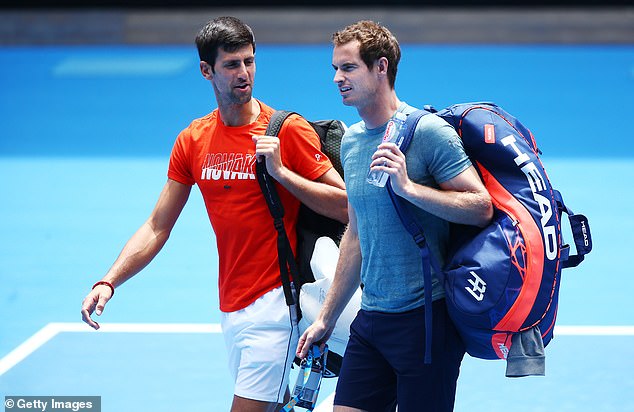 ‘I’m not sure I’m able to play through the pain for another four or five months. I have considered another operation that is a little more severe (than the one he had this time last year). I could have my hip resurfaced which would allow me a better quality of life. I’m seriously considering that right now but there’s no guanratees with it.’

‘It would be nice to do things without any pain, putting shoes and socks on, that would be the amin reason for me doing it.’

He sounded very pessimistic that it would be the kind of surgery that would allow him to play again. He even ruled out the idea of becoming a doubles player, which would require less movement.

Murray saw his Australian surgeon, John O’ Donnell on Thursday, the same man who operated on him on January 8 last year.

‘I have a severly damaged right hip,’ was Murray’s conclusion. ‘the pain is not allowing me to enjoy competing.’

He also spoke of the mental turmoil of having to answer questions about his health: ‘everyone I bump into that’s all they want to talk about, it’s pretty draining. I have spoken to psychologists about it. It’s not fun or enjoyable.’

Murray’s career highlights include two Wimbledons, a US Open title and two Olympic gold medals, at London and Rio. He also carried Great Britain to victory in the 2015 Davis Cup, winning eleven matches over four rounds under the old format.

However it now appears that it is purely a question of whether he can get through the next few weeks, let alone recapture former glories.

Reaction to the news was swift on Thursday night, with America’s former world number one Andy Roddick leading the way.

He took to Twitter, writing: ‘I tip my cap to @andy_murray ! Absolute legend. Short list of best tacticians in history. Unreal results in a brutal era …… Nothing but respect here. I hope he can finish strong and healthy.’ 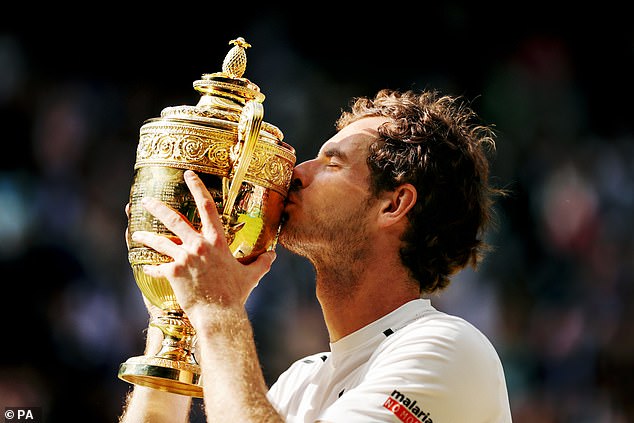 Murray is a two-time Wimbledon winner, a US Open winner and a former World No 1 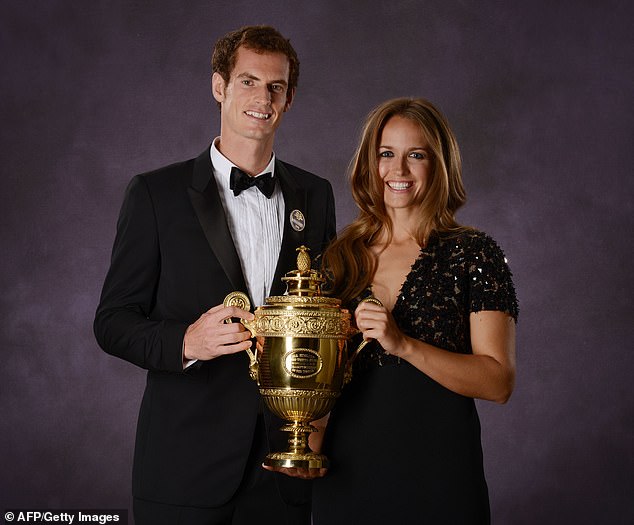 Murray poses with the Wimbledon trophy, and his wife Kim, after his first victory in 2013

1 – Murray became the first British singles player ever to officially be ranked world number one on November 7, 2016.

41 – The number of weeks the Scot spent on top of the rankings.

2 – Doubles titles, both with brother Jamie

9 – Singles titles in 2016, including five in a row to end the season as world number one

11 – Murray won all 11 rubbers he contested to drive Great Britain to Davis Cup glory in 2015, an unprecedented feat