Angela Merkel: Brexit is a ‘wake up call’ for the EU

Brexit is a ‘wake up call’ for the EU and shows the bloc must up its game, warns German Chancellor Angela Merkel

Angela Merkel has warned the UK’s decision to leave the European Union must act as a ‘wake up call’ for the bloc.

But the German Chancellor, who is due to step down next year at the end of a fourth and final term in power, insisted countries are better off in the EU than outside it.

She said the bloc acted as a ‘life insurance’ policy for ‘small’ countries like Germany and ensures they can exert influence on the global stage.

Angela Merkel, pictured in Berlin yesterday, said Brexit needed to act as a ‘wake up call’ for the EU

Britain will split from Brussels on January 31 when it will then enter into a standstill transition period when the two sides will try to hammer out the terms of a future trading relationship.

However, the UK and the EU are already on a collision course over how closely aligned they will be after Brexit with Brussels favouring a closer relationship while Boris Johnson wants more room to diverge from the bloc.

Ms Merkel used an interview with the Financial Times to warn that Brexit was a ‘wake up call’ for the EU.

She suggested that the EU needed to up its game and to become more ‘attractive, innovative, creative’.

Many in the EU fear that if the UK is not tied to rules made in Brussels then it could strike its own path and lure European businesses away from the continent.

Ms Merkel said she believed the EU was still a force for good.

‘I see the European Union as our life insurance,’ she said.

‘Germany is far too small to exert geopolitical influence on its own, and that’s why we need to make use of all the benefits of the single market.’ 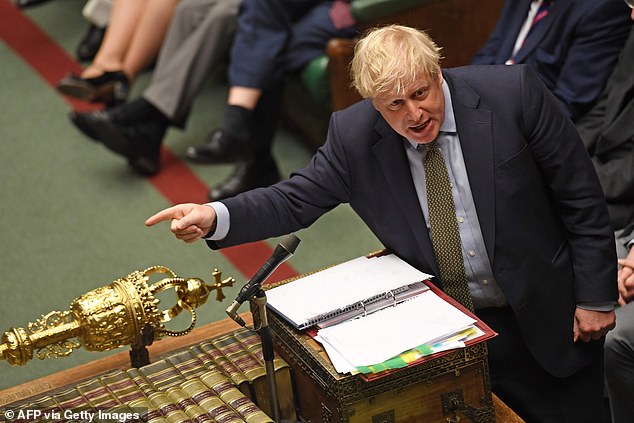 Boris Johnson, pictured in the House of Commons yesterday, has ruled out any extension to the Brexit transition period

Her comments came after Ursula von der Leyen, the president of the European Commission, said it will be exclusively up to the UK whether there is an extension to the Brexit transition period.

Ursula von der Leyen said: ‘There is only one of the two who can ask for an extension and that is the United Kingdom. We will see mid-year where we are at.’

Mr Johnson has ruled out any extension and is adamant that December 2020 must be treated as a hard deadline for the trade talks.