Angela Merkel has taken a dig at Brexit as she praised the founders of global institutions such as the EU as people ‘who knew what they were doing’.

Speaking at the World Economic Forum in Davos today, the German chancellor said she feared the ‘knowledge and insight’ of politicians who set up international bodies after World War II would be forgotten.

In her speech – which could be her last appearance at the annual event – Merkel made a vigorous defence of international institutions such as the International Monetary Fund and the United Nations.

She said Germany and the EU were ‘dependent’ on a good relationship with Britain but said it was partly ‘up to Britain’ to ensure one.

Angela Merkel, pictured speaking at the World Economic Forum in Davos today, praised the ‘knowledge and insight’ of leaders who set up international institutions after World War II

Speaking today she said: ‘When you look at human history, the key decisions for our current international order are about 74 years ago, that’s a human lifespan.

‘After the horrors of World War II the people who were then in power had certain insights and they knew what they were doing.

‘We shouldn’t cast their decisions aside and the system they set up and treat it lightly, because they did so against a wealth of experience.

‘I think the right conclusions were drawn back then.’

She said European leaders have to ‘live with the shock’ that Britain voted to leave the EU, bringing 44 years of membership to an end.

‘All my thoughts and energy are directed at ensuring an orderly Brexit, in which we can have a good partnership that benefits everyone,’ she said.

‘In security and defence we are urgently dependent on an agreement.

‘The less complicated our relations are, the better, but of course that’s also up to Britain’. 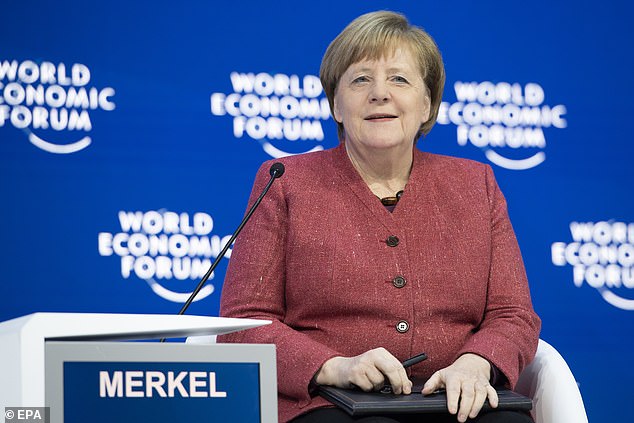 She took aim at politicians who ‘think the world is best when everyone looks out for themselves’.

‘I doubt that. I think we should interpret our national interests in such a way that we think about the interests of others and achieve win-win situations,’ she said.

Organisations such as the IMF and World Bank set up after World War II had helped to make the world a better place, she said.

Merkel has faced severe pressure in Germany amid a series of poor election performances by her ruling CDU party.

She has stood down as party leader and was replaced last month by Annegret Kramp-Karrenbauer, one of her possible successors.

At the end of her Davos appearance she hinted world leaders would miss her when she was gone.

Asked if she would return to Davos she said: ‘Well you’ve got me today – you should be happy with what you’ve got.