Mirror, mirror on the wall, what’s the fairest deal of all? Angela Merkel poses with gift from President Erdogan as they discuss EU aid for Turkey in return for migrant crisis help

Angela Merkel was presented with a mirror as she met with Turkish president Recep Tayyip Erdogan.

The German Chancellor could be seen peering at her reflection after being handed the gift during a visit to Istanbul.

Both leaders laughed as the 65-year-old inspected her gift at the opening ceremony of a Turkish-German university’s new campus on Friday.

Merkel and Erdogan are expected to hold talks focusing on the future of the migration deal between Turkey and the EU that helped decrease refugee flows to Europe.

The visit comes amid fears of a possible new refugee influx as thousands flee new Syrian government attacks in a northern Syrian province.

Already, the number of migrants entering Europe from Turkey rose significantly last year as people fleeing conflict in Syria and Afghanistan arrived in Greece, leading to deteriorating conditions in overcrowded camps on the eastern Aegean islands. 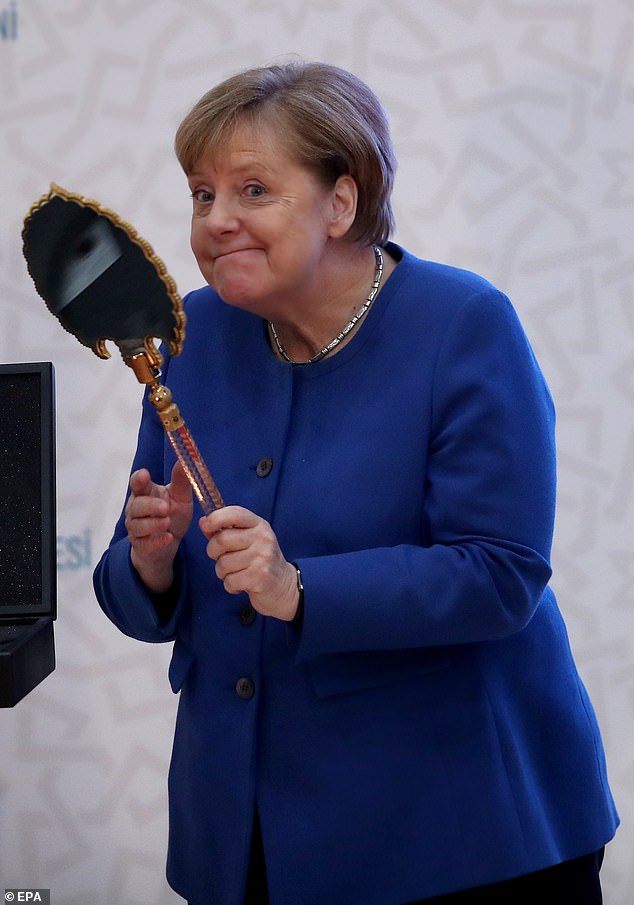 Merkel is presented with a mirror from Erdogan on Friday 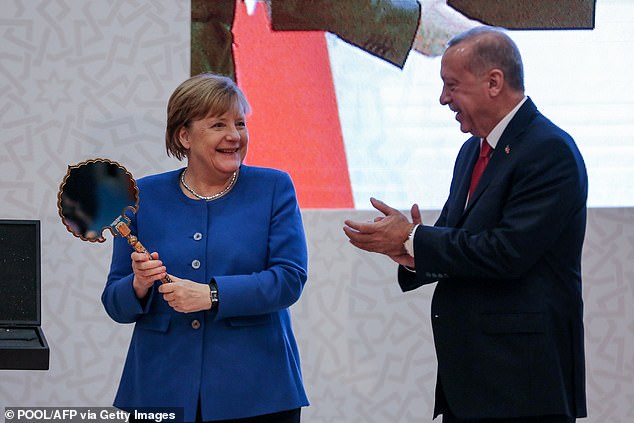 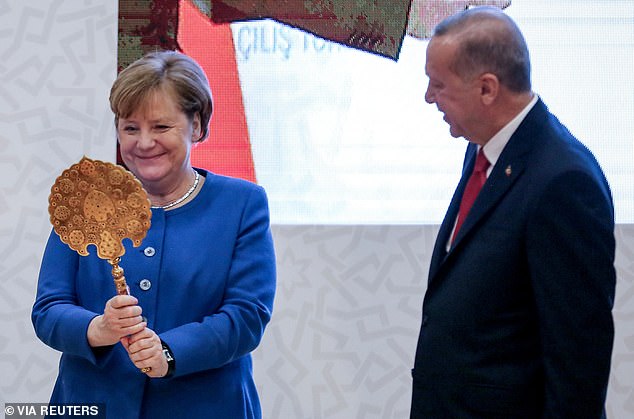 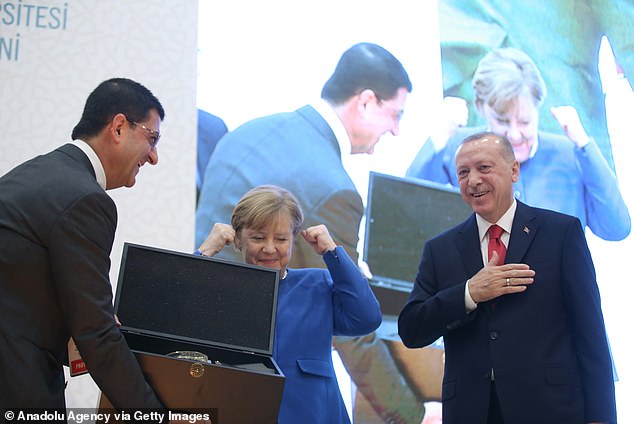 Angela Merkel is presented with the gift. Merkel arrived in Istanbul days after she hosted a meeting in Berlin on the conflict on Libya, where world powers pledged to halt foreign interference and honor a widely violated arms embargo

Spearheaded by Germany, the EU agreed in 2016 to grant Turkey up to 6 billion euros ($6.6 billion) in Syrian refugee aid money and other incentives to persuade the government in Ankara to stop migrants leaving for Greece.

Erdogan, however, frequently accuses the EU of not fulfilling its side of the deal and has in the past threatened to ‘open the gates’ for migrants to depart for Europe.

He says his country cannot be expected to shoulder the burden of hosting more than 3.6 million Syrian refugees in Turkey alone and is seeking European support to settle Syrian refugees in a so-called ‘safe zone’ in northern Syria. European nations are reluctant to back such a proposal. 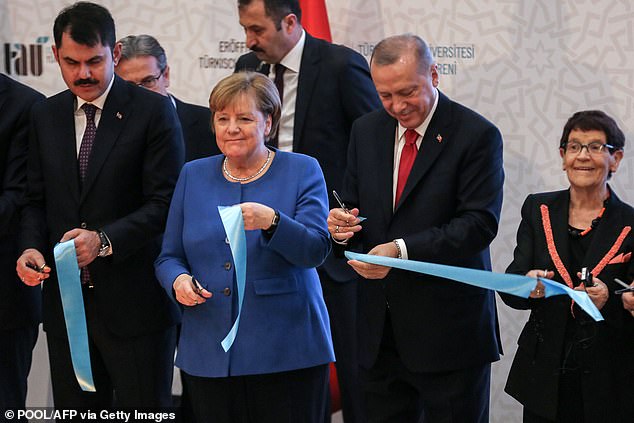 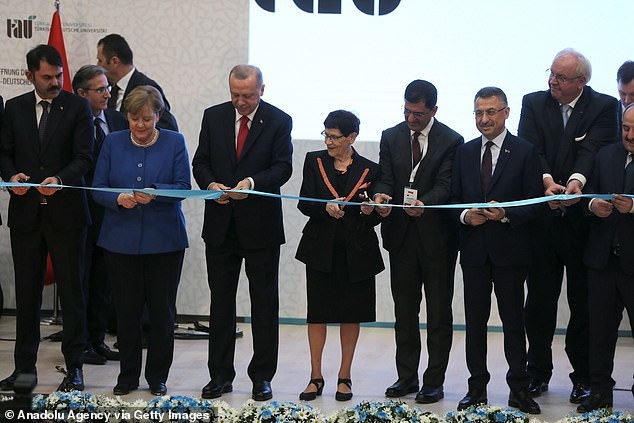 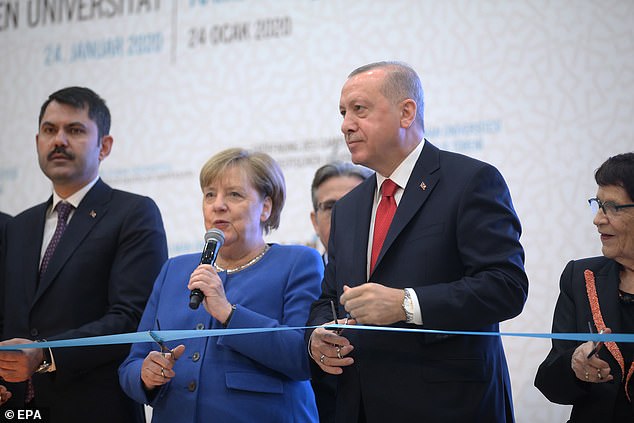 Merkel speaks during the Turkish-German facilities opening ceremony in Istanbul 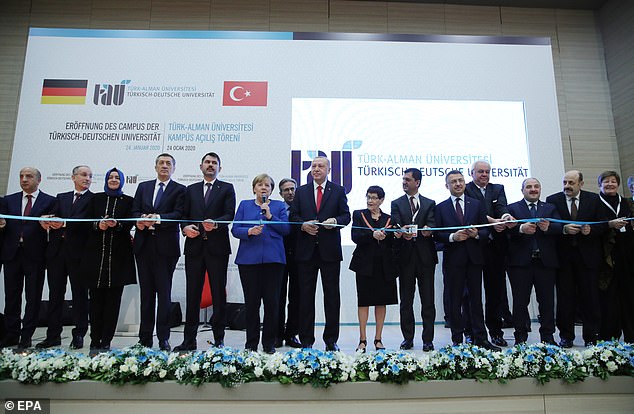 Merkel arrived in Istanbul days after she hosted a meeting in Berlin on the conflict on Libya, where world powers pledged to halt foreign interference and honor a widely violated arms embargo.

Turkey backs the embattled U.N.-backed administration in Libya and, in a contentious move, announced it had started to deploy troops. It later said it has deployed a team of trainers, not combat troops.

The chancellor’s visits also comes amid rising tensions with the EU over Turkey’s bid to drill for natural gas in waters in the eastern Mediterranean where EU-member Cyprus says it has economic rights. Cyprus last week denounced Turkey as a ‘pirate’ state that flouts international law.

Turkey, however, insists it’s protecting its rights and interests, and those of breakaway Turkish Cypriots, to the region’s energy resources. It says it’s carrying out drilling activities as part of an agreement with the Turkish Cypriots. 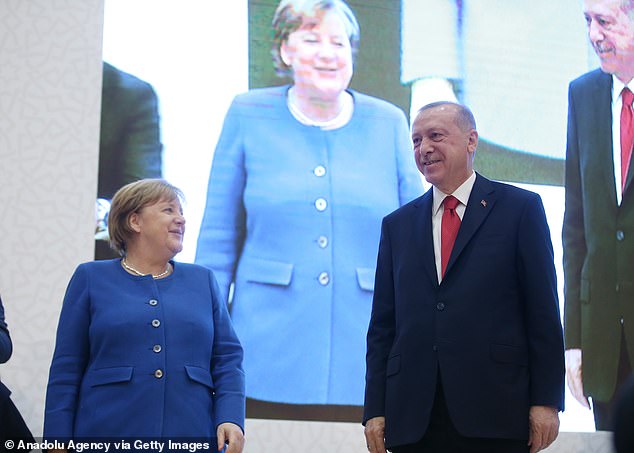 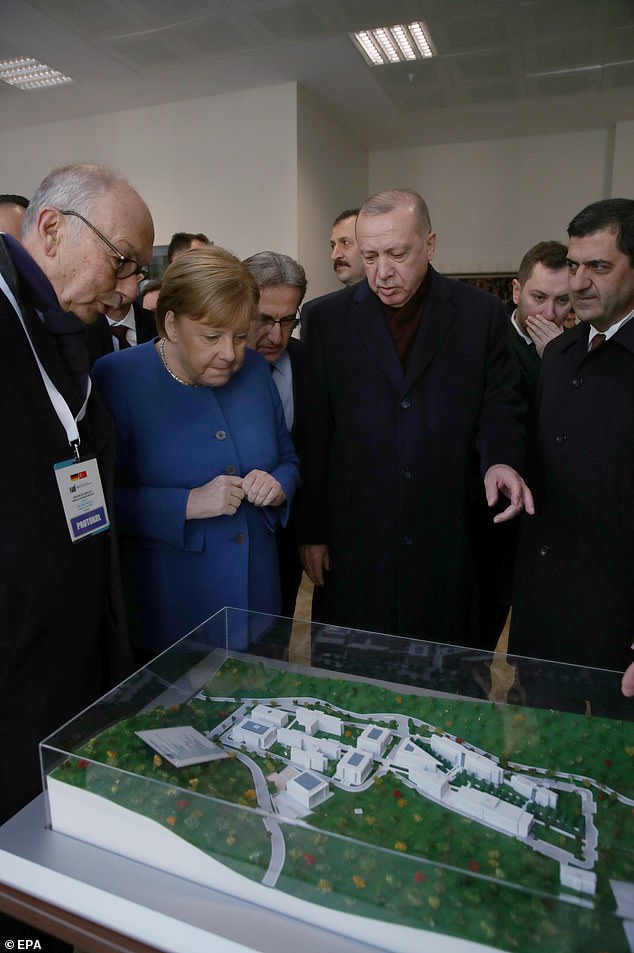