Angela Merkel has been impressed by Boris Johnson’s ‘professional’ approach as Prime Minister, but she has made clear to him that he needs to ‘move rapidly’ to secure a new Brexit deal, according to leaked EU minutes seen by The Mail on Sunday.

British officials who met their German counterparts in Brussels on Thursday were told that the German Chancellor regarded her first encounter with Mr Johnson in the run-up to last weekend’s G7 summit in Biarritz as ‘constructive and professional’.

According to the minutes of the meeting, UK negotiators have been told that Ms Merkel’s remarks during the meeting that Mr Johnson had ‘30 days’ to sort out a new Brexit deal was ‘not fixed’ – and a new deal was not expected before the next EU summit on October 17. ‘The German Government is clear that things can and need to move rapidly,’ the minutes say.

A firm grip: The Prime Minister Boris Johnson and German Chancellor Angela Merkel struggle to hide the grins during their meeting earlier this month 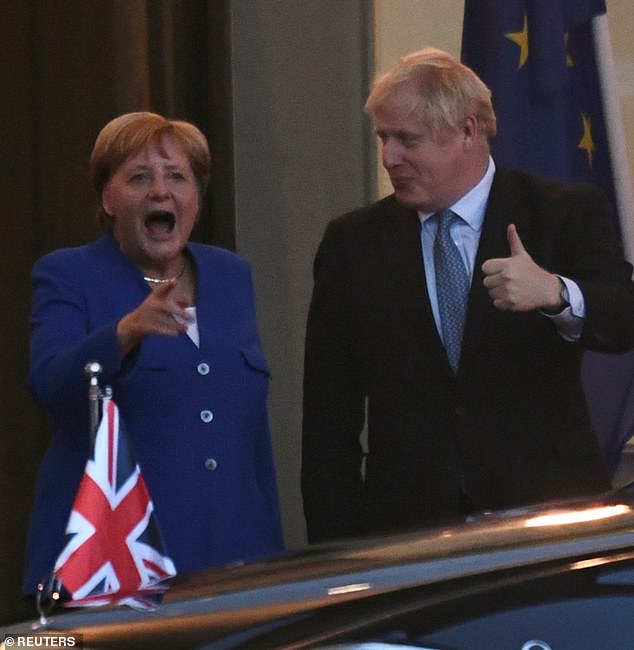 Johnson meets with Merkel at the Chancellory in Berlin, Germany. She regarded her first meeting with Johnson as ‘constructive and professional’ 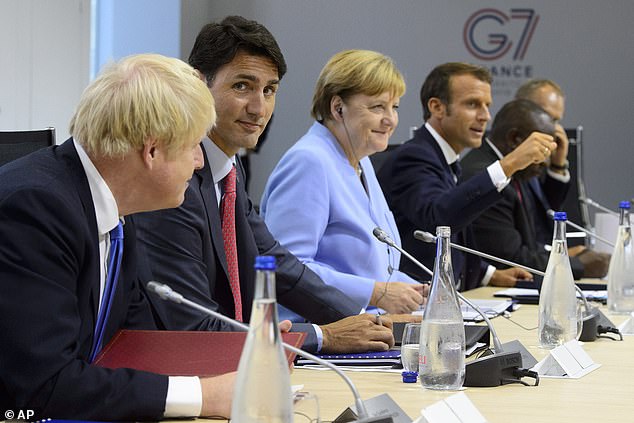 Merkel is pictured with a small grin as she sits at the G7 Summit in Biarritz, France, alongside Canadian Prime Minister Justin Trudeau where Johnson is in attendance

Last week, Mr Johnson said it was time to ‘step up the tempo’ in the talks and announced that senior aides from both sides will meet twice a week throughout September – with the possibility of additional meetings – in the hope of reaching a new Brexit agreement.

But the minutes of the meeting add: ‘Merkel still needs facts, and the German Government, as well as the rest of the EU, are waiting for concrete proposals from Johnson.

‘Once again the ball is in the UK Government’s court.’ 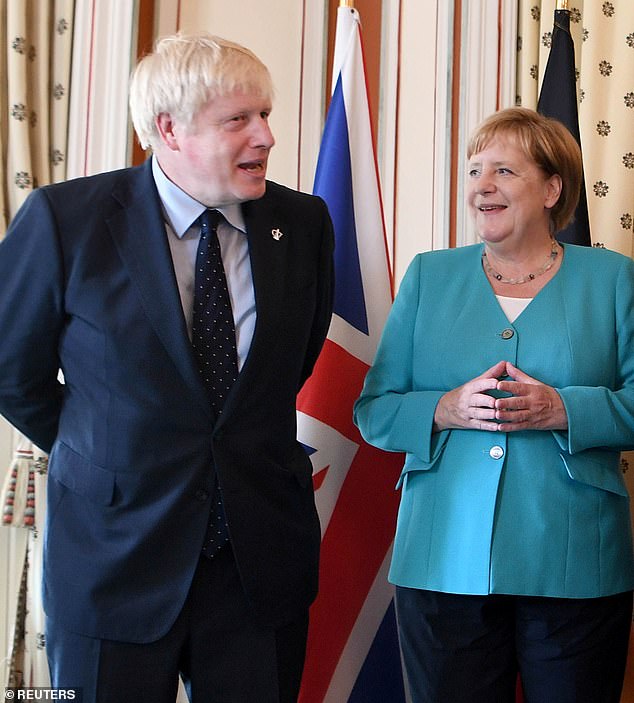 But Merkel still needs facts, and the German Government, as well as the rest of the EU, are waiting for concrete proposals from Johnson

However, the meeting also concluded that Brussels had enjoyed ‘constructive’ meetings with David Frost, Mr Johnson’s chief negotiator for exiting the EU. The fact that Mr Frost had travelled to Brussels to meet the Commission last week was seen as ‘a positive sign’.

Ms Merkel’s officials made clear in the meeting that there could be no new position from the EU until there was a fresh proposal from the UK, although the British officials noted: ‘It is very clear [from the EU] that cancelling the backstop is not possible, but they seem open to discuss further measures.’

It added: ‘No major breakthrough is expected before the European Council on October 17.’

The German officials also said that, with EU member states meeting in the coming days to discuss ‘preparedness levels’ for a No Deal Brexit, they were expecting ‘updates on preparedness directives’ from the European Commission in coming weeks.

Meanwhile, the French authorities will this week start a month-long ‘No Deal trial’ at Calais, which senior Cabinet Minister Michael Gove is expected to witness.

The trial will simulate ‘No Deal checks’ and new paperwork regimes. A source involved in the preparations said the French government had been conscious that they had halted their preparations after former Prime Minister Theresa May cancelled the UK’s original exit day in March.

‘The French are starting to ramp it up again now,’ said the source. ‘They feel that they have planned for more or less every eventuality, but have concluded that they can’t mitigate every risk.’