A Jeremy Corbyn ally today admitted the government cannot afford to bow to union demands for an inflation-busting five per cent pay rise.

The Labour leader has hinted he would dish out the major public sector pay hike – estimated to cost around £9billion – if he becomes Prime Minister.

But his shadow education secretary Angela Rayner today admitted Labour ‘cannot’ afford to meet the demand and must be ‘responsible’ and admit it.

She told the BBC Radio 4’s Today Programme it will ‘take longer than I would personally like’ to find the cash to meet the demands of funding the public sector.

She said: ‘We’re a government in waiting; the Conservatives would like you to think that we’re talking about a magic money tree and promising things we can’t deliver.

‘We’ve set out quite clearly that we would like to give – we’d love to give public sector workers a five per cent pay rise but we cannot do that at the moment.

‘What we’ve said is we will make sure that they get an inflation pay rise which is more than what this Conservative Government have done.’

She added: ‘We can’t undo the damage that the Conservatives have done to our public sector for years and years but what we will do is reverse some of that and start putting us on the right path.

‘But it’ll take longer than I would personally like to see, but we have to be responsible about that and that is what Jeremy Corbyn is going to set out in his speech about responsible government, about making sure we are investing in our future and that we have a credible plan to do that.’

Her comments come as the Labour leader prepares to address his party faithful at his conference in Brighton today.

The remarks are likely to infuriate the union barons who have threatened to mount a wave of illegal strikes this winter to force employers to meet their demands. 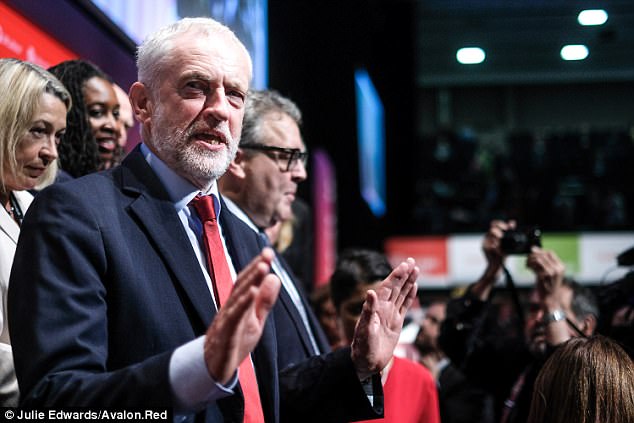 Jeremy Corbyn, pictured yesterday at the Labour Party conference, hinted to his  union allies that he would find the cash to meet their 5% pay demands

And it comes less than a month after the Labour leader hinted to the TUC conference that he would back their inflation-busting pay demands.

Speaking after union chiefs lined up to demand a five per cent pay rise, Mr Corbyn told them: ‘A pay cut is a pay cut and we must be united in breaking the pay cap for all workers.

‘So let me be absolutely clear today. The Labour Party totally rejects the Tories’ attempt at divide and rule, to play one sector off against another.

‘A Labour government will end the public sector pay cap and give all workers the pay rise they deserve and so desperately need.’

The government has scrapped the one per cent public sector pay cap by giving police and prison officers a bigger rise.

Police officers are set to be handed 2 per cent extra this year and prison staff 1.7 per cent. Other workers are set to pay increases from 2018/19 subject to negotiations with the Treasury. 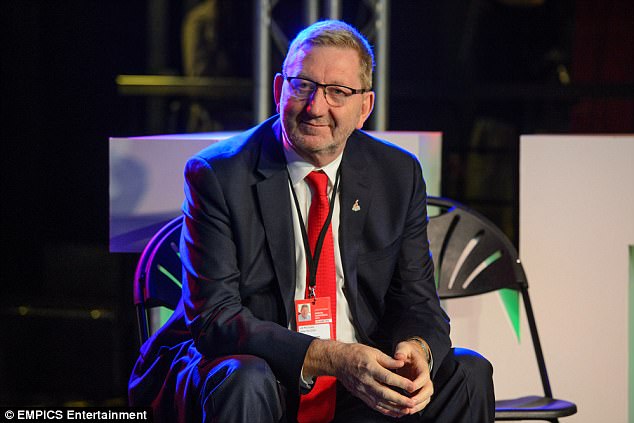 Unite leader Len McCluskey, a close ally of Jeremy Corbyn and pictured at Labour Party conference on Monday, has threatened to flout the law and unleash a wave of strikes this winter

But union barons have demanded pay rises of more than double that.

Len McCluskey, the powerful leader of the Unite union and a close ally of the Labour leader, said it is ‘likely’ unions will flout official rules to lead their members out on to the picket line.

He said unions will consider mounting strikes in support of each others pay demands to pile pressure on bosses to yield.

The Labour leader will today set out his vision for a far-left society as he delivers his conference speech in Brighton today.

He will hint at fresh taxes on firms that replace people with robots as he calls for a ‘new settlement between work and leisure’.

The Labour leader will use his set piece party conference speech to say that, with automation due to destroy millions of jobs in the coming decades, the state needs to intervene to ensure the benefits are shared across society.

‘We need urgently to face the challenge of automation; robotics that could make so much of contemporary work redundant,’ he will say.

‘That is a threat in the hands of the greedy but what an opportunity if it’s managed in the interests of society as a whole.

‘If planned and managed properly, accelerated technological change can be the gateway for a new settlement between work and leisure, a springboard for creativity and culture, making technology our servant and not our master at long last.’