A student who endured years of bullying that saw her veer between vastly overweight and the brink of an eating disorder finally has a healthy relationship with her body – and says she’s now grateful to her tormentors.

Her unhappy school years saw Angelina Denk, 23, from Eitorf in Germany, embark on a pattern of yo-yo dieting, and at one point she tipped the scales at 18st 13lb.

A cruel remark about her ‘big thighs’ from a relative saw Angelina go on to lose eleven stone in two years – but she reached a point where she was ‘too skinny’, and existing on a dangerously restricted diet.

Now Angelina is happy at 11st after discovering Crossfit and is even pursuing a modelling career, and says she’s ‘thankful’ to her bullies for ‘shaping’ who she is.

German student Angelina Denk, now 23, was bullied for years as a teen because of her weight 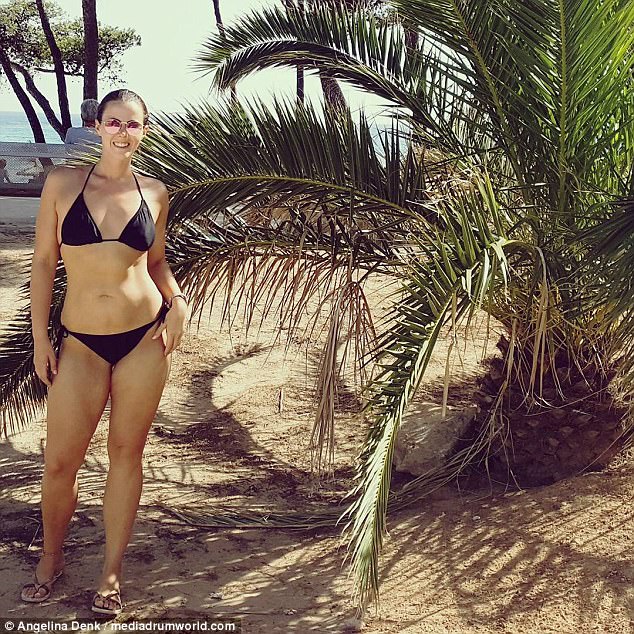 She now says she’s ‘grateful’ to her tormentors, after shedding some 11 st in two years

‘During school time, let’s say from age 12 until 18 people used to bully me, saying bad things and all that stuff,’ Angelina said.

‘But I’m forgiving and I’m thankful to them, because they shaped me.

‘I was always the tallest and biggest size girl compared to girls the same age as me,’ she said.

‘There is one time I remember the most. One boy in my school stabbed a pencil in my belly very hard and told me “it can’t hurt” because I’m fat.

‘There was a time when I hated to go to school because I knew people were talking about me behind my back. 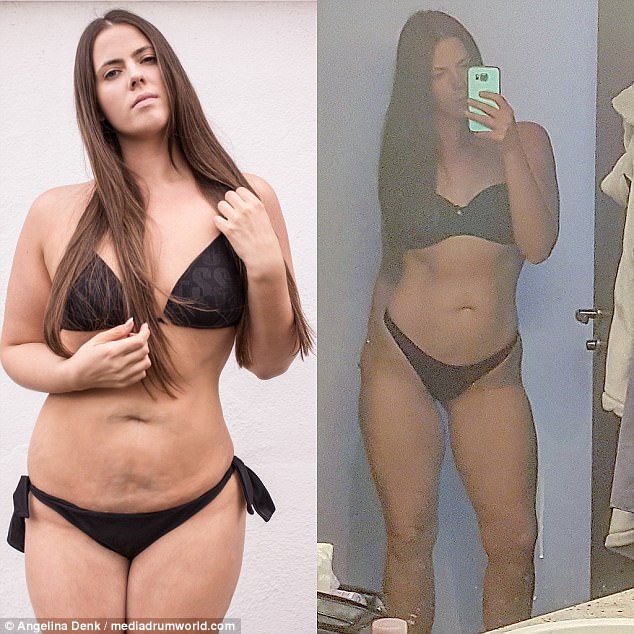 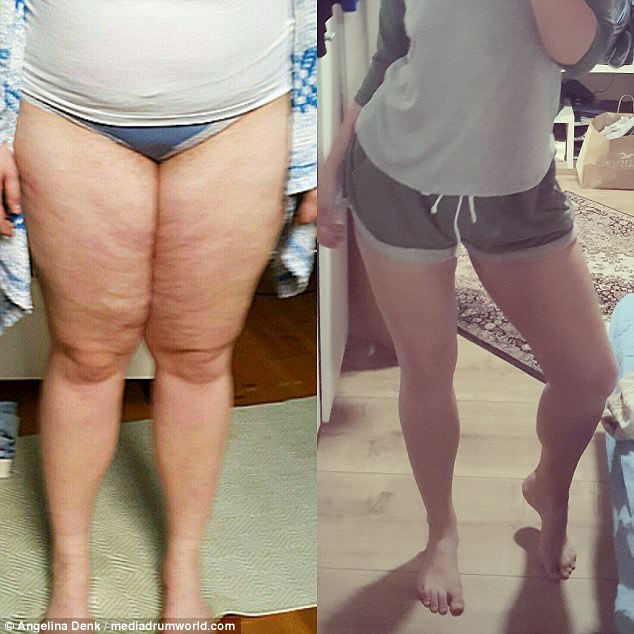 When a relative made a remark about Angelina’s ‘big thighs’, it was a turning point, she says

Angelina explained that, having reached her heaviest two years ago, her grandmother’s remarks about her thighs saw her resolve to take a fresh approach to her lifestyle.

‘I was on vacation with my parents, siblings and my grandma and she kept on telling me how big my thighs are and I started thinking about which kind of sports I could start to lose some weight and where.

‘I lost about six-stone four pounds some years ago, but it was only about counting calories, ending up into not eating anything. 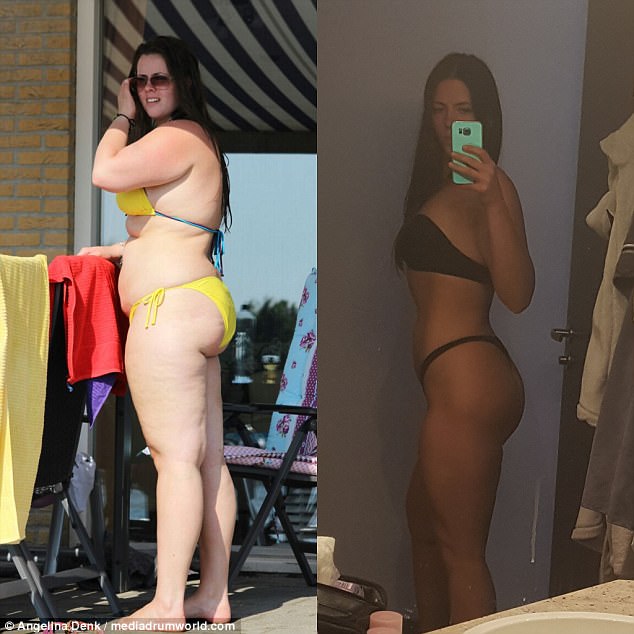 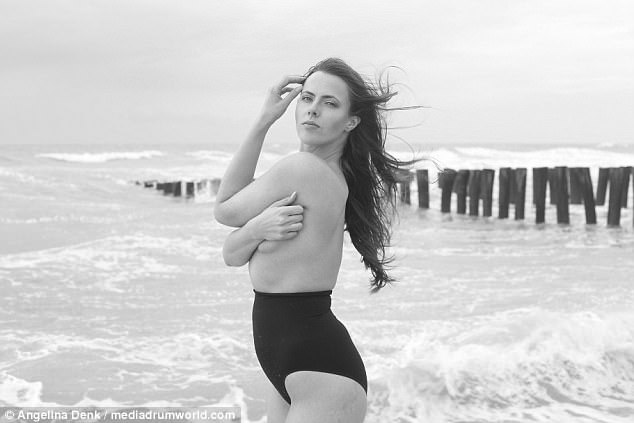 She says that despite the pain of her school years, she is grateful to her bullies in hindsight 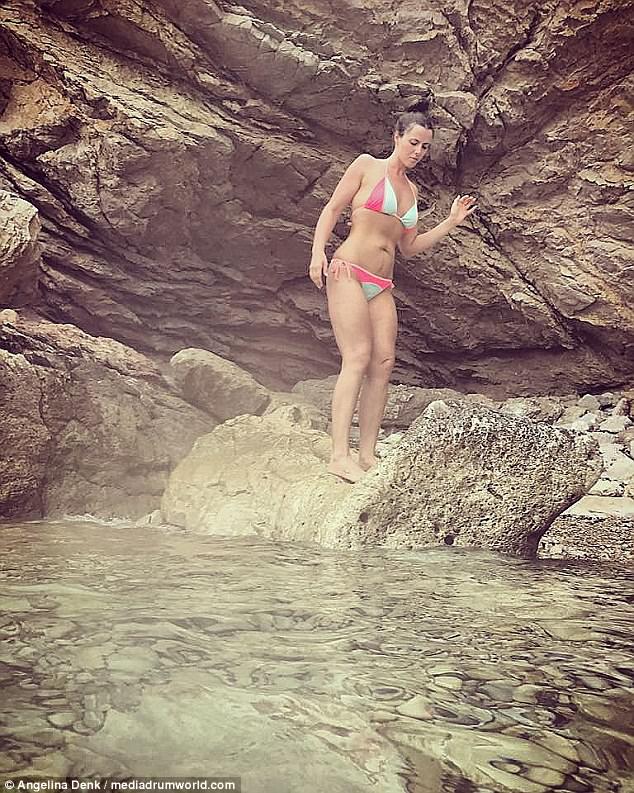 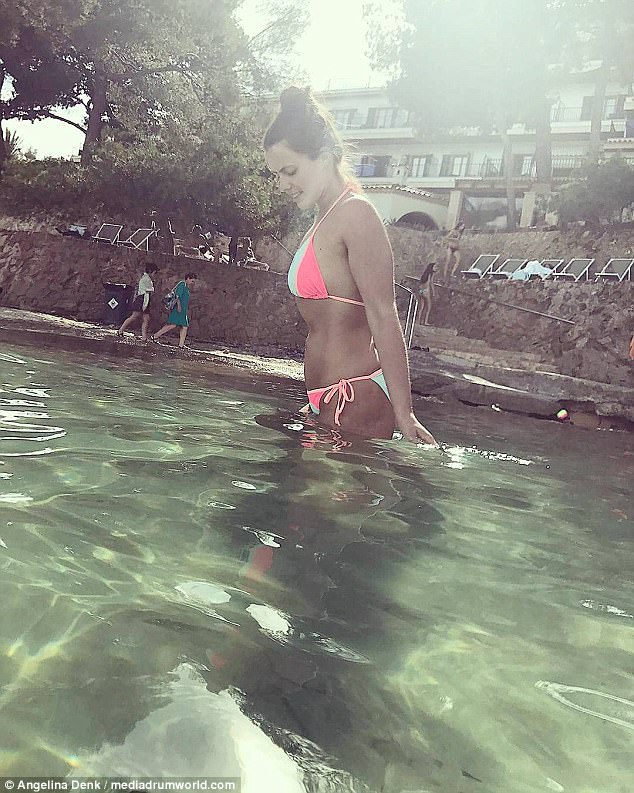 At one point Angelina was battling an eating disorder, but now embraces her curves

‘I was not thin like now, but I slipped into an eating disorder due to not eating anything. I was so much into it; food was my worst enemy. I was not feeling well and not at all happy.

‘So, after I started eating again, I gained everything back and I reached my heaviest weight by losing weight in an unhealthy way,’ she said.

‘I was inspired by my own body as I started working out; seeing results week by week. I was overwhelmed by how my body was transforming and what my body is capable of.

Since this time Angelina has appeared on a German television show called Curvy Supermodels, which has a similar format to Germany’s Next Top Model, but is aimed at plus size beauties.

‘I was in the Top 30 from over thousands of candidates,’ she said.

‘It was a great experience and I want to be the best version of myself and want to inspire and motivate people.

‘I have received big compliments from the judges such as Carlo Castro and Peyman Amin, who have said that they could see me on the covers of magazines like Sports Illustrated or Vogue.’

Angelina is now a fan of Crossfit and eats balanced meals at regular times.

‘I have two meals a day; one at around four to five o’clock in the afternoon and the second one at around nine to ten in the evening,’ she said.

‘My first weight loss was because of today’s society. I wanted to look like those models on the TV and I thought that I can reach that size only by not eating anything.

‘I feel much better now because I know the difference between my feelings now; I was never thinking I’m not beautiful or worth less than someone thinner.

‘Nowadays, the fashion industry is changing and you see more plus size models on the runways and in magazines, but not yet ‘inbetweenie-models’ like a healthy size eight to 10 (European size 36 to 38).

‘I would love to take part in that change; showing real human bodies and personalities living a healthy and happy life and not photoshopping everything.

‘I know I will never be a size zero model or a plus size model; I am who I am and that’s just perfect.’

She said she’d encourage other women who struggle with their weight to change for themselves, and noone else.

‘Do it for yourself and never give up. If you work on yourself; you can become whatever you want, and of’ course you can make your dreams come true,’ she said.

‘Bear with yourself. Everybody is different and you will transform in your own way.