Shortly after she made her breast and ovarian cancer battle public, actress Angelina Jolie was credited with increasing awareness amongst women of the importance of screening.

The phenomenon was dubbed in the media as ‘the Angelina Jolie effect’.

However, new research suggests the US star’s call for action has fallen on deaf ears with those most at risk.

More than 80 percent of women with a history of breast cancer and ovarian cancer have not taken the test or even discussed it with a health care provider.

In May 2013, Angelina had preventive surgery to remove both breasts after discovering she carries a genetic mutation that dramatically increases the chance of being diagnosed with potentially fatal breast cancer.

There are nearly 4 million women in the US who have had either breast cancer or ovarian cancer.

At least 1.5 million of these have a high risk of carrying genetic mutations that could increase their chances of having additional cancers in the future, according to experts from the University of California, Los Angeles (UCLA) Fielding School of Public Health.

Their study findings suggest 1.2 million to 1.3 million of this at-risk group have not considered testing, even though it involves a simple saliva or blood sample.

‘Many of these women have inherited genetic changes that put them and their family members at risk for future cancers,’ said Dr Christopher Childers, the study’s lead author.

‘Identifying a mutation is often important for surgical decision-making and cancer therapy, but its importance extends further than that. If individuals are aware that they have these mutations, they can take steps to lower their future cancer risk.’

In the study, published in the Journal of Clinical Oncology, the researchers examined data on 47,218 women over a 10-year-period from 2005.

They were classified as at risk of carrying a faulty gene if they had been diagnosed with ovarian cancer. 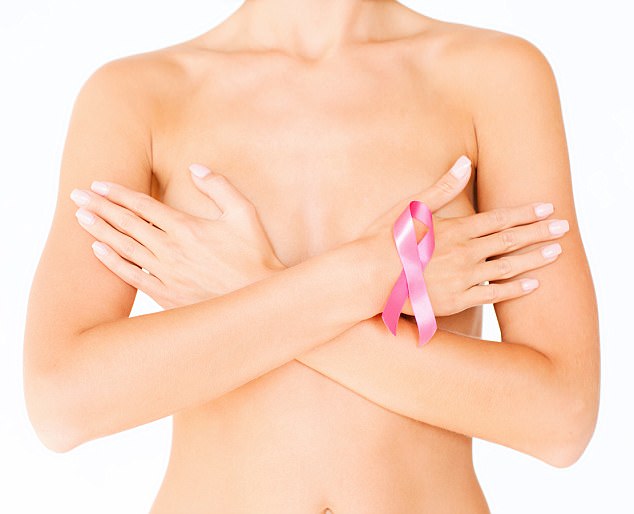 WHAT IS THE ANGELINA GENE?

Hollywood actress Angelina Jolie announced that she had a voluntary double mastectomy in May 2013.

Jolie took the decision after discovering she had an 87 per cent chance of developing breast cancer.

This was due to her having inherited the faulty BRCA1 gene, which increases the risk of both breast and ovarian cancer.

This same mutation led to her mother’s death at age 56.

BRCA1 and BRCA2 are two genes that are important to fighting cancer. They are tumor suppressor genes.

When they work normally, these genes help keep breast, ovarian, and other types of cells from growing and dividing too rapidly or in an uncontrolled way.

Sometimes a change or mutation occurs in the BRCA genes that prevent them from working normally.

Women who inherit the faulty, or mutated, BRCA1 or BRCA2 genes have a 50 to 80 per cent chance of developing breast cancer during their lifetime.

Figures suggest that around one in 400 women have such genetic twists.

Those who had breast cancer and who had a close relative who had it when they were 50 or younger could carry the gene.

And those who had breast cancer and a close relation who has had ovarian cancer were also classed as at risk.

Of all the women reviewed, nearly 3 percent had had breast cancer. Among those who met at least one of these four criteria, just 29 percent had discussed the genetic test with a health care provider.

The researchers found that just over 20 percent were advised to undergo the test, and only 15 percent had taken it.

Under 1 percent of women in the survey had had ovarian cancer. Of them, only 15 percent discussed the genetic test with a health care provider, 13 percent were advised to undergo the test and just over 10 percent had taken it.

‘Many women are not receiving vital information that can aid with cancer prevention and early detection for them and their family,’ said co-author Kimberly Childers, a genetic counselor and regional manager of the Providence Health and Services Southern California’s clinical genetics and genomics program.

‘Thus, we have identified an incredible unmet need for genetic testing across the country.’

The researchers suggest that genetic counselors are unevenly distributed throughout the country.

‘Also, when women change doctors, their new physicians may not be aware of their histories or of the new eligibility guidelines,’ said Professor James Macinko, the study’s senior author