These shocking images show 64-year-old man whose poor health meant his weight plummeted to six stone – but despite this he has been deemed fit to work.

The pictures of Stephen Smith, of Liverpool, Merseyside were taken when he was in hospital over Christmas when he was unable to stand.

Despite his condition and history of serious health problems, Stephen was forced to leave hospital so he could fight a decision by the Department of Work and Pensions (DWP) –  which stated he was fit and capable of finding work.

But Stephen managed to win the appeal after a tribunal judge ruled that Mr Smith can barely walk down the street let alone hold down a job.

This  came despite written evidence from doctors stating that he couldn’t walk for 20 metres without collapsing with pain and exhaustion.

Despite his condition and history of serious health problems, Stephen was forced to get a pass out of hospital so he could fight a decision by the Department of Work and Pensions (DWP) – which stated he was fit and capable of finding work

His most debilitating illness is Chronic Obstructive Pulmonary Disease, an incurable respiratory problem.

But he also suffers with excruciating Osteoarthritis, has an enlarged prostate and uses a colostomy bag to go to the toilet.

Despite all of this, the 64-year-old failed a DWP work capability assesment in 2017 – which meant his ESA payments were stopped and he was told to sign on for a £67 a week Jobseeker’s Allowance, visit the job centre once a week and prove he was looking for work.

Throughout this period, Stephen was living alone and didn’t know where to turn as his health deteriorated.

Speaking to the Liverpool Echo, he said: ‘I could only make it to the kitchen to make food once a day.

‘I had no muscles in the back of my leg which meant I couldn’t stand up at all – and had to lean or sit down all the time – but they were telling me I was fit for work.’

Stephen believes he could have died if it wasn’t for two men, Tony Nelson and Terry Craven.

Tony runs the CASA community centre in Hope Street which offers support to people who don’t know where to turn. 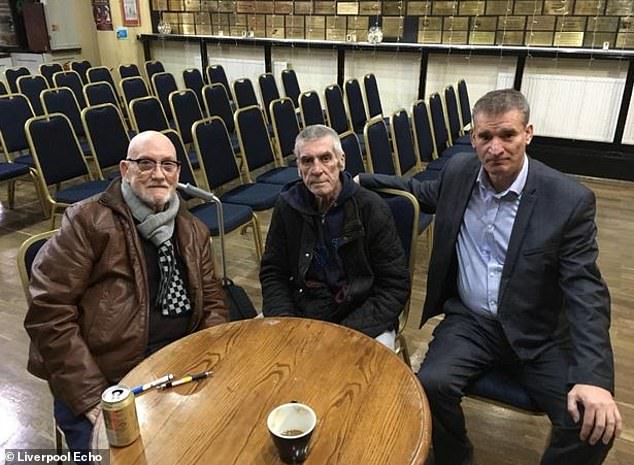 After Stephen was kicked off ESA, Terry took up his case and battled with the DWP to get him the benefits he knew he deserved.

This included sending the opinions of two separate doctors who both confirmed the ‘significant difficulty’ and pain experienced by Mr Smith when completing simple movements and daily activities.

One doctor’s note stated: ‘It is my opinion that Mr Smith could not walk 20 metres without pain or exhaustion.’

But despite this, in January last year, Mr Smith’s appeal was rejected by the DWP who told him that he hadn’t scored the required number of points to deem him as having ‘limited capability for work’.

But Stephen and Terry continued to battle over the next year and eventually were granted the chance to fight the decision in a tribunal earlier this month – 12 months on from that DWP rejection.

But that date almost came too late for Stephen who had been struggling to look after himself and suffering from deteriorating health in the intervening period.

Terry said: ‘Around December time me and my wife went to check in on him and my wife said ‘if we don’t do something now, he’s not long for this world’.’

Stephen was now suffering from pneumonia and was taken to hospital which was when the shocking images of his dramatic weight loss and poor condition were taken.

And it was during this stay in hospital that Stephen was forced to get a pass to allow him to leave the Royal and head to the tribunal to fight his case.

He won it – with the judge stating that his mobility and health problems meant he satisfied the requirement for ESA.

The ruling means Stephen will be put back on to ESA but Terry believes he is owed around £4,000 in backpay.

He said Stephen’s case, while alarming, is not uncommon at present.

He said: ‘I have got lots of cases like Steve’s – I have a client at the moment who is actually on dialysis and has been thrown off benefits

And Stephen himself knows how different things could have been without Terry, Tony and the CASA.

He said: ‘Without them and this place I probably wouldn’t be here today – I had nowhere to turn- they have saved my life.’

To find out more about the CASA and the work being done to support people in Liverpool click here.

In a statement a spokesperson for the DWP claimed Mr Smith has ‘continued to receive all of the benefits he was entitled to, as well as offers of personal support to improve his skills and health issues’.

She added: ‘He has now been reassessed, reflecting his changing condition  and will be receiving full ESA support.

‘We’re committed to ensuring that people with health conditions get the support they’re entitled to.

‘Decisions for ESA are made following consideration of all the information provided by the claimant, including supporting evidence from their GP or medical specialist. Any claimant can appeal a decision for free to an independent tribunal.’