Angkor Wat was had up to 900,000 inhabitants before being abandoned in 1431 AD, study suggests

Unravelling the mystery of just how BIG Angkor Wat was: Ancient capital in Cambodia had up to 900,000 inhabitants before being abandoned in 1431 AD, study suggests

The ancient Cambodian capital of Angkor Wat, had a staggering 900,000 inhabitants before it was abandoned in 1431, according to a new study.

An international team, led by the University of British Columbia, examined three decades of data to create a demographic model of the Medieval city.

Their model revealed that the capital of the long-gone Khmer Empire housed between 700,000 and 900,000 people during its zenith in the 13th century.

According to the researchers this made it one of the largest premodern cities int he world, built up over several centuries of growth at different rates.

The ancient Cambodian capital of Angkor Wat, had a staggering 900,000 inhabitants before it was abandoned in 1431, according to a new study 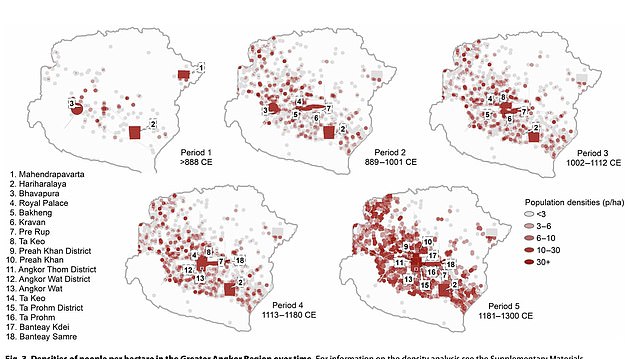 Densities of people per hectare in the Greater Angkor Region over time, peaking in the 13th century

The findings leverage more than 30 years of data to create the first model of demographic growth in this capital of the Khmer Empire.

Sarah Klassen and colleagues suggest that this technique for modelling urban centre growth may be applied to other premodern cities.

They say this could offer answers to some of archaeology’s greatest challenges, including the rise and decline of social complexity.

The question of Angkor’s demographic growth has been a source of persistent speculation and controversy since the start of modern scholarship in the region. 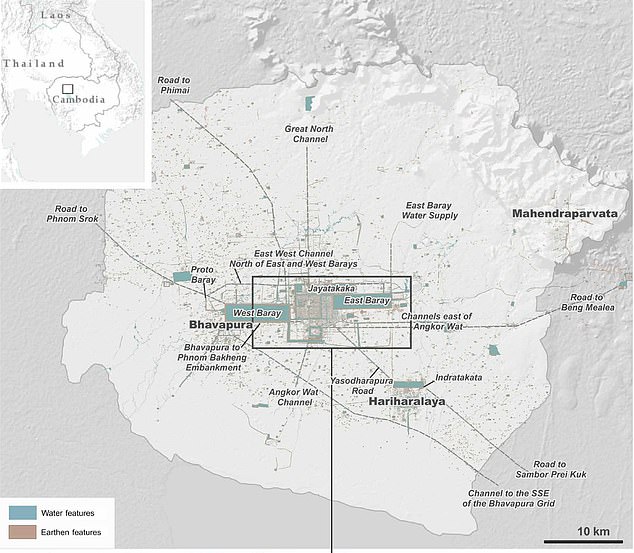 This is an archaeological map of the Greater Angkor Region. According to the researchers this made it one of the largest premodern cities int he world, built up over several centuries of growth at different rates

In the mid-19th century, the French naturalist Henri Mouhot, who provided one of the first detailed accounts of Angkor for European audiences, cites an oral tradition that the Khmer Empire “kept up an army of five or six million soldiers”.

The first reasonably systematic attempt to calculate the population of Angkor was undertaken by archaeologist Bernard-Philippe Groslier.

He cautiously suggested a total population of 1.9 million in a region around Angkor in the last half of the 12th century.

More recent attempts based on the carrying capacity of the landscape estimate have estimated a population of approximately 750,000 people. 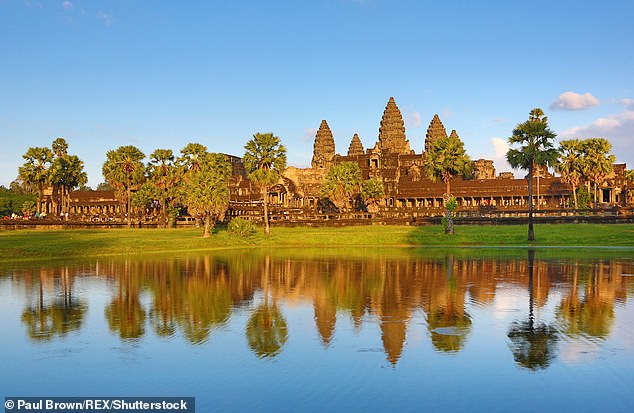 Angkor, the ancient capital of the Khmer empire, suffered a gradual decline, a new study suggests.

The abandonment of Angkor has long puzzled archaeologists and historians, with many attributing it to the 1431 AD invasion by Thai forces.

But a slow and prolonged exodus of its inhabitants has been found dating back to the start of the 14th-Century.

A decline in human activity on the land over a few decades was discovered by scientists who examined soil and sediment in the region.

Until now, no comprehensive demographic study of Angkor had ever been completed, since the city’s nonreligious architectural structures were made from organic materials that decayed long ago.

This rendered conventional population size and density estimation methods impossible, according to Klassen and colleagues.

To overcome this challenge they combined decades of archaeological excavation data, historical archives and maps, recent lidar assessments, and several machine learning algorithms to create maps that model the city’s growth through time.

The researchers found that it may have taken several centuries for Angkor’s population to reach its peak, with growth occurring at different rates in its three occupation zones.

These included the civic-ceremonial centre, where the royal residence and large stone temples were located, the metropolitan area, and the embankments.

By comparing Angkor’s growth with other preindustrial tropical and subtropical urban centres, the researchers determined that its range of metropolitan urban area densities was much lower than those of the Mayan city of Caracol.

Yet its civic-ceremonial centre densities were comparable to those of Teotihuacan  in what is now Mexico or Anyang in China.

The findings have been published in the journal Science Advances.

THE RAMBLING COMPLEX OF ANGKOR WAT

The temple complex lies 3.4 miles (5.5km) north of the town of Siem Reap in Cambodia. The region contains the remains of the different capitals of the Khmer Empire, dating from the 9th to the 15th centuries.

The Angkor Wat temple was built by the Khmer King Suryavarman II in the early 12th century.

Wat is the Khmer word for temple. It was built as a Hindu place of worship but in 1432, when the capital moved to Phnom Penh, Angkor Wat was maintained by Buddhist monks.

Although Angkor Wat appears, at first glance, to be a mass of stone with a central causeway, it actually consists of a series of elevated towers and covered galleries on different levels connected by stairs.

The galleries and its columns set the boundaries for the first and second levels, while the third level supports five towers – one in each corner, and one in the centre.

Each tower features graduated tiers that create a cone shape, and the highest tower within the temple complex is 699ft (213m).

The outer gallery of the temple contains bas-reliefs that stretch for almost 1,960ft (600m), including the Ramayana gallery in the western section.

It is thought Angkor Wat was built as funerary temple for King Suryavarman II facing the west towards the setting sun – a symbol for death.

The bas-reliefs were designed to be viewed from left to right in the order of a Hindu funeral ritual, and this supports the funerary claims.

Angkor Wat is said to be a ‘miniature replica of the universe in stone’ and represents an earthly model of the cosmic world.