This keen angler was not going to let a snapped line get in the way of his prize catch as he dived off his kayak into shark-infested waters to wrestle the fish to one side.

Seth Willoughby splashed around in the waters off the coast of Fort Lauderdale, Florida, to make sure the large sailfish he’d hooked didn’t get away.

Mr Willoughby, from Pennsylvania, had travelled to the area specifically to catch a sailfish, and after a 15-minute fight, he thought he had his roughly six-foot-long catch.

A six foot sailfish skips along the surface of the water as angler Seb Willoughby reels it in to his kayak in Fort Lauderdale, Florida

But as the dramatic footage shows, when the angler attempted to pull the giant fish into his kayak, he mistakenly grabbed the line rather than the fish’s bill, causing the line to snap.

With no hesitation, Mr Willoughby dived off the side of his kayak, grabbing the sailfish by the tail.

But in the waters, he was also surrounded by a seven-foot sandbar shark and two remoras, but fortunately for the angler, both swam away. 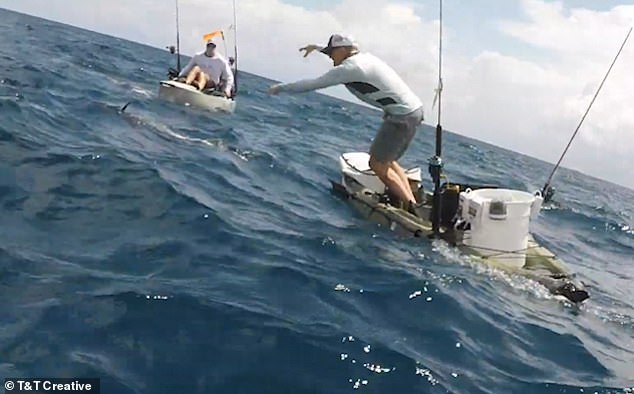 Just as Mr Willoughby was about to bring the sailfish on to his boat, the line snapped and he immediately jumped into the water to salvage his catch 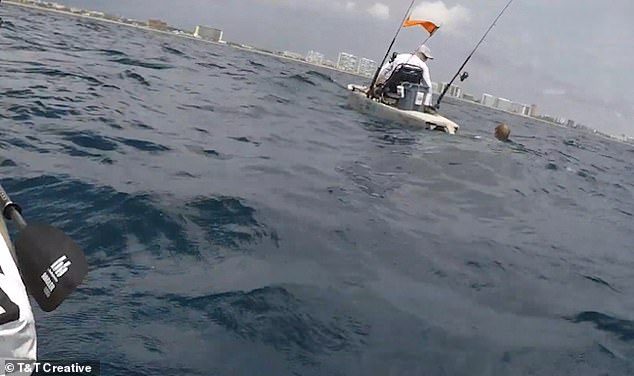 Having dragged the sailfish to his friend’s kayak, pictures were taken before Mr Willoughby let the sailfish go amidst shouts to warn him about the nearby shark.

The fisherman, who works for Fishing Online, encourages fellow anglers to always wear a personal flotation device when kayak fishing.

Sailfish are known for their unusual dorsal fin which resembles a sail as well as their elongated bill like that of a swordfish.

They can grow up to ten feet in length and weigh up to 200 lb and are found in the colder waters of the Atlantic Ocean. 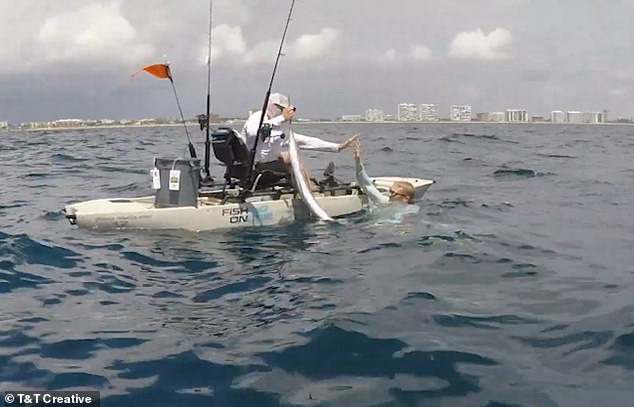 Fortunately, Mr Willoughby safely retrieved the impressive fish and took a photo with his catch before releasing it back into the sea