Five days into the partial government shutdown sparked by the standoff between President Donald Trump and congressional Democrats over border wall funding, furloughed employees took to Twitter to vent their frustration.

Using the hashtag #ShutdownStories, many infuriated and anxious federal workers described their financial woes caused by the shutdown this holiday season.

It appears that some commenters were moved to share their stories after hearing Trump say on national television the day before that federal workers support the shutdown and want the wall.

Former New York US attorney Preet Bharara quipped that the pro-shutdown federal employees Trump was speaking of were the same 114-year-old parents of veteran of the Korean War, which ended 65 years ago, that he claimed last summer had reached out to him before his historic meeting with North Korea’s Kim Jong Un 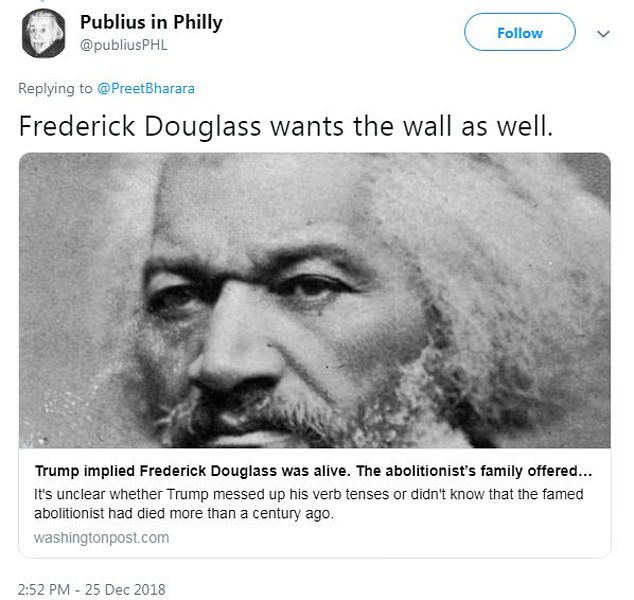 The president made those remarks after delivering his annual Christmas Day address to the armed forces.

When asked by a reporter what he wanted to say to 800,000 employees of the federal government affected by the shutdown, Trump replied: ‘Well, I think they understand what’s happening. They want border security. It’s not a question of me. I’d rather not be doing shutdown.’

After complaining that he was not spending the holiday with his family at Mar-a-Lago, Trump went on: ‘Many of those workers have said to me and communicated, “stay out until you get funding for the wall.” These federal workers want the wall. 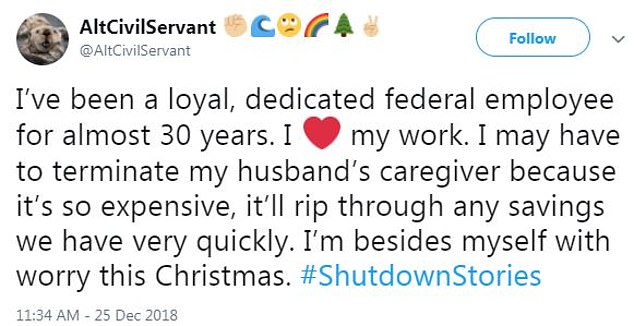 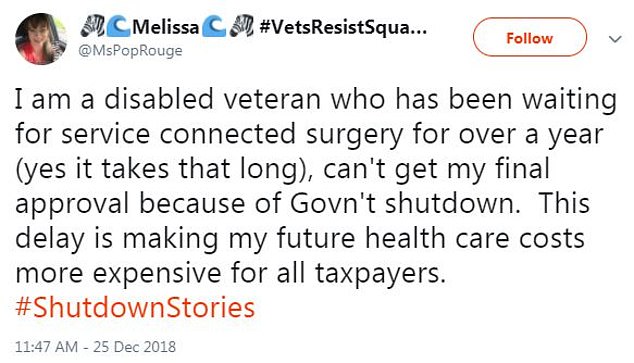 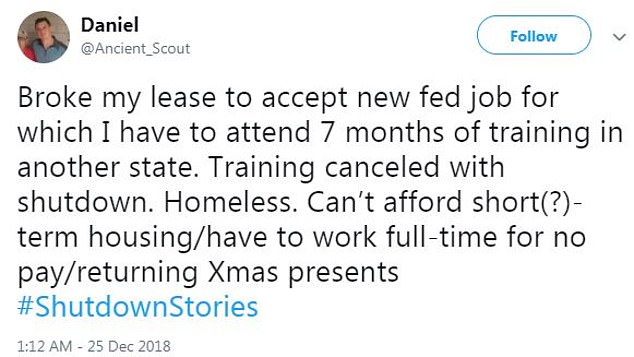 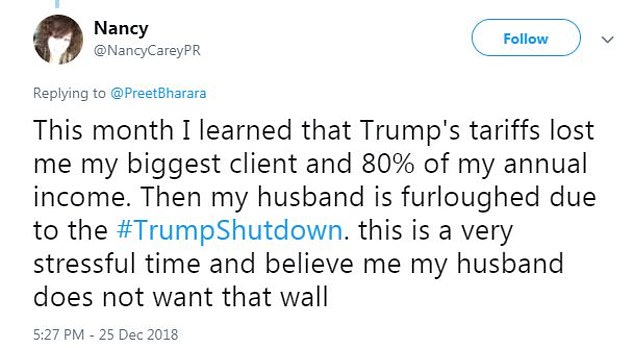 ‘The only one that doesn’t want the wall are the Democrats because they don’t mind open borders, but open borders mean massive amounts of crime.’

Federal employees and their families have been tweeting about their struggles since the beginning of the shutdown, which went into effect Saturday morning, but Trump’s statement on Tuesday caused Twitter to explode with messages of outrage.

Former New York US attorney Preet Bharara quipped that the pro-shutdown federal employees Trump was speaking of were the same 114-year-old parents of veteran of the Korean War, which ended 65 years ago, that he claimed last summer had reached out to him before his historic meeting with North Korea’s Kim Jong Un.

Another wit joked that the legendary 19th century abolitionist Frederick Douglass also wants the wall. Last year, Trump implied that the long-dead historical figure was still alive by saying that Douglass ‘has done an amazing job.’

But most of the messages shared with the #ShutdownStories hashtag were nothing if not heart-rending. 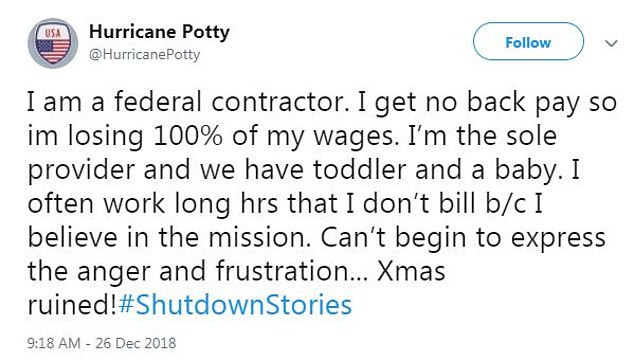 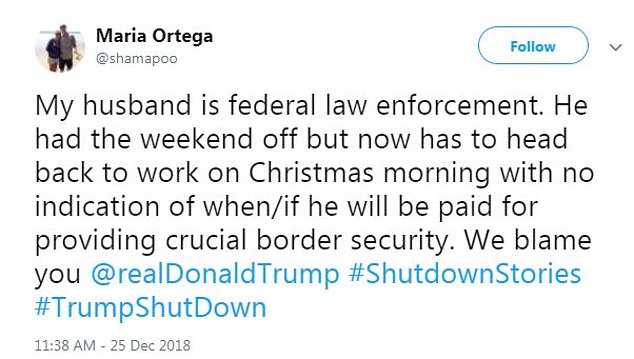 One user wrote: ‘In last year of my PhD, a husband and father of a 1 year old. I have a government funded fellowship and the government shutdown jeopardizes my ability to pay rent, support my family, and continue my research. My story is not unique, but wholly American in 2019.’

Another told a similar tale: ‘I am a federal contractor. I get no back pay so im losing 100% of my wages. I’m the sole provider and we have toddler and a baby. I often work long hrs that I don’t bill b/c I believe in the mission. Can’t begin to express the anger and frustration… Xmas ruined!’

A woman describing herself as a dedicated federal worker of nearly 30 years tweeted that because of the shutdown, she might have to let her ailing husband’s caregiver go because they won’t be able to afford the service.

She added: ‘I’m besides myself with worry this Christmas.’ 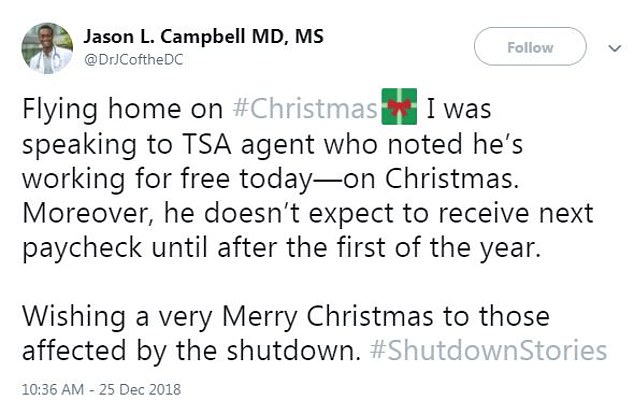 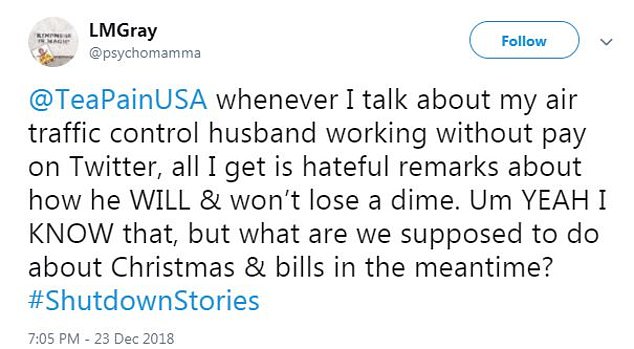 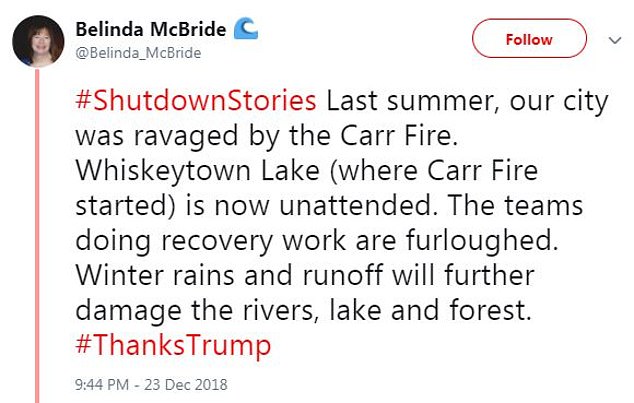 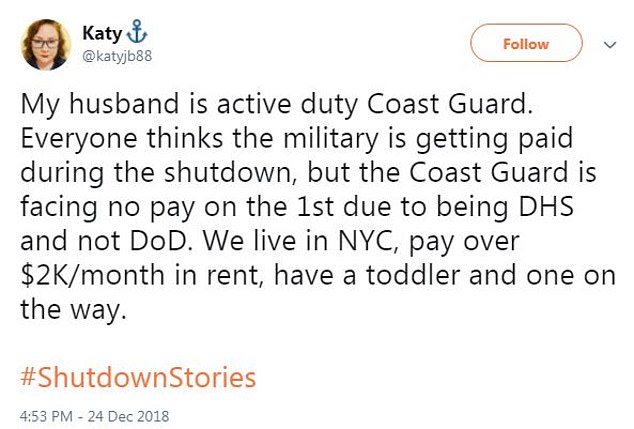 A newly hired federal worker revealed that the shutdown canceled a seven-month job training program, for which he had moved to another state, leaving him homeless.

The mother of a federal employee lamented that she will be supporting her daughter and grandchildren financially through January, but if the shutdown continues past that time, she would have to dip into her retirement savings.

The wife of a US Forest Service said that she has been on unpaid maternity leave with their new baby since October, and now without her husband’s his income, they could be at risk of potentially losing their house.

‘I don’t know what we will do. We have enough in savings to cover the mortgage in January, but beyond that..’ the woman wrote in desperation.

A disabled veteran tweeted that she has been waiting to undergo surgery for over a year, but because of the shutdown, she cannot get her final approval for the procedure.