California’s favorite burger joint has come under fire after the restaurant donated $25,000 to the California Republican Party.

The donation was filed on Monday according to the California Secretary of State’s website, and has spurred turmoil among the restaurant’s fans.

The contribution was made ahead of midterm elections in Irvine, California, which is a part of Orange County – a Republican stronghold in the west coast.

In-N-Out Burger has sparked a boycott among its fans after the restaurant chain donated $25,000 to California’s GOP on Monday in a public filing

The donation was filed in Irvine in Orange County, a Republican stronghold in the state, on Monday

The news broke on Twitter with a post saying: ‘In-N-Out added a new item to their secret menu’ with a picture of the filing.

Now Twitter users are calling for a boycott of the popular fast-food chain, many refusing to support In-N-Out if they sponsor the GOP and the Trump administration as the state rolls towards midterm elections.

However, this isn’t the first time the burger joint has supported the Republican party.

‘This information will be painful to many of you, and you may act on it, or not, as your conscience demands,’ one user wrote. When the news was shared on Twitter, it sparked outrage and protest among restaurant-lovers

Et tu In-N-Out? Eric Bauman, Chair of the California Democratic Party, called for a boycott of the restaurant

However this isn’t the first time In-N-Out has supported the GOP, the chain also made hefty donations to California’s Republican party in 2016 and 2017 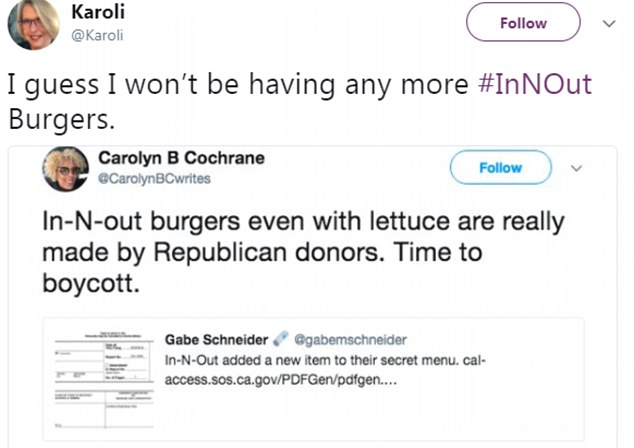 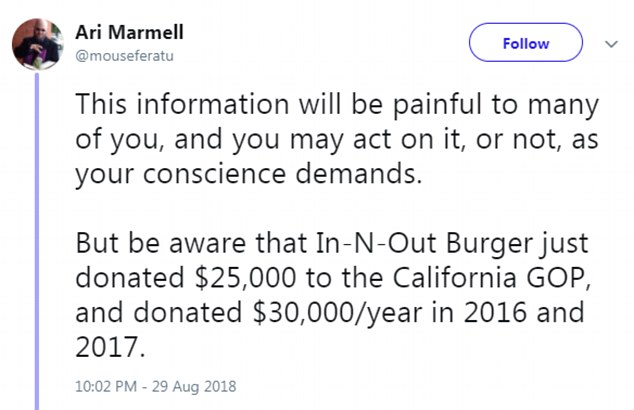 In-N-Out has donated to the California GOP in the past, their donation comes as midterm elections approach

Some users shamed the restaurant for their Republican support, claiming to refuse to return

Boycott! One user warned ‘no way do they get my money now’ following news of the filing

‘I guess I won’t be having any more #InNOut Burgers,’ another user wrote.

‘In N Out donated $25k to the Republican party, aka no more Animal Style Double Doubles for me,’ another fan echoed.

‘Phooey! I’ve enjoyed the convenience of the drive-thru 3 miles from my house, but no way do they get my money now. #BoycottInNOut,’ one Twitter fan wrote.

‘@innoutburger looks like my family and I will be boycotting your restaurants from now on. You donate to the @GOP, that means you stand with Trump and all his bigotry. #ShameOnYou! #BoycottInNOut’ one protester warned.

‘Yo, In N Out could give the California GOP $30 MILLION in contributions and I’ll still keep eating there. Republicans will never take back the state, no matter how many Double Doubles they sell,’ another Twitter user echoed.