‘How am I supposed to learn how to DIY?!’ Angry fans take to social media to complain as online scrapbook Pinterest goes down

The website, which allows users to bookmark craft ideas, outfits and recipes, was displaying an error message until early Saturday morning.

The message read ‘Something went wrong! Sorry. We’ve let our engineers know’ – but the problem appears to have since been resolved.

One user lamented that they couldn’t spend their Friday night completing their Halloween costume.

‘GeekishlyApropo’ said on Twitter: ‘Pinterest is down. But how am I supposed to learn how to DIY?!

‘I don’t know how to make bread or cut holes in a sheet to be a ghost for Halloween!’

Another said they would have to turn to Reddit instead to get their fill of social media browsing. 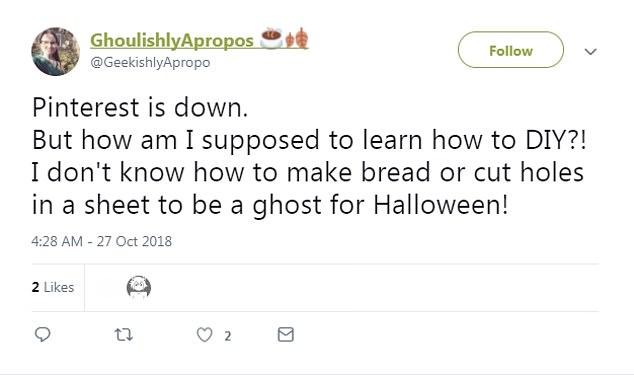 Neena K said: ‘Pinterest is down and the only other interesting social media I have is Reddit so I guess it’s time to up vote some cute dog videos.’

Brendan Simpson added: ‘Honestly, what do you do when Pinterest is down? I don’t know how to function.’

Pinterest has more than 250 million monthly active users as of October 2018, the Mirror reported.

The site was founded in March 2010 by Ben Silbermann, Paul Sciarra and Evan Sharp.