Former Collingwood coach Mick Malthouse has been asked to apologise for telling Magpies players to ‘take those Turks right out’ in an Anzac Day speech.

But the polarising AFL figure has denied he is being forced to say sorry.

The Herald Sun has reported that the Turkish Melbourne Consulate General has arranged to meet with Malthouse and Collingwood chief executive Mark Anderson on Wednesday so the former coach can make amends.

However, Malthouse told the publication no such meeting was going to take place and said he would ‘start talking facts’ if the reporter disclosed their sources.

Malthouse had been invited back to the club to deliver a pre-match speech to the players ahead of their Anzac Day clash against Essendon.

‘That opportunity, when it comes, you jump on that horse and you fire from the hip and you just take those Turks right out … [because] they’re coming at you,’ Malthouse told the group.

Those comments offended people in the Australian-Turkish community and led to calls for an apology from the former Pies mentor.

Oscar Yildiz, a councillor at Moreland City Council in Victoria and a born and raised Australian with a Turkish background, publicly spoke out against Malthouse’s speech.

‘I find these comments very insensitive and inappropriate,’ he said.

‘I’ve met and spoken to Mick Malthouse a few times, he’s a good man but seriously, Mick, what were you thinking?

‘If he came out and apologised as it probably was a slip of the tongue, I think all would be good.

‘Just not necessary, whatever was meant, no need, such comments aren’t cohesive but divisive.’

I’m more concerned about the cringeworthy Mick Malthouse address to the Collingwood players that they showed.

Mustafa Sahin is an Australian-born Turk and Collingwood supporter of 40 years. He penned a message to the Collingwood Football Club on their Facebook page.

‘I found it distasteful and offensive … poor choice of words. Could have said: “Fire at the enemy”. Would have been more appropriate. Why the need to add the word Turk?

‘Football is supposed to Unite and not divide. These words are divisive. I understand Mick is old school, but He should know better. We hope He can come forward and apologise for offending the Turkish community.

‘Think about how many young Turkish Australian children play Aussie Rules, and when they hear comments as divisive as this? Not a good look Mick.’ 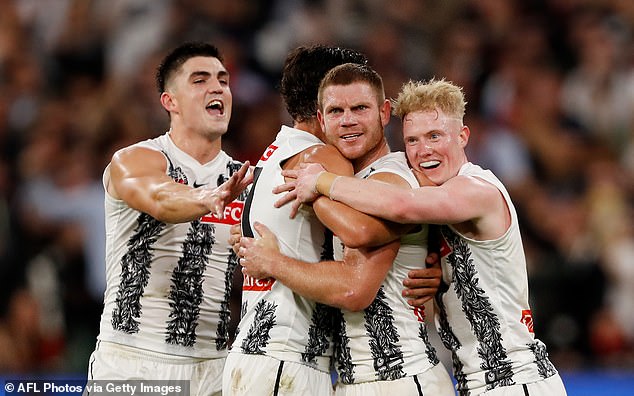 Malthouse coached Collingwood from 2000 to 2011, winning the 2010 premiership with the Pies.

He had a messy exit from the club and his Anzac Day speech was reported as the first time he’d returned to the fold for a decade.

However, ex-Magpies coach Nathan Buckley pointed to vision of Malthouse returning for champion Dane Swan’s retirement in 2016 as proof he was welcome at the club.

‘Perhaps the carpet wasn’t red enough, perhaps it wasn’t wide enough. But someone forgot about it. He’s been back. We’ve had open arms at Collingwood for awhile,’ he said.