An angry motorist left a sarcastic note for their driving instructor neighbour  – and was then offered driving lessons in response.

Gary Corbett was stunned when he spotted the note on his car in Bournemouth, Dorset, last Wednesday, which accused him of breaking the law by blocking a drive.

Gary disputes the claim, saying there was a 10ft gap his neighbour could manoeuvre through and he had legally parked against a drop kerb.

He wrote a note in response, which offered his neighbour driving lessons to help them park.

Gary Corbett was stunned when he spotted the note on his car last Wednesday which accused him of breaking the law by blocking their drive. Gary is pictured with his girlfriend  Yanee Janlaor

The note read: ‘I am a police officer and I will give you a ticket!

‘The law says you cannot block a driveway which you are doing because our second car cannot get on the drive with you there! Move!’

Gary’s response, which he placed on her car windscreen, read: ‘Dear ‘police officer’ there is no such law – only an advisory in the Highway Code.

‘I am a driving instructor and I will give you lessons if you cannot park a car.

‘You have plenty of space to access your drive – we aren’t on the drop kerb.’

Gary believes the woman who wrote the note is one of his neighbours.

He said the neighbour, who is a student, previously barged into the home he shares with his girlfriend Yanee Janlaor – demanding they move their silver Citroën Picasso.

Project manager Gary, 28, blasted the note writer as a ‘terrible cop’ who didn’t understand UK law and offered her driving lessons to help her get her vehicle onto the driveway. 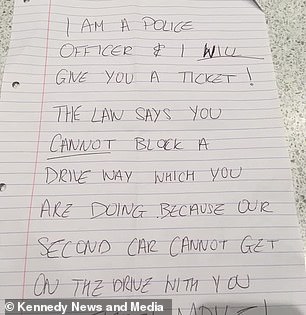 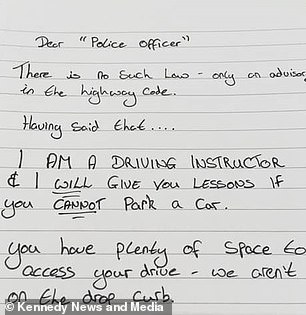 Gary who disputes the claim wrote a note in response which offered his neighbour driving lessons to help them park. The note is pictured, left, and Gary’s response is pictured on the right

Gary, from Bournemouth, said: ‘I don’t know for a fact she’s not a police officer, I’m just making an educated guess.

‘But if this has been left by a genuine cop then they’re not a very good one, plus they don’t normally let you know when you’re about to get a parking ticket – they just issue one.

‘I think the person who left the note is a woman who’s been a bit of a nuisance neighbour.

‘On one previous occasion I was in the shower and she let herself into the flat.

‘She came in through the main external door that had been left open by an upstairs neighbour and then walked into our living room demanding my partner move the car.

‘This time rather than knock on the door and have a row I decided to leave a little cheeky note back – I haven’t heard anything since.’

Gary and auxillary nurse girlfriend Yanee, live close to Bournemouth University in an area with a huge student population where spaces can be scarce.

He said the car had been parked legally against a raised kerb on Tuesday evening –  leaving ample space in front of their vehicle to allow those renting access to their double driveway.

It appears the driver wanted access from both the raised and dropped kerb. 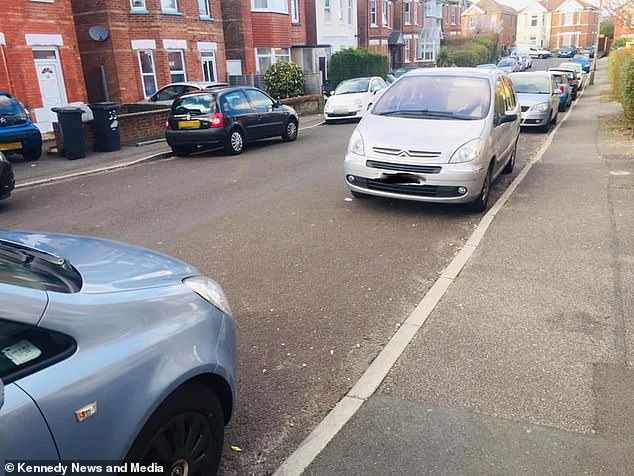 The following morning they received the note

Gary said he could understand if the driver was being unlawfully denied access to her property, however believed that the huge gap provided sufficient space to access the driveway.

He said: ‘We’ve been blocked in before and it’s horrible, you’re helpless, and I would understand how she feels if she were blocked in but in this case there’s no real issue.

The letter didn’t bother Gary, however he said girlfriend Yanee was upset by it.

Gary said: ‘My girlfriend was upset because parking is quite tight around there and she hadn’t seen anyone else’s car with a note on – just ours. She felt a bit bullied.

‘I responded as a ‘driving instructor’ as she tried to make us look silly or foolish and maybe thinks we would intimidated by the threat of a ticket.

‘I wanted to prove a point and have a little dig at her driving. She was trying to school me so I did the same thing back to her.’