While Bannon spoke inside the hallowed union halls, they chanted: ‘The police protect the Nazis!’, ‘Say it loud, say it clear, Bannon is not welcome here!’.

It became violent as 300 outraged protestors gathered in the narrow streets surrounding the historic union building.

They surrounded the police cordon and body-slammed into officers protecting the entrances.

A protester holds a rainbow umbrellas high as she stands close to a police van and is surrounded by supporters, holding placards which say ‘KICK RACISM OFF OUR CAMPUS’ 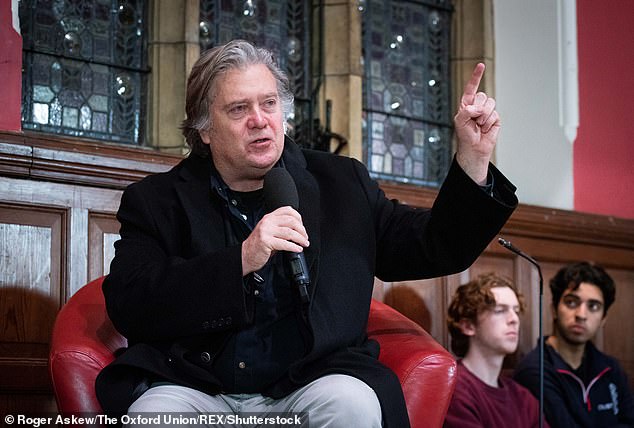 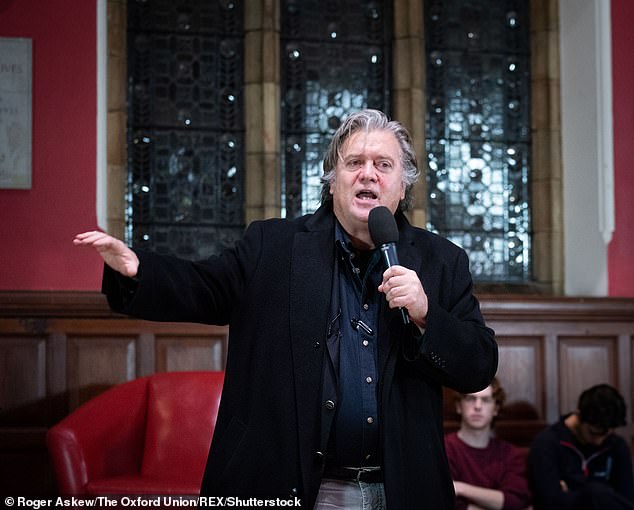 Bannon told the audience ‘Nazis and the KKK have no place in our society, they should have never been allowed to march in Charlottesville’

He is seen by some as the Machiavellian mastermind behind President Trump’s highly controversial and successful Presidential campaigning.

Bannon told the union audience: ‘Nazis and the KKK have no place in our society, they should have never been allowed to march in Charlottesville.

‘The same can be said about Antifa and Black Lives Matter – they shouldn’t be allowed to do what they are doing.’

He said of former NBC host: ‘I said I wanna unchain the dogs on Megyn Kelly and I’m proud of it – politics is war by other methods.’

He also defended the travel ban enacted by the Trump administration, saying: ‘I did the original travel ban, it made our citizens safer. Zero-tolerance at the border is a humanitarian policy.’

Bannon is touring Europe as he promotes a new Brussels-based pressure group called The Movement.

Michael, 20, a history student, said: ‘I really dislike this pattern in the union of people who are chosen to give a platform – because they had Alice Weidel from the AfD (Alternative for Germany) and Tommy Robinson.

‘It gives a platform and legitimises the worst kind of political force.

‘I particularly object to how the YouTube channel broadcast this to a far bigger audience than at the Oxford Union.’

The Oxford Union is a debating society which dates back to 1823 with a long tradition of promoting freedom of speech, but some recent guests have infuriated students.

Maritz, aged 26 years, an Austrian student studying politics in Oxford said: ‘I’m here to protest against the Student Union events being used for right-wing personalities. I am Austrian and we already have a fascist government so it’s important to fight right-wing politics while we still can.’ 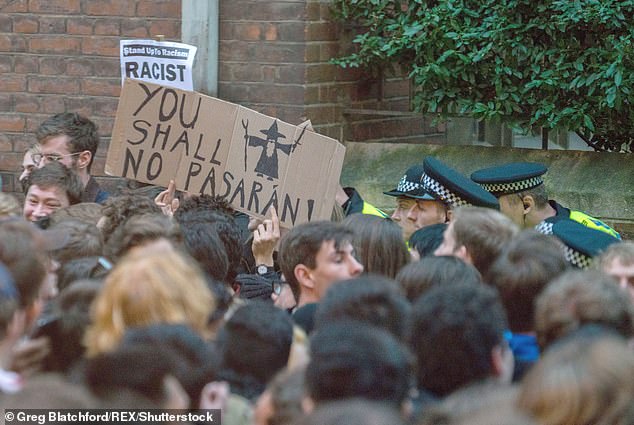 An Oxford student holds a sign which says ‘You shall not pasaran,’ which blends Gandalf’s well-known phrase, with the famous communist speech by Dolores Ibárruri Gómez during the Siege of Madrid by Generalísimo Francisco Franco’s fascist forces in 1936 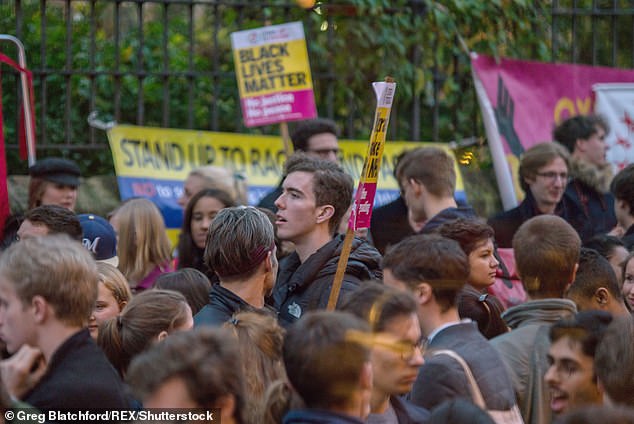 Over 300 protesters were pressed against the railings of the union, one can be seen holding a ‘BLACK LIVES MATTER’ sign

Nick Grant, 65, a member of the Socialist Worker Party said: ‘We are socialists who oppose Steve Bannon quite fundamentally. He is someone who is trying to organize internationally for right-wing political forces which oppose migrants, women, sexual minorities and organised workers.

‘We believe he is a neo-Facist who historically big business organisations turn to at a time of economic crisis.’

A spokesman for Thames Valley Police said: ‘Officers are on the scene of a protest in Oxford. 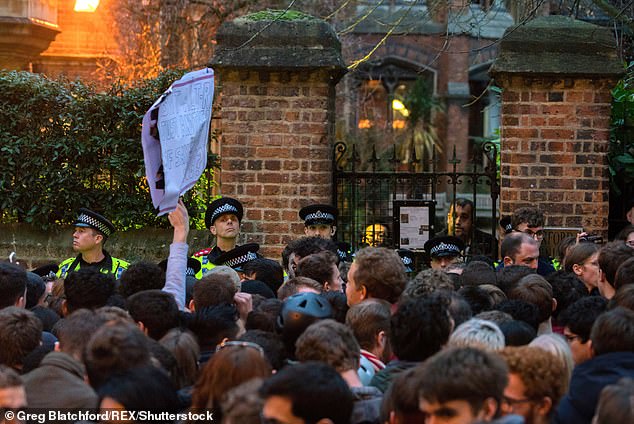 ‘We were aware of planned protest activity around the Oxford Union in St Michael’s Street. Officers are currently in the area working to prevent any incidents of crime and disorder.’

Bannon was delayed in leaving the Oxford Union afterwards by more than an hour as police tried to quell the tempers of the protestors so he could pass safely.

He was greeted in similar style in Edinburgh just days ago as he attended an international media event hosted by the BBC.

Scotland’s First Minister, Nicola Sturgeon, withdrew from the event when she learned that Bannon would be one of the main speakers.

‘These are not racist views,’ he said in Scotland’s capital. ‘In fact populist nationalism, which I’ve been working on for nine or 10 years, is the exact opposite.’

Bannon claimed his brand of nationalism was ‘catching fire around the world.’