Shocking footage has emerged of a truck driver armed with a baseball bat smashing a car window while waiting at traffic lights.

The extraordinary road rage incident unfolded on a busy Sydney road on Saturday when an angry truckie is seen opening his door to lean out of his Kenworth to confront the motorist of a Toyota Yaris stopped next to him.

He bashes the roof and window of the vehicle several times and appears to give the motorist a mouthful before giving the car a final swipe with his bat.

The truck driver’s lane was ending and had needed to merge, according to a shocked passenger sitting in a vehicle behind the chaos who filmed the footage.

‘Another day in Sydney traffic,’ the woman captioned the footage.

She uploaded the footage on TikTok to the Mariah Carey classic All I Want For Christmas, which attracted thousands of views and sparked a divided reaction online.

The incident infuriated motorists and other truck drivers alike.

‘He definitely should NOT be driving a truck,’ one woman commented

A truck driver added: ‘ I drive semis, yes people can annoy you on the road, though this is completely unacceptable, that’s another human being.’

Many viewers urged the woman to hand the footage to police while other mocked the truck driver.

‘Getting into the Christmas spirit,’ one viewer quipped.

Debate raged online over whether the truck driver had the right to be furious.

‘Truck has to give way, all merging traffic does. People need to read the road rules,’ one viewer wrote

One argued: ‘Truck may have to give way but if a car is purposefully speeding up from 50 metres away from the truck merging, the car is at fault.’ 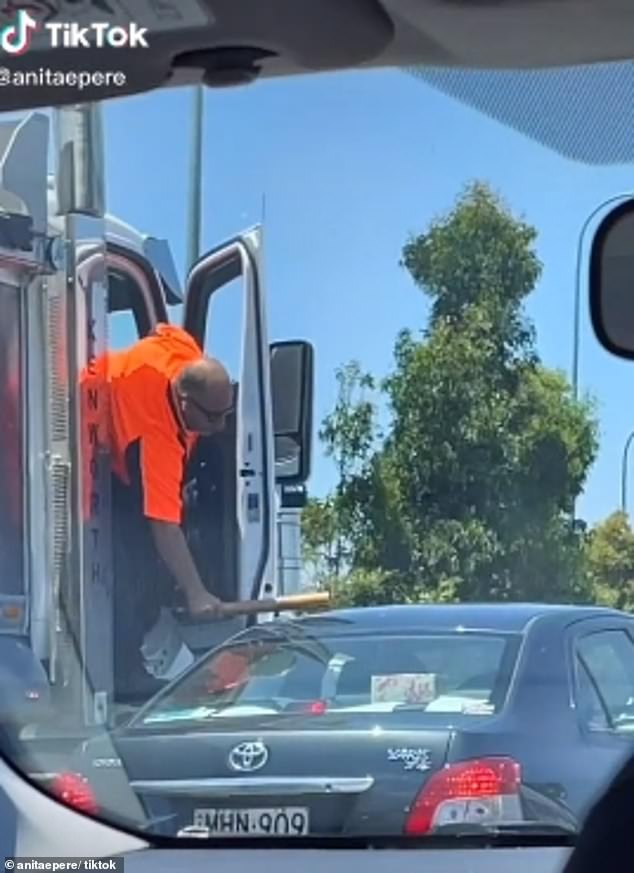 There was some support for the truck driver.

‘People judging the truck driver have clearly never driven in Sydney traffic with the rest of the special citizens who can’t drive in this city,’ one Sydneysider commented.

Another added: ‘Everyone angry at him but forget that some car drivers love to not give way to trucks or merge too close in front of them.’